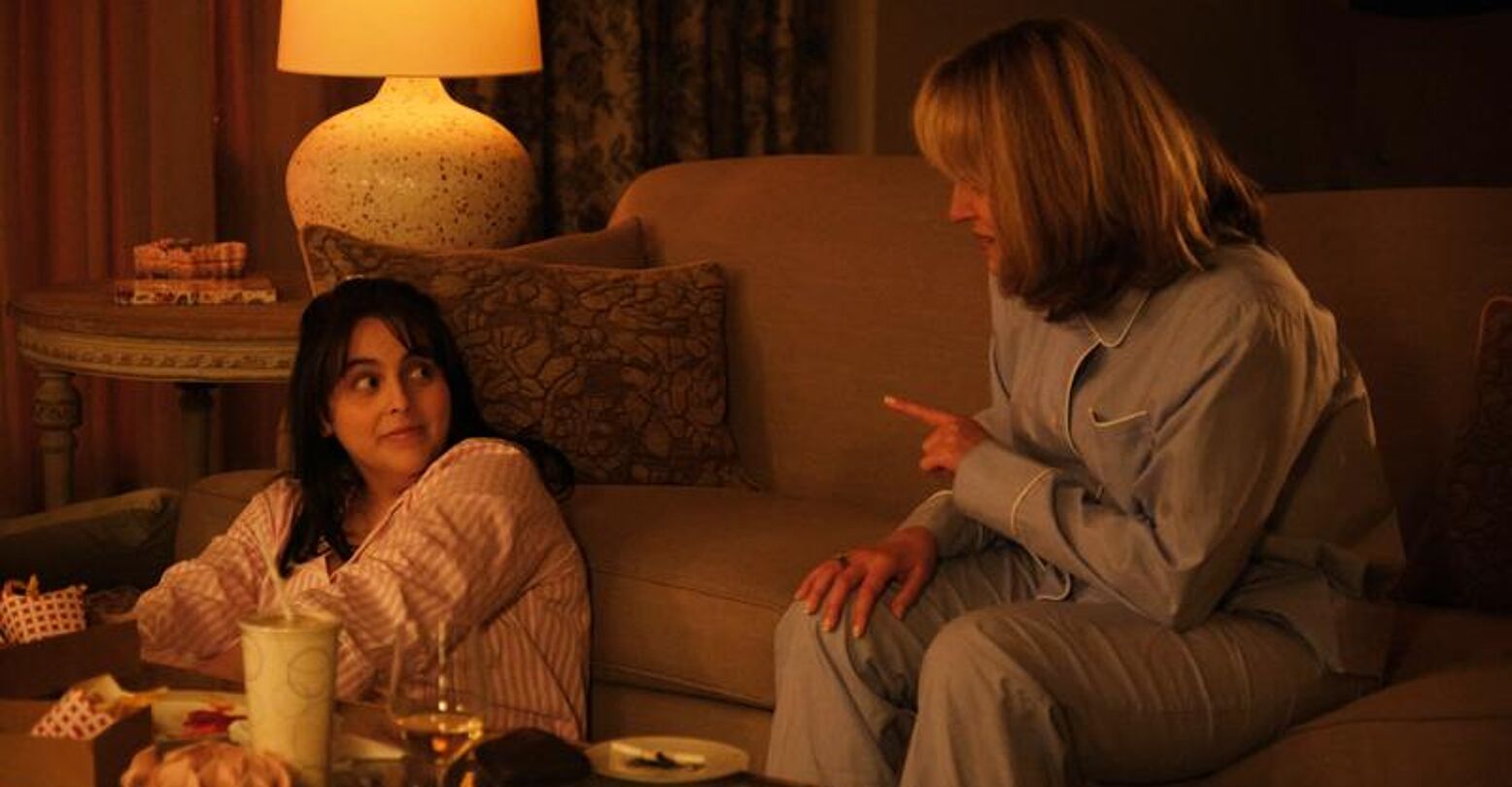 Though Murphy’s trademark mischievousness is applied to dialogue as meticulously as wigs are affixed to Feldstein and Paulson’s heads, Impeachment is more defoliated than previous seasons of American Crime Story. For the most part, viewers already know how this story plays out: there are no winners, particularly where the women are concerned. With bleak fatalism, fedoras, shoulder pads, and surprise femme fatales at every turn, Impeachment often resembles a forties’ film noir more than it does primetime television.

But apart from the series’ women (or uniquely because of them), a tenth presence captivatingly pulls focus: food. This might be a surprise to some, given that D.C.⁠— unlike The People v. O.J. Simpson’s Los Angeles or The Assassination of Gianni Versace’s Miami ⁠— has few culinary claims to fame apart from half-smokes and Mumbo sauce. While neither makes a cameo in this season of American Crime Story, the series does take an extended stroll down the Safeway snack aisle of the nineties, scooping up Slim-Fast and low-fat Yoplait along the way.

“[Food] is so present on the tapes,” playwright and lead Impeachment screenwriter Sarah Burgess recently told Vanity Fair’s Still Watching podcast, referring to the 20+ hours of girl talk with Lewinsky that Tripp recorded illegally and turned over to independent counsel Ken Starr, leading to Clinton’s impeachment for lying under oath about his affair with the former White House intern. (“Please don’t listen to my calls. It’s tremendously inappropriate,” Tripp tells her Pentagon cubicle mate in a clever Chekovian line from Impeachment’s first episode.)

With the release of her tapes to the public in November 1998, commentary on Tripp and Lewinsky surpassed one friend’s betrayal and the other’s sexual proclivities; the women’s once-private conversations about dill and Boston lettuce salads (sans dressing)* became fodder for widespread armchair analyses of their waistlines and appearances. 23 years later, Impeachment spins straw to gold by spotlighting the crueler aspects of this saga ⁠— least of all being the President’s infidelity.

For the most part, viewers already know how this story plays out: there are no winners, particularly where the women are concerned.

There’s much to be said about the restrictive, feminized diet trends of the final decade of the 20th century, from Fabio-endorsed vegetable oil spread to the fat-free Snackwell’s cookies for which women in Clintonian pantsuits once clamored in 30-second television commercials; if one wasn’t Cindy Crawford, it seems, original, full-sugar soda was off the table; the same year that Pepsi recruited the supermodel to down a can in a Super Bowl commercial, Diet Coke pivoted from its original slogan ⁠— “Just for the Taste of It” ⁠— to “One Awesome Calorie.”

“I remember growing up among that. The low-fat stuff was everywhere,” Burgess recalled. “There was just a thudding, constant refrain; it was a screaming message for me as a preteen. There’s just something about those little packages that say ‘low-fat’ and carrying them back to your desk that was tremendously painful.”

Episode by episode, the food artifacts in Impeachment quietly articulate this push-pull between American women, a narrowing beauty ideal, and corporations keen on exploiting the tension. This decade marked by prosperity and low inflation was, like Diet Coke’s new tagline, flavorless; so bland that one can almost see why Linda Tripp, bored of nightly baked potatoes, lived dangerously and recorded her phone calls with a lovesick young colleague. The devil finds work for idle hands; the same should be said for admonished stomachs.

Consider, for example, the television dinner.

In Impeachment’s inaugural episode, titled “Exiles” and written by Burgess, Tripp and Lewinsky have their first ad hoc lunch date in the Pentagon cafeteria, their trays decorated with carrot sticks and lean meats. At one point, Lewinsky freely mentions Weight Watchers’ new frozen dinners to Tripp as the latter hungrily mines her junior colleague for White House gossip. With their lethally symmetrical side dishes, stubborn layers of permafrost, and a piquancy that often lingers after multiple slogs to the microwave, television dinners have never been especially heroic. But there’s something especially macabre about this postwar frozen convenience food ⁠— invented in 1944 during a parallel moment of prosperity and new technologies ⁠— grimly morphing into one to quickly trim by way of gaunt ingredients. Under the spell of pre-9/11 security and possibility, many possessed the means to virtuously purchase starvation.

The food artifacts in Impeachment quietly articulate this push-pull between American women, a narrowing beauty ideal, and corporations keen on exploiting the tension

But this television dinner carton holds more than just mechanically-portioned pasta and vegetables. By the episode’s end, Tripp, who carries herself with such hubris and bravado in public, is not immune to contemporary beauty standards in private. That evening, she heeds little Lewinsky’s trendy dietary advice. Alone at home, each woman, heated television dinner arranged neatly on a place setting before her, is seen peeling back the cellophane film that sags with pearls of nuked Weight Watchers entrée condensation and her own abject unhappiness: Lewinsky with Bill, Tripp with the system that’s permitted him absolute power and her so little.

This moment of post-feminist dissatisfaction is brilliantly compounded by dissatisfying late 20th-century food. Though brief, the sequence guts; prodding viewers to see two vilified women as most have never seen them ⁠— at home, alone ⁠— while also considering how their control over food both overcompensated for and became justified by their professional failures; failures for which, from our current vantage point, neither woman is directly responsible.

“Food felt like a part of identity and the cultural control of women that was landing on them in this very severe way; a way of policing yourself, a way of processing,” Burgess told Still Watching. “It doesn’t escape my notice that two women who felt invisible had these ‘office lady’ jobs where people say Hi, how are you doing? as they walk by your desk, but they don’t mean it because they’re going to see someone who actually matters; the ways that that anger can turn inward.”

“Exiles” is bookended by Tripp leading Lewinsky into an FBI sting at the Pentagon Mall, privileging the women’s lives hours ahead of this moment of legendary disloyalty. The whistleblower stands stooped over her kitchen counter, where she dumps Slim-Fast Ultra powder into a blender; meanwhile, Lewinsky picks up a nonfat latte from Starbucks and heads to a step class. Even death row inmates get to intentionally select their final meals ahead of execution; not so much here.

Paulson, who gained thirty pounds to play the 5’10 Pentagon employee in what she’s called the most challenging role of her career, recently encountered backlash for having supplemented that with five pounds of partial “fat suit” padding. Regardless of where one stands on the use of prosthetics, this discursive moment, not unlike the frenzy over Viola Davis’ weight loss after portraying the blues siren Ma Rainey, undercut a potential conversation about the physical autonomy of actresses, and how weight gain for a role complicates the unfathomable standard of svelteness to which they are often held on-set and off. From De Niro (60 pounds, Raging Bull) to Jared Leto (67 pounds, Chapter 27), men in Hollywood have been trusted with and revered for gaining significant amounts of body fat to embody and probe the humanity of their characters. But there’s something about actresses doing this that still unsettles viewers. Perhaps, with so far to go with undoing fatphobia in entertainment despite Time’s Up’s apotheosis, we don’t quite trust women who have managed to choose muse over muesli; who decide to, in a gesture that borders on homoerotic, live within a woman that society considers lesser; to gain not only mass, but an emotional understanding of what it means to be at the mercy of a body so disparate from one’s own. “I grew up with a lot of big women that I thought were the most beautiful women in the world,” Viola Davis told IndieWire about the process of becoming Ma Rainey. “I wanted that body.”

Revealingly, the word “fat” is rarely uttered in the first seven episodes of Impeachment ⁠— and Tripp and Lewinsky never deign to wield it as a self-deprecatory adjective. Acknowledging their cultural fixation with thinness would oversimplify its relentlessness, never mind deflate the dramatic tension it propagates. Instead, food, low-calorie and not, punctuates the silence as the two transgress what is considered appropriate behavior for women.

We don’t quite trust women who decide to, in a gesture that borders on homoerotic, live within the body of a woman that society considers lesser

Those appalled by Paulson’s padding job might feel differently after seeing the justice she does one of America’s most hated women without an iota of body humor. Linda’s internal conflict ⁠— maternal friendship versus political integrity ⁠— comes to life through an ingenious blend of gumption, self-restrained sadness, and a good dose of annoyance; one half-expects Tripp to slap some sense into her colleague, or “throw a sofa at her to make her catch on” per Bruce Bennett’s suggestion to Lauren Bacall in 1947’s Dark Passage.

Episode four, “The Telephone Hour,” is one of the show’s most gripping and richly performed. Written by Flora Birnbaum (Russian Doll) and named after a number from the musical Bye-Bye Birdie, these 52 minutes, executed largely through phone calls, attempt to make sense of Tripp’s fateful decision to hit record on her friend. As Lewinsky’s desperation about not returning to the White House (like Clinton promised) mounts, Tripp’s anger at his unprofessionalism also meets a fever pitch. During one of the young woman’s myriad inconsolable phone calls ⁠— many of these moments affording Feldstein some of the meatiest dramatic scenes of the 28-year-old’s career ⁠— Tripp grows determined to put an end to his abuses of power. She snuffs out her cigarette in her half-eaten baked potato resolutely and, riffing on noir’s men in a trench coat and her trademark aviators, she ambles into Radio Shack to purchase a tape recorder. Tripp’s future actions do not enter unforgivable territory until she sleeps over at Lewinsky’s apartment. Stoic in her colleague’s pajamas, Tripp listens to her prostrate friend pour her heart out about the older men who’ve caused her anguish ahead of Clinton, bears witness to her self-soothing with French fries and pizza ⁠— from which Linda abstains on-screen ⁠— and still chooses betrayal.

In 1990, right around the time Arkansas native Bill Clinton was running his fourth (soon-to-be winning) campaign for governor and Lewinsky, an adrift Beverly Hills High grad, began attending community college, the actress Lauren Bacall sat down for an interview with Reflections on the Silver Screen. When asked how the decade was different, she did not mince words.

Thirty years on, it is clear that nutritional and cinematic famines of the 90s left us starved for meaty roles; none as great as women were forced to play off-screen during the decade.♦

*The writer sampled Linda Tripp’s Boston lettuce and dill salad for research purposes and found that, with sliced radishes and a proper dressing, it’s not half-bad.

Sarah Fonseca is a writer based in New York City; talk movies with her on Twitter @girlsinmitsouko.