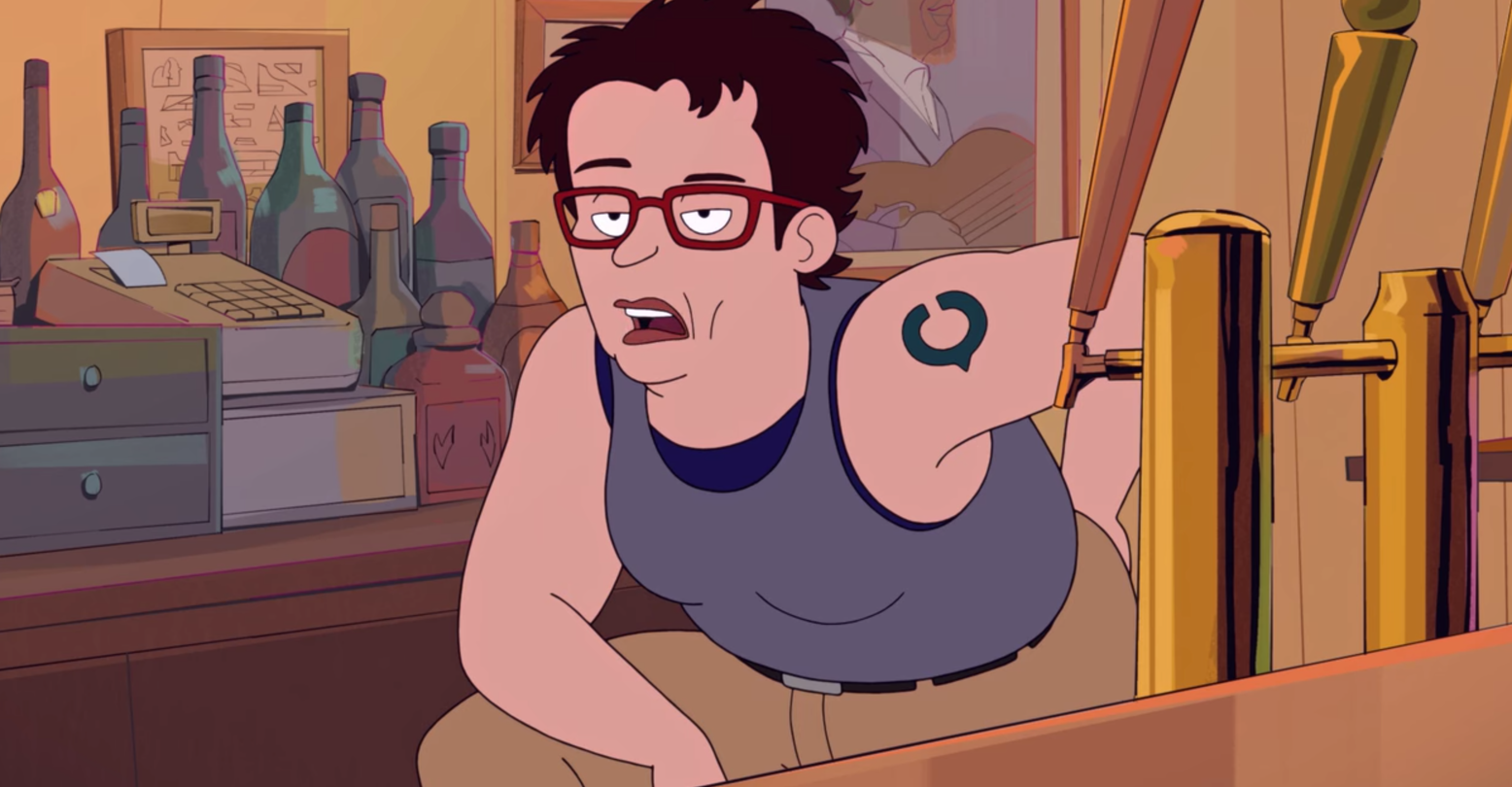 Being queer often means searching for crumbs, literal CRUMBS of representation wherever you can find it. Trust me, I don’t try to be like this: I just am. As a kid, I watched every TV show known to man just on the off chance that there would be a character like me somewhere onscreen.

This has trained me to be a Jedi master of finding hidden and/or secret queer representation. The good news is, this skillset is becoming less and less necessary as shows start to embrace a diverse approach to storytelling rather than opting for a “very special” gay episode now and again.

Case in point? The Barinholtz’s “Chicago Party Aunt,” a Netflix series inspired by comedian Lauren Ash’s Twitter account of the same name. The show concerns Diane Dunbrowski (voiced by Ash,) a rollicking gal-about-town who loves to party and hates being sober. When we meet her, everything in her life is about to be turned upside down: her husband leaves her, her uptight, conservative sister Bonnie decides to sell the family house where Diane has been squatting for years, and she goes into work at the hair salon only to find it’s been purchased by a hipster conglomerate called “Borough.” Her new boss? None other Gideon, a stylish New York City transplant played to perfection by the one and only RuPaul Charles.

It just gets gayer from there: when we first meet Diane’s gay nephew Daniel on his 18th birthday, he’s being passed over in a game of dodgeball in gym class. “Can I pick the janitor instead?” asks one of Daniel’s teammates. “Nope,” says the coach, “you’ve gotta pick Daniel! Thanks, Obama!”

Now if that’s not the most relatable gay-teen-in-a-gym-class scene I’ve ever seen, I don’t know what is!

As the series rolls on, Daniel decides to take a gap year before heading off to college to “find himself.” He does this by moving in with Diane. Soon enough, he’s going on ridiculous adventures with his insane aunt, embarrassing himself in front of his heartthrob crush, and accidentally eating too much of a weed brownie given to him by comedian Andy Richter at the “Beefy Awards.” Basically, Diane is the cool “queer-coded” aunt we all wish we had growing up. She offers a refreshing counterpoint to Daniel’s uptight, probably Republican parents. And most importantly? Diane has queer friends. Like, a lot of queer friends. There’s even a Halloween episode where Diane and Gideon go to a gay bar and she accidentally outs him to his mom over the phone! Don’t worry, she apologizes! And David gets a taste of gay nightlife. Queerness is basically all around this version of Chicago, and it’s very sweet to see. During the Halloween episode, they even play “Get Down Goblin” by butch Chicago icon Jan Terri!

I was super stoked that they played this song in the end credits for the Halloween episode for #ChicagoPartyAunt For anyone who has not heard it here is Chicago music history for you. Jan Terri – Get Down Goblin (Special Treat) https://t.co/DkcAhXL8Tz via @YouTube

Which brings me to my favorite character of all time, Luann the butch lesbian bartender. We don’t learn much about Luann, but dammit if she doesn’t make an impression. Luann is an older butch woman who drinks boilermakers with Diane and acts as her confidante, and something of a chosen family member for her as well. During the especially memorable Christmas episode, Diane and Luann shoot the shit about how Christmas sucks when you don’t have a traditional family. Diane orders an “old style with an egg in it.” When she doesn’t get it, she says, “hey, I wanted a beer nog!” Luann rejoinders with: “oh yeah? Well I wanted to marry Martina Navratilova, and yet I’m not allowed within 1,000 yards of her!”

Now why did this make my tiny gay heart sing SO much? I guess it’s because a character like Luann, even though she doesn’t get a lot of screen time, is deeply important in terms of how she gets to represent queerness. This is a minor character (IMDB doesn’t even list the voice actor!) in a show that’s not actually queer, and yet she still gets to be honest about her life and queer desire, even to the point of making an “I stalked a famous lesbian tennis player” joke. In the past, it would have been enough for a character like Luann to simply look like a dyke without necessarily talking about it. Today, in the year of our lord 2021, Luann gets to be as explicit about her life as she wants to be.

Maybe you think I’m reading too much into this. But think about it: characters like Luann and Gideon don’t have to be sidelined anymore. We can enjoy their queerness and camp value while also getting an honest look into the complex issues they have to face as queer adults. We get to see Gideon struggle on a date and deal with being outed. We get to see Luann living the life she wants and talking about her same-sex desire as if it’s no big thing, because it’s not. These characters don’t just make the show better and more lived-in, they play an in-narrative function as well. Since “Chicago Party Aunt” is a coming-of-age story disguised as a sitcom, it’s important that Daniel, our queer teen lead, gets to engage with these characters, too. It shows him that there’s a world outside of his horrible conservative parents and aggressively straight high school culture. It shows him that gay life is so much more than what we usually see on TV. It’s everywhere. And in “Chicago Party Aunt,” that fact is on wonderful display.