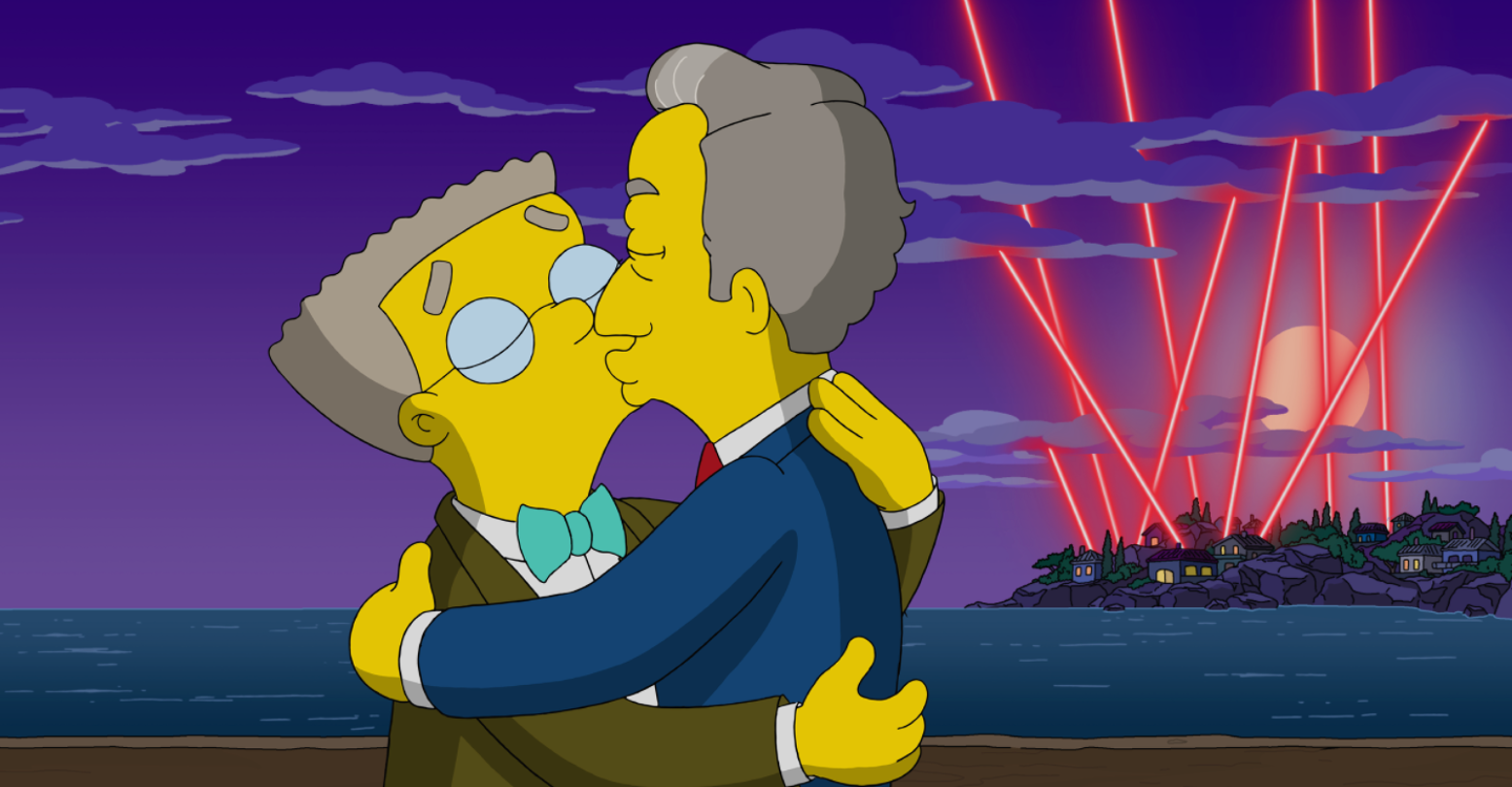 If you haven’t been turned onto “Gayest Episode Ever,” allow me to explain its life-giving properties: each week, Drew Mackie and Glen Lakin walk listeners through the gay episodes of classic TV (which often happen to be the “very special” episodes.) Whether we’re learning about Frasier entering a gay bar in tiny shorts or Elaine from “Seinfeld” trying to “convert” her gay friend, each episode provides massive insight into how the mainstream (hetero) culture viewed queer life in the 70s, 80s, 90s, and even the 2000s. The show is, in fact, so impactful that it’s already had a hand in making some changes for the better on one of their most often-discussed subjects, “The Simpsons.”

Last year, near the start of the pandemic, Mackie created a 2-hour-long supercut of every last gay joke on that show, and boy was it eye-opening. The video allowed us to see how queer people went from being a joke to a point of anxiety in regards to Homer’s relationship with Bart, to taking up more meaningful space on the show via the “comings-out” of Smithers (he doesn’t actually come out) and Marge’s sister, Patty. There’s even a John Waters cameo episode!

That was just the beginning: in the nearly two years since, “Gayest Episode Ever” has been responsible for helping snag friend and longtime GEE guest Tony Rodriguez a role on the show as Julio, a gay Cuban-American character who was previously…not voiced by a gay Cuban-American actor. But that’s far from the end of it: the mission to make “The Simpsons” better is picking up speed, thanks to Lakin and Mackie’s ability to lovingly call out the show for some of its truly hideous representations of queer and (specifically) trans people. Last season, me and my cohost Ada-Rhodes Short were invited on the show to discuss a particularly hideous episode. “There’s Something About Marrying,” which concerns Patty dating and becoming engaged to a trans woman who is something of a Renee Richards knockoff, is full of transmisogynistic violence, and we had a good conversation about how the current writers of the show could do more to promote a fully fleshed-out view of queer and trans folks living in Springfield.

Well lo and behold, ahead of the announcement that Smithers, the long-suffering aide to the evil Mr. Burns, would finally get a boyfriend, Mackie and Lakin were approached by the “Simpsons” team to pre-view the episode and speak to its writers: the father and son team of Rob and Johnny LaZebnick.

The episode gives listeners a look into the making of “Portrait of a Lackey on Fire,” in which Smithers finds a mate in Michael de Graaf (the one and only Victor Garber.) Johnny LaZebnick, who is the gay son of Rob LaZebnick, spoke about bringing in the smaller details that make the show actually nod to the queer experience instead of superficially using queerness as a funny detail (for instance, you don’t “swipe” on Grindr.) Mackie took a moment, before the start of the episode, to say that “10-year-old me” would be amazed to know that in the future, “The Simpsons” would reach out to ask him to preview an episode where Smithers gets a hot dream boyfriend. “10-year-old me would be surprised to learn what podcasts are and also that he is gay, but the whole Simpsons aspect would still win out.” Mackie explained.

Speaking to Rob LaZebnik, Mackie and Lakin talk about the ways in which the show hasn’t been the best ally to queer and trans people while also appreciating the show’s rich, campy history and finding ways to bring that energy into the 21st century. “I was just excited to talk to writers about a great episode of TV,” Lakin told INTO. “The LaZebniks pack an entire romcom into one 22-minute episode — and the gay character is the lead.”

It’s not just that the episode is campy, hilarious, and features Christine Baranski: it’s a powerful example of legacy shows actually listening to criticism and using it to make better art. “This current season of “The Simpsons” is solid in ways that would really surprise people who haven’t been watching in the last two decades,” Mackie told INTO. “I think the reason it’s been so good is that the people making it have a lot of reverence for the show and appreciate the unique spot it occupies in pop culture. And this new Smithers episode is an example of that: understanding what the show did with Smithers back in the day but also moving forward into areas we wouldn’t have imagined way back when.”

Here’s hoping other shows follow the same route and keep giving us reasons to keep watching.