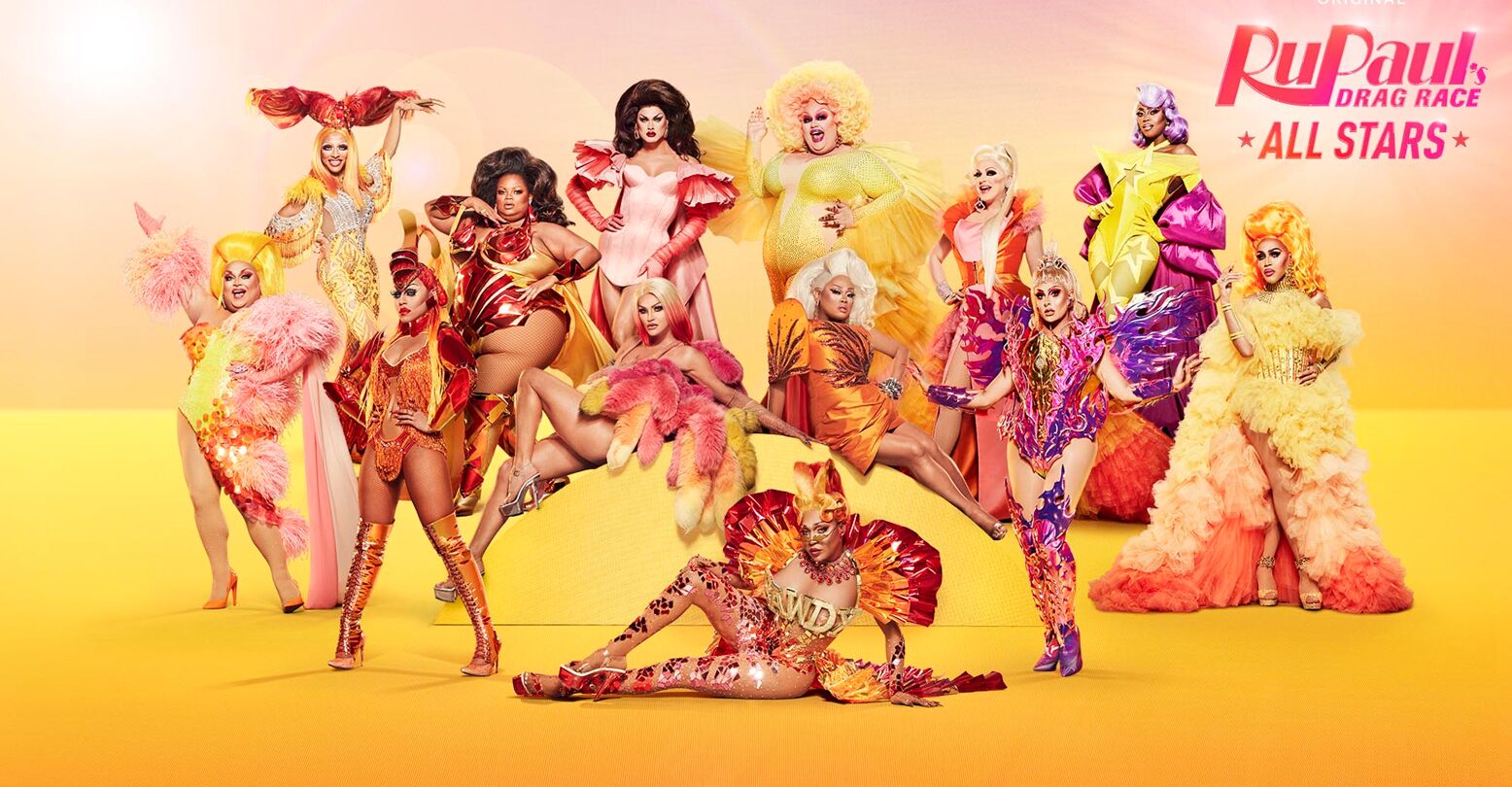 Spoilers for RuPaul’s Drag Race All Stars Season 6 Below!

Well folks, “Drag Race” is back, and in a big way. Welcome to the INTO RuView, where we’ll be recapping “RuPaul’s Drag Race” week by week. The newest season of All Stars, which hit Paramount+ this morning at 3 a.m. EST, premiered with two episodes at once, so there’s a lot to cover. With no further ado, let’s get into the first episode.

This season saw a record high number of all stars with 13 queens to its name. Competing on this season are A’keria C. Davenport, Jiggly Caliente, Jan, Ra’Jah O’Hara, Ginger Minj, Yara Sofia, Silky Nutmeg Ganache, Pandora Boxx, Scarlet Envy, Serena ChaCha, Kylie Sonique Love, Trinity K. Bonet and Eureka! (yes, it’s now stylized with an exclamation point). No one is a true booger, but there were definitely standouts in terms of entrance looks — on the top and the bottom of the spectrum.

Silky wasn’t exactly the runway queen of Season 11, but here, she’s exemplifying what All Stars is all about: taking the amazing things you’ve done before and making them even better. This is her original entrance look revamped to the max, and goddamn, she looks good — her cookie even got an upgrade, with a miraculously unspilled glass of milk to boot.

Now, Ginger. We love you. But you know this is a mess. You even admitted to it on Twitter, writing that this outfit “is intentionally ‘ugly’ because when you see a toad your initial reaction is ‘eww’, but when you look beneath the surface you realize how beautiful they really are.” Ginger, I swear I’m looking beneath the surface — there’s not much beauty to be found.

Before the season can begin in earnest, RuPaul shocks the girls with the season’s first twist: a secret fourteenth queen! Who could it be?? Ohmygod, it’s … Miss Piggy. Well, she’s certainly a fun addition to the judging panel, so who are we to complain?

Now that the HMIC (Head Muppet in Charge) is in residence, the queens can get into the staple first mini challenge of an All Stars season: the reading challenge. There were a few hilarious one-liners and a lot of dead air. Here’s the best of the best:

And the winner of the reading challenge is … Ginger Minj! Deservedly so, in my opinion. She had no real competition among this bunch.

With that, the season’s first maxi challenge is announced. It is, of course, the All Star Variety Show. Each queen must present an original talent act that will wow the judges.

As the queens got ready, Ra’Jah remarked on the diversity in the room, which features a record number of transgender and plus size queens competing on a single season, while also being a majority POC cast. “This is a group of badass bitches, let me tell you,” she said. “We are so diverse. Representing POC the house down. We have transgender women in this competition. We also have full-figured, body positive queens. But most of all, I see talent, talent, talent.”

Speaking of talent, the variety show consisted primarily of girls doing pretty standard routines to original club tracks, which, while entertaining once, gets old fast when almost everyone is doing it. A few queens did stand out, though not always for the right reasons.

Ra’Jah took a page out of Bianca Del Rio’s book and sewed a full dress onstage in just one minute. Now that is undeniable talent, not to mention a super valuable skill for a drag queen.

Yara did perform a song, but she took it to the next level by camping up the performance with outlandish breastplate antics, leaving the judges in stitches.

Less impressive was Serena, who tried to turn her infamous wig business into a talent with a half-baked cha-cha performance. Unfortunately, she couldn’t live up to her namesake.

Trinity was also disappointing as she tried to create a sequel to her stand-up performance from Season 6. Reusing old jokes while stumbling over most of them is a recipe for the bottom two.

Pandora joined Ra’Jah and Yara in the top, while Silky rounded out the bottom three. Ultimately, Serena and Trinity were up for elimination while Yara was named the top all star of the week. The judges praised her performance: “It was so stupid, and stupid is good on the mainstage of ‘RuPaul’s Drag Race,’” said Michelle Visage. Personally, I would’ve given Ra’Jah the win, but Yara was just as entertaining. (Ra’Jah’s my pick for the overall season winner. You heard it here first.)

The format from All Stars 5 is back, in which the top all star lip-syncs against a secret lip sync assassin for $10,000 and the power to eliminate a bottom queen, while all the other contestants vote for who should go home in the event the challenge winner loses the lip-sync. Yes, it’s convoluted, and no, I can’t explain it further. Sue me.

Deliberations this episode were pretty run of the mill: both Serena and Trinity were desperate to stay, had so much more to prove, you know the drill.

When Yara returned to the mainstage, she was faced with the first lip sync assassin of the season: Coco Montrese. Now that is an assassin to be reckoned with. Last season, a few of the assassins left a bit to be desired — this season is off to a good start, so let’s hope they can keep up the momentum.

Yara and Coco lip synced to “Uptown Funk” by Bruno Mars. I felt like I was smack dab back in 2014. But also, yes to more male artists being lip synced on “Drag Race”! I’m so over the notion that queens can only perform to female vocalists when the whole point of drag is to upset the gender binary, thank you very much.

During the lip sync, Yara’s titties were tittying as hard as they could, but you simply can’t touch Coco. She won, revealing that Serena ChaCha is the first eliminated queen of the season. ChaCharinas, this is a dark day. I’m praying for you all.

Before she officially left the werkroom, Serena got a message from Ru hinting that there may be a chance for her return. Could this be tied in with Ru’s near constant refrain that this season is “a game within a game”? Only time will tell. But also, like, definitely yes.

Anyway, that’s only the first helping of “Drag Race” we got tonight. Luckily, we’re always hungry for more. Y’all buckled up? Let’s ride.

The season’s second episode kicked off by revealing last week’s votes. Literally everyone voted for Serena to go home, except for Serena … and Yara. Had she won the lip sync, Trinity would have been sent packing. Yikes! Let’s hope Trinity (and the audience) doesn’t hold a grudge.

When the queens entered the werkroom the next day, they gave much needed clarification to the criminally overused term “trade.” Nowadays, people will throw it around to refer to any cute guy, but as A’keria pointed out, trade historically meant “a masculine looking gay guy,” and, as Jiggly added, “trade is that slight bit of danger, too.” Language may evolve beyond repair, but sometimes, it’s nice to remember the roots of our queer vocabulary.

RuPaul then introduced this week’s maxi challenge. Episode 1, there was no runway category. This time, the show more than made up for it by throwing a ball! A Blue Ball, to be exact. No, not that kind, get your mind out of the gutter.

The challenge called for three blue-themed looks: Blue Betta Werk, “a blue collar working girl look”; Blue Jean Baby, “a look that takes denim to the next level”; and Blue Ball Bonanza, an original look constructed from unconventional materials that just happen to be blue. Now, with 12 girls remaining, that means there are a whopping 36 runway looks in this episode — so let’s just dissect the best and the worst of each category.

Kylie understood the assignment: taking an everyday job and making it ~fashion~. She’s a fierce handyman with a Miley mullet. What’s not to love?

Trinity’s usually a runway girl, so … I don’t know what happened here. It’s literally a crossing guard outfit. Those are straight-up khakis. Is there even a heel??

The category is … Blue Jean Baby

Kylie is Y2K everythinggggggg. The Christina wig is so, so correct, the trans flag is as gorgeous as it is powerful, the underboob is perfectly coy. Winner energy!

No one was horrible in this category! Jiggly’s was simply the most pedestrian, and was especially underwhelming considering we saw Symone’s elevated take on the same silhouette last season.

The category is … Blue Ball Bonanza

Okay LISTEN. I promise I’m not some deranged Kylie stan. She simply ate every single time she hit the runway! I mean, come on, this Britney and JT star-spangled fantasy made my early aughts heart so happy. And she made it. Talent!

Jiggly’s never been known for her original fashions — well, she has, but not in a good way. This is definitely a step up from baked potato couture, but it’s still a step down from everybody else. The whole ensemble gives very arts and crafts. At least that mug is BEAT.

Eureka and Ra’Jah placed with Kylie in the top three. Can you guess who I think deserved the win? Kylie, for some reason, didn’t get named top all star this episode — it went to Ra’Jah instead. Now, I am Team Ra’Jah and I’d rank her runways near the top of every category, but come on. Kylie was right there.

Jiggly, Yara and A’keria were named the bottom three, with Yara and Jiggly being up for elimination. This happens on almost every All Stars season, that a winner from the first week will land in the bottom the next — this time, the victim was Yara.

Yara decidedly had better looks than Jiggly, but in deliberations, Jiggly had wayyy more fire to stay in the race. Yara pulled out the classic excuse of not wanting to beg — if you’re not willing to beg for your spot, you’re in the wrong competition.

Ra’Jah had to face her Season 11 sister Brooke Lynn Hytes in the lip sync. Thank you, production, for bringing in another legendary lip syncer! Brooke and Ra’Jah are both absolutely iconic performers, so it’s no surprise that their lip sync to “Miss You Much” by Janet Jackson was a showstopper.

And the winner is … both? It’s a tie. RuPaul sure loves a tie. I can’t say they didn’t deserve it, but it’s anticlimactic nonetheless, particularly as it didn’t even result in a double elimination. No, both Brooke and Ra’Jah revealed Jiggly’s lipstick, sending her packing.

I’m sad to see Jiggly go — I feel like she had so much more to show, though maybe not in the fashion department. Of course, she also received an ominous RuPaul message in the werkroom. What could it all mean? Surely not a convoluted reality TV twist? On this program? Never.

Whew! What a premiere. This cast is shaping up to be one of the best yet, precisely because there’s no clear runaway winner or production darling. I have no clue where the season could go, but I’m happy to see my girl Ra’Jah killing it out the gate. As RuPaul once said, I can’t wait to see how this turns out.