A-list stars like Tom Hanks, Charlize Theron, and Sean Penn have all won Academy Awards for playing LGBTQ roles, but none of them are queer themselves. Progress was made last year when Moonlight became the first LGBTQ movie to win the Oscar for Best Picture, but once again, most of the cast was predominantly straight. While it’s empowering to see our stories finally receive some of the accolades they deserve on screen, Hollywood still seems reluctant to provide LGBTQ actors with the same opportunities as their heterosexual peers, avoiding authentic portrayals of queerness in film.

However, such erasure will soon be pushed to the wayside by a new movie from Joel Edgerton, appropriately titled Boy Erased. Based on the book of the same name, this early Oscar contender follows the real-life story of Garrard Conley who was pressured into gay conversion therapy at a young age. Russell Crowe and Nicole Kidman lead an impressive cast alongside Lucas Hedges in the main role, but that doesn’t mean Boy Erased is purely a heteronormative affair.

Joining this central trio are a number of out performers who have each created their own significant bodies of work that explore the queer experience. Chief among these is Xavier Dolan, an accomplished French-Canadian filmmaker who took the arthouse world by storm when he directed, produced, wrote and starred in his first feature at the age of 20. Australian pop star Troye Sivan will also appear in Boy Erased as another queer patient forced to deny his sexuality in the eyes of God. They’ll both be joined by Cherry Jones, a Tony Award-winning star and David Joseph Craig, a comedic writer and actor who previously worked with director Joel Edgerton on The Gift.

When the film adaptation of Boy Erased was first announced, there were concerns that a straight director like Joel Edgerton couldn’t do justice to this intrinsically queer story, something that is particularly important given the sensitive subject matter. At the time, additions to the cast like Dolan and Sivan hadn’t been announced yet, so these fears weren’t entirely unjustified. After all, representation matters, breaking down stereotypes and social barriers alike for both straight and queer audiences. Botched opportunities like Roland Emmerich’s Stonewall have proved this need time and time again.

Rather than simply ignore such criticisms, Conley actively addresses them on his website, breaking down the reasons why Edgerton is, in fact, the perfect man for the job and how he didn’t actually take this story away from another LGBTQ director. The truth is that no one else had even shown interest in the material before him, and by involving Conley every step of the way, Edgerton fought to ensure that the authenticity of the story would shine through in the final product. Conley insists that his story “is not being straightwashed” and it’s hard to argue with the man who actually lived through the events depicted in the memoir that the film is based on.

However, despite the fact that Conley is “committed to ensuring that the sensibility of the film and much of the cast is queer,” there have also been objections online regarding Hedges’ portrayal of him in the lead role. After all, casting the likes of Dolan and Sivan in a potentially award-worthy film like this is a huge step forward, but does any of that matter if the lead himself is straight? Detractors might argue that if anyone in the young cast is going to receive recognition during awards season next year, it’s likely to be Hedges. 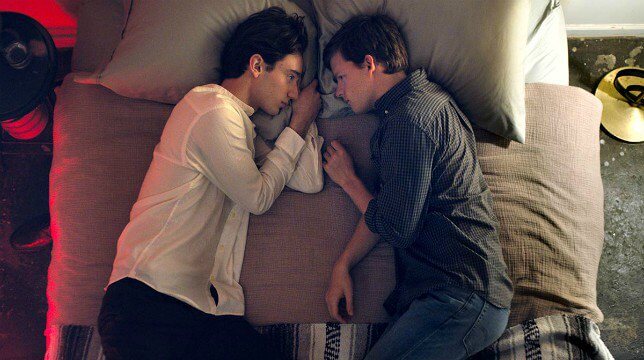 The truth of the matter is that Hedges’ sexuality is unclear. Conley himself admits that he has never asked Hedges what his orientation might be and rightly so. Such questions are hugely invasive, particularly for someone like him who now lives in the spotlight, and as Conley says, “All human lives deserve to be treated with dignity.” What the author does know is that the young star “is meant to play this role. He understands my story, and I have a gut reaction to what I sense will be a fantastic performance.”

It’s easy to see why such casting might still infuriate some people. In a study conducted by Williams Institute in 2013, it was found that 53 percent of LGBTQ interviewees believed that Hollywood directors and producers are biased against queer performers and it’s clear that straight men are still more readily awarded for playing gay roles than gay actors are for the same part. Typecasting is a real issue too and while queer roles shouldn’t necessarily be played exclusively by queer performers, LGBTQ actors deserve to be prioritized until equality is finally reached.

Whether Hedges is straight or not though, the fact that Edgerton has assembled a predominantly queer cast to bring these LGBTQ characters to life is still an admirable feat and one that will hopefully become the norm one day. So far, no actor has even won an Oscar while out of the closet, and even if the likes of Dolan or Sivan aren’t considered this time around, their inclusion in Boy Erased might help this become a reality in the future.

During an interview with Mic, Conley revealed that a number of gay men from around the world emailed him after the trailer for Boy Erased was released online, explaining that gay conversion therapy had led them to consider suicide. Instances like this remind us exactly why films like Boy Erased are so important and how authentic representation on screen can genuinely inspire the LGBTQ community at large.