Every year, studios and networks try to cash in on the annual holiday film craze. Americans love nothing more than Thanksgiving and Christmas-themed movies, many of them feel-good familial tearjerkers or romantic comedies rife with meet-cutes, misunderstandings, and kisses under the mistletoe. Lifetime, Hallmark, and Freeform (formerly ABC Family) all create original programming for this time of year, playing the movies over and over during November and December.

Yet despite the hundreds of new holiday-themed projects made every single year, there are few that center on or prominently feature same-sex couples. This year, Freeform has only three new original films in its 25 Days of Christmas; Hallmark has made 232 holiday films total, 37 new for 2018; and Lifetime’s 14 new films have only one with a gay character. It doesn’t appear that any of the major films hitting theaters or streaming sites — The Grinch, The Nutcracker and the Four Realms, The Holiday Calendar — have LGBTQ themes or storylines, either.

So despite a rise in LGBTQ characters in television and film over the last few years, it appears queer and trans people are still, by and large, left out of the holiday film genre; one that is ostensibly looking to serve comforting happy endings that, if they’re worthy, are returned to year after year. The star-studded Love, Actually is one such example — one that originally had an elderly lesbian couple that was left out of the final cut, only appearing as part of the DVD extras. Instead, they kept in the homophobic jokes between Billy Mack and his assistant, Joe (“Ten minutes at Elton John’s, you’re as gay as a maypole!”)

There are some queer-themed holiday films — see: the adaptation of Rent, The Family Stone‘s interracial gay couple, the Christmas-set Carol, and What’s Cooking, with Kyra Sedgwick and Julianna Margulies as a partnered pair — but they are few and far between. LGBTQ viewers are continually frustrated by the lack of quality content created for and about them, or at least attempting to reflect their lives on screen at a time of year they, too, experience.

Pop culture critic Dana Piccoli has been campaigning for networks like Hallmark and Lifetime to be inclusive for several years. More recently, she’s been leveraging Twitter and her following of queer women who eagerly consume queer content to ask why LGBTQs aren’t considered when it comes to holiday films.

“It’s part of popular culture that our community is pretty much excluded from,” Piccoli tells INTO. “Each year when these networks roll out their long list of holiday romances, queer people aren’t included. We’re talking dozens of movies, with no queer characters or storylines. I love holiday movies and I’m not alone — lots of LGBTQ people do. Who doesn’t like quaint, snowy towns and meet-cutes? We are just missing from the narrative.”

If Lifetime and Hallmark won't give us a lesbian holiday romcom, what about you @netflix or @hulu? pic.twitter.com/w4URnlfRqd

Despite her efforts, Piccoli says she doesn’t get responses from the networks. A representative for Hallmark did not respond to INTO‘s request for comment, but Lifetime provided a statement from Michael Murray, whose film Christmas Around the Corner premieres on the network this December. The movie stars Hilarie Burton, Robert Buckley, Danneel Ackles, Tyler Hilton, and Antwon Tanner, and a gay couple have small roles as part of the lead character Claire’s storyline.

“I’ve done a lot of rom-coms and holiday movies, but I’ve never been able to include a gay character or gay family in any of them until now,” Murray told INTO via email. “I was delighted that Lifetime backed me up when I delivered the first draft of the script and it included a gay couple, Fr. Luke, an Episcopal priest, his husband, Aaron, and their newborn, Mabel. It may seem like a small thing, but it was a huge thing for me. “

There was also a small role for a gay brother in the Freeform (then ABC Family) film Holiday in Handcuffs, Robert Downey Jr.’s gay brother character in 1995’s Home for the Holidays, and the 2009 indie Make the Yuletide Gay followed Degrassi star Adamo Ruggiero’s character coming out during Christmas, but there has yet to be a holiday film that centers on an openly lesbian protagonist.

“I think these networks are afraid that they will receive backlash,” Piccoli says. “It would normalize our experience  — falling in love, drinking eggnog, etc. — and that’s something that people who don’t like us are afraid of. “

Filmmaker Jenna Laurenzo wants to change that. With her new film Lez Bomb coming to theaters and VOD Nov. 9, Laurenzo stars as a fictional version of herself — a gay woman who wants to come out to her family. Only this story takes place during Thanksgiving. It’s an ensemble comedy co-starring Cloris Leachman, Steve Guttenberg, Bruce Dern, Kevin Pollak, and Deirdre O’Connell as members of the New Jersey-based crew, all of whom are clueless about Lauren’s (Laurenzo) “friend” being much, much more. It’s Meet the Parents meets National Lampoon’s Christmas Vacation.

“I really wanted to make a movie that I wanted to see but couldn’t find,” Laurenzo tells INTO. “I really loved those dysfunctional family comedies that I always wanted to watch on the holidays. I was always a sucker for those movies I can watch over and over and over again, every holiday with the family, and I just felt like lesbians didn’t really have that. And so I wanted to make this a movie that I felt like families would enjoy pressing play around Thanksgiving and watching it in their living room comfortably and laughing together.” 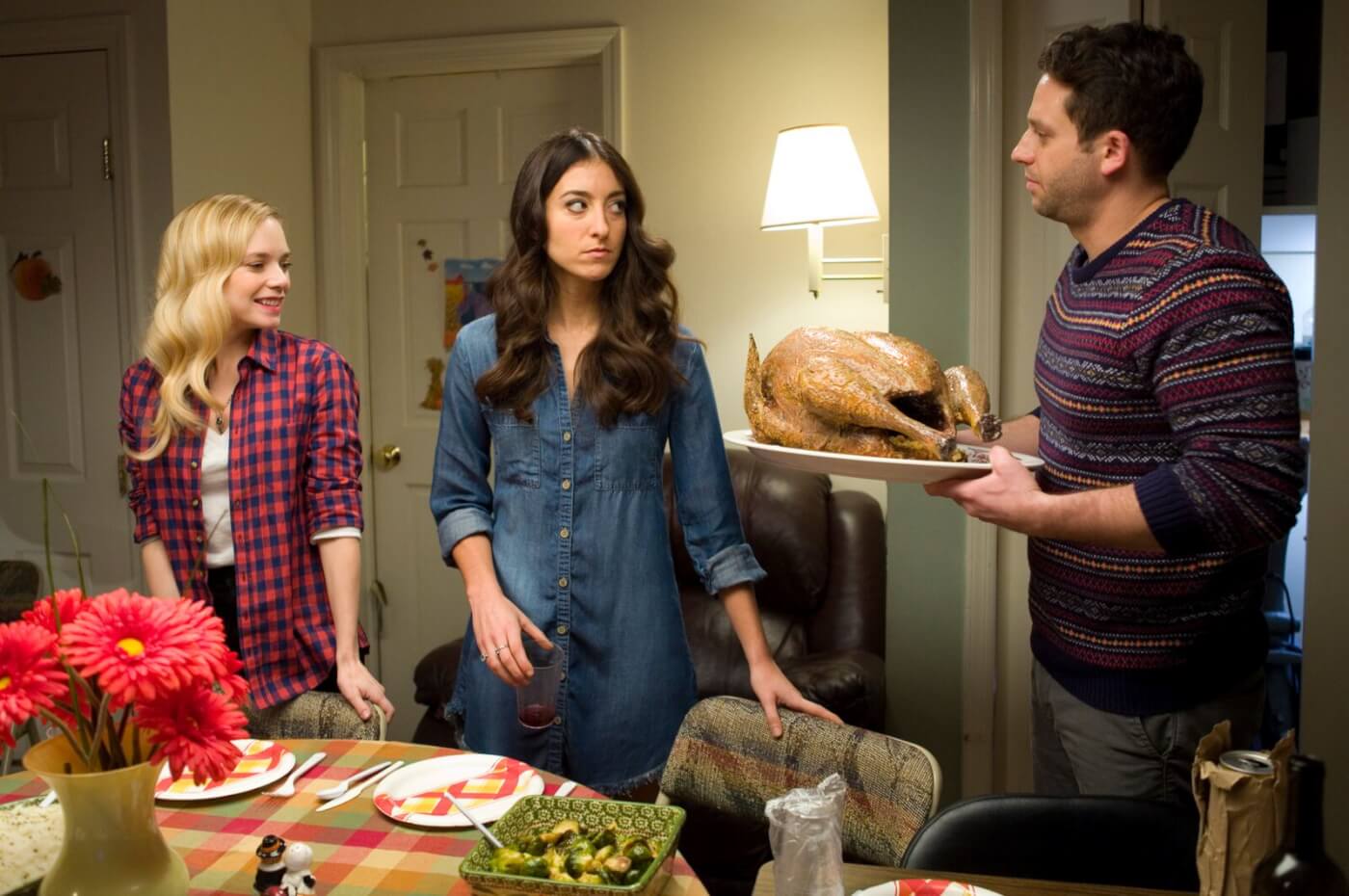 Bobby Farrelly (There’s Something About Mary, Dumb and Dumber) served as executive producer on Lez Bomb; his daughter, comic A.B. Cassidy, appears in a bit part opposite Guttenberg and delivers some hilarious moments outside Laurenzo’s mother’s real-life motel. The film was also shot inside of Laurenzo’s family home, but that’s where any elements of autobiography end — she didn’t really come out to her family during Thanksgiving. Instead, she used the idea as a catalyst for the film she wanted to see and ultimately had to make.

“I feel like coming home for the holidays, it’s this universal understanding that people get anxious when they come home, and they’re around their families and there’s all this pressure to be a certain version of yourself that your parents expect from you,” Laurenzo says. “And I think that coming home and coming out with any news, even sexuality aside, there’s this certain pressure.  I loved the idea of having to come out of the closet with the anxieties of the holiday set up against it as a backdrop.”

Laurenzo worked on Lez Bomb for six years before she was able to find funding, which she credits to releasing her short film Girl Night Stand online and being able to show potential investors the kind of engagement lesbian-themed films can receive.

“When that went viral, conversations with investors was a bit easier because I could demonstrate audience numbers and be like ‘This is an audience and an audience that wants a comedy and a happy ending,'” she said. 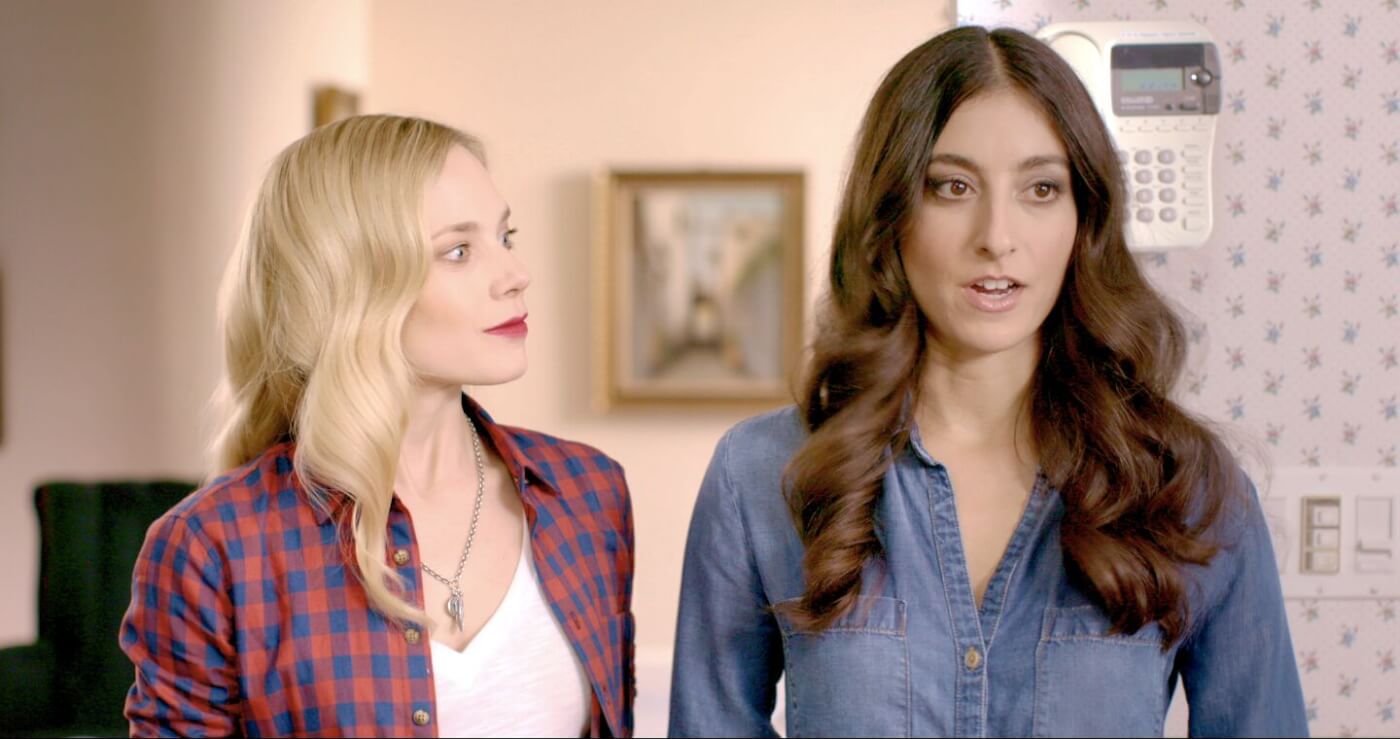 Piccoli says she loved Lez Bomb and has been encouraging other queer women to see and support the film.

“It has all the elements you want in a holiday movie: quirky family, ladies in love, turkey troubles. It’s well written and wonderfully acted,” Piccoli said. “Thanksgiving is the quintessential holiday for those of us in the states, and it represents family, love, and acceptance. I think setting Lez Bomb at Thanksgiving rather than another holiday really emphasizes that.”

“I kept saying, ‘I can’t think of a lesbian holiday comedy. I would just like love to do this. I would love to make this. This is the movie that I so crave and I would love to give it to others,'” Laurenzo says. “Hopefully people will come back for more every year and be able to enjoy it in a perennial way.”

The star power should help. With recognizable actors playing roles, as in Hallmark and Lifetime films, Laurenzo is also hoping to find more viewers to prove that LGBTQ-themed films don’t mean small audiences. (For the record, Carol  made $43 million at the box office, and The Family Stone made $92,283,851 worldwide.)

“With Lez Bomb, what I really wanted to do was create a story that felt close to home,” she said. “And by leaning into that nostalgia, the family film, I want it to feel familiar and accessible and hopefully the comedy is an active point for those who might not embrace the storyline. Hopefully it’s an active point in, get them laughing and then hopefully that expands their compassion and empathy and understanding as well.”