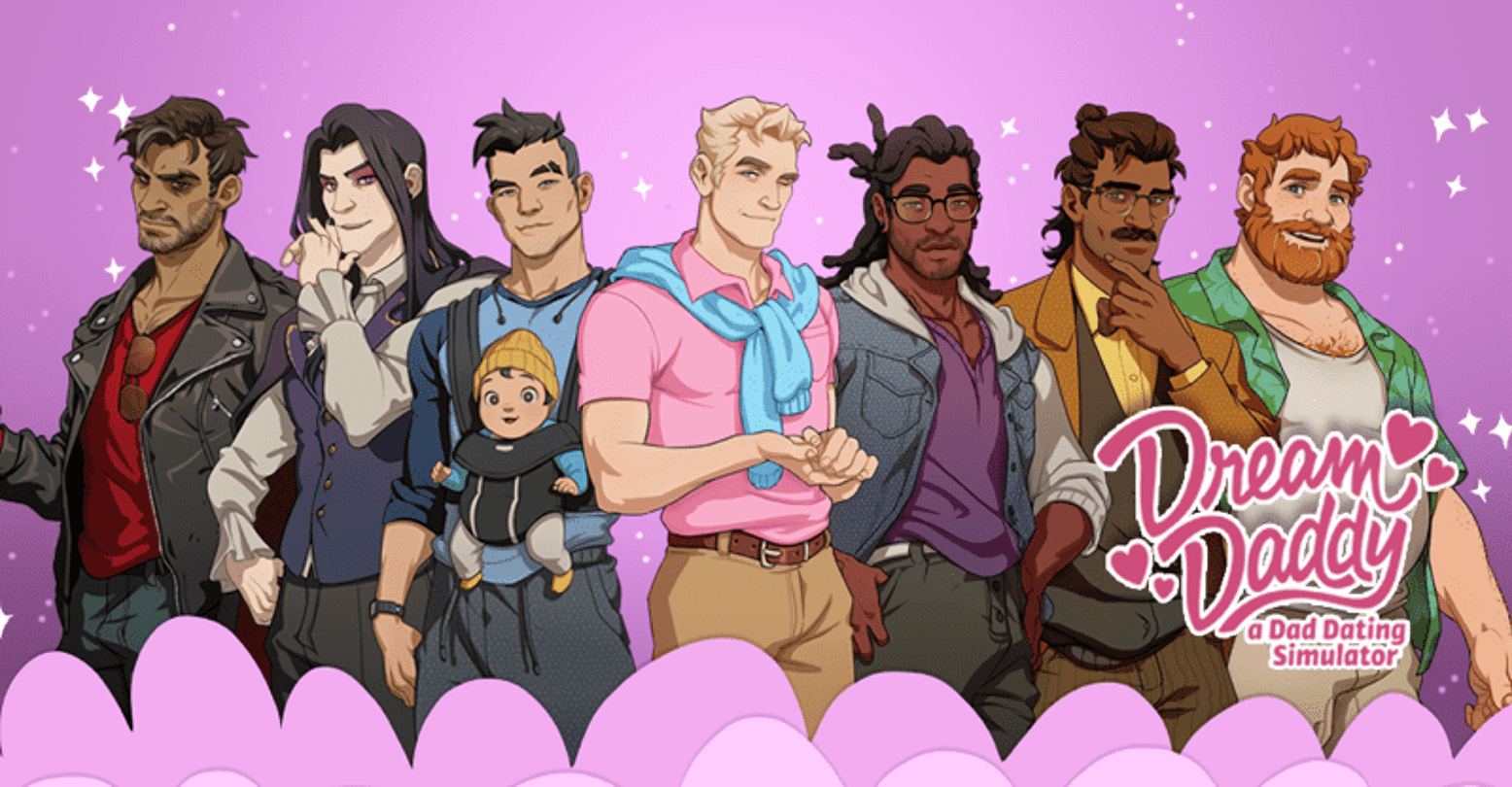 Visual novel games provide some of the most accessible gaming options for LGBTQ+ players. Not only are they more affordable and available on a wider variety of platforms, but they provide a fun way to roleplay and explore in a story-driven environment. To that end, here are ten must-play LGBTQ+ visual novel games for beginners and experienced players alike.

Created by Arin Hanson and Dan Avidan of the YouTube comedy duo and gaming publisher Game Grumps, “Dream Daddy” is one of the most popular visual novel games out there. You enter the gameplay as a single dad with a daughter who has just moved to the seaside town of Maple Bay. Once there, you discover that all your neighbors are single, extremely hot, dateable dads. Not only are there a variety of daddies and zaddies to date, but also mini games, sidequests, and multiple paths and endings. It is available on PC, Playstation 4, Nintendo Switch, iOS, and Android.

Developed by Yang Yang Mobile, this yuri (i.e. lesbian) visual novel game is about two girls who escape detention to attend a festival. Taking place in the magical city of Castlecoast, one girl is the rebellious elemental mage Marion LaRue and Audrey Clary, an heiress and alchemy student. This game has gorgeous artwork as well as emotional voice acting and multiple endings. You can play it on Nintendo Switch, PC, Android, and iOS.

3. Heart of the Woods

From Studio Élan comes this magical fairy tale about Maddie and her best friend Tara. When the two girls move to a remote forest village to investigate supernatural rumors, they find Abigail, a ghost girl who lived in the village centuries ago. Available on Nintendo Switch, Itch.io Playstation 4 and 5, and PC, this game features lovely character and CG art from Rossuri, along with original backgrounds and soundtrack, and multiple endings.

Created by Brianna Lei, “Butterfly Soup” tells the story of queer Asian American girls playing baseball and falling in love in high school in 2008. Although generally upbeat, it also mildly deals with homophobia and child abuse, so definitely play it with caution. Unlike most visual novel games, the dialogue choices don’t really influence the outcome of the story. Instead, they help you understand the characters better, leading to a truly immersive and entertaining ride. It is available on PC, Android, and iOS.

5. Our Life: Our Beginnings and Always

From GB Patch Games, this visual novel game stands out for its innovative gameplay in which you can create your own character and have them change their gender and name as they progress from childhood to adulthood alongside a childhood friend named Cove. In addition, Cove’s appearance and personality can change based on his interactions with you. Your feelings towards him can progress from friendship to romance or stay platonic.

Taking place during several summers, this game can feel like a vacation, but it’s also down to earth because of the open, genuine way feelings are expressed and acknowledged. In one scenario, you comfort Cove during your childhood together as he cries over missing the town he used to live in. This game is available on Android, PC, and Mac.

6. Heaven Will Be Mine

Created by the developers known as Pillowfight, this sci-fi romance game takes place during a battle between giant robots set during an alternate history post-Cold war universe. Humanity has split into three factions known as the Memorial Foundation, Cradle’s Graces, and the Celestial Mechanics.

In the game, you play as one of three female pilots (two of whom are trans women) and interact with the other pilots in order to influence one of the factions enough so they have control over humanity’s future. Not only can you romance the other pilots, but you can also reach multiple endings based on your decisions as you consider what is best for humanity. The game is available on PC and iOS.

7. A Year Of Springs

Made by the game developer NPCKC, this game is actually a trilogy of three games rolled into one, telling the story of a trio of female friends at the hot springs. The first game, “One Night One Hot Spring,” focuses on trans woman Haru as she navigates the sexy springs.

The second game, “Last Day of Spring,” switches to Erika’s perspective as she tries to plan a spa day for Haru. Finally, “Spring Leaves No Flowers” lets you play as sheltered university student Manami as she considers what friendship and romance mean for her. These games are available on Nintendo Switch, Playstation 4, Playstation 5, Xbox, Android, and PC.

From Schell Games comes this superhero visual novel game with an all-LGBTQ cast and the ability to form romance and platonic relationships with each character. As the player, you’re tasked with managing a superhero team in order to prevent the end of the world. You can instruct certain characters to go on missions together as well as on romantic and friend dates. This game is available on PC and Mac.

Set in college, this visual novel game from developer Winter Wolves has you playing as student Anne or Max as you start your first year of higher education. Not only do you have the option to romance male or female characters, there are also stimulation elements that influence your relationships with them. This game is on Nintendo Switch, PC, iOS, and Android.

10. Syrup and the Ultimate Sweet

This yuri visual novel by NomnomNami is about a candy alchemist who discovers a candy golem in her basement workshop. There are ten different endings, ranging from pleasant to stressful outcomes as you try to discover where the golem came from. It is on Nintendo Switch, PC, Xbox, Android, and Playstation 4.