Malta has become the latest country to legalize same-sex unions on Wednesday when its Parliament voted—in a nearly unanimous decision—to extend marriage rights to all couples.

It’s a sign of how far the country, which banned divorce until 2011, has come that the lone dissenter was Edwin Vassallo, a representative for the right-wing National Party. Vassallo, calling the decision “immoral,” broke ranks with the rest of his nationalist cohort. Maria Sjödin, deputy director of the LGBT organization OutRight Action International, said that even the most staunch conservatives felt they were “on the right side of history.”

“Malta is lucky to have politicians that are ahead on the issue,” Sjödin told INTO. “Politicians have been brave and willing to lead in the way that politicians everywhere should be leading.”

The marriage equality victory in Malta is all the more impressive when compared to how other legislatures have voted on the issue, even countries viewed as international leaders on LGBTQ rights. Earlier this month, the German Bundestag passed marriage equality by a much smaller margin of 331 to 225. Even Prime Minister Angela Merkel voted against. When the Netherlands became the first country to legalize same-sex marriage in 2001, 59 Parliamentarians opposed it. Sweden’s legislature had 22 dissenters, while Belgium had 37.

Russell Sammut, a representative for Malta’s Allied Rainbow Communities ARC, claimed that the country’s sudden vote on marriage equality is proof that the tiny island nation is the most progressive on queer and trans issues in the world. Even prior to the win, Malta has topped Rainbow Europe, a ranking from ILGA-Europe on the continent’s most LGBT friendly countries for the past two years.

“Malta is number one when it comes to LGBT rights, and we all know that Europe is the leader on the issue,” Sammut said. “So that makes Malta number one in the world.”

This is a massive reversal of fortune from six years ago, when Malta legalized divorce for the first time. In 2011, it placed 33rd in ILGA’s yearly equality ranking. That put Malta behind countries like Georgia, Kosovo, and Bosnia, where LGBTQ people often face violence and discrimination. A recent report from Reuters found that many queer and trans Bosnians are still living in the closet. 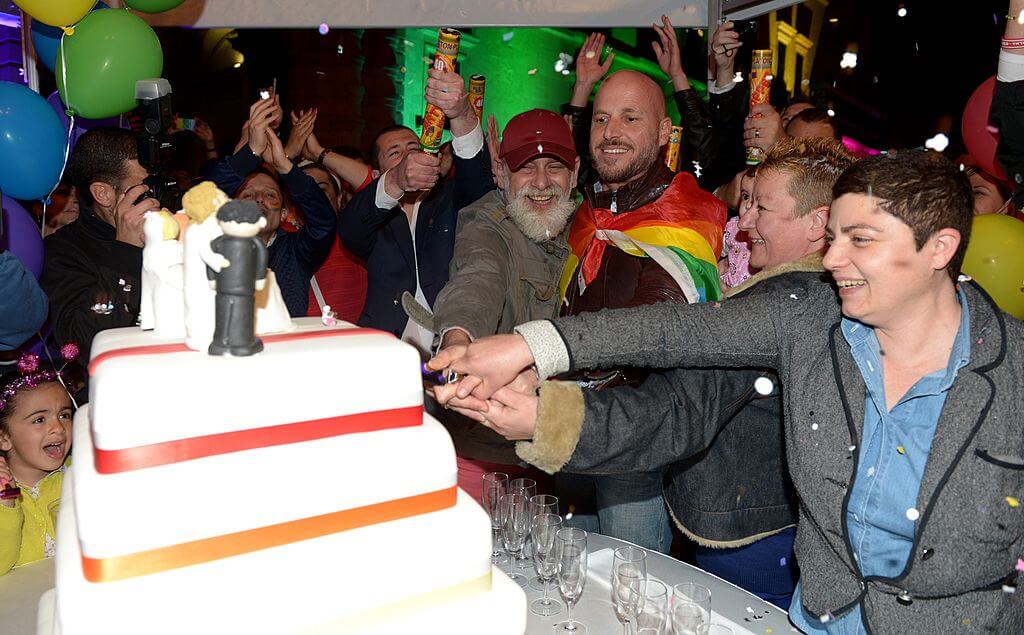 On the front lines of equality

Despite recent gains, a culture of silence was the norm in Malta for many years.

The U.S. gay liberation movement is decades old, ignited by the Stonewall Riots of 1969, but Malta’s LGBTQ rights movement only began in the early 2000s—with advocacy groups like the Malta Gay Rights Movement (MGRM) and Drachma, a queer-inclusive religious group. MGRM, the country’s largest LGBTQ organization, was founded in 2001. That’s the same year the Netherlands passed marriage equality.

While homosexuality was decriminalized in 1973, ILGA executive director Renato Sabbatini said that it remained extremely difficult to be open about one’s sexuality in such a tiny country.

Numbering just 400,000 people, Malta’s entire population is roughly the size of Omaha, Nebraska. Many families have lived in the same town for generations. Walking to the store, you’re likely to be stopped by relatives, friends, and neighbors. Being out in such a close-knit culture means that when you’re gay, absolutely everyone knows who you are.

“The majority of LGBTQ people would stay in the closet,” Sabbatini said, “or they would enter a heterosexual marriage to keep up appearances.”

The sea of change on LGBTQ rights, according to Sabbatini, began with the election of a new government. After 25 years of conservative rule, the Labour Party won a majority of the vote in 2013, bringing Prime Minister Joseph Muscat to power. Sabattini said that the “overwhelming” referendum against the prior nationalist regime showed that the Maltese “were ready to turn the page.”

“Malta wanted to get rid of the image of a small island in the middle of the Mediterranean with very conservative values,” he told INTO. “LGBTQ activists worked to change that, and the population responded.”

Over the past four years, the Muscat government has moved quickly on LGBTQ issues.

In 2013, the country allowed same-sex couples to enter civil unions for the first time. Two years later, Malta passed the “Gender Identity, Gender Expression and Sex Characteristics Act,” a groundbreaking law that remains the only legislation of its kind. Among other things, it prevents doctors from performing surgery to “correct” the genitalia of an intersex child. In 2016, Malta became the first country to ban conversion therapy.

“To me, this really shows that Malta is very willing to listen to the organizations that advocate for LGBTQ rights,” Sjödin said. “When it comes to intersex rights and conversion therapy, not everyone knows these are problems. Politicians clearly have listened to what the community members are saying.”

Not everyone, however, has been on board with the rapid progression in LGBTQ rights.

A 2016 poll from Malta Independent found 25 percent of the public does not support marriage equality, a sizable minority. The local Catholic Church in Malta—where 98 percent of the country claims to be members of the faith—has come out against same-sex marriage. In a June homily for the feast of St. Nicholas, Archbishop Charles Scicluna claimed that government leaders can “do what [they] like,” but the definition of marriage cannot be changed.

A group calling themselves “Maltese Catholics United for the Faith” took out a full page ad in the May 2017 edition of the Malta Today newspaper under the headline: “It’s Gay. But Not Marriage.”

“[T]he sanctity of marriage, between husband and wife, doesn’t grant a right to everyone to marry anyone,” the ad reads. “Nor does it grant a right to cynical political leaders to incrementally beef up their standing at the ballot box by promising or enacting gay marriage laws for the 1%. Same-sex marriage is unnatural. It runs against natural law as designed by God and handed down to us through every generation in our Maltese history.”

To its credit, the Archdiocese condemned that statement—saying the group was not affiliated with the Catholic Church or endorsed by it in any way. 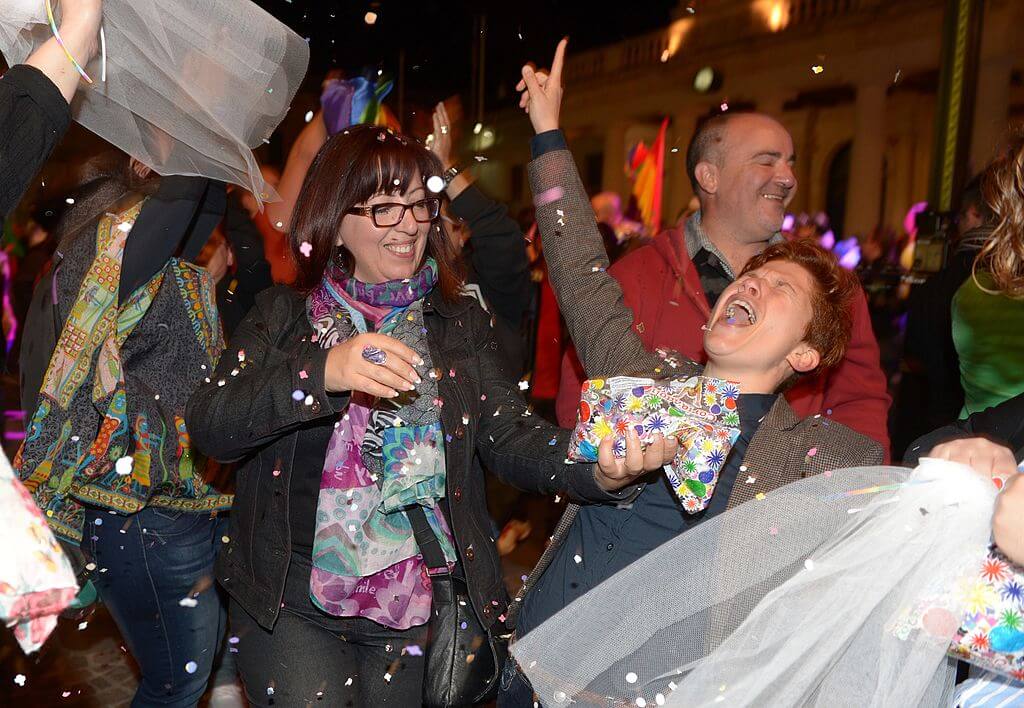 The contrast in opinion around LGBTQ rights was stark on Wednesday, as advocates and opposition groups gathered in Valletta, the country’s capital city. While LGBTQ community members rallied under a banner reading “We’ve Made History,” conservative forces blasted the bill as a Marxist conspiracy.

“We are here to defend what centuries of history, tradition, ethics, morality, philosophy, and science, that the proper place for society to be healthy and for children to be born, is one where marriage is built on the relationship between a man a woman,” Paul Vincenti, a spokesman for the right-wing group Gift of Life, told Malta Today during a Wednesday rally. “Communism never made it until the 1930s, and was reintroduced back into society in a subtle way using the vehicle of democracy and so-called freedom of speech.”

Opponents of equality marched on Castille Square holding signs like “Keep Husband and Wife” and “Mother Is Not Equal to Father.”

The latter sign takes aim at the marriage equality bill’s unique approach to inclusion. Rather than a single piece of legislation, it is actually a series of bills designed to make the country’s marriage laws “gender neutral,” as Sammut explained. Instead of “husband and wife,” legal partners will now be listed as “spouses” on marriage documentation. On a child’s birth certificate, the word “mother” will instead say “the person who gave birth.”

“I have a friend who is 50 years old and transgender,” Sammut said. “He was married, and he gave birth to children. Then he came out as a trans guy. His children call him dad, but their birth certificates call him ‘mother.’”

Sabbatini believes what has made Malta’s LGBTQ movement so effective is that advocates have consistently shown that these reforms aren’t merely an “abstract concept,” a matter of doing what is right and just. Because the country is so tiny, a majority of the population knows someone who is queer or transgender. That closeness makes the issue of equality very personal, one that touches nearly everyone’s lives in some way.

“The question is not ‘Should gay people marry?’” Sabbatini said. “It’s ‘Should John be able to marry Mark?’”

Despite the nearly unbelievable amount of forward movement in the past four years, Malta has a great deal of work left to do in order to catch up with the 21st century. The country is the sole municipality in Europe where abortion is illegal for any reason. Although Ireland bans terminating a pregnancy in most cases, the government allows exemption in cases where the life of the mother would be saved.

But Sammut claimed that there’s a big sign that progress is on its way: He’s already been getting immigration inquiries from LGBTQ people in other countries, including the United States.

Sammut runs GayMalta.com, a tourism site for queer and trans visitors to the island. He said that he gets “three or four requests a month” about immigrating to Malta. There’s been a particular uptick in recent months from Americans who are “afraid of losing their rights” under the Trump administration.

Since taking office in January, the president has turned the country in the exact opposite direction of Malta—rolling back LGBTQ rights. Most recently, legislation was proposed to strip trans military members of medical benefits.

The 32-year-old, who came out when he was 16, welcomes to Malta anyone looking for a safe place where they can be themselves.

“You can live your life here,” Sammut said. “You don’t have to fear anything.”