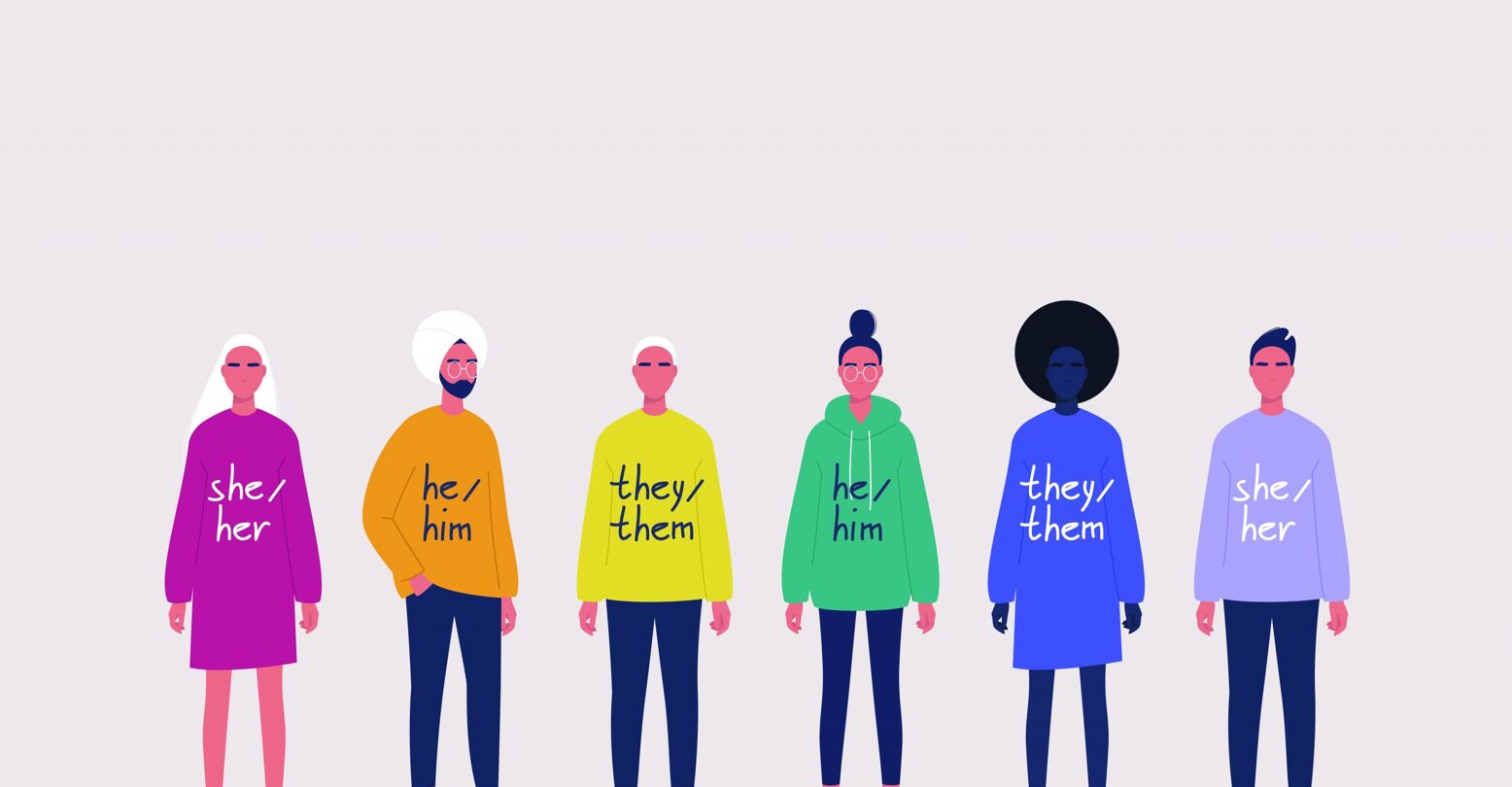 I recently started the process of using they/them pronouns with people outside of my immediate circle. While my partner and roommates have handled the transition flawlessly, my mother’s response was a frazzled, “Oh God.” In the same meeting where I told my all cis-coworkers about my pronouns, one of them, without missing a beat, proceeded to refer to us collectively as “ladies.” And just as I’d gone through the process of changing my Zoom nickname to include “they/them” and gingerly inserted it into my email signature, Instagram broke the news that it would be hardwiring pronouns into user profiles.

For all the struggle of coming out with your pronouns and finding places to prominently display them, shouldn’t I be grateful for this feature? Now that one of the world’s most popular social media platforms attempts to normalize pronoun usage in bios, it’s a slight comfort but also a concern. Like a well-trained social media user, I added my pronouns to my account with followers including former sorority sisters, parents whose children I’ve babysat, high school English teachers, club promoters, and former hookups. I was apprehensive that the meaning of pronouns will be lost on them like so many other elements of identity that social media erases.

I was apprehensive that the meaning of pronouns will be lost on Instagram, like so many other elements of identity that social media erases.

Some queer friends and influencers were quick to praise the news as a win for the LGBTQ+ community. Stories quickly cropped up with helpful but calculated infographics sharing how to update your pronouns that included instructions to update your app (convenient!) Influencers thanked Instagram for doing the bare minimum by adding a feature that mimics what users already did voluntarily by announcing pronouns in their bio. The announcement also comes just weeks before Pride, or the time of year when companies are most likely to tout the scraps they’ve done for the LGBTQ+ community in order to be praised and seen as allies.

Previously, choosing to display your pronouns was a personal choice—a tender expression of something we hold dear to our identity. When someone displayed their pronouns in their Instagram bio, it was a calling card for a shared understanding of gender. Without a feature to display pronouns, it was an authentic expression of self, not something mandated, like at the DMV or doctor’s office. Choosing to display your pronouns on Instagram was a decision to navigate how much of your personal life is public and seen as a political choice, especially to acquaintances, parasocial relationships, and marketing companies.

Now, users are voluntarily offering information to one of the worst known offenders of selling personal information. Every click, swipe, and stare is tracked when using the app and across the Internet and then sold to third-party advertisers in order to show you ads that you are more likely to interact with and, thus, buy. Facebook, Instagram’s owner, threw a fit when Apple released a new security feature that limits data collection when not using the app. The feature is contradictory to Facebook’s entire business model, which relies on siphoning as much data as possible from users and then selling it. A potential reason for Instagram to roll out a pronouns feature is to collect more information within the app without losing out to Apple’s privacy update. Users are seemingly offering up helpful marketing data, such as gender identity, to be fed more products in a move that will continue to commodify gender.

During the early days of FOSTA-SESTA, a law intended to curb sex trafficking that has, in reality, been used to limit online speech, I watched from afar as sex workers I followed hurriedly shared any information they could to prevent their accounts and livelihoods from being shut down under new and purposely vague “community guidelines.” One of the most common tips to emerge from this time was to set your gender to male because accounts set as female were subject to more intense scrutiny from Instagram censors. Intentionally including your pronouns in your bio could be another method for Instagram to censor speech and sexuality.

Why should we believe that Instagram’s pronoun feature is a win for the trans and nonbinary community when we’ve been shown over and over Instagram isn’t a safe place for us?

Salty, an independent media company that aims to amplify the voices of women, trans and nonbinary people, recently published a report about just how hard it is for people with marginalized identities to exist on social media. The report shares that “BIPOC users, body positive advocates, women, and queer folx feel Instagram is targeting them for their identity” including flagging content that cis, straight, white, and thin users get away with. Why should we believe that Instagram’s pronoun feature is a win for the trans and nonbinary community when we’ve been shown over and over Instagram isn’t a safe place for us?

Though I’ve used they/them pronouns among my inner circle for the better part of a year, the fear of coming out and being met with confusion or having to enforce my pronouns previously kept my bio bare. While I appreciated seeing others display their pronouns, I just wasn’t there yet, and I had to remind myself that was okay. There are many closeted trans and nonbinary folks for whom formally announcing their pronouns in their bios could be onerous or even dangerous. They shouldn’t have additional pressure from peers, influencers, or a picture-sharing app to share their pronouns.

One positive thing did arise from adding my pronouns to my Instagram bio: On the same day I added they/them, my mother used she/her to refer to me in a passing conversation. By some electric current of feeling seen—granted to me only after putting my pronouns in my bio (kidding here)—I reminded my mother that I’m nonbinary. Instead of completely minimizing me, my mother said this time, “I’m still not sure what that is, but I love you and just remember that.”

Though my pronouns in my bio still can’t make everyone see me, it’s a reminder that we’re trying to be visible in whatever means we can.♦

Rax Will is a graduate of UC Riverside’s MFA in fiction with words in the New York Times, Los Angeles Times, L.A. Review of Books, and POPSUGAR. They are currently at work on a queer coming-out novel set in Los Angeles. You can follow them on Instagram @existentialrodeo.