About two years after going on testosterone in 2012, Ashton Colby’s gym routine morphed into an obsession. Two or three days a week became five days a week, for several hours a day. First 20 minutes of cardio on the elliptical, rowing machine or treadmill. Then heavy lifting deadlifts, squats, etc. until he was exhausted. He ended his workouts with more cardio, 45 minutes to an hour.

He drank a protein shake in the morning and a protein shake at night. He ate four grilled chicken breasts for one meal. His bulking-up regimen up began to give him stomach cramps and nausea. But he persisted, succumbing to the pressure to get ripped and lean.

He began taking more than the prescribed dose of testosterone in an attempt to develop muscle. As Colby tried to achieve a new swole physique, an eating disorder bloomed.

Eventually, Colby times his food intake. During the first half of the day, he’d forego eating. Then, he’d work out for a couple of hours. Before going to sleep, Colby would down several thousand calories. He’d eat multiple chicken breasts to attain 130 grams of protein, a number he garnered from watching bodybuilders on YouTube. He threw in veggies and pasta for good measure. For calories, he downed entire pints of ice cream.

“I was definitely over eating to get as big as possible and in order to take up as much physical space as possible,” Colby told INTO in a phone interview. “I thought the bigger I got, the safer I would be in my body.” 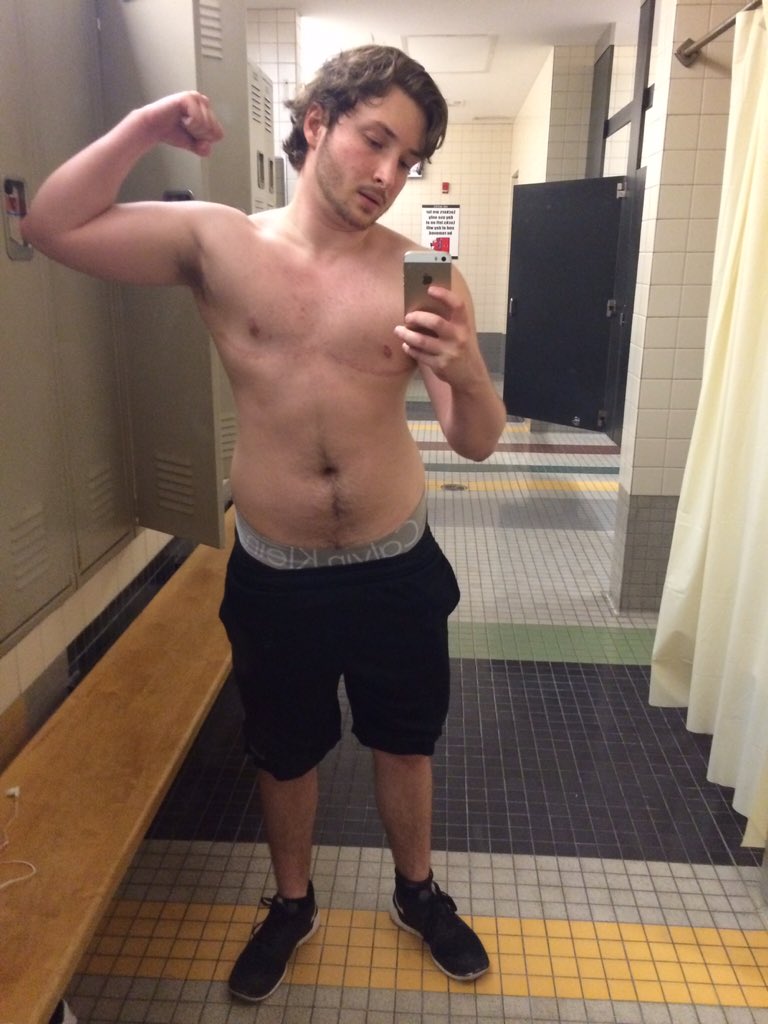 As Colby’s exercise and diet commandeered his life, he was also garnering headlines for aYouTube videohe made documenting his transition from a pageant queen to a transgender man.

In 2016, he appeared inPeople,TodayandMic. Colby had become part of a group of trans individuals who used social media to document their transitions to inform others of what a transition could look like. And even though Colby was using social media to inform others that there was no one way to transition, he was still obsessively watching videos for tips on how to get a bigger frame, effectively succumbing to the pressures he hoped others would avoid.

While the internet is ahaven for queer peoplelooking to share stories with one another, that doesn’t mean queer people are immune from the pressures of social media especially those with the brightest spotlight on them. “There’s this pressure to strive toward that body and that equates to a successful transition,” he said, referring to pressure felt to participate in a “toxic masculine shirtless selfie culture”, similar to what cisgender men take part in across media.

“We don’t focus on people being happy,” he continued.

According to Colby, the transgender men who are often uplifted in the media both traditional and social media are ones that are more likely to pass as cis and who have defined musculature.Aydian Dowling, who almost became the first trans man to grace the cover of Men’s Health, sports a muscular physique, as do most if not all of the people featured in popular lists likeBuzzFeed’s “26 Trans Guys Who Are Way Too Hot to Handle.”

Joanna Imse, assistant program director of Walden Behavioral Care’s Amherst Clinic, which specializes in LGBTQ people who are living with eating disorders, agrees that social media has the potential to affect someone’s transition positively or negatively.

“Guys who have been so brave and amazing in documenting their stories, and they’re being picked up by BuzzFeed and Cosmopolitan does that set the standard for ‘This is what it means to be a trans man?’”she said in a phone interview withINTO.

“In order to get fans and followers is this what I have to look like and how do I get there?”

Colby used to post progress pictures on Instagram of himself shirtless. Though it began as a way to mark his progress and share it with others, it quickly became an excuse to accrue likes and good favor. 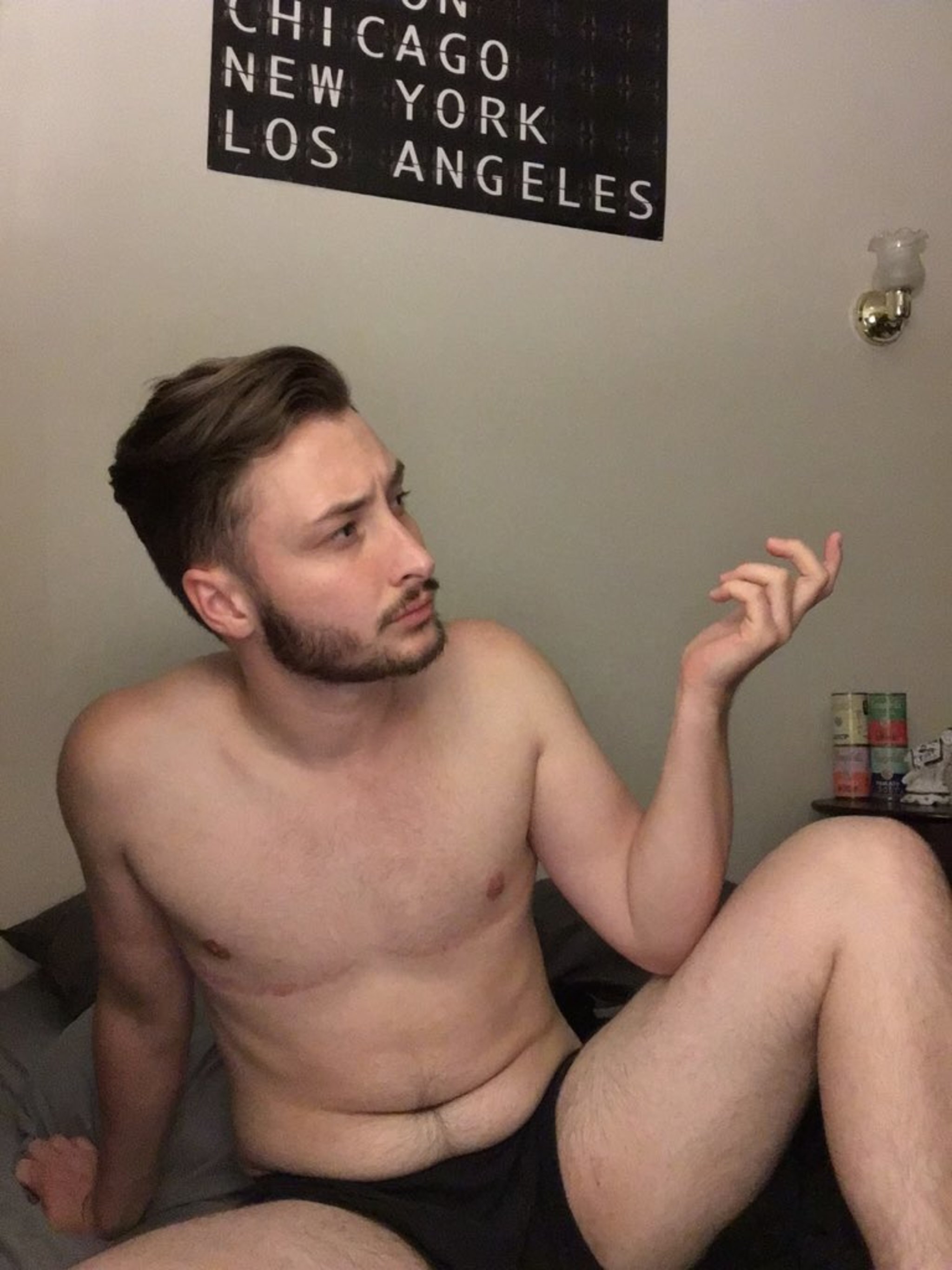 “I was basing my happiness on the likes and the praise that I got in response to that and I still wasn’t happy,” he said.

At least one study has shown an increased risk between social media consumption andrisk of eating disorders, regardless of sexuality. And while statistics do exist that show that LGBTQ populations areat risk for disordered eating, few if any data parse through the complicated reality of transgender men.

The extent to which eating disorders are a problem for trans men remains a mystery because of this lack of data, according to Imse. Clinical guidelines for diagnosing eating disorders have been updated, Imse said, but a lot of research still relies on outdated questionnaires that focus almost exclusively on the experiences of cisgender women.

“Our trans clients, they aren’t always picked up by those questionnaires,” Imse said in a phone interview withINTO, referring to the fact that many surveys focus on cisgender women, effectively excluding the experiences of trans people.

Aside from being short-changed by traditional research, transgender men face another big hurdle when dealing with eating disorders, according to Imse. The process of transition is about feeling safe and comfortable in one’s body. An eating disorder often occurs when a person wants to exert control over their body.

“By manipulating your body through exercise and food, you may be able to have some safety and structure over your body,” Imse said. “For trans men, that is imperative to feel safe in their bodies.”

Colby agreed with Imse. Colby said that the pressure some cis men feel to develop muscles for aesthetic value translates into aesthetics and safety for trans men.

According to Sand Chang, a clinical psychologistwho works with trans individuals and identifies as nonbinary, transgender men face comparisons to both cisgender men and other transgender men. Therefore, trans men have two ideal body types against which they can gauge their own idea of a successful transition.

Another part of the problem, according to Chang, is that some trans men have not yet escaped the dangerous societal pressures of presenting female prior to transition.

“They’re not able to escape the sort of messages you get when you’re assigned female and socialized as a woman,” they said.

While societal factors can influence a transition, the medical community may be partly to blame. According to Chang, some trans men with higher BMIs may be refused gender affirming surgery until they shed pounds. This, Chang asserts, can sow the seeds that lead to issues around body image and health the very problems that plagued Colby.

“They’re getting the message that in order to be a man, you have to be a skinny man,” Chang said.

Kay Ulanday Barrett,a trans man from Jersey City, New Jersey, got that message. His general practitioner initially refused to clear him for top surgery, which he had in January 2016, because of his BMI. Barrett is also disabled in his feet, making exercise particularly difficult.

Barrett said the message he got was that “only specific kinds of people deserve surgery and deserve medical care.” He added that all the questions clearing him for surgery were “centered around fatness or anti fatness.”

“If you don’t fit in a standardized mold of what skinny or able-bodied is, you don’t deserve your surgery,” he said.

According to Chang, these barriers result in people resorting to “strategies to manage their dysphoria or disconnect or discomfort with their bodies not lining up with who they are.”

According to Imse, when treating a transgender client who has developed disordered eating, she makes room for both experiences: she validates who they are and wants to validate the feelings behind why their eating habits might have become unhealthy.

“We have to find a balance! Simply because we stabilize someone medically, doesn’t mean we stabilize them psychologically,” Imse said. “We have to treat them both in tandem.”

That sort of validation is what led Colby to make what was ultimately the healthiest choice for him: to go off testosterone temporarily.

“There’s no one size fits all for transition,” Colby said of his decision, echoing the same message he would convey to his YouTube followers. Now, on the other side of ceasing and restarting hormone therapy, he’s lived that reality. He also said his doctor supported his decision. “It was a subconscious fear of losing testosterone. I had to prove that I’d be OK. You don’t have to rely on testosterone to be happy and be OK. It felt like it let the steam out when I went off testosterone.”

Now, Colby says he has gone back on testosterone, but is using patches instead of injections.

“I’ve felt so much better in my body,” Colby said. “I feel so much more at peace because I’ve taken the pressure off of having to look a certain way for my gender to be validated.”