Years ago, I interviewed a gay Jewish teenager on being out and proud as a leader of a national youth group. I was working on a project concerning the effect on Jewish programming on the burgeoning faction of queer youth. At the time, I asked him if he felt a sense of empowerment, being an LGBTQ leader. His voice cracked with deflection. My questions were a punch to the throat. He wanted nothing on the record. Soon after that conversation, I abandoned the project.

I had been a member of these youth groups, these summer camps, these synagogue programs. It soon became clear that the bias I encountered in my research was more than stagnated: it was monolithic. The first memory of the Jewish summer camp I can recall is almost accidentally drowning myself after I capsized a kayak, after being faced with the shame of not pairing off with a boy to walk me back to my cabin after Shabbat services. I was nine years old.

I’d buried this memory, this disappointment, until a week ago, when 25 Ultra-Orthodox Jews published a letter invoking a boycott on JW3, a Jewish community center based in London, for “[promoting] a way of life which is in total contradiction to Orthodox Judaism and halachah,” otherwise known as Jewish law. The crime of equity, to them, seems a crime nonetheless.

There is nothing remarkable about bombastic, prejudicial declarations in the name of zealotry. While enough to construct a couple of scant paragraphs for any old telegraphic news agency, the insipid rallying of these rabbis is hardly much to write home about. What it is, rather, is symptomatic of a larger issue within the Jewish sphere as a whole: that of the repudiation of LGBTQ members of the community, whether unintentional or notand that its casual acceptance as the silent norm makes it all the more insidious. Silence, after all, is almost always synonymous with complicity.

Despite this simplistic first glance, It’s reductive to deem the matter a simple case of tolerance versus acceptance. Rather, its complexity stems from a much more visceral, epigenetic core. Boycotts like these push queer Jews out of Jewish spaces due to a combination of post-war, post-Holocaust emphasis on reproduction. This doesn’t just happen in fringe sects, either. 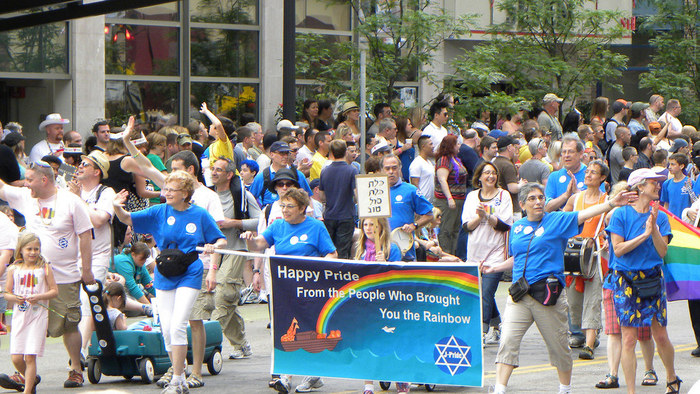 If you think this is an exaggeration, think again: alarmists harkening the dwindling population of Jewry have been around for decades. As recently as last year, Steven M. Cohen, a noted sociologist and current Research Professor of Jewish Social Policy at Hebrew Union College, used data sets that tracked the slight dwindling of non-Orthodox Jewish birth rates to conclude that American Jewry as we know it is more or less dying. (Full disclosure: I ardently and publicly argued against his summation. He also once proposed that Jewish belief systems and feminism are in “inherent but not insuperable” opposition to each other; and yet, I exist.)

The pressure created by this doomsaying is damaging. Worse, the lesson is this: if you don’t procreate, what are you good for? If you don’t adhere to a traditional, nuclear version of a family, then does your family have value? If you place worth or merit on reproduction rate alone, you’re bound to make demography your creed, and you’re bound to alienate a sizable population that adds to that very same demography.

For LGBTQ Jews, the upside to repudiation is an inspiration to create uniquely Jewish and queer spaces.The recent revivalism of cultural aspects relating to the Yiddish language have gone hand-in-hand with a Jewish queer and trans punk rock movement. (Yes, you read that correctly, and it’s fucking rad.)

Multi-service non-profits like Keshet and Jewish Queer Youth International specifically aim to provide both support for Jewish LGBTQ individuals and to provide resources for non-LGBTQ folks for the sake of inclusivity. In major urban epicenters like New York City, nightlife promoters like Jayson Littman, the founder of the aptly-named HEBRO, have created entire series of party-centric events specifically geared towards queer Jews that simultaneously invite all walks of life to attend.

As Littman himself put it in a 2013 interview with The Forward, HEBRO is “not doing gay work in the Jewish community,” but “doing Jewish work in the gay community.” Which, of course, brings us back to the initial problem.

It’s irresponsible to say Jewish culture is innately homophobic. Criticism of one cultural component is not an indictment on the selfsame culture as a whole. Strides have been made since the early 2000s to incorporate LGBTQ Jews into certain facets of socio-religious life, like the ordination of openly queer rabbis in almost all denominations of Judaism. Even so, it’s a far cry from unquestionable unification. It’s only pittance.

I can’t help but wander back to the conversation I had, years before, with a queer teenager who did not have the means to hold one identity with equal importance to the other. Even now, I’m not sure whether LGBTQ Jews will ever have those means. I hope one day he does. I hope, even more, that we all do.

J.E. Reich is a genderqueer Brooklyn-based fiction writer and journalist whose work has appeared in Jezebel, The Toast, High Times, The Forward, and many other places. They tweet insufferable dad jokes @jereichwrites.