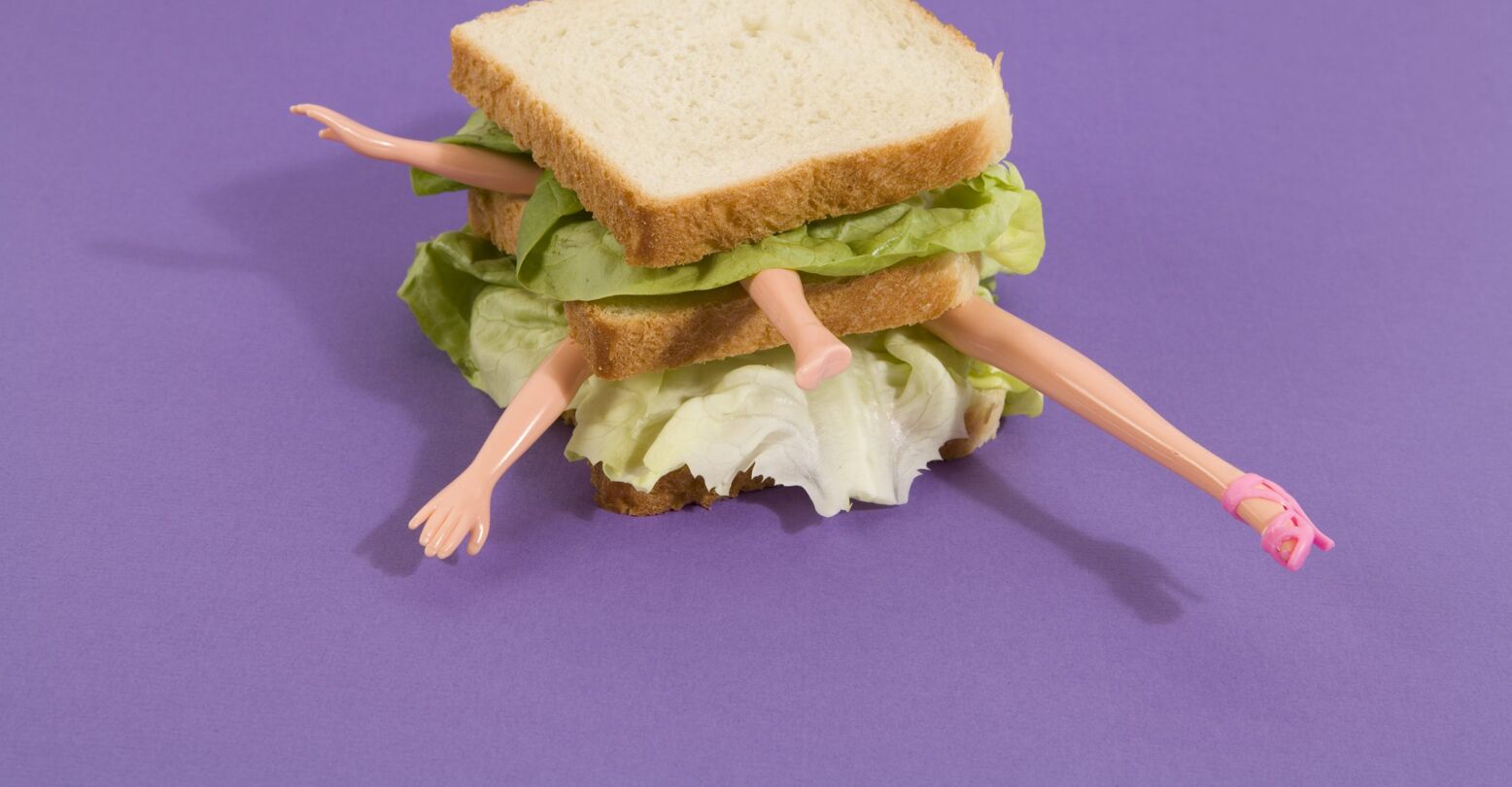 I’m not vegan, but I’ve dated a few. The Aspiring Fashion Designer, The Gender Studies Student, The Stoner With Questionable Income: I loved them all, even if briefly, but never to the point that I fully questioned my dietary decisions.

The Documentarian was different. He made me question my relationship with food, to wonder if my eating habits were abusive.

We met on OKCupid. We matched and messaged, days turning to weeks full of talk about horror movies and queerness. He had a sharp wit but a distance, the air of someone “always out of town,” the type who was impossible to keep present. Even stranger, he didn’t have a profile photo and didn’t send any photos of himself. Desperate for a boyfriend in the late 2000s, I ignored the situation’s peculiarities and strong-armed him into a date at an East Hollywood dive, which turned into a hook-up, which turned into his reluctantly agreeing to date. We were together for the better part of a year.

There was a lot of good to him – A desire to queer the horror genre, his moisturized-Norman Reedus looks, his devotion to Lady Gaga, his dedication to documentary. But there were irksome quirks. He hated my dog, for one, calling her foul names, yelling at her, and doing everything he could to “break” her into a well-behaved dog. (For the record: she was very well-behaved. She just had anxiety.) Our relationship always seemed theoretical, too, as he continued his in-and-out-of-town-ness and maintained a distance even when we were together, joking about wanting me to be less gay or pining after the heterosexuals in our orbit. Third was the militant veganism. Not just one to proselytize, not just one to criticize, The Documentarian wanted to change how the world thought about food. He was convincing too.

He had a sharp wit but a distance, the air of someone “always out of town,” the type who was impossible to keep present.

His plan was to change the world with a documentary that revealed the only animal that could be eaten, an animal with autonomy, who could consent to becoming food: the human.

He told me over and over again that animals, in their innocence, have no way of opting in or out of the food chain. It was cruel to eat meat – and he was seeking absolution for eating in this way for the majority of his life, despite proactively eating meat substitutes and foods imitative of meat products. We would pack and unpack this idea over email or while watching movies like Sleepaway Camp and Lamberto Bava’s Demons, as I realized that, yeah, animals don’t have a say in their food-ness. We should eat meat that consents! After all, the idea of eating another human wasn’t that weird since it seemed to trend in tandem with the cultural zeitgeist of Los Angeles and our sexuality.

The late aughts were a time when parents ate their placenta – and I had a mutual acquaintance who planned to do so. I asked her, repeatedly, if we could share the placenta, a food item that I imagined to be a magical iron pancake that a baby carried out of the body. The underwhelming cannibal reality was the placenta came in pill form. “Hopefully we can get a bunch and make a shake out of them,” The Documentarian said via email. “Can we make pies?” I responded. “Wouldn’t that be delicious?” he joked in return. “If not [placenta], I’ll have to eat you.”

This was the other selling point of cannibalism: our own erotics: sexuality as a form of eating another. There was no bloodletting, no dismembering, no scenes from Hannibal recreated in our pleasure, but instead our fairly straightforward queer sex took on new meanings as we sucked and swallowed, chewed, and chugged. This was always so funny to me, something I would call out in the act by fellating him as if he had a literal hot dog between the legs or by referring to parts of his body as antithetical food items like bonbons and Manchego. He indulged my jokes, but insisted that sex was serious and never funny, that there was nothing playful about the act. He understood that our sexual activities, like all sexual activities, were a form of consensual cannibalism but didn’t recognize the absurdity in the act. His Catholic guilt always got the best of him.

This was the other selling point of cannibalism: our own erotics, sexuality as a form of eating another.

I supported the documentary (Or “shock-you-mentary,” as he called it.), helping him research, talking through subjects, and figuring out ways to make it work, to get him a human to eat. He had produced a good amount of the film too, interviewing key subjects and filming an examination with forensic psychiatrist Dr. Park Dietz, the man who was Jeffrey Dahmer’s therapist. He searched for a human to consent to his plot, eventually finding one of his grandparents interested in donating their body for the feast. We researched so many things in the process – How does human taste? Like sweet beef, we found at the time. Where is it legal to eat human meat? This is questionable, but at sea holds a long tradition of cannibalism—all to help him achieve this dream.

He didn’t seem to take me or our relationship seriously because, in some ways, he didn’t take his own sexuality seriously.

There was always a problem though. The day to eat the grandparent wasn’t coming soon enough, as someone he loved had to die for this wish to come true. He didn’t seem to take me or our relationship seriously because, in some ways, he didn’t take his own sexuality seriously. Like his decision to pursue cannibalism out of carnivorous nostalgia, our relationship was a project of him making peace with his sexuality – and it never worked. The inability to share a laugh, the inability to confront internalized homophobia, the inability to be a good boyfriend: they were a lot. The problem was he could fulfill his desire for meat by eating chicken nuggets made from veggie proteins or hamburgers made from beans. But escaping homosexuality? There was no way out of that.

Unless the relationship ended – and it did. It was fun to pretend we could be fine young cannibals but it wasn’t sustainable. Like the horror movies we watched, the ending was messy and surprising: we had unfulfilling sex and I confronted him on how terrible he made me feel, how I didn’t like how he treated my dog or my life or me. It’s hard being with someone who lusts for heterosexuality within a queer relationship. It’s even harder when that person craves animal (or human) meat, only to take this frustration at not having it out on you.

It was a strange time. But cannibalism comes and goes in the zeitgeist, from the man who literally ate his amputated foot to Armie Hammer’s cannibal-sexual exploits. I know The Documentarian’s cinematic pièce de résistance will be shared with the world eventually. My tie to the film will be scrubbed out but he will have his day, feasting on the flesh of a grandparent at sea, all alone, consenting meat in hand, sordid stars in his eyes.♦

Kyle Raymond Fitzpatrick is a writer living in Los Angeles. He has written for various publications, from Playboy to PBS. He founded and edited the Los Angeles art and lifestyle website Los Angeles, I’m Yours for several years.