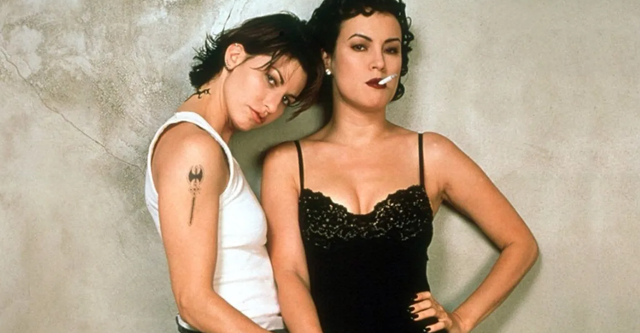 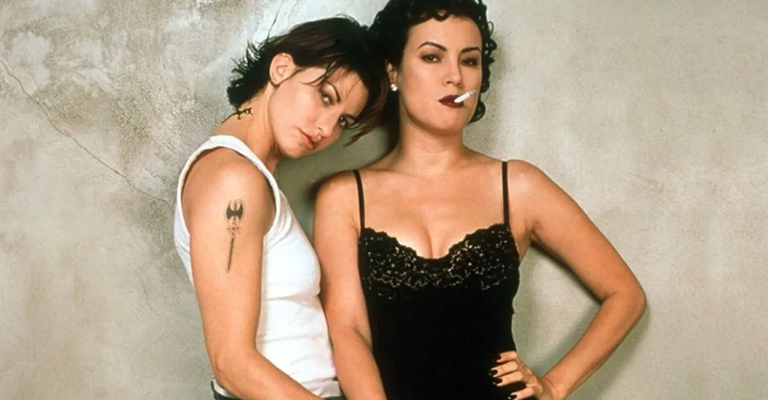 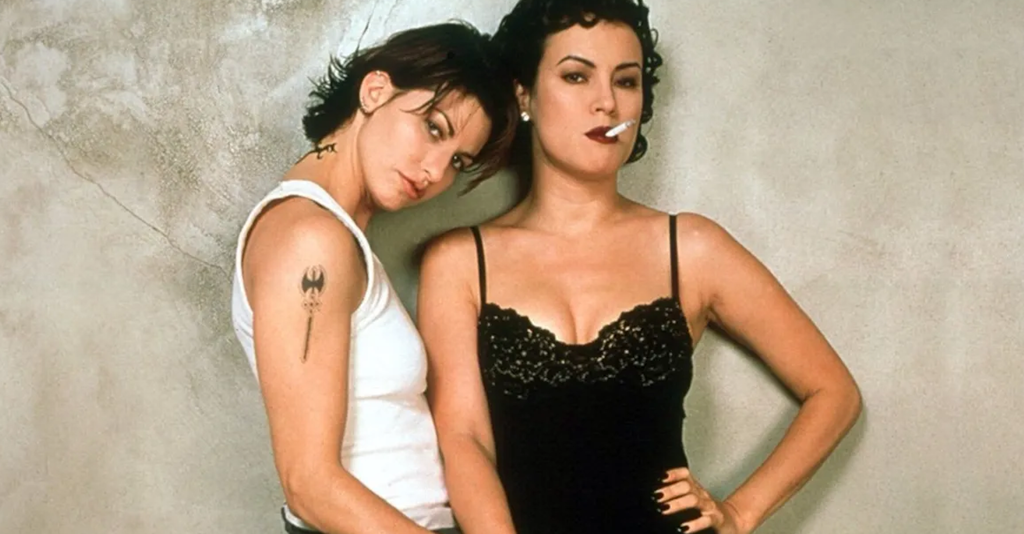 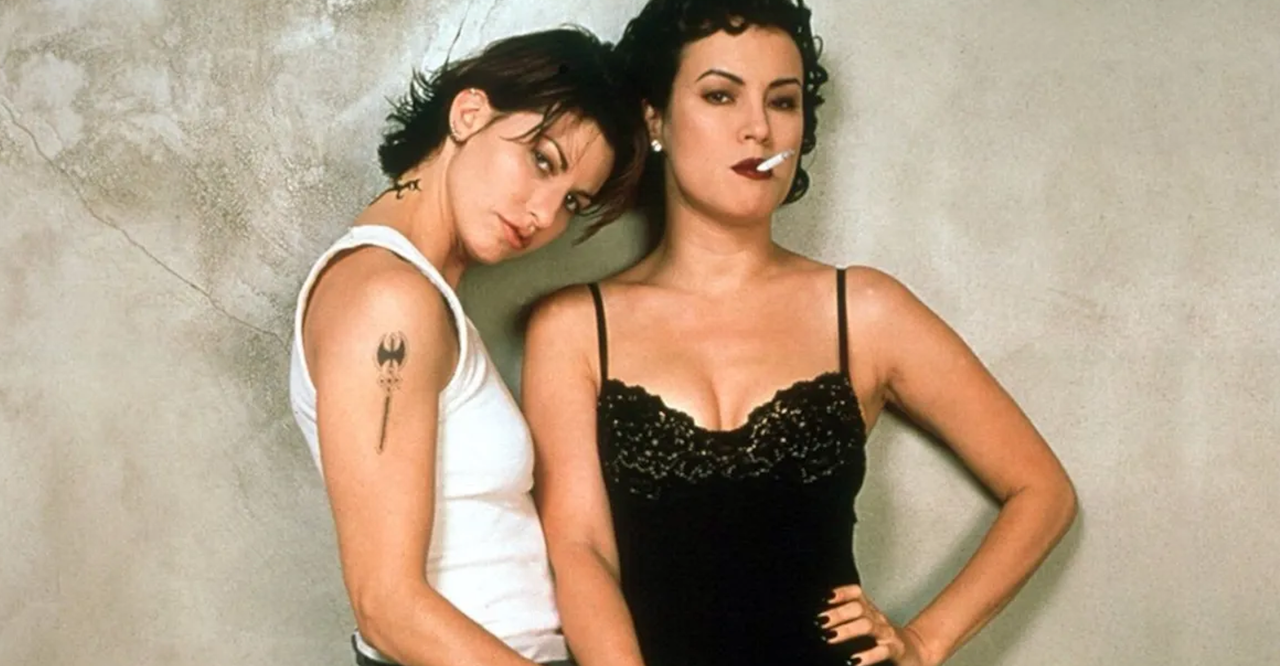 The opening image of Bound – the Wachowski sisters’ debut film; a visceral, aggressively queer Neo-noir – is a perfect introduction to the action that follows. Gina Gershon’s Corky is tied up in a closet, replaying the voices that got in her head. This idea of being tied up moves beyond the physical in Bound: it’s the way in which Corky and Violet (the always iconic Jennifer Tilly) challenge these ideas of being tied down as one thing, subverting the expectations of gender, that is the key to their liberation.

The film explores these ideas most explicitly through Jennifer Tilly’s performance as Violet—so much of the film hinges on her desire to “get out” of life as mobster’s girlfriend—all of it femme affectation; the pitch of her voice, the softness she puts on whenever she talks to Caesar (Joe Pantoliano), all of it carefully calibrated to make her seem as non-threatening and submissive as possible. In an early scene with Corky after they first sleep together, she insists that even though Corky can hear her and Caesar through the thin walls, that it isn’t sex, but “work,” a choice she’s made in order to survive. On the surface, Bound is all about the butch/femme dichotomy that exists between Corky and Vi, but the more the film goes on, the more the layers of the two women are revealed—the old wounds that make Corky so defensive, Vi’s canny rebelliousness—neither of these women are what they appear to be at first glance. The film flirts with this a lot when they first meet; the stark differences between them in an elevator, the comically pornographic conceit that leads to their sleeping together, with Corky the plumber and Vi the dissatisfied housewife. Even then, they’re playing parts, and the joy of their dynamic and relationship is seeing these layers of performativity fade away as the women simply become themselves in each other’s company. For Vi in particular, this means shedding the role of “object,” which is how both Caesar and the other men around her seem to view her; it’s no surprise that in his most frantic moments, Caesar points a gun at Violet and says “I need you,” all his paranoia and threatened masculinity coming to a head in this moment.


Because Caesar isn’t really the kind of guy you’d find in mob-focused Neo-noirs. Bound relishes in being able to subvert the idea of maleness and mobsters; no longer the calculated masterminds of The Godfather, or the unbridled id of Scarface, the mobsters in Bound are like petulant, paranoid children, constantly competing with one another, the idea of maleness constantly thrown on its head. One of the most telling—and hilarious—moments in the film is watching Caesar try and frantically prepare for the arrival of his boss: the way he runs around in a towel, fretting about having the right kind of whiskey. It dovetails with Vi’s performance of the feminine, approaching everything in a way that flatters Caesar’s fragile ego. In exploring this dynamic, Bound is able to subvert the expectations of gender; instead of the woman fretting about everything being perfect for the arrival of someone, it’s the man, with Vi even saying to him “I’ll be back before you get dressed.”

On the surface, Bound is all about the butch/femme dichotomy that exists between Corky and Vi, but the more the film goes on, neither of these women are what they appear to be.

Once Caesar’s mob associates arrive in the wake of chaos and a killing, with Caesar needing to cover his own ass in order to stay alive, mobster Mick notices the frantic changes that have taken place in the apartment, which Caesar insists were Violet’s doing. “She was nervous about Gino coming and wanted everything to look perfect. You know women, Mick.” It’s this sequence, where Vi waits in the bathroom and makes a phony phone call to cover for Caesar, where the film flips the script on gender performance; she pretends to be Gino on the phone, making up a story about a car accident—as opposed to the reality, that Gino was shot by Caesar— in order to absolve him, foregrounding this new layer of performance with the line “you’re blowing your only chance, asshole. Act like I’m Gino.”

In the final act of Bound, when Vi and Corky try to steal the mob money and run away together, Corky and Caesar become aesthetic inversions of each other. They’re both in vests; hers white, his black, and looking at them side-by-side, they offer two different portraits of masculinity. Corky’s is knowing, playful, and a little bit performed; it’s clear that her past pain has created a certain kind of distance, the mask of masculine repression, which Violet helps to remove from her face. But Caesar’s masculinity is narrow, a straightjacket that he can’t break out of; it’s no wonder he spits out the line “everybody knows your kind can’t be trusted. Fuckin’ queers, you make me sick.” But Caesar’s sickness at queers feels more complicated than just common homophobia, because looking at Corky with Violet, it’s clear that these queers are everything he’s not, everything he’s unable to be.

The genius in the structure of Bound is the way in which it sets up easy to understand expectations from that opening image of Corky tied up: mob involvement, the possibility of betrayal by Violet, the spectre of violence hanging over her. But as the narrative goes on, these expectations are subverted, as the story moves from one that’s assumed to be about submission becomes one about control and liberation; the final moments of the film have Corky expressing the fact she doesn’t know what the difference is between her and Vi, and there’s something in this that’s freeing, the idea that they’re both able to be liberated, without needing to feel forced into narrow ideas and roles. It’s this narrowness, this role-as-straightjacket, that defines the world that the two of them escaped.♦