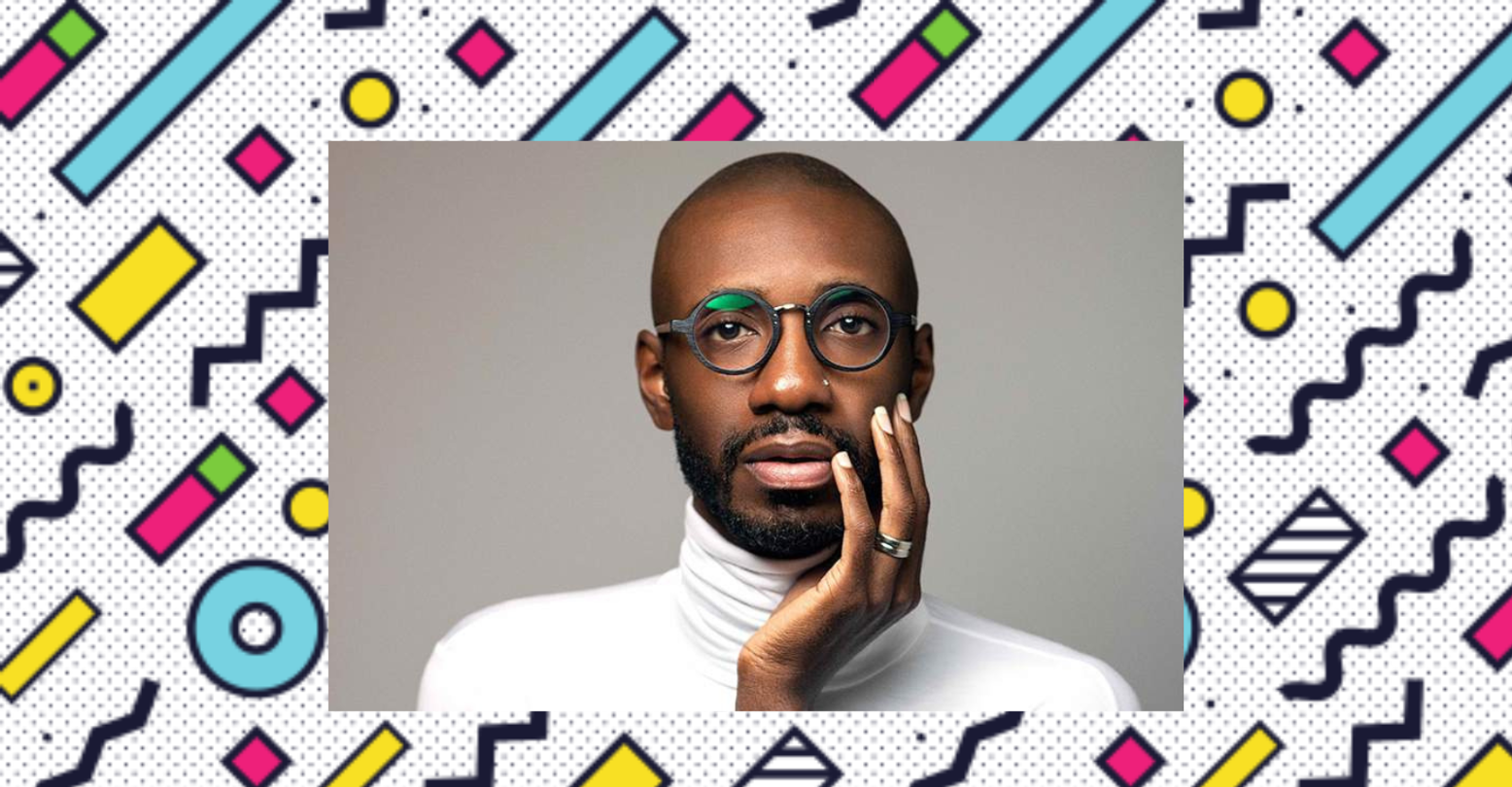 As everyone on the Internet says, the pandemic isn’t over just because you’re over it. But when the pandemic hit in 2020, the lack of physical connection and feelings of loneliness were felt all over the globe. Those same feelings are brought into Donja R. Love’s latest web series i need space. As a Black queer person living with HIV, Love uses his work to bring holistic representation of the communities he’s a part of.

The recipient of multiple awards and fellowships, his work includes plays like soft, one in two, Fireflies, Sugar in Our Wounds, and The Trade. And when he’s not creating content, he’s busy running The Each-Other Project, an organization dedicated to building community and providing visibility, through art and advocacy, for LGBTQ People of Color.

INTO spoke with Love about his latest web series, how he creates representation for Black queer love, and what’s next for the talented creative.

So obviously, i need space is one of your latest projects. What inspired you to create this and then put it on Broadstream?

I was having a conversation with the artistic director of The New Group: they produced the last stage work of mine (one and two) before the pandemic. We were talking about what everybody at the time was talking about, which was being on lockdown. And I was fortunate enough, at the time, to quarantine with my husband. I actually had someone that I could hold space with. And one of the things that it told me, my husband and I joke about, was that we actually really do like each other. Like, yes, we love each other, but to be locked down with someone for “X” amount of time with no foreseeable way out, we’re like, “Oh, we actually really do f*ck with each other”.

I share all that to say that when I was talking to the artistic director of The New Group, I was sharing that, and I was also sharing our friends that we would hold space with and Zoom with. During that time, a lot of them were quarantined by themselves, and they were just talking about how lonely they were. They were talking about if I could be candid about how, like, they want to f*ck. They want another body on top of theirs.

I was like, I think I have something I want to create and say based on that. And so i need space came to be, and I just started to dig deeper into it and figured out the characters more and the story more. But essentially, it stems from being on lockdown, being away from people.

What was your reasoning behind making the story unfold over video chats?

A multitude of things. The biggest was the “Rona”. And so like I said, when I first started it, it was literally 2020, when we didn’t know what the future was going to hold. And we filmed it last year, which was like 2021 and things were shifting. But again, I still found myself very interested in going back to what I said originally. “What happens when you have physical distance, but you’re still longing for mental and emotional distance?”

Those are the things that now you really have to investigate within yourself. Because you can be with somebody and be like, I need space to get that space. So, I was really interested in that. And the best way to do that felt like having our protagonist away and people having to interact with each other through mediums like this, whether it’s Zoom, whether it’s Facetime, whether it’s like IG, or like these other ways in which people communicate.

Blackness, queerness, and destigmatizing HIV all play a central role across different projects. How do you highlight those different elements within i need space?

I think first and foremost, as a Black queer person living with HIV, that’s just so innate in my being. So of course it’s going to come in my artistry. It took me a lot of time to get to where I’m at right now because there was a version of Donja where I did not like myself. I didn’t like myself because the world taught me not to like myself. And I had to do the work on my own to be like, oh, f*ck everything that you heard. F*ck everything that you were taught. You are beautifully and wonderfully made.

We seldom see Black queer couples together on screen, but you do that with the portrayals of Marcus and Marquise (played by Christopher Livingston and Justin Weaks, respectively). What are some of the nuances that you keep in mind to ensure that their portrayals as a Black queer couple stay positive?

Talking about the nuance of it, and talking about a fully realized relationship and being very interested in what that looks like for us. Because, as you said, we hardly get to see our love reflected, as if whiteness is the only thing that queer folks of color, queer people of the global majority, are attracted to. Which is to say, what my husband and I have [is] being erased. What my friends have, the relationships that they’re in, the marriages that they’re in are also being erased.

The series is very sexually liberated. What steps did you take to ensure that a positive and human narrative of sex-positivity shines through?

I’ll say what you see on screen, obviously, is like many drafts. In the original draft, yes, it was sexualized, but not as much as it is right now and I just had to get to a point of being like, you gotta keep it real. Sex is a part of your life. And thinking in terms of the story and in terms of our protagonist, Marcus is really navigating such a nuanced sexual space.

How can you be truthful with that? Right. What does it look like? What does it mean to be able to create characters who are sexual beings who aren’t afraid of it and then what happens when the sex becomes complicated with these characters? And how can we hold space for people being able to have agency over their bodies and being able to have agency within the sexualized act?

“Our love is beautiful, but so is our well-being….And that’s the type of Black queer love that I’m really interested in.”

You’ve spoken in the past about how it has taken you some time to get through those painful days after receiving your HIV diagnosis in order to turn it into a personal and professional triumph. With characters who are HIV-positive, like Lee (played by Ja’Mel Ashely), do you hope that folks who are also living with HIV can find that same sense of personal or professional triumph or even just some reflection of themselves on-screen while watching i need space?

I loved how you said it, because we know everyone’s journey is completely different. Me being loud, me being proud, I exist in the space of being able to be vocal. It took me some time, as you mentioned, to get here, but this is my journey. Everyone’s journey is different. There are folks living with HIV who don’t want to disclose. And that’s their prerogative. So, that’s why I connect so much to when you said people’s personal sense of reflection, because what does that look like for each individual? We are all on our own journey. I think the thing for me that is so important is getting to the root, which is stigma.

“What does it mean to be able to create characters who are sexual beings who aren’t afraid of it?”

It is the systems that are in place that make individuals within specific identities feel less than. So, how can we get to the root of the stigma that exists? How can folks that exist outside of these identities do the work to shift things so that me and my communities can just exist. Speaking of living with HIV, being queer, and being Black, how can folks outside of these identities do the work to create a space where we just get to be whatever that means? That’s what I’m really interested in.

What do you ultimately hope for viewers to get out of i need space?

Questions like that are always so tricky for me, because one thing I know to be true is that everyone will bring their lived experience to the work. Folks will take away whatever they want or whatever they need to take away. But if there is any acknowledging that, if there is anything that I hope people take away from i need space, it is that healing is possible.

We all have trauma that we’re navigating through, some more than others, but we all are navigating through trauma. I hope that folks can clock that and can realize it can hold space for healing and how possible healing is and how important it is to choose our well-being. We deserve all of these beautiful things, and that includes being able to heal.

Rest is always next. Prioritizing rest. But in terms of work, well, two things. So my husband and I have a production company called the Each Other Project. I’m speaking into an existing production company right now. It exists as an organization, and we create a lot of digital content, short films, and digital series. And about two weeks ago, we filmed a short, which I’m super excited about. I wrote it, I directed it, I produced it. One, my husband was also a producer. He was the line producer. And we had an amazing team. We had an amazing cinematographer, amazing costume design, and production designer. And so that is one of the things that’s in the near future. And so super excited about that. We’re in the edit phase of the short right now.

But in the immediate future, I’m actually in the rehearsal space for my next play, which is going up at Manhattan Class Company (MCC). Performances start May 12. That’s in about three more weeks for a play of mine called Soft. It follows a teacher in a juvenile boarding school, as he navigates his students after an unspeakable act happens and he really wants to make sure that his students understand and hold on to their softness, particularly in a world that constantly tries to destroy and crush their softness. And I’m super excited about people being able to experience this play, particularly Black and Brown people being able to experience this play.

Honestly, I just have to give you your flowers because the things that you are doing out here to just push and propel identities, representation of Black folks, queer folks, and folks living with HIV, it’s just so needed. So, thank you so much for everything you do.

Thank you. It truly is an honor and it’s a pleasure and a privilege to be able to hold space and be able to chat with someone about my work, Particularly someone who I can see myself reflected in. That’s not lost on me because that doesn’t always happen. Which to say, we need you and I thank you so much for creating the space and for holding space.♦