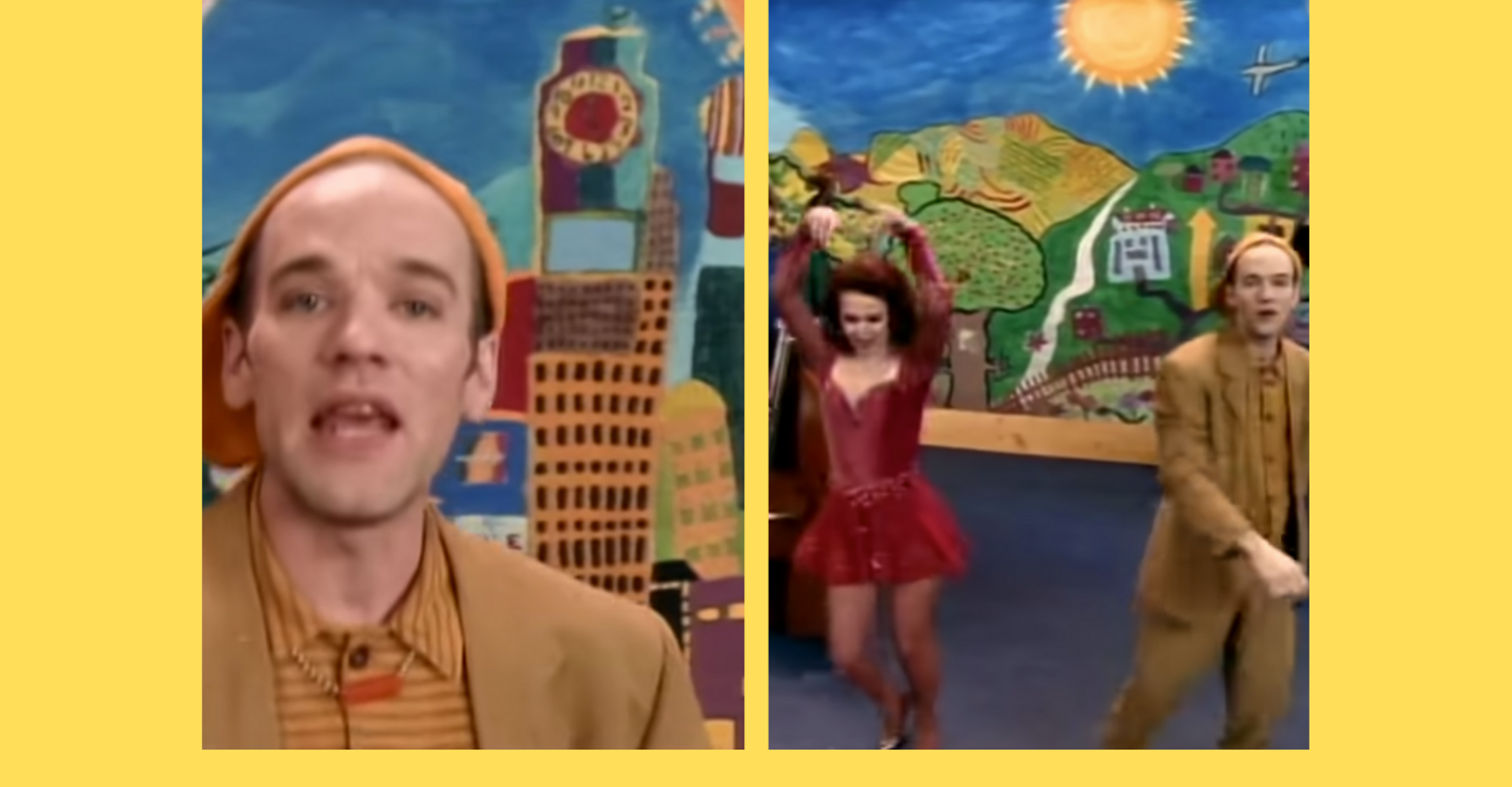 2021 marks the 30th anniversary of Out of Time, the album that launched R.E.M. to worldwide fame. The lead single “Losing My Religion” reigned over the airwaves, with Peter Buck’s mandolin riff and Michael Stipe’s plaintive vocal seemingly ubiquitous. Hey, it was the 90s.

The follow-up single, however, threw many new fans for a loop. “Shiny Happy People” sounded like a singalong from a children’s TV show. (Sesame Street agreed when, years later, they invited R.E.M. on to perform the song, reworking it as “Happy Furry Monsters.”) The bouncy, playful song sounded out of place amidst the album’s catchy, thoughtful rock. Was it a private joke? The result of a lost bet with U2?

Considered in the larger arc of their career, however, “Shiny Happy People” fits right in. Not only that, the song also offers insights into Stipe’s own sexuality. Rumors swirled at the time. Was he gay? Queer? HIV-positive? Ever enigmatic, Stipe simply let the rumors circulate without making a definitive statement. But for those listening closely, the answer was there, waiting to be shared with those in the know.

Was “Shiny Happy People” a private joke? The result of a lost bet with U2?

Forming in Athens, Georgia in the early 1980s, R.E.M. established itself as the definitive “college rock” band. Pairing Rickenbacker riffs with vocals that resisted easy interpretation, they became the darling of eggheads everywhere. Even given their underground status, R.E.M. weren’t really what you would call a “queer band.” Sure, Stipe wore dresses onstage and painted his eyebrows, but such theatrics often got received as just that—artsy rockers having a lark. Dig into their discography, however, and the clues became apparent.

Going all the way back to Murmur, their first LP, R.E.M. started a pattern of including what you could call a “novelty song” on each of their albums. Murmur features “We Walk,” a loping, bouncy track that sounds like an outtake from The Lawrence Welk Show. “Don’t Go Back to Rockville,” off their sophomore album Reckoning, is a country-western ballad that sees Stipe polishing off his best George Jones imitation. Fables of the Reconstruction’s “Can’t Get There From Here” is a soul funk workout that has no real equivalent in the rest of their discography, with Stipe going full-on southern preacher.

Even given their underground status, R.E.M. weren’t really what you would call a “queer band.” Sure, Stipe wore dresses onstage and painted his eyebrows, but such theatrics often got received as just that—artsy rockers having a lark.

Before “Shiny Happy People,” perhaps the standout among the novelty song sub-canon was, well, “Stand.” When recording the song, they threw seemingly every goofy idea from pop music history at the wall and saw what stuck. There’s the hurdy-gurdy melody at the beginning; the clink-clink of a xylophone at the chorus; the truly over-the-top wah-wah pedal guitar solo during the bridge. The music video amps the campiness factor up even more. Dancers gyrate on an enormous compass, performing a rotating version of the Locomotion, while film strip footage plays in the background. Stipe, at the end of the video, breaks down in laughter at the whimsy of it all, hiding his face from the camera.

These novelty songs don’t much sound like R.E.M. Perhaps that was the point. But they do sound an awful lot like another band: the B-52s. That unmistakable resemblance hints at the true role of the novelty songs. They form the queer sub-canon of the R.E.M. discography.

The B-52s formed in the same place as R.E.M., Athens. The college town was a hotbed of musical innovation in the late 70s and 80s, as covered by Grace Elizabeth Hale in her book Cool Town. R.E.M. would go on to become the biggest band to come out of Athens, but the B-52s put the town on the map. After honing their act in local clubs, the B-52s made the charts with their self-titled debut in 1979.

These novelty songs don’t much sound like R.E.M. Perhaps that was the point.

The B-52s are a queer band. Most of the band members are gay. Guitarist Ricky Wilson tragically of AIDS in 1985, at the age of 32. Beyond that, their whole aesthetic is deeply, joyously queer. Fred Schneider cavorted around the stage like a punk Frankie Avalon. Kate Pierson and Cindy Wilson wore enormous bouffant wigs and performed slinky girl group moves. The grab bag of their approach to sound, melding everything from sci-fi soundtracks to avant-garde noise, bespeaks of an everything-goes queer style.

Members of R.E.M. and the B-52s knew each other well. Athens at the time was one of those vibrant scenes that thrived on its isolation from bigger cultural centers, fostering a creative environment where everyone knew each other. Musicians and artists were constantly bouncing ideas off each other. So it makes sense that, when Stipe was searching for a way to express his queerness while working within R.E.M.’s college rock framework, he would look to his friends.

The influence of the B-52s comes full circle on “Shiny Happy People.” Stipe even makes this explicit by inviting Kate Pierson to sing backup vocals on the song. She adds her distinct B-52s inflection to this giddy song about communal togetherness. She appears in the music video too, resplendent in a sparkly maroon dress that looks like something Loretta Lynn would wear when playing the Vegas Strip.

R.E.M. would go on to add more entries to this queer sub-canon. Highlights include “Tongue,” which sounds like the theme to a birthday party at a roller rink in 1977, and “At My Most Beautiful,” a loungey track that recalls the Beach Boys. But “Shiny Happy People” remains the cornerstone, the song that makes it clear what purpose these songs serve. It’s the sound of Stipe being utterly himself, and not caring if anyone notices or not.♦