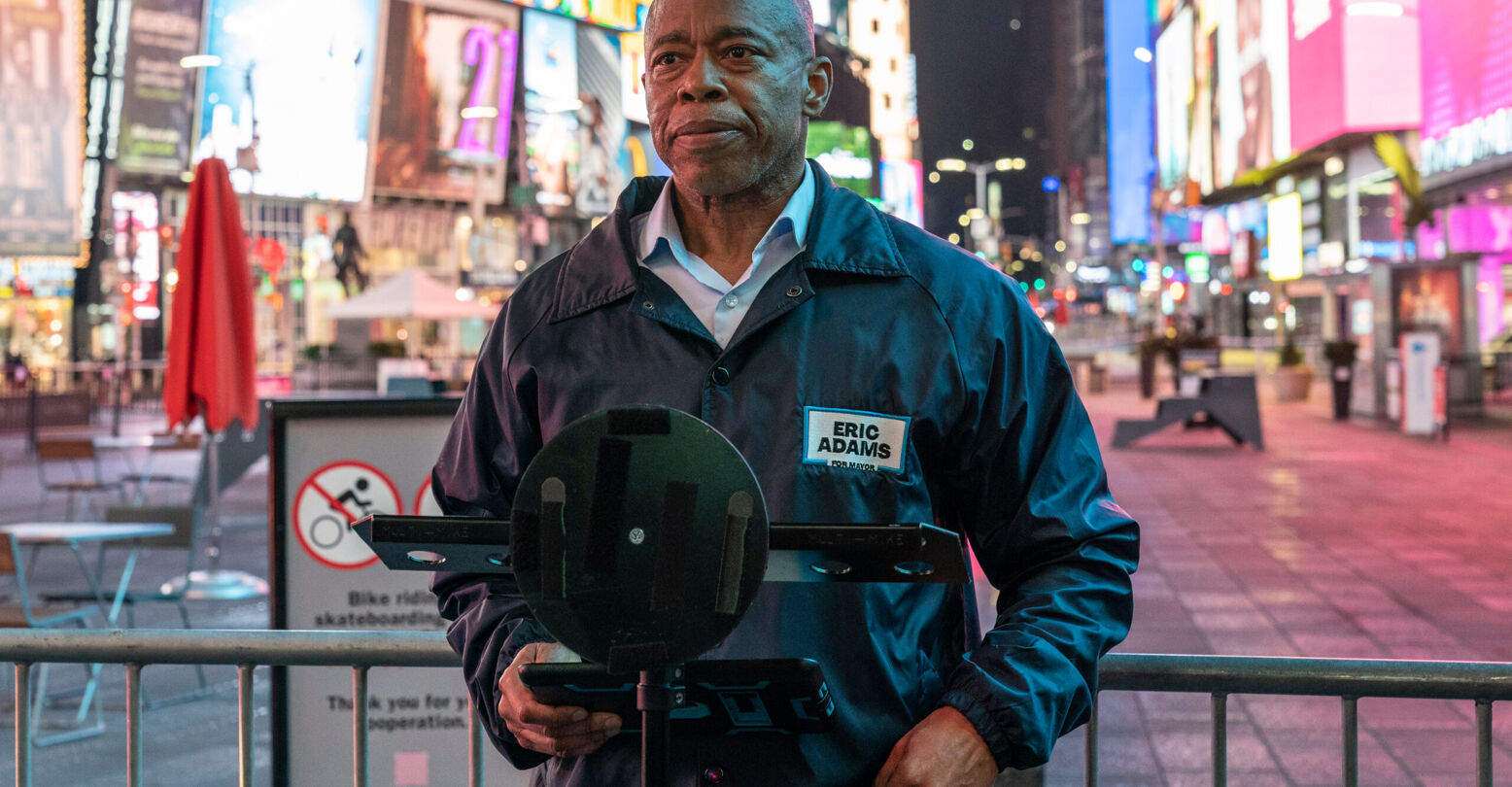 Fernando Cabrera, a former New York City councilman and conservative Democrat who tried to primary Rep. Alexandria Ocasio-Cortez (D-NY) in 2020, is being considered for an appointment in the administration of New York City Mayor Eric Adams (D) — or, at least, Cabrera seems to think he is.

Politico New York first reported on February 3 that Cabrera was the likely appointment for Mayor Adams to lead the Office of Community Mental Health, a renamed office known as ThriveNYC under former Mayor Bill de Blasio (D) and ran by his wife, Chirlane McCray. The New York Post also reported a source told them that he was the “preferred” pick.

Despite the Big Apple’s liberal or leftist reputation, Cabrera ran on opposing abortion and same-sex marriage throughout his 12 years representing the Bronx in the New York City Council. Not only did he win easily in 2009, 2013, and 2017, but he was chosen as the Majority Whip for the Democrats in the council from 2018 to 2021. meaning he was tasked with maintaining order and assisting the Speaker (out politician Corey Johnson) and Majority Leader in shaping the agenda.

As whip in 2019, he notably chose not to punish Councilmember Rubén Díaz Sr., another conservative Democrat who condemned Johnson as a “homosexual married to another man” and claimed the Council was “controlled by the homosexual community.” While the Council voted near-unanimously to dissolve a committee led by Díaz, Cabrera abstained and didn’t support any measures of further action against him and calls for censures and removal fell short. (Díaz then ran to represent the Bronx in Congress, but lost the primary to then-councilmember Ritchie Torres, who became the first out Afro-Latino Congressman in American history in 2021.)

Cabrera, a former Republican, failed in two primary challenges for the State Sen. Gustavo Rivera (D) in 2014 and 2016, and dropped out of the Congressional race he launched against Ocasio-Cortez in 2020 to run for Bronx Borough President in 2021 — a race he also lost.

But he was most known for travelling to Uganda after they passed a “Kill the Gays” bill, a law that calls for gay people to be imprisoned for up to life (it originally allowed the death penalty as an option) in 2014.

In a video posted himself, Cabrera said to an audience, “Godly people are in government [here]. Gay marriage is not accepted in this country, even when the United States of America has put pressure, and has told Uganda, ‘We are not going to fund you anymore unless you allow gay marriage,’ and they have stood in their place. Why? Because the Christians have assumed the place of decision-making for the nation.”

Cabrera started and serves as the lead pastor of New Life Outreach International Church, which — as Gay City News reported — says on its website, “the exclusive covenantal union of one man and one woman.” He also supports the Alliance Defending Freedom, an organization deemed an anti-LGBTQ hate group by the Southern Poverty Law Center (SPLC).

He previously ran the graduate mental health and counseling program at Mercy College. He’s also a graduate of the evangelical Liberty University.

Now-Mayor Adams reportedly hoped to reward Cabrera with the opportunity after Cabrera supported him in the contentious primary last year. However, Politico‘s report immediately sparked a backlash from LGBTQ politicians and advocates. When asked at a press conference if he would appoint Cabrera to head the mental health-focused office, Adams said “no,” but did not elaborate further or rule him out of future endorsements.

“While we don’t typically comment on the appointments process before an official announcement, we want to be clear — the administration is not considering appointing Fernando Cabrera to this critical position,” the Mayor’s Office said in a statement to Gay City News published on February 4. However, Politico reporter Sally Goldenberg stood by the publication’s report, which she co-wrote.

This weekend, Goldenberg reported in Politico that Adams is still considering Cabrera for a position. A spokesperson for the mayor reiterated in a statement that Cabrera won’t get appointed — but this time they specified “for the critical role of leading the Office of Community Mental Health,” signaling he may still get another gig.

Cabrera is so sure he’s getting a job soon that he “has been showing up at a municipal building across the street from City Hall while he awaits his assignment in the Adams administration, three people familiar with the matter” reportedly tell the publication. He was spotted in City Hall on Thursday by reporters, but did not respond to any of their questions.

Goldberg further said that she could not confirm that Cabrera is not already on payroll, despite not getting an announced appointment yet.

It wouldn’t be his first controversial hire: Adams, a former police officer just entering his sixth full week handling mayoral duties, tried hiring his own brother (another former officer) to be his executive director of mayoral security at a $210,000 salary. After backlash and reviews by anti-corruption officials, Adams’ brother was cleared to serve as Senior Adviser on mayoral security for a $1 salary last month.

City Hall confirmed Cabrera would NOT oversee Office of Community Mental Health but would not rule out other jobs and declined to say whether he is earning taxpayer money while awaiting his new job. (That should be easy-to-come-by public information. Alas.)

The story has started to expose issues between them and former de Blasio staffers — who are already using the alleged appointment to criticize their successors.

Gary Belkin, a part of organizing NYCThrive under de Blasio, told Politico when Cabrera was still believed to head the mental health office, “This is a mayor who’s talked eloquently about the needs of government to step in and go upstream, I hope we’re not sliding downstream only for a mental health approach.”

Then former de Blasio communications staffer Bill Neidhardt and Adams’ deputy Chief of Staff Menashe Shapiro had a Twitter-fingers exchange, where Neidhardt referred to Cabrera as “a virulent homophobe.”

It's quite obvious that "quote for hire"@BNeidhardt knows nothing about standing up an administration for EVERY New Yorker. Mayor Adams' transition has been guided by leaders from every City Hall dating back to John Lindsay; if he hadn't cut and run in September he'd know that.

lol is this about you trying to appoint a virulent homophobe?

Or it could be about tapping an unregistered lobbyist for EDC?

Speaking of tapping, maybe it's about appointing a co-conspirator in a FBI wiretap case?

Oh! Maybe it's about Dep Mayor for Housing? Who is that again? https://t.co/IDrPdBVn3C

.@BilldeBlasio and @NYCMayor may be pals but their staffs are decidedly not. https://t.co/Dkn8oQDEMb

Anti-LGBTQ groups are already coming to Cabrera’s defense. Bill Donohue, president of the Catholic League, an anti-LGBTQ organization, wrote an article for “CNSNews.com,” a website ran by the Media Research Center, itself a right-wing non-profit that also opposes marriage equality. Donohue calls those that oppose Cabrera “extremists in the gay community” and says he is “no bigot.”

The editorial board at the New York Post, owned by conservative media giant News Corp., also went out of its way to defend Cabrera. The paper called for the Office of Community Health to be ended altogether because, as ThriveNYC, the office was nothing more to them than a “incoherent grab-bag of programs,” but they also state, “We have no particular beef with former City Councilman Fernando Cabrera.”

“Why is it okay to hire a well-known homophobe to be part of your administration anywhere, anywhere in this city?” Allen Roskoff, president of the Jim Owles Liberal Democratic Club — an influential local LGBTQ Democratic group — told Politico. “No matter what the job is, you shouldn’t be hiring bigots — I don’t care if he’s going to work in a stock room. The gay community does not feel that this administration has its back.”

Previously, Roskoff said hiring Cabrera “insults every member of the LGBTQ community” and “would be similar to appointing David Duke to head the B’nai B’rith.”

The New Pride Agenda wrote in a letter more than a week ago to Mayor Adams, “While it is possible for two individuals with differences of opinions to work together, Mr. Cabrera’s comments are immoral and deeply out of touch with not only the views of New Yorkers, but a majority of Americans.”

Others like out state Sen. Brad Hoylman (D) and the organization Housing Works have also weighed in:

.@nycmayor, our communities need a city government we can trust. Fernando Cabrera is an anti-choice homophobe. We call on you to condemn bigots, not empower them. https://t.co/6Gmcrfycf6

As an LGBTQIA elected official, I'd be outraged if the Mayor of New York City — the world capital of tolerance and multiculturalism — appointed an avowed homophobe to any position in city government. https://t.co/6yoBVOJyt1

As an LGBTQ+ ally and someone with mental health background, I am particularly horrified that its for a position charged with delivering community mental health services.

Meet Fernando Cabrera, the man Eric Adams is considering to head the his Mayor’s Office of Community Mental Health.

He is also staggeringly anti-LGBTQIA (https://t.co/gwaCe2YfyQ). In 2014, he lauded Uganda as a Christian nation after it passed its “kill the gays” bill. https://t.co/Hw5Ql9SNB2

An e-petition from Equality New York in favor or demanding Mayor Adams “to not hire homophobic pastor” Cabrera has begun to spread. The number of signees thus far was not publicly available as of this writing.

Please take a moment to let Mayor Adams know that we will not accept an anti-LGBTQI individuals in government here in NYC! https://t.co/CrhIy4q0k7 pic.twitter.com/YMlsGg41GM

We don't need anti-choice homophobes leading in any capacity in NYC government. Take action with @EqualityNewYork and tell @NYCMayor that we deserve better than this.