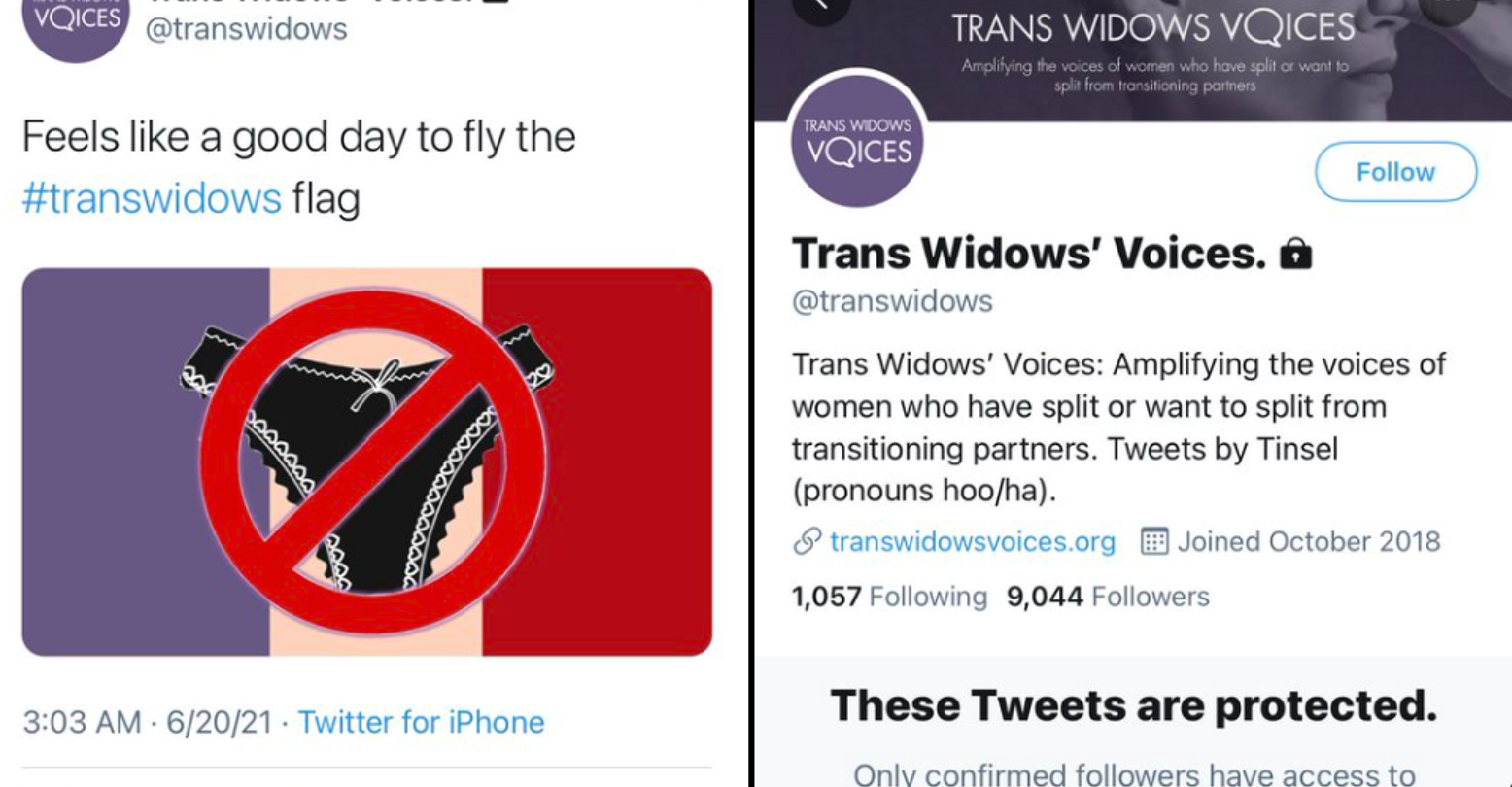 That said, the world as a whole is getting a lot less rude as cis people figure out how to talk to (and about) trans folks in respectful ways. Sometimes, however, things get rude enough that we still have to intervene. As in the case of today and “trans widows.”

For the more info focused the tldr on trans widows is they argue to keep the “spousal veto” part of the GRA.@EHRC have basically already said it doesn’t appear to be lawful and they are looking to bring action to remove it.

“Trans widow” is a horrible term that is used by some resentful cis women whose ex-partners came out as trans during the relationship. They compare “losing” their partner to transition to the death of a partner – hence the term “widow.” It’s gross on so many levels.

They even made a flag, which is just…extra in the worst way. It’s literally a pair of underwear over the French flag?? Like…what?

Whenever I see the words “Trans Widow” I think of the trans women who’s partner died but i guess that makes too much logical sense 😥 https://t.co/77QrLXYY1R

Wait, what are you talking about?

The term “trans widow” has been floating around for a while now on the cis Internet. It refers to cis folks whose partners have transitioned.

So why is that offensive?

Well, for starters, it implies that no one will love us after we transition (even the people who were previously in a committed relationship with us) while suggesting that it’s more important to center the pain of cis spouses than the pain of transition itself.

No trans person wants their partner to feel abandoned or excluded during the often years-long transition process. But trans folks have been taught our whole lives that it’s more important to center cis people’s ideas and opinions than to trust our collective gut. So when a cis partner complains about “losing” the person they love, it’s a form of erasure. Hey, that person you love? They’re still right there. They’re just going through some changes, which is actually quite a normal thing to do within a relationship. Plenty of relationships fall apart in the face of change, and this is just one facet of that. The idea of the “trans widow,” however, brings an assumption of violence to the proceedings. And that’s just not fair or accurate.

How it started How it’s going pic.twitter.com/negev0MBdL

Okay, so what words should I use?

Thanks for asking! Instead of saying “trans widow,” maybe just refer to yourself as someone who’s going through a transition in your relationship. That’s all you have to say! You don’t have to claim victimhood or place yourself at the center of someone else’s transition! Just be honest with your partner and yourself about what’s bothering you.

Is there anything else I should know?

Yes! If your partner is going through transition or just came out, you’re going to have a lot of feelings about it. That’s totally fine and normal. However, try not to dump all those feelings onto your partner. They’re already dealing with a lot. This is a great time to reach out to your therapist (preferably someone who’s well-versed in gender identity and queer history) and let them know how you’re feeling. Remember, there’s nothing wrong with feeling sad, upset, or confused. Just don’t let those feelings get in the way of your ability to support your partner and be there for them. This is hard for them too, and they need you now more than ever.

Being a good partner isn’t about not having complicated feelings when things change. It’s about knowing when and how to express those feelings in a way that doesn’t hurt your partner, especially at their most vulnerable moments.

Thank you for coming to my TED talk.♦