Get to know Fran Tirado, a writer, editor of all things queer and co-host of the Food4Thot podcast. Learn about who he believes is a queer icon, his thoughts on love, what he feels insecure about, his advice for LGBTQ+ youth and more. 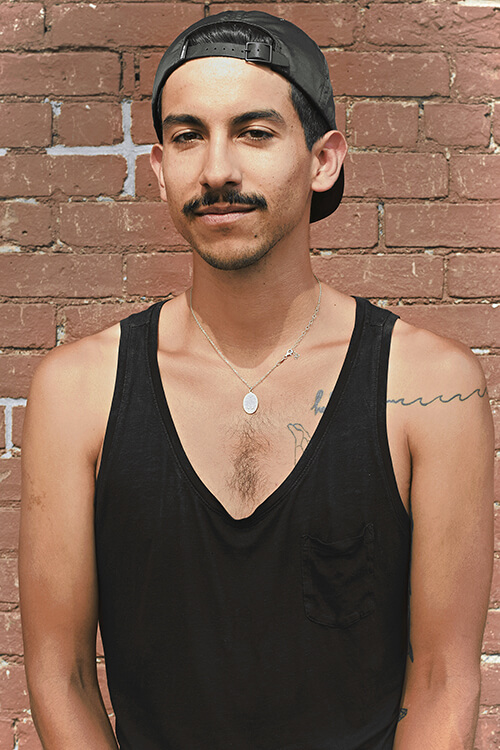 1. What do you love about the LGBTQ+ community?

I love that by just being queer, you’ve been given permission to be extraordinary. Not extraordinary in the sense that you have a superior ability or are fundamentally better than anyone, but extraordinary in that you are different than the rest of the population and by definition, you are extraordinary. I think there’s something about that that is really beautiful and that every queer person or anyone on the spectrum should lean into.

2. Do you think it’s hard to make gay friends?

Yeah, it’s really hard, it took me a really long time believe it or not. Part of my job is meeting up with other queer people and you would think that would make it a lot easier to make friends, but it’s still really difficult. Figuring out how to make a professional relationship into one that should be more intimate or friendly is hard to do and I feel like I have just come into my own friend group in New York in the last year. Before, it was just a huge array of people that I met socially and were just acquaintances and not necessarily friends. I think navigating intimacy and friendship can be just as hard as romantic ones.

3. Who is someone you consider to be an LGBTQ+ icon?

Miss Piggy. She has such a good sense of self, she truly understands who she is in this world, she knows how to maneuver her way around. She is a body and a personality that has been pushed aside and marginalized. She is a woman who is not conventionally attractive, she’s body positive, she’s loud, opinionated, obnoxious, and a woman and all those things are not championed in the mainstream. I think the way she’s able to break the glass ceiling of being accepted in the mainstream and own it to no end, makes her a fantastic queer icon.

4. What’s a song you consider to be an LGBTQ+ anthem?

5. What’s advice you have for LGBTQ+ youth?

You are not broken and you never were.

No, unfortunately. I believe in infatuation, I believe in beautiful companionship, but I don’t believe in it for me. The really cliche answer is that love can encapsulate all of the different ways that you can love someone. I think when we think about love and how we define it, that all of my pre constructed ideas of what love is and everyone else’s pre constructed ideas of what love is, are a fallacy and if I give into believing that, it’s just gonna hurt me, so it’s better for me to believe in really amazing companions.

7. What values would you like in an ideal partner?

The most life giving cultural forms I have had in the last five years.

Best given to yourself.

10. What hopes do you have for the LGBTQ+ community in the future?

I hope that we can just understand each other across differences. Especially in times of crisis, sometimes for matters of safety, we homogenize ourselves and all of the gays will conglomerate together, the lesbians will conglomerate together and trans/non binary people hold spaces together and we all kind of sequester ourselves and that sequestering creates a lack of understanding or more an unwillingness to understand different queer identities.

I know a lot of gay people in my life who don’t have trans friends and nonbinary friends, and it doesn’t allow yourself much insight into what your community actually is. I’m not asking everyone to be best friends, but I do think when you don’t go out of your way to find friends across differences, you will have no means of understanding how they work and what their needs and priorities are and how you can help them. I think in the truest sense of the words if i want to believe in a version of the queer community, it’s reaching out to people across difference, because I don’t think we’re doing that enough.

11. What do you feel most insecure about?

It’s very different now, it used to be terrible. I was a fighter, I was the quintessential, rebellious teenager and I hated it, and I hated my family and now they’re some of the most restorative people I know. When I’m with them, it’s really comforting. We fight a lot, we’re all opinionated, we butt heads, we love confrontation and fighting but that aside, we all get each other and we all have a lot of fun.

13. Have you found your chosen family?

Not the chosen family because there’s no quintessential chosen family that is your ride or die and you have them forever, but I have found a chosen family that means a lot to me right now and I hope that they stay with me forever. But if they don’t, I will know that they have helped me through a very difficult part of my life. They make me feel held. I’m not an intimate person, I don’t have a lot of feelings or needs, but the ones that I do have are built by my friends. They know when I need something and they come to my group chats, digitally hold me, and it’s beautiful.

14. What is the title of the current chapter of your life?

Woman on the Verge of a Nervous Breakdown.

16. Did you ever / still feel uncomfortable holding another guys hand?

17. What are deal breakers for you when dating someone?

18. How much does your LGBTQ+ identity play into your overall identity?

It plays into every facet of my life. My identity is my queer identity. I wake up in the morning and what I have for breakfast is influenced by my gay identity and that’s how I feel. Being queer enriches my life, my decision making, and my identity. When I hear queer people say “I don’t wanna be queer, I want to be normal, I want to be a queer person that gets along with normal people.” I find that when people say that, that they could potentially be missing out on a greater landscape of what their identity can be.

I want to wake queers up. I hope that I will have woken queers up. I feel like the last five years of my work has been about creating representation, and about reaching out to a version of me that was 15 years old, stuck in the Midwest, didn’t know a single queer person, had never seen a single queer cultural form, had no idea with no means of seeing any reflection of themselves, and the last five years have been about creating reflections for kids like that. I’ll continue to do that, but I feel like my work has transitioned into reaching out to people who are closer to me and waking them up to a greater nuance or understanding of what it means to be queer and a greater social consciousness of what it means to take part in this community. There’s nothing wrong with the gay community, but I’m constantly seeing us fall short. I want more from us and I hope that within five years, I will have woken some people up.

It gives me confidence. There’s a kind of supremacy that comes from my queer identity that makes me feel like I’m floating above a lot of people sometimes and that sounds really arrogant because it is. I carry myself with the confidence that I have because I’m just excited to be queer. I feel like when I enter rooms and when I enter straight spaces, I have command over those spaces because I’m different.

Stay up to date with Fran and his work over on Twitter and Instagram, and be sure to check out the Food4Thot podcast wherever you listen to podcasts!