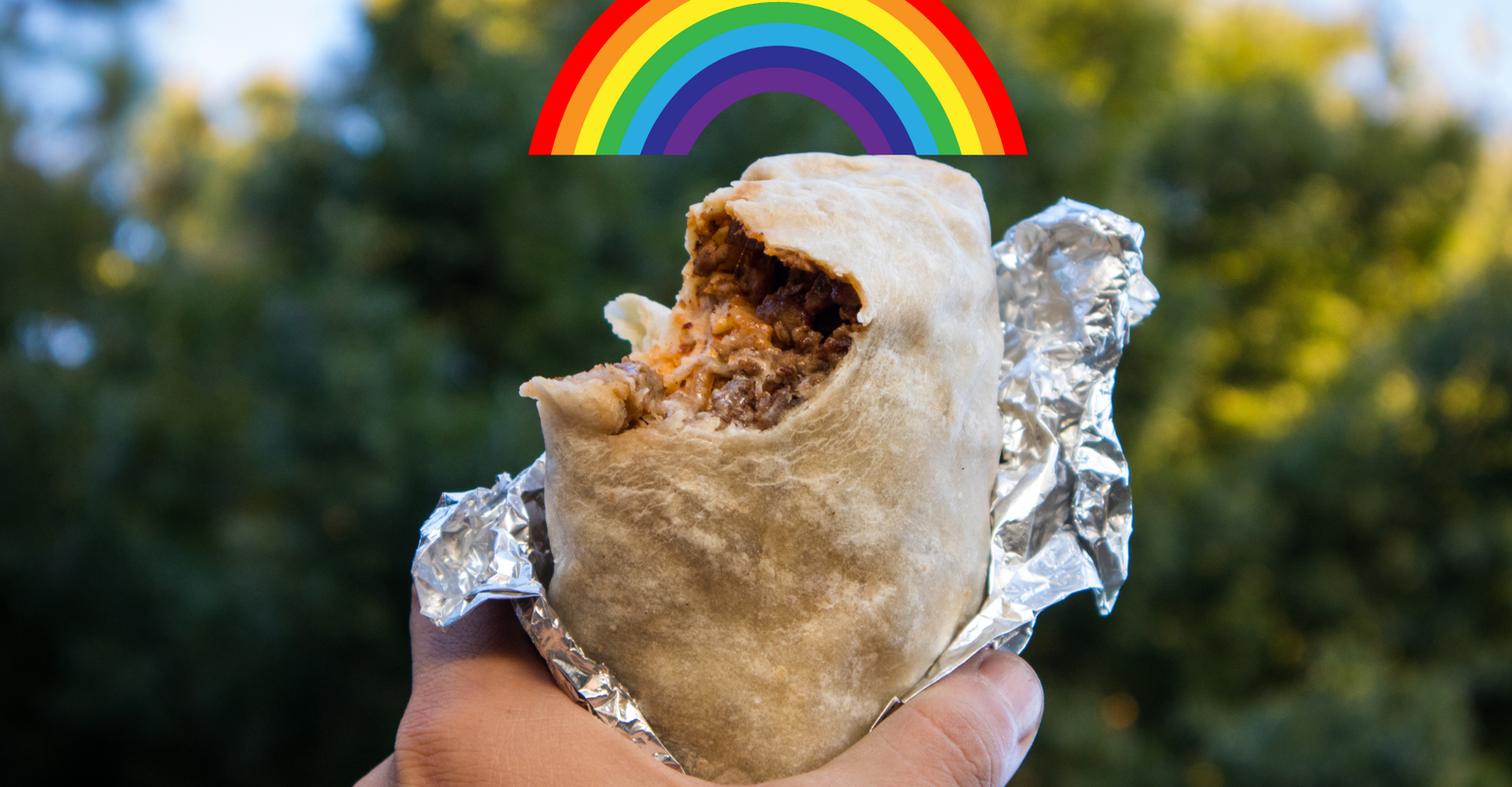 Once upon a time, there was an incredible scam.

We were all 19. Figuratively: “19” is a lifestyle and a mindset. The point is, we were kids all touring with our punk bands, wearing the same clothes every single day.

The game was simple: Call or walk into a Chipotle franchise location. Tell them you’re in a touring band (because you are) and say, “I heard Chipotle has this policy of feeding touring musicians for free.” This was not true, but, you see, it was. It was true because every single attempt fortified the lie. Every win was a win for the collective “we.” And we actually won, a lot.

Touring myths have always existed, and, similarly, many generations of degenerates have believed in “Dumpster Gods,” who giveth in the form of Halloween pencil packs, goat cheese, pecan pie, winter jackets.

It was true because every single attempt fortified the lie.

Punk musician Pat The Bunny (retired) shared with me that, around 2006, the prevailing touring punk myth was that if you were to get a Waffle House tattoo, then Waffle House as a company was committed to feeding you for free, for life. He couldn’t name anyone who actually attempted this, but my guess is that, in the anarchist autonomous zones that are most WH locations, the staff would probably give you a “Haha what?” or a “Whatever, girl” and feed you for free, because, well, who’s gonna know?

Ducky (last name withheld) shares that there may be a taco place in Minneapolis that offers a tattoo deal. She’s the kind of person who used to dumpster (verb; to “dumpster” is to search the contents of a dumpster for loot) florist shops around Valentine’s Day and sell bouquets on her college campus. An easy $700.

She adds, “I’ve joked about tattooing WaHo’s logo for free product so many times it’s really not a joke anymore.”

In 2014, I was in a punk orchestra that toured the East Coast, Southeast, and Midwest. 23 people, 7 cars, three fire-breathers, two accordion players, of which I was one. Circus klezmer acoustic pop punk. Folk-adjacent skater rock. Aggressively unlistenable.

One could say that touring musicians have an obsession with food: It’s hard to find. It’s expensive. There’s no way to save it long-term. Our ultimate folly as humans is an addiction to sustenance. It’s a weakness.

So, on the road, we got desperate. We turned to crime. Kevin liked to steal from convenience stores. There was a gig where Ruune jumped behind the counter of an unmanned concession and tourist-type place to steal a hot dog, with the bun. Vid begged the closed Wal-Mart Subway for packets of mayonnaise and mustard. Berry had a trick for confusing Taco Bell cashiers so that they’d get an order wrong and just give her the “correct” batch and the “fuck-up” batch at the same time.

On the road, we got desperate. We turned to crime.

But the holy grail was Chipotle.

Statistically, the chances of success were inversely proportional to each city’s relative population density. If it was too big of a college town, and they’d nearly throw you out for asking. The Northeast was never successful. The South and Midwest were more amenable. Boone worked, Greensboro didn’t.

Stevie, of Adult Mom, and Bruce, formerly of Adult Mom, frenziedly recount successes and strategies from 2014 to as late as 2020. Bruce shares that, on a double tour with another band, eight different Chipotle locations in Salt Lake City were tried. Stevie theorizes that larger city franchises probably spend their weekly allotted comp spots much more quickly than in smaller cities and towns, backing up my conjecture that population density is a useful metric, but they insist that it wasn’t a scam at all.

“It’s interesting that you’re saying ‘a hustle’ because we have always been upfront essentially,” says Stevie. “We’re a band on tour and are in need of a meal, is usually what we go with. We will only lie to pose as like, the band manager, but that’s as far as it goes. Maybe that’s why it’s been successful for us too?”

I have a certain fondness, I must say, for capitalism loopholes that aren’t exactly crimes. Timing Wawa’s daily mass clear-out of hot sandwiches and running to the trash like human rats. Stealing 150 copies of the same book from a college library dumpster. Walking into an establishment and genuinely asking if there’s any food they want to give you. Manifesting your success. Vision-boarding. Confidently asking and being rewarded with a “yes” based on respect for the boldness alone.

I can tell you this for free: If you live in an apartment building with coin laundry, look up the makes and models of the washers and dryers, and type that into eBay. You can find the keys. You know, for the “landlords.” They always need replacements.

I have a certain fondness, I must say, for capitalism loopholes that aren’t exactly crimes.

Some on Reddit, specifically user “dillabetes,” posting in the r/TouringMusicians subreddit, seem to be convinced that the Chipotle company policy is real, and not just a self-fulfilling scam we’ve all convincingly written into the annals of DIY history: “I was thinking about how it’s an unspoken rule with bands getting free Chipotle. Chipotle doesn’t acknowledge it or sponsor artists, but most locations will give you free/BOGO coupons if they have them available. Starting out I could never find how to do this, but eventually I learned from others to call ahead and talk to managers, you can almost always at least arrange buy one get one free for your band.”

My one and only success was Boone, NC, 2015. I only ever tried it twice, because I was always happy to eat whatever collective house “curry” was being served to us by hosts, and I was married to dumpstering, and not potentially inconveniencing anyone.

Nick, a music photographer, shares, “We would each in the crew review the ones that did it online on Yelp, Google, and online corporate.” The bands he toured with would never give CDs or other merch, but, for me, that’s the exception to the general rule. To make the transaction as exciting as possible for the staff, you usually try to big it up; you’re rockstars, they’re going to say they knew you before you were big, and they might even wear your shirts, or play your CD in-store.

At this point, mid-pandemic, in the dystopian hellworld that is 2021, it is extremely important to note that this was never about getting one over on the workers. We were always on even terrain with each other. Off-tour, some of us were right there behind the counter.

This ecosystem that is class consciousness in the contemporary United States is fertile soil for solidarity, for light and harmless criminal activity, for shoplifting from CVS, for people like Anna Delvey, for dumpster divers, for Depop flippers, for mutual aid, for decarceration, for feeding friends and strangers.

And when we return to the road, free bags of chips will be there for us.