To celebrate Asexual Awareness Week, INTO spoke with Mary Palmer and Kat Kellermeyer, a same-sex couple who lives in Salt Lake City, Utah. Mary, 23, identifies as a biromantic asexual, but Kat, 30, is queer. This is Kat’s first time dating someone along the asexual spectrum.

In a 45-minute phone conversation, they tell us what makes their relationship work.

How did the two of you meet?

Mary: She came to my house. There was a party and she showed up with a friend of hers and obviously I live here. The first thing I noticed about Kat was that she’s really, really loud. It’s very rare that someone can force me to listen to them talk for more than a few minutes at a time. Everything that Kat says is really interesting and it’s really impassioned.

Kat, were you always aware that Mary was asexual, or was that something that you found out later?

Kat: As we were starting to date, she was really up front about it. She was really honest that it had been a stumbling block in other relationships. But emotionally she is such an amazing companion and intellectually we get along so well.

I was like, “I’m not going to jeopardize all of that because there’s just one hiccup.”

Was she the first asexual person you dated?

What was it like dating an asexual person for the first time?

Kat: It challenges your idea of what traditional roles in a relationship are, this idea that if you are not having sex somehow your relationship is broken or it’s not going to work out. We are in an open relationship. Even though we know that I’m allowed to see other peopleand the same for herright now we both have agreed to work on us first and really get a strong base so we feel supported, then we pursue that.

Mary, what was it like to come out to Kat as asexual?

Mary: Kat mentioned that I was very up front about it. Kat is actually the first partner I’ve been up front about being asexual with because I fought the label for a long time. It’s something I would sneak into a relationship: “Oh, by the way, I have just this really low sex drive.” But it never worked. Women always figured out that something was wrong. I told Kat right away so that if it ever becomes a problem, I can move on right now. It was nerve-wracking because I really liked her and I didn’t want it to be a dealbreaker.

In what ways has it been a deal breaker for previous partners?

Mary: I don’t mind sex. I think of sex the same way other people would probably think of building a birdhouse. If you told me I could never build another bird house, I would say, “All right.” Generally it’s kind of a pleasant activity, but it’s not something I think about. So I will tell my partner, “Hey, if you want to have sex with me I probably won’t engage you sexually, but if you want to have sex, let me know and we can have sex.” It always sounded really reasonable to me.

Being in relationships with sexual people often brings out their insecurities. In previous relationships, it wasn’t that the sex that was the problem. It was the fact that I didn’t want itthat was the deal breaker. That would boil over into other things. I don’t think I’ve had anyone straight-up break up with me because I was asexual, but it was definitely an underlying factor.

In your current relationship with Kat, has being asexual presented any challenges?

Mary: Every relationship comes with its own unique set of problems. I think our biggest problem is that Kat has trouble telling me when she wants sex. I’ve told her several times, “Listen, you’ve got to talk to me. I can’t read your mind. It’s not something I’m thinking about, so you’ve got to tell me.”

We had a really good talk about it recently, and she’s going to try to be more open to telling me what she wants and what she needs.

Kat: It goes back to these ideas of breaking down toxic monogamy and expectations there. Sex is very much considered quid pro quo. If one person’s getting off, the other person had better be getting off. Mary is just staring at the ceiling because she’s just kind of indifferent to it. It felt wrong to approach her because I did have that established idea of quid pro quoshe’s not interested so it’s not fair necessarily for me to express interest.

What do you find to be the biggest misconceptions about either being asexual or being in a relationship with someone who is asexual?

Kat: If Scarlett Johansson was naked in her bed, all she would want to do is ask what it was like to work with Joss Whedon.

What do you find to be the biggest misconception about being in a relationship with an asexual person, Kat?

Kat: The biggest misconception is the idea that before a relationship can be rewarding, there has to be some sort of sexual element to it. I’ve been in relationships where you make eye contact across the room and then you immediately get it on. And that’s it. They never really last. You burn through it pretty quickly. There’s nothing here but that kind of animal magnetism.

I hate the term “old souls.” I hate it. But it feels like that with Mary. Our conversations are a lot more complex than relationships I’ve been in before because we’re both such pretentious up-our-ass intellectuals. I find that to be very rewarding and emotionally nourishing.

I have some friends who tell me they think it’s crazy or it’s not going to last. And I say, “I don’t know. I really fucking like this girl.”

Mary: Who is this? I’m going to go kill them.

It’s finding that emotional sustenance in your relationship. A lot of people who are in really great sexual relationships might never find that. So I’m really lucky to have found what I have. We’re just going to get a little creative with how I get sexual nourishment, and that’s not hard to find. 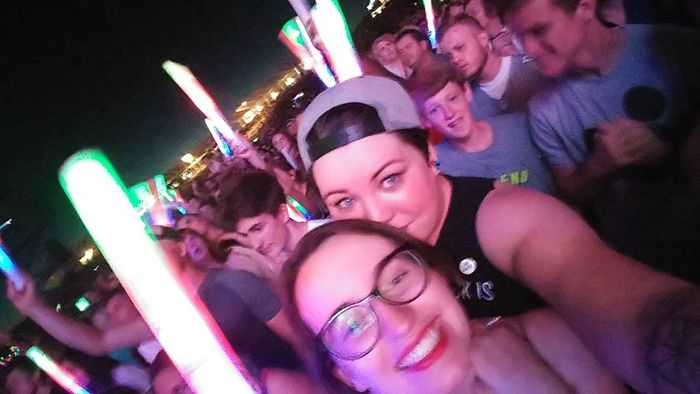 In terms of getting creative, can you just explain what you mean by that?

Kat: That means I’m taking care of me, or like I mentioned, we’re in an open relationship. So I’m allowed to go and seek elsewhere. The night that I asked her to officially be my girlfriend, I was expressed to her, “I don’t know if polyamory can work. I’ve never been in one of those relationships.”

But the way she described is that we’re like the coolest kids on the playground. We’ll go hang out with other kids that we find. They’ll be really cool and we’ll have a lot of fun with them, but at the end of the day, we’re going to go home and be with each other. Because we’re the coolest kids on the playground and we’re each other’s best friend. It’s her being able to trust methat I’m always going to come home to herand me being able to trust that she knows she’s the number-one person in my life.

I really feel like we’ve found that trust and emotional fidelity that I haven’t really felt in a relationship before.

Kat: That’s one of the reasons I feel so safe in this relationship: We both recognize that we don’t have to be everything to each other. What we bring to the table is enough for each other, and any other sustenance we need we can go somewhere else and find. I feel like a lot of monogamous relationships fail because you break under the pressure that you have to be everything for your partner. You have to fix all their flaws, make them into the perfect person, and break yourself in half to become perfect for them.

That’s not fair for any of us to do to each other.

What do you think makes your relationship special?

Mary: I don’t that there’s anything inherently wrong with monogamy. But I think that there are certain attitudes that can arise from monogamy that can end up breaking a relationship. Like the idea of ownershipI’m Kat’s girlfriend, I’m not her jailer.

If you trust someone and you love someone, you don’t feel like you need to possess that person like you’re a demon. I don’t see why you can’t share that person with other people. I’m not saying that everyone has to. Some people just aren’t built that way, and that’s totally fine. I don’t think any less of them.

For me and Kat, I trust her. I don’t feel like I own her. I want her to be able to seek everything that she needs.

Kat: It fits. It’s so cliché and stupid and squishy, and I hate us. We’re so fluffy. It’s gross.

What do you think that other couples can learn from relationships between asexual and sexual people?

Mary: I would say that there’s this romanticization of a love that is all-consuming. But mine has never been like that. I don’t think that love has to be all fire and passion. Love can’t last on ignition alone. You have to put the work in and there has to be a strong foundation. Adult love doesn’t demand that you be anyone but yourself, and it doesn’t make you compromise who you are. There’s bending and then there’s breaking.

I’ve forced myself into a lot of relationships, and I’ve pretended that I’m not the way I am just to make it work. And it always falls apart. I can’t be anyone besides who I am.

Note: The interview has been condensed and edited for clarity.