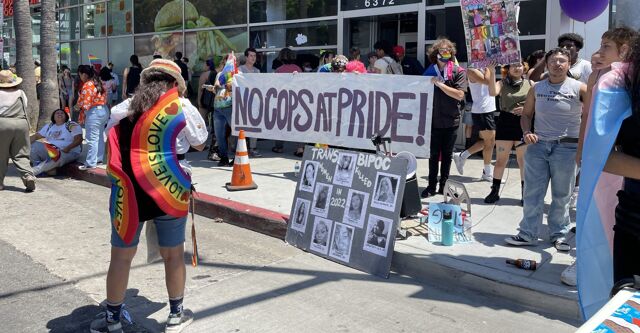 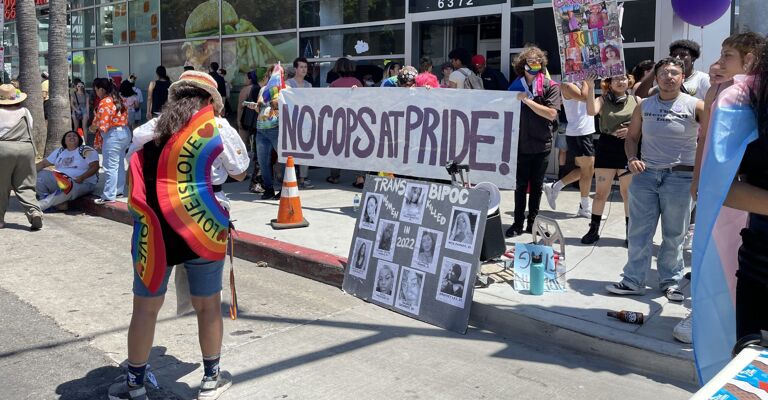 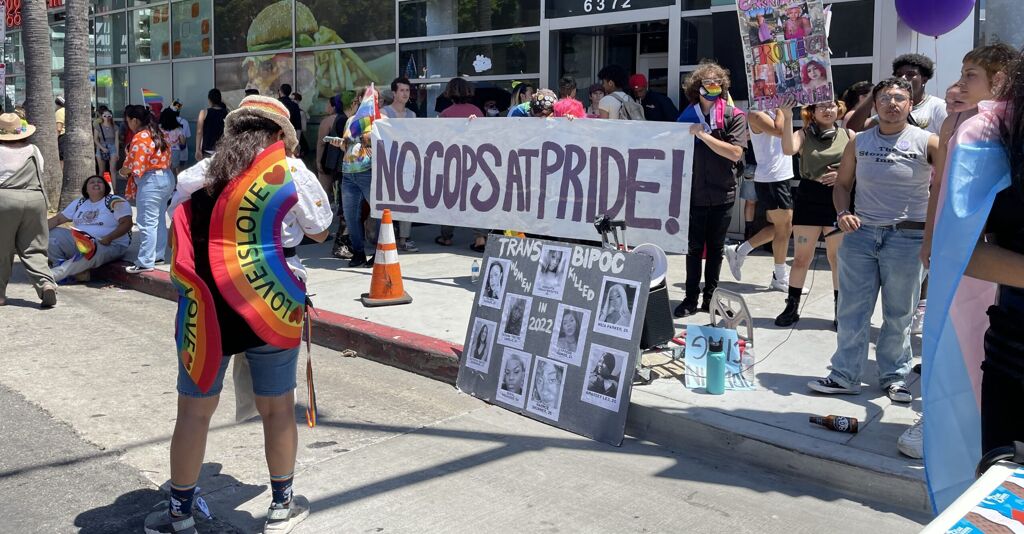 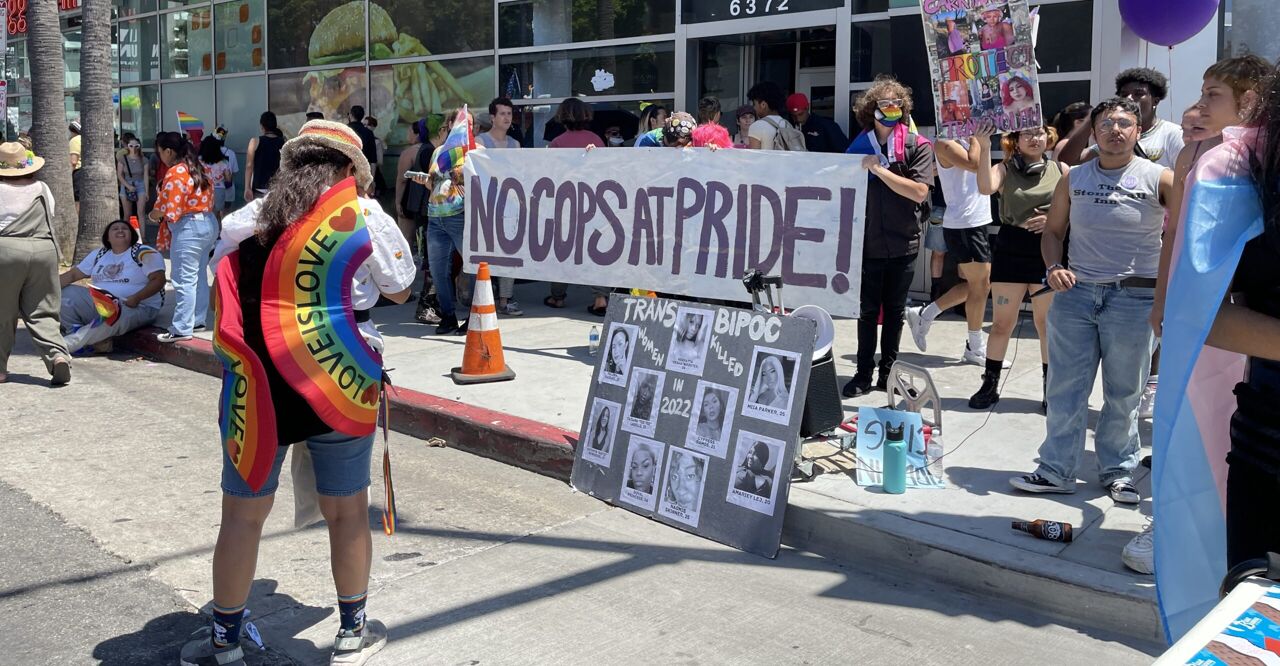 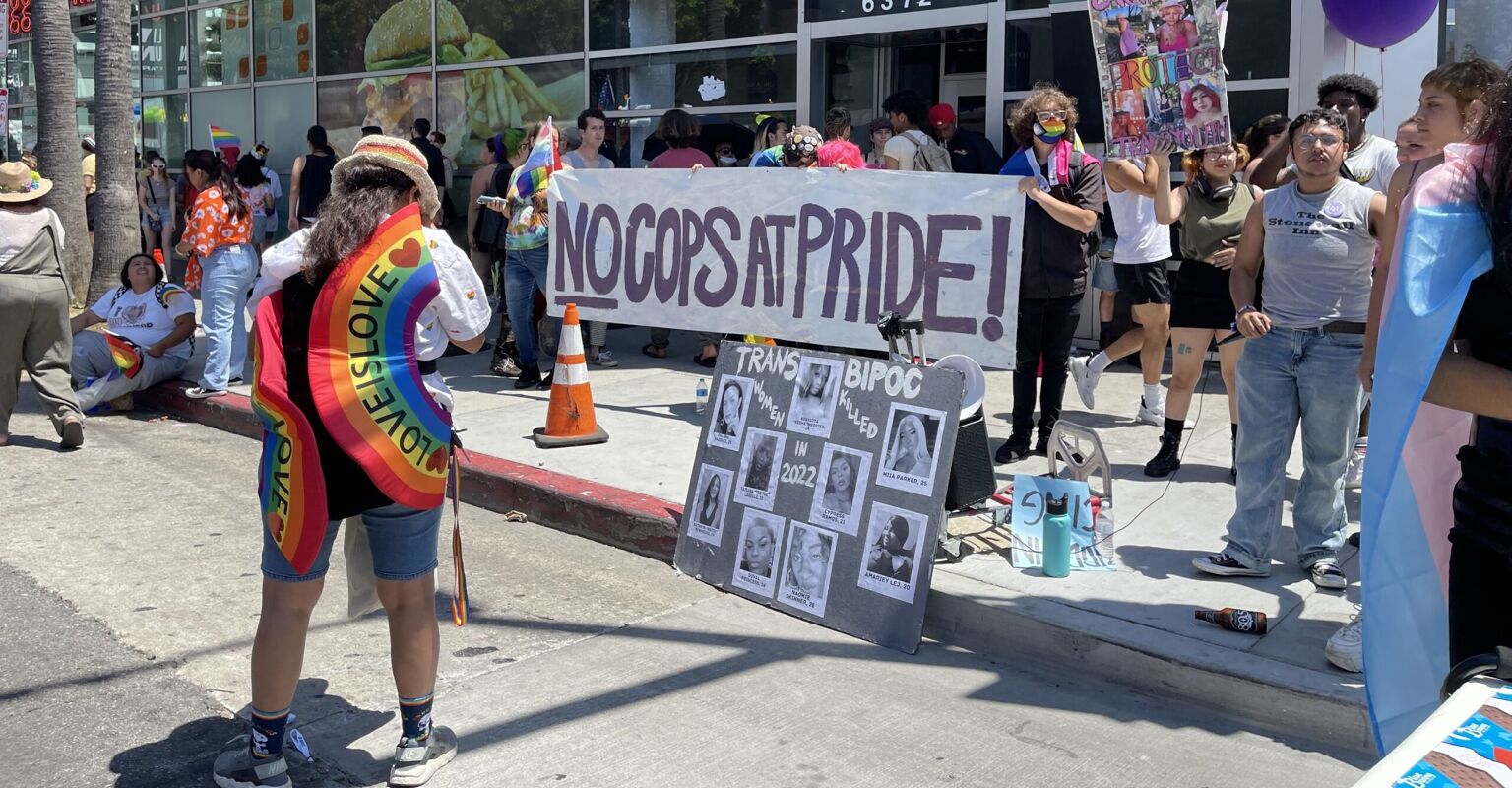 I went to Brooklyn Pride a few weekends ago. Police and their vehicles lined the side streets, and out-of-uniform cops marched in the parade. As the NYPD’s viral tricked-out ‘Gay Pride Cruiser’ sauntered down the street, boos rained down from different sides, “Boo! Cops out of Pride!” Some of the crowd was confused, some shuffled around awkwardly, some joined in.

The presence of police at Pride is a divisive issue. From interpersonal skirmishes to serious political rifts, organizers of Pride events have labored through varying levels of impassioned disagreement on the subject.

Opinions proliferate, but there are generally two camps.

One camp believes that police should be welcomed into Pride spaces on account of the ethic of inclusion that broadly shapes queer/trans politics and sociality, expressed here as the desire to include anyone who would “walk alongside” queer and trans people, even if only symbolically. They want to include queer and trans police workers who would like to bring their full selves to Pride celebrations, not cordon off parts of themselves as is so often demanded of them. And finally, such proponents believe—at least a good number do—that police keep (queer and trans) people safe. Under the constant threat of anti-trans/queer violence, the police are viewed as a protection, as evidenced by the apprehension of the Patriot Front convoy in Idaho.

The other camp believes that police should have nothing to do with Pride. Police should not march, either in uniform or out; they should not be allowed to roll through in yassified cruisers; they should not work security, neither inside the parade nor along its perimeter; they are not welcome at all. This is camp maintains the tradition of anti-police sentiment and action typified by the Stonewall revolt that catalyzed the gay liberation movement. They appeal to the violent history of policing in which queer and trans people were profiled, brutalized, and disproportionately incarcerated. Indeed, they would say that this is not only history, but present reality, as LGB people are incarcerated at three times the rate of heterosexuals, and transgender people are incarcerated at eight times the rate of cisgender people.

The violence that queer and trans people experience at the hands of police is not only disproportionate, but also acutely and specifically brutal. 59% of sexual assaults in U.S. prisons were committed against transgender people, and correctional and patrol officers are responsible for about half of the assaults. Further, Black and Brown queer/trans people suffer the brunt of this abuse, as a famously racist carceral system intertwines with entrenched queer/transphobia, producing an intersectional and non-reducible particularity to the antagonism that renders Black and Brown queer/trans people pursued and fugitive as a rule. The police harass and abuse the poor and homeless, of which queer and trans people are disproportionately representative, safeguard colonial-capitalist interests against Indigenous peoples (including queer, trans, and Two-Spirit), and protect the private property of the capitalist from the subjugated and exploited worker. The police, domestic and military, are combatants on the side of the U.S. imperialist war machine, torturing and massacring queer and trans people all over the world.

There are far more reasons to be critical of the police, but the point is made. The ‘pro’ side sees liberating potential and a promise of safety in the inclusion of police at pride; the ‘anti’ side sees police as a fundamental enemy to queer and trans people locally and globally.

Many people take up positions on either side of the issue out of ignorance. They simply don’t understand where the other contingent is coming from, and they flow with what they know. But once both sides of the debate are understood, the factor that determines one’s convictions on the issue is how one understands one’s own trans/queerness. One’s politics of queerness—in my opinion—is what adjudicates one’s position on police and their function as agents of the state, and the gender, sexual, racial, and economic interests that the state consolidates.

The dichotomy is this: is your desire for assimilation into the liberal democracy of the U.S. empire, to take up the American Dream and mirror the world of the cishets? Or is your desire to disrupt the status quo, to disorganize the violences of the U.S. empire and its attendant cultures of oppression, and fight for a different, more liberated world?

The police exist to protect and serve the status quo, to safeguard historic arrangements of power, to be foot soldiers of empire, capital, and whiteness. If you only desire your queerness to fit into this order, then cops are surely your friends and allies. But if you understand your queerness to be a counter-antagonism against the forces which dispossess, cage, and kill, then cops cannot be your friends, they cannot march alongside you, they cannot weaponize your identity to legitimize their violent work.

The police exist to protect and serve the status quo, to safeguard historic arrangements of power, to be foot soldiers of empire, capital, and whiteness.

This requires seeing past the farce of representation, past the queer and trans enforcers of laws that were written against them and their kind, past the glitzed-out police cruisers flashing their lights in rainbow colors. Will those flashing lights be any comfort to the fugitive being pursued by the contemporary slave catchers? Is a rainbow-colored nightstick any solace to the beaten? Are mayors donning rainbow pins any help to those can never be protected by a white supremacist state or the agents that enforce its will?

Do not let the world-breaking, world-building power of your queerness be co-opted by those who would only retrench the deathly powers of the status quo. Do not let it be stolen, watered down, domesticated, or incapacitated. Our solidarity can win far greater victories than inclusion into the death-making arrangements of the world.

Remember that in their best moments our forebears and elders loved and protected one another against—and in spite of—the order maintained by policing; they stole to feed themselves and one another, they trespassed to find shelter and flee police, they loved against the law and lived against the world. They were illegal in their very being, and they threw bricks at cops.♦