2017 was by no means a good year to be on the internet, but one beautiful piece of social media emerged from the otherwise hellish year: Facebook’s LGBTQ Pride react button. Throughout last June, the social network offered a little rainbow flag reaction button—right alongside the “Like,” “Angry,” and “Wow” buttons—to those who “liked” the LGBTQ@Facebook page and to “major markets with Pride celebrations.” And for 30 glorious days, it was fun to be queer online again.

But oh, how things can change in a year. Facebook told Business Insider it has discontinued all temporary reaction buttons, seemingly permanently. That includes not just the Pride button, but the Mother’s Day flower and the Star Trek ones they apparently did, among others. Now we all just “like” LGBTQ@Facebook for no real reason, which, fine. So rest in peace, The Gay Button. You were the only good tech innovation since the gif.

The Pride react wasn’t politically monumental or all that important. It was just fucking fun. Finally, we could label anything we saw on Facebook as queer. Photo of your friend’s bulldog puppy? Gay. Status update announcing a cross-country move? Gay. A shitty, bigoted rant from your racist aunt? Throw a Pride flag on it and see what happens. Your straight friends’ engagement photos? SO fucking gay. Performative allyship from that girl who called you a dyke in A.P. Bio class? Angry react, duh. Don’t let that idiot off the hook. But pretty much everything else? So, so queer. We could plaster adorable little rainbow flags to whatever we chose, declaring everything “gay” simply because it’s Pride Month. What a dumb, fun online thing. 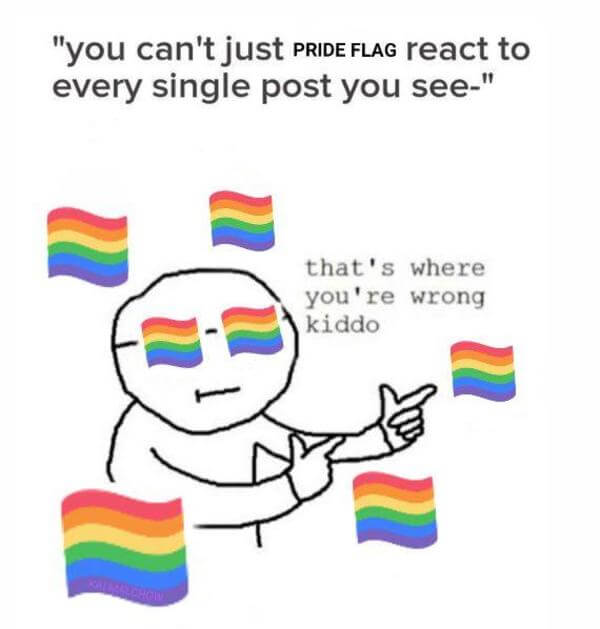 A little rainbow flag isn’t technically an emotion (as “Like” or “Wow!” sort of are), so what did it actually mean to react “Pride” to something? Does it matter? Our use of the Pride react didn’t have to make actual sense; indeed, it was more fun when it didn’t.

This year, Facebook has rolled out Pride-themed photo filters, stickers and status backgrounds, so you can drape gay flags all over your own content as much as you please. But the rainbow react was incredible because we, as queers, were labeling other things queer. The Gay Button let us scream our LGBTQ pride all over our feeds, for all our friends, family, and acquaintances from middle school summer camp to see. Cheekily labeling the mundane daily content we always see on Facebook as “gay” was a way of occupying a largely heteronormative space, a.k.a, our social media feeds. Dare I suggest it made Facebook cool again?

But let’s not get ahead of ourselves. Facebook’s tacit endorsement of Pride Month is really no better than any other corporations’. It’s painfully trendy for companies to blast rainbow signage each June, as if that does anything to better the LGBTQ agenda. Even the FBI tweeted a Pride Month message the other day, and their history with the gay community, uh, ain’t great. This type of messaging is the laziest (and often, a downright manipulative) way to engage with queerness. In 2018, the LGBTQ community is still being denied rights on institutional levels; a little rainbow logo from a mega-corporation isn’t doing anything.

So yeah, Facebook’s Pride button was barely meaningful, but it was fun! It echoed the simpler days of the internet, when it wasn’t an eternally burning pile of diapers we can’t seem to put out or tear our eyes from. It allowed me to actually enjoy logging on to Facebook, something that hasn’t happened since the days of weekly 50-photo albums documenting dorm room pre-games. Since those days, Facebook has made countless useless updates, sold our data, and left the fate of democracy up to trolls. I can’t believe I’m still even on Facebook. But in June 2017, I got to fuck around online with my LGBTQ friends, and it was actually an enjoyable way to use the website. So, why not again in 2018?

Give the queers what we want—it’s Pride Month, after all. It’s only June 5, Facebook. You’ve still got 25 days.