In the summer, when everything feels rose-colored and tinged with nostalgia, I find myself craving ’90s rom-coms.

But watching these films often comes with a sense of distance. A majority of romantic comedies or dramas feature cis-het white couples. Growing up as a black lesbian, it was often difficult to relate to these films, which is something a lot of queer people — especially queer people of color — have to experience.

Finally getting access to queer films helped keep my faith in the rom-com quietly burning. I remember in high school seeing screenshots on Tumblr of two girls laying in a field looking dreamily in love, and thinking 1. what is this and 2. why have I never seen it before?

That film was The Incredibly True Adventure of Two Girls in Love, Maria Maggenti’s 1995 debut about two girls, Randy (Laurel Holloman) and Evie (Nicole Parker), navigating friendship, families, and their sexuality as their last days of high school come to an end. 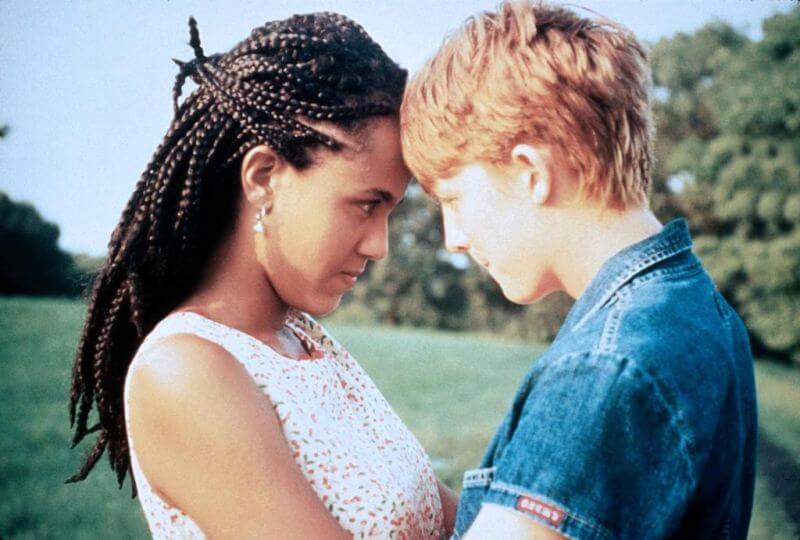 Evie Roy was the first black teenage queer character I saw on film. And still, I can only probably count on one hand the number of times I’ve seen a black teenage lesbian as a central character in a film of the same genre.

There’s a lot that’s notable about Evie. She was incredibly stylish, levelheaded and witty, like your too-smart older sister who was also too cool for you. She was like many of the black girls I remember seeing in movies and TV in the late ’90s and early 2000s, except, unlike the others, she was gay.

The ’90s was a time when black womanhood was being intricately redefined in film and television. This was the era of Janet Jackson in Poetic Justice (1993), Stacey Dash in Clueless (1995), and Tatyana Ali in The Fresh Prince of Bel Air (1990-1996). A time when young black womanhood was asserting itself as independent, politically conscious, trendsetting, fashionable and progressive.

It was also a time when lesbians were making their mark onscreen. Films like Go Fish (1994), The Watermelon Woman (1996), But I’m a Cheerleader (1999) and Chutney Popcorn (1999) offered a glimpse into the worlds of young, vibrant lesbians living lives in their own communities while navigating a world that ultimately left them vulnerable and othered.

But you start to notice when combing through this era of remarkable work that there’s something missing:  young black lesbians. Specifically, lesbians in high school, coming of age at a time where they’re not only navigating blackness, but parameters of class and sexuality.

Coming out in high school is often difficult and dangerous, and black lesbians are a particularly vulnerable part of the LGBTQ community. Rarely we get to see lesbians, let alone black lesbians in this time of awkward, youthful courtship.

Young queer women of color navigating romantic relationships exist; we see this in Mosquita y Mari, Pariah, and The ‘Other’ Love Story, to name a few of my recent favorites. But this doesn’t negate the fact that whiteness still dominates the queer coming of age narratives we see popularized, and I often echo the same sentiment as Jamal Jordan: “as a child, I thought all gay people were white.”

Which is why it is important to place these often overlooked black gay women in the canon of historical and foundational queer media.

In The Incredibly True Adventure, it’s apparent that Evie navigates her worlds in the way that she does specifically because she is black. However, one of its first reviews said that “race is not an issue for the girls or for their friends,” echoing the sentiment that blackness within the film is something to be overlooked.

Her mother, an upper-middle-class, hardworking, and intelligent black woman, holds Evie to high standards. Evie was raised to be a strong black woman, expected to follow a path and set of rules that will deem her successful and respectable.

After eating dinner with Randy’s all-white extended family, Evie senses some unease and questions whether they don’t like her because she’s black. In breaking up with her boyfriend, she symbolically severs the ties that almost dutifully connect her to the conceptual black young male that was also redefining itself during this era.

Evie has to figure out how she fits into queer, black, and suburban worlds as they all intersect around her. 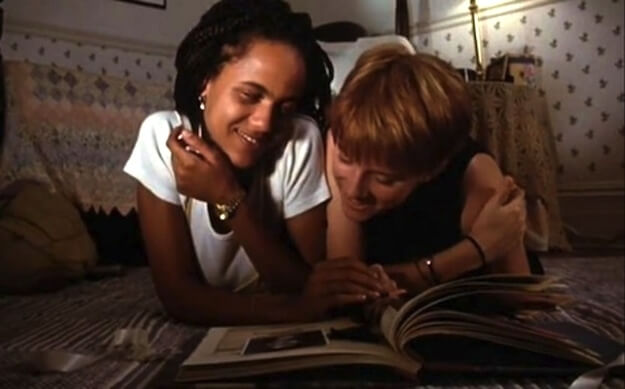 The Incredibly True Adventure of Two Girls in Love, sometimes corny, sometimes campy, sets the stage for this all to play out.

The film, in its “off” timing, is working on what theorist Judith Halberstam calls “queer time.” As noted by Autostraddle, “the hours do not follow a cyclical pattern, as the only time is supper time,” but it always being dinner time isn’t necessarily a bad thing.

The unusual pacing of the narrative gives off a perception of an eternal summer. Randy reads Leaves of Grass in front of an open window with a fan blowing in the background.

Crickets chirp in the yard as the girls sit curled around each other after dinner and kiss for the first time; shirts are cropped and delicately unbuttoned. There seems to be endless time for the two girls to talk in the car with the windows down, to lay beside each other in an open grassy field.

The film’s queer time attempts to make up for the time lesbians on (and off) screen have been left out of coming of age narratives.

It’s also what gives the film the opportunity to foreground Evie’s narrative — of the way race, class, and sexuality intersect in young black gay women’s lives — while also cultivating the dreamy, mythical landscape of the ’90s teen lesbian “summer” romance that we don’t get to see as often as we should.