Can the queer trans community ever have a rainbow without having to first endure rain?

If history proves anything, it’s that queer resilience by definition starts with the trans community. Despite that, the Atlanta queer community suffers from a stark absence of venues and spaces where QTPOC and QPOC can come together and coexist in peace.

Where their more affluent cisgender gay and lesbian counterparts have community centers, bars, and clubs where they can host events and cruise, the ATL queer and trans community of color does not have access to space they so desperately need. Southern Fried Queer Pride aims to change that.

Ahead of partnering with Red Bull Music Presents: ATL Is Burning, Taylor Alxndr spoke to INTO about resistance, queer narratives, and what it means to hold space at a trans event for cis people. 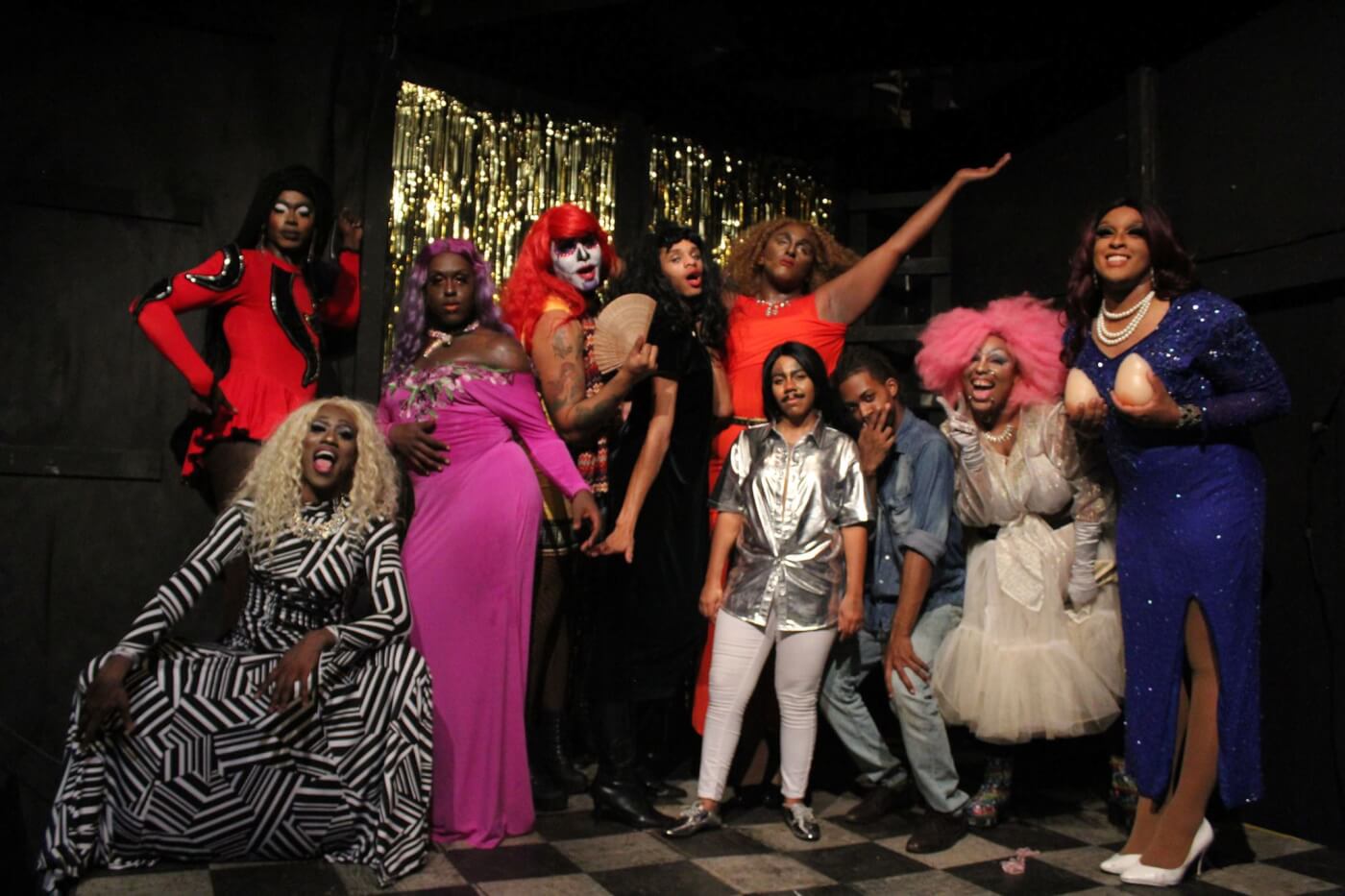 Tell me a little bit about yourself.

Well, I’m Taylor Alxndr. I am a queer and trans organizer, musician, and drag queen. I co-founded Southern Fried Queer Pride aka SFQP in 2014 with my best friend Micky Bee and we kind of started because there was a lack of space for queer and trans people of color and queer and trans artists that wasn’t corporate or assimilated. And there wasn’t really any kind of radical Pride resistance here in Atlanta, so we figure we might as well try to do a festival, so we put one on in 2015 in June, right around Stonewall’s anniversary and then from there, it kind of grew. We started off with the festival and now we’re a non-profit organization with two festivals in the southeast and 40 plus events throughout the year.

You mentioned resistance. What are QTPOC / QPOC in ATL resisting?

There’s so much to resist here. Obviously we have a culture of conservative politics and we have a lot of people in government and local government and higher positions that don’t want to be inclusive or part of other people’s struggle, but also a lot of southern queers are constantly resisting the narrative that being a queer in the south is an unbearable existence, that we don’t have any safe communities, that it’s just dangerous for us to be here, that we don’t have like a history, but I think [that’s] partially due to ignorance by media and just the perpetuation of the false narrative. We have so much history.

We have icons that have come from here. RuPaul is from Atlanta. We have our own version of Stonewall, our own icons, and we currently have so many amazing communities that not only are thriving but also resisting in a very beautiful way. So I feel like those are just a few of the things that people from the south, queers from the south are resisting.

How would you say gentrification specifically is affecting the ATL queer community?

Well, I think that if you look at the ATL queer community, there’s a split. There’s a more mainstream majority lesbian and gay community with expendable income that have access to certain spaces and mostly exist in your typical bar and club setting or the community centers that they’ve created. Then there’s the more queer and trans community that doesn’t have access to those spaces or resources so we have to build and create our own. I would say our community throws events in people’s houses and DIY spaces.

So a lot of the venues that we created events at and we’ve had festivals at that we’ve had organized meetings at are all DIY kind of art spaces or galleries, but a lot of those especially in the past year, have essentially completely disappeared. Gentrification started leaking into the more POC and queer neighborhoods and all those places have been displaced because they didn’t own the property they were using, they were renting. All these developers came in, they erased the scene, so the past year has been really hard for us and the fact that we’re trying to find our footing and we’re trying to find space, it’s leading us to be a little bit more intentional and way more direct with our mission, which includes, of course, creating official spaces that we own that won’t get swiped away if a developer comes through. 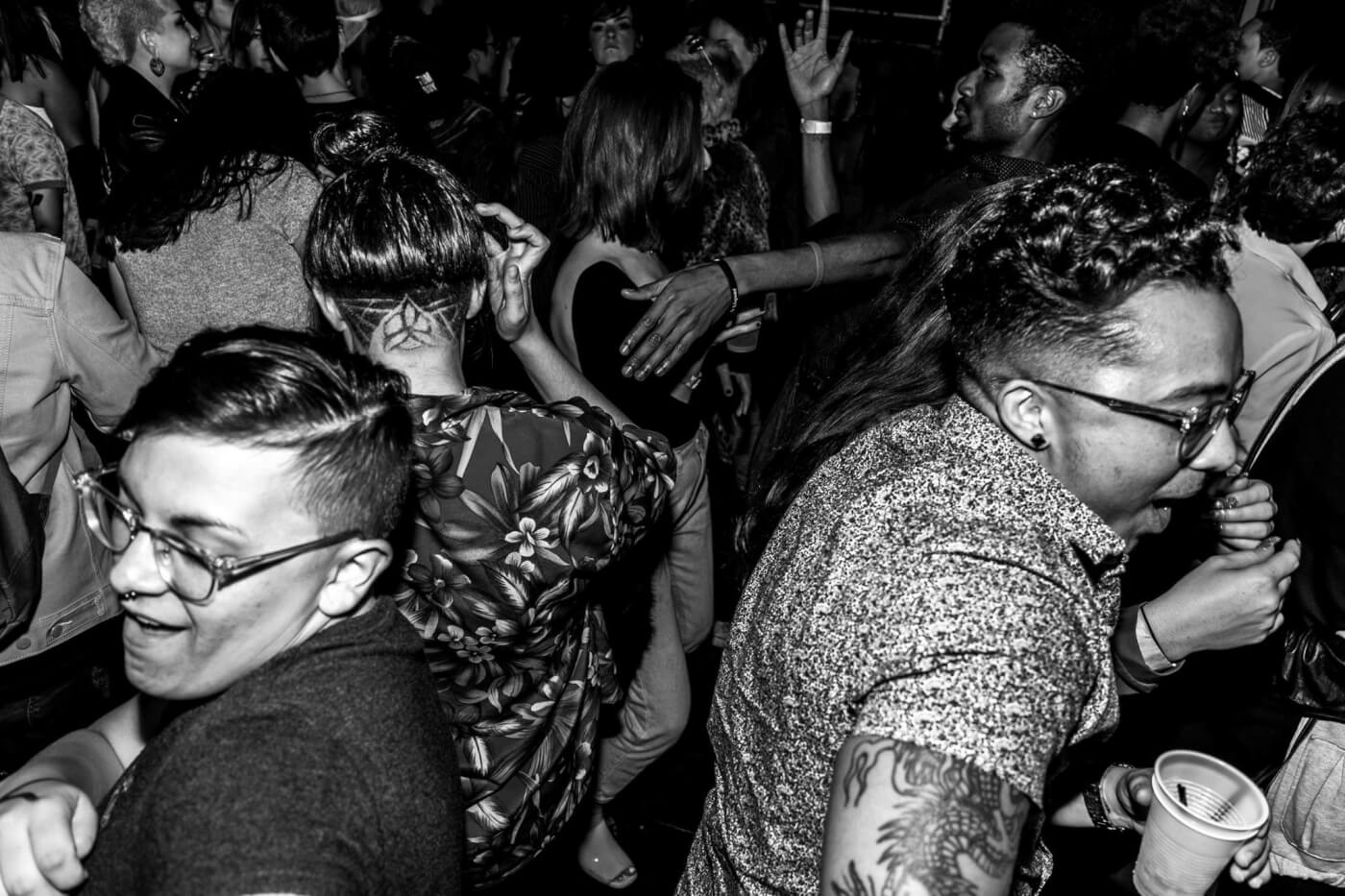 What else can you tell me about Southern Fried Queer Pride that you want other people to know? What is it, how long has it been around? What are your goals?

We prioritize ourselves as a queer and trans arts and advocacy innovation with the intent to uplift southern queer and trans people and their narratives and art forms. So our events range from community discussions and organizing meetings to galleries to film screenings, even to dance parties and drag shows and things like that. We just figure having a good variety of events is the best way to reach people because not everybody wants to go to the dance party but not everybody wants to go to the community town hall discussion so we have to meet everybody where they’re at. Our major goal is to continue to do what we’re doing and to acquire and own a space that we use at Atlanta’s currently owned, only queer and trans community center.

Atlanta currently doesn’t have an established community center. We have a lot of places that are offices for non-profits but not something that’s open to the community and is dedicated to the community. So that’s my major goal and I think right now it’s just a hard time of finding where to put that community center because we don’t want to be a part of that beginning process of gentrification. Usually when an art organization comes into a neighborhood or like buys a property, developers come look at them and then they come after the same property that they’re taking over, so artists can kind of be the first wave of gentrification. But we’re also just trying to figure out the best area to serve the community because in certain parts of the country, you’ll find a lot of like white or gay communities and certain parts you’ll find black and brown people, so we want to make sure that we’re intentionally positioning ourselves somewhere that’s comfortable and right for everybody in the community.

What is the community response to Southern Fried Queer Pride?

I think the community at first was very skeptical, when me and Micky, who co-founded SFQP, we were both still in undergrad. We were young, black, both queer and trans and a lot of people looked at us as just these two kids who had a lot of ideas and energy but I think the skepticism is often what led to a lot of lack of wanting to get involved and resources and things like that, but I think over the years, and especially with the way we’ve grown in organizing, we talk about the four main people that put on the first festival and then we have an organizing team of over 50, so I think people saw that we were operating with intention and with transparency and once we started developing more programming, I think people got on board and now it’s really beautiful because we started off a majority of young people and we still are but there’s people in their 50s, 60s that help us out. There’s people from different backgrounds and experiences that really kind of make SFQP this really unique hodgepodge of queers, so I think the reception at first was very skeptical but now we’re fully embraced and yeah, it’s a good feeling.

Why did you choose to be a part of the ATL Is Burning Ball on November 9th?

Red Bull reached out to us and to MORPH after noticing some of our work in the community. They asked us about what we would like to ideally put on.  We’d both been wanting to do a ball for a very long time, but we wanted to make it authentic and we wanted to have all of the resources to pull it off.

So we started meeting with Red Bull, started conceptualizing what the event would look like and settled on the name, “ATL Is Burning.” We worked with the council of the founding houses in the ballroom scene to ensure authenticity. We wanted to involve the people that created the ballroom scene. We’re really fortunate everybody was on board and so excited to make this a reality. 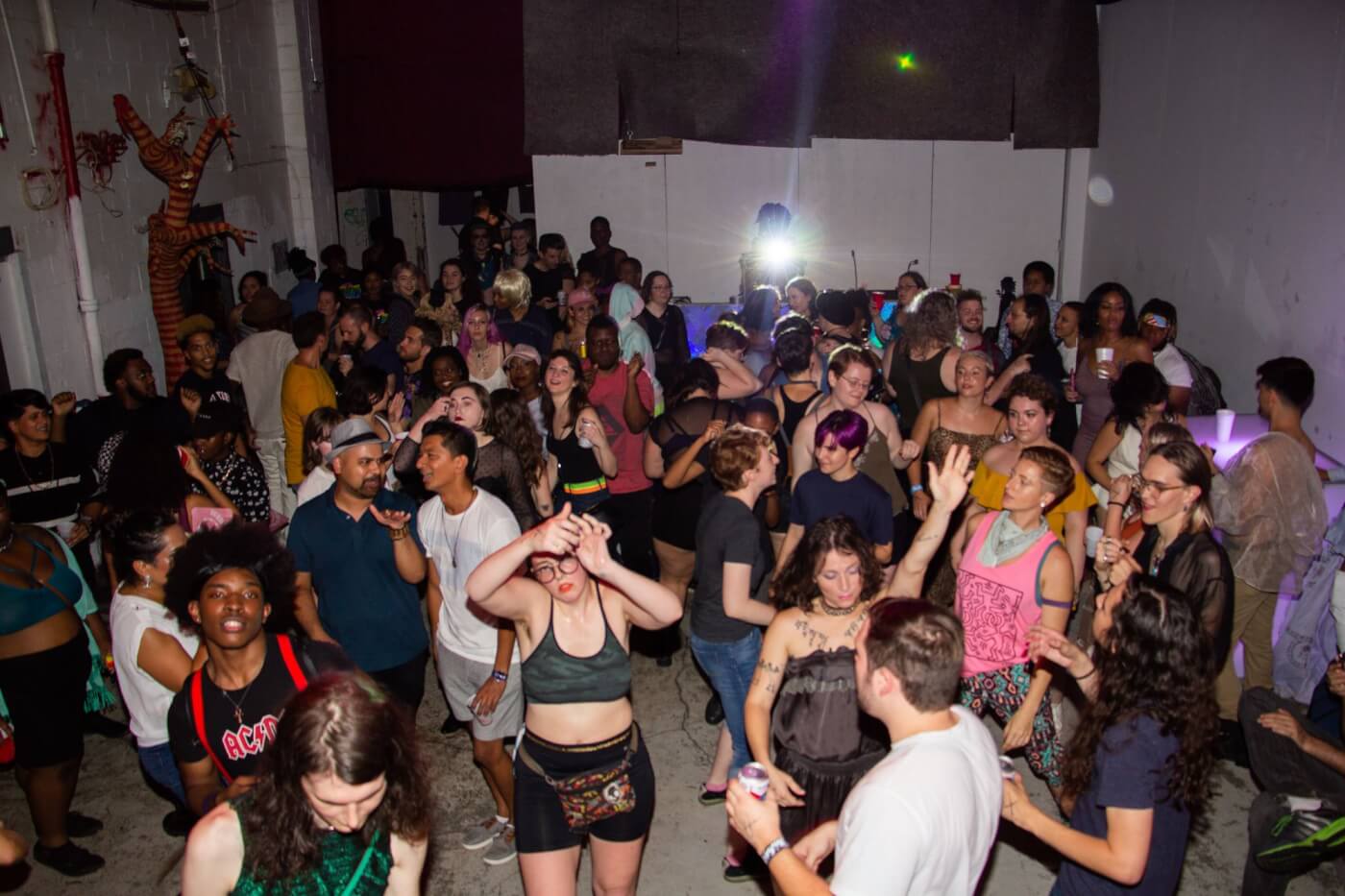 What are you most looking forward to?

Oh my god, I think what I’m looking forward to the most is seeing people walk the runway for the categories. Especially because there’s so many new people. Even amongst my black and brown friends, like a lot of them have always wanted to go to balls but haven’t known about them.

I’m excited about seeing everybody from so many different communities come together. Obviously, this is the ballroom scene, which is majority black and brown people, but then we also have like the club kids that are coming. We have the community organizers who are coming and will be tabling at the event. We have the drag scene that is also interwoven into all of that, so it’s just a really great mix of people and I think representative of how widespread and intersectional the ballroom scene really is.

What does being involved with a large-scale event like this, or with a company like Red Bull, mean for Southern Fried Queer Pride?

Well, I think for us, it’s really validating in a sense because a lot of the work that we do is intercommunity. It’s definitely the biggest event we’ve put together so far and I think the reach of the event is the largest we’ve ever had. But for us, it feels very full circle, especially since we’re going into the year fully organizing our festival that will happen next year. It’s just really affirming that we’re doing something right.

Tell me about Trans Power Fest.

Trans Power Fest came about just as a need to have spaces that are fully owned and operated by trans people featuring trans talent and trans community involvement because we don’t really have that here in Atlanta. We have like outreach groups and community groups but nothing that’s like fully trans operated. So we’re putting it on Saturday, November 17th, which is the weekend leading into Trans Day of Remembrance which is November 20th. It’s a full one-day festival starting off with workshops and skill shares and artist markets, a movie night, which then leads into a variety of shows, music, drag, comedy, and performance art. Every single person that’s performing, that’s organizing it, that’s putting on a workshop, is trans identifying. We wanted a space where the trans community can uplift ourselves and not have to tone ourselves down to assimilate ourselves to be more palatable for cis people.

When we announced that we received a lot of emails and questions from cis people just wondering why we decided to do something that was fully trans-oriented and trans centered. We made sure to mention that cisgender people will not take up too much space. We had a lot of conversations about what taking up space means for cis people. Like if you attend, don’t ask too many questions, and definitely don’t take up a lot of resources. It created a lot of dialogue and conversation which I think is healthy for cis people, especially if they’re working to be allies. It’s been fun so far. It’s been cool. 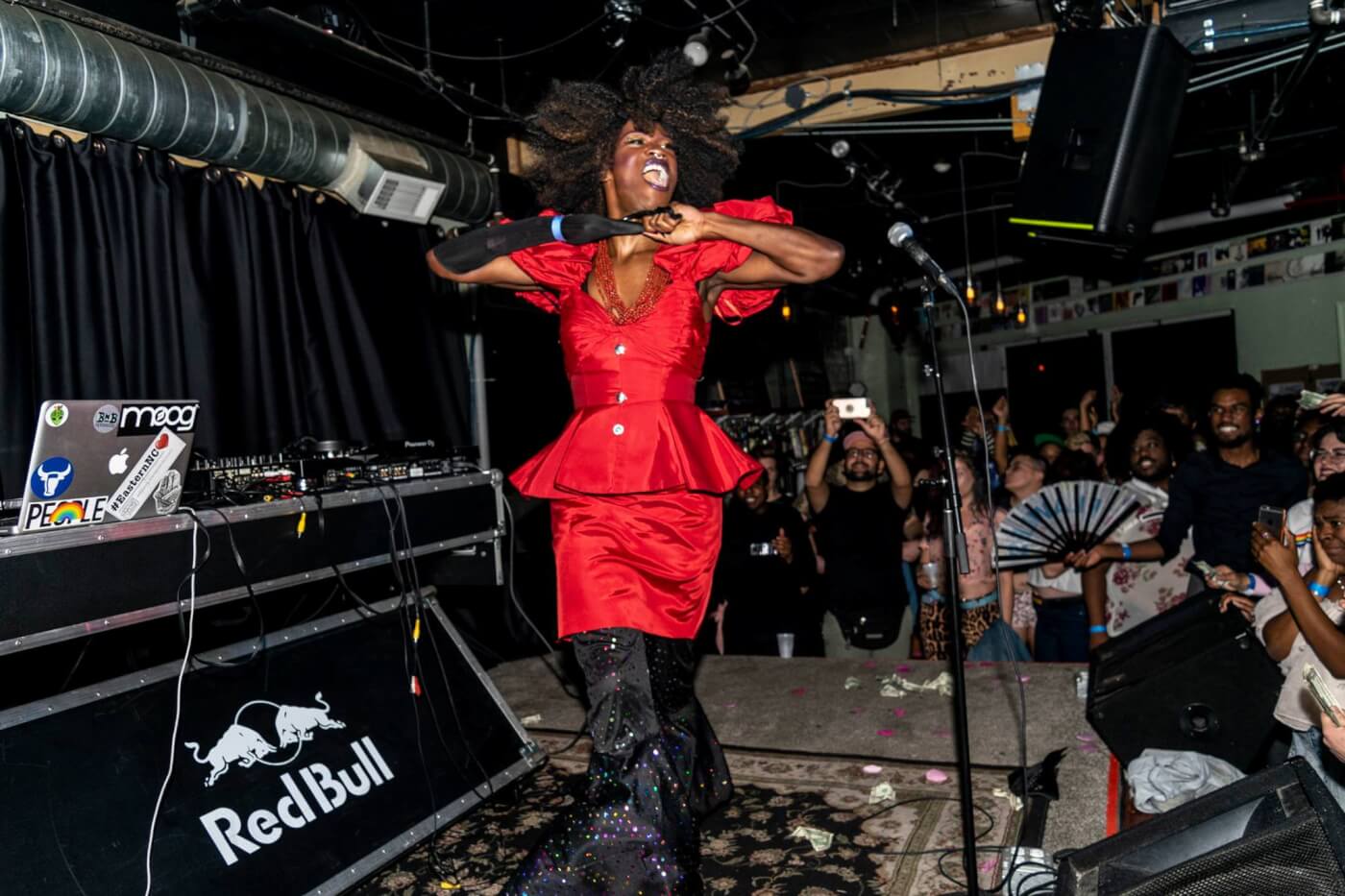 It’s funny that you ask that because a lot of people don’t and they kind of project a narrative so I really appreciate that. I think ideally, I want to say that Southern Fried Queer Pride is a grassroots organization that’s uplifting southern queer and trans voices. We’re gritty, we’re grassroots, we’re independent.