Six months before coming out, I had a burn out that forced me to spend a week at the hospital.

This scary event saved my life; the three months I had to take off to mentally recover and build a better work-life balance taught me to focus on my own needs and priorities. That space allowed me to think about myself and my desires, instead of trying to please everyone.

At 35, I pretty much had checked all the boxes: a successful international designer career, a husband, a kid, a big apartment. I forgot one thing in this plan: myself.

I was assigned female at birth, and I lived all my life seen by others as a woman. That day in March 2017, when I reached rock bottom, was the scariest and most hopeful day of my life. Coming out as a transgender person at 35 was a huge leap; a life or death kind of leap. That was the moment I finally gave myself a rebirth.

We talk a lot, in the queer community at least, about gaslighting. When someone makes you believe that what you witnessed and/or felt was not true, even though you are pretty sure you are right, until they insist so much that you start doubting what you really saw or felt. We rarely talk about our own gaslighting: I became a master in gaslighting myself, losing confidence and being less and less sure of anything.

In the misogynistic, binary society of France where I grew up, masculine-presenting people are praised and encouraged which builds their confidence. It is very common for feminine-presenting persons to talk themselves down, as they are used to not being seen as valuable. I knew I was uncomfortable with my body since age seven, but I never had the language to express what those feelings were. I felt a constant clumsiness in my own body; I avoided mirrors.

I remember watching La Cage aux Folles (literally “the cage of crazy women”), a farce by Jean Poiret. It was one of the first mainstream movies that featured drag queens. At the time, and even now, gay feminine people were identified by the slang “folles” — “crazy.” Transsexual and transgender persons were always pictured as a joke in movies, not empowered at all. This taught me that feeling different was something I should bury deep down, otherwise people would mock me.

On top of that, France has a very gendered culture and language. Every word is either masculine or feminine, and every adjective is conjugated according to the word’s gender: “the girl is short” — “la fille est petite”; “the boy is short” –“le garçon est petit.” There is no escape from the binary in France. Everyone in stores uses Madam or Sir to greet you. You are always expected to be on one side of that binary: woman, who learned how to receive unsolicited comments, or man, who felt entitled to invade someone else’s space. I’ve witnessed first hand how masculinity can be toxic, and make a space feel suddenly unsafe.

We teach women to not walk alone at night, wear “appropriate” clothes to not attract looks and comments. We are living in a world where being female-presenting means that you use half of your daily focus to make sure nobody is following you in the street, to check that your cleavage is not too revealing when you enter a meeting room, to close your legs tight when you sit on a subway car, to smile to the catcallers in case they get aggressive if you ignore them.

Living in this constant fear was exhausting and, in my case, even harder because the female presentation that was attracting those unsolicited disturbing sexual comments was already causing me so much distress. Late at night, I used to walk closer to women-presenting people to feel safe.

Going from victim to perpetrator

Even though I now identify as nonbinary and use they/them pronouns, I initially went through a hyper-masculine phase where I was using a very gendered vocabulary (like “bro,” “dude”…) and he/him pronouns. I think I felt the need to go into the “bro” culture to counterbalance the femininity I had to experience against my will for 35 years. However, I was playing a dangerous role by being part of the “boys club”: it feels great, and safe, to be at the top of the food chain but it also hurts, not only women but everyone in our society who is not a cisgender white man. By perpetuating the fact that male-presenting persons are the most important individuals, and putting masculine terms as the neutral like “dude” and “hey guys!” even when the group is not only “guys,” we continue to feed the binary gender war. The male privilege means higher salaries, more speaking time in meetings, or overall more credibility to the point that we can literally get away with murder. This won’t be challenged enough until we actually make the neutral a real neutral between women and men.

I’ve been aware that exploring my gender made me cross the line of toxic masculinity. It was time to stop being a jerk and actually turn my newly earned privilege into a positive by assessing my contribution to the unfair society of which I was once a victim.

I understand how cisgender men have a hard time believing that it’s real and how it affects someone’s mental health and growth. I sometimes even forget that it exists, and I lived for 35 years as a woman.

By being seen as a white masculine person, I gain some privileges. What I say is ten times more potent than when I was read as a woman. I bring up the same feminist and inclusive conversations with the difference that now people listen to me. I receive way less noise that tries to shut me down, which allows me to believe in my own thoughts and feelings. I need less effort to convince others of my ideas and plans, because I seem more trustworthy as a man.

Why do I feel more confident now? It’s a mix of finally being my true self and also because men are overall more encouraged. Being supported fuels my self-esteem which then allows myself to take more risks — the secret to growing more confidence. Being seen, heard, and believed was an incredible boost to my growth. 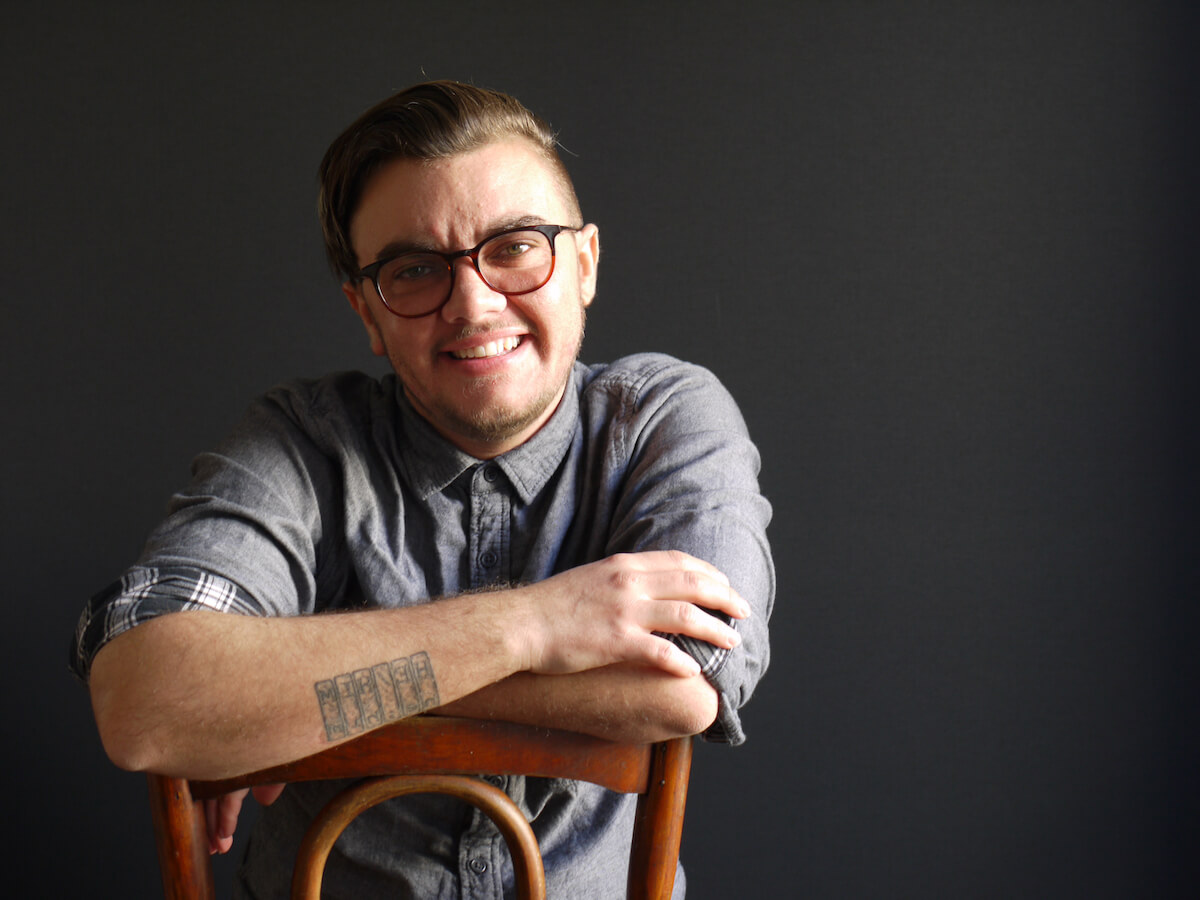 Finding my purpose in life

I still had to fight trans issues like legally changing my name to Max. I had to update it both in France and in the US, so I lived for a very long time with my very feminine birth name on my credit card. One day, I paid for an order at a coffee shop using that card. When my tea was ready, the barista shouted out my birth name which does not match my masculine presentation at all. In this profoundly traumatic experience, I was not only crushed by a sense of gender dysphoria but actually put at a real risk of danger as everyone in the cafe became aware that I am transgender. I wanted to crawl inside my skin; everything instantly seemed too hard and not worth the fight. Nobody will ever see me as I see myself. I wanted to disappear. I wanted to die.

I picked up my tea, grumbled that my name was actually Max, and I went to sit. I stayed there, staring at my tea, and ultimately the cashier came to me to apologize for not asking for my name when she took the order. Her name was Destiny. You can’t make that up.

I realized the fault was not really hers. Maybe yes, the coffee place should have had a process where they ask everyone’s name instead of using the name on the credit card, but also, my brain started to function again. I got out of my panic moment: the app the cafe used to collect payment could have a separate field to input a name distinct from the name written on the credit card. This is a simple fix that could have saved me this traumatic experience as well as the fear of direct violence for being outed as transgender in a public space.

I realized I could be the change and improve gender inclusion issues using my unique perspective in the society and the Design Thinking Workshops methodology I was practicing for years as a designer in startups. I saw how I could leverage the user research sessions and ideation workshops to focus on inclusion problems instead of business problems. This call was impossible not to listen to: I felt this urge to use my superpowers and my unique perspective to open people’s minds on how risky a gendered society can be.

I embraced that new power by using my voice to reach even more people as well as learning when to stop talking to leave space for underrepresented voices. I decided to put my successful design company on hold and partner with Jay Bendett, a nonbinary person with experience in early childhood education and a Master’s degree in Gender Politics & Education. Together we became Argo, a collective with an inventive way to create approachable inclusivity programs that solve real problems and drive actual outcomes for companies that want to open their market to a more diverse crowd — or just want to do the right thing. For many years I craved a project like this, where I could use all my skills and passion.

I train teams to be more gender-inclusive by figuring out solutions in the products and services they release. I also designed our Inclusion Action Cards with Jay: these are 18 actionable tips for teams to foster belonging in their products and workplace. This side project has been a huge success. Someone shared that using some of Argo’s tips made a university interested in placing a transgender student on their staff.  We know how hard it is to find a first job, especially as an underrepresented person. Even just one transgender person having an easier life means Argo is a success for me. 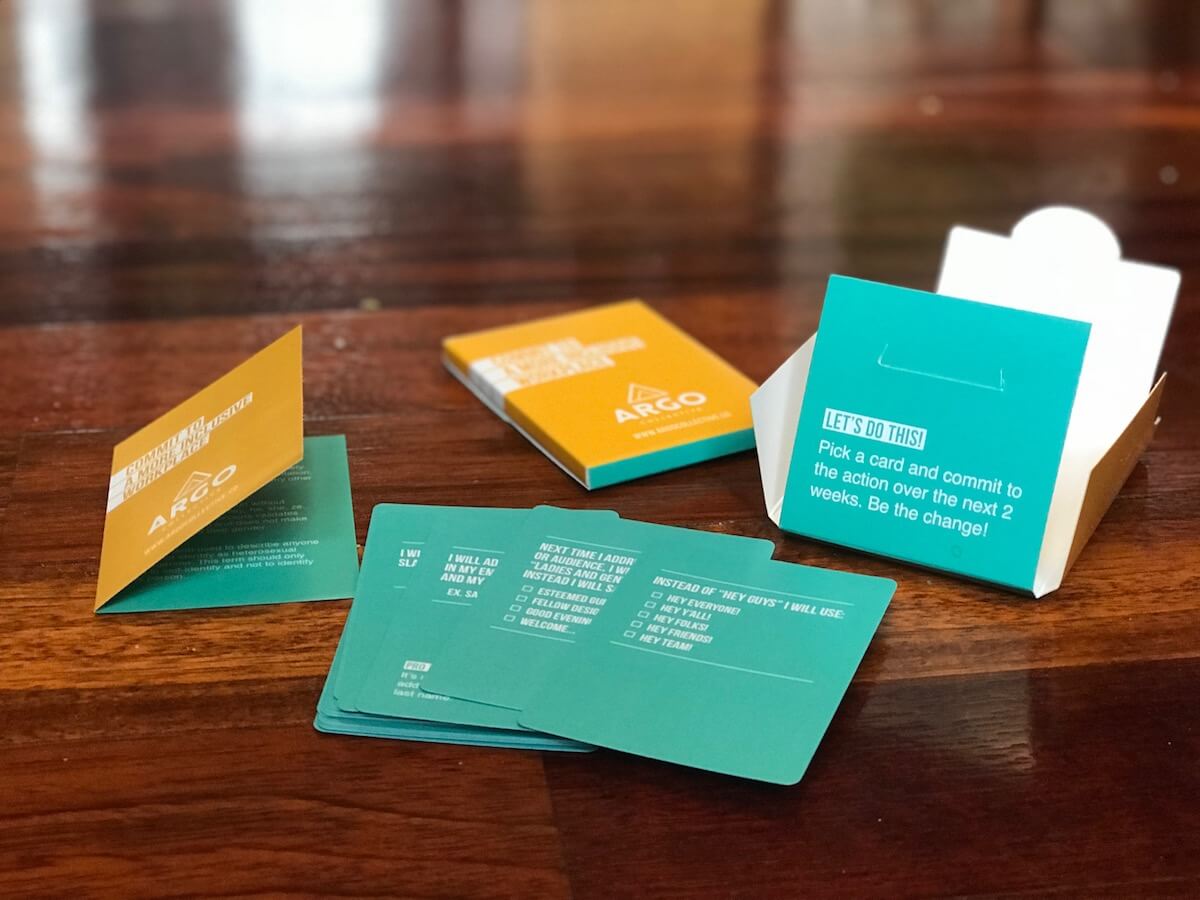 The excitement of this new adventure brings me back to the infinite energy I had in high school for the arts, when I was creating projects all the time, day and night. I remember this goofy little guy I used to draw with short hair, jeans, and sneakers. His name was Max. I keep wondering how my life would have unfolded if a transgender person was actively helping me figuring out my own gender at the time. I want to be that person for a young Max. 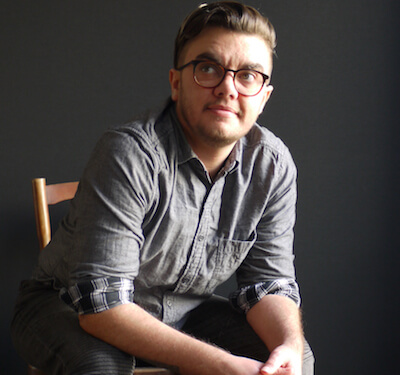 Max Masure is the co-founder and COO of Argo Collective.
IN CASE YOU MISSED IT

The Captain of the Swim Team Is Gay

Three Queer Women of Color On Coming Up and Letting Go