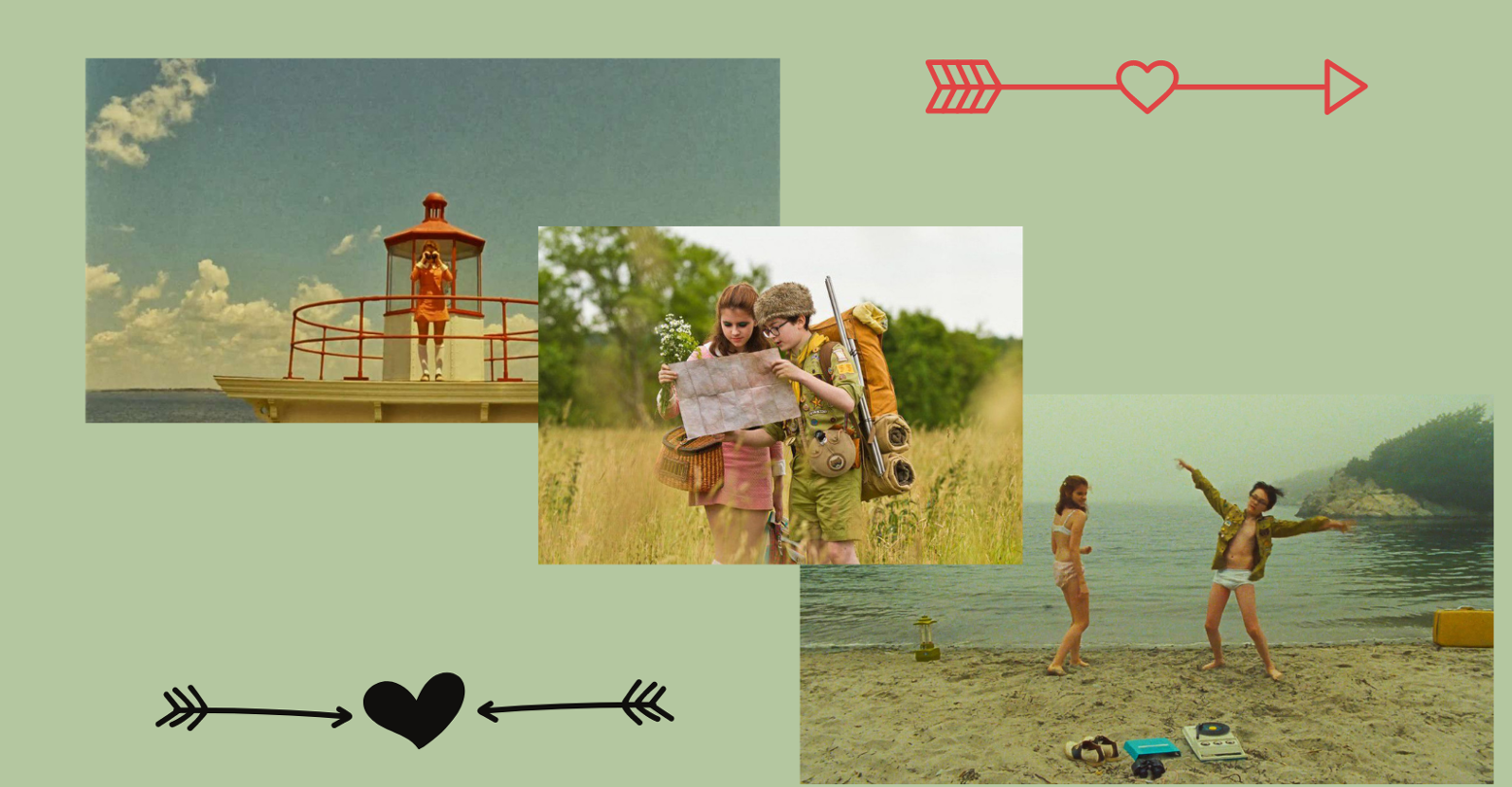 It’s Valentine’s Day, which means it’s time to cozy up with someone special (or your own yearning) and watch some movies about love, romance, and all its many permutations. By now, thankfully, there’s no shortage of queer love stories on film (personally, I’m planning on  showing my partner Titane for the first time.) But despite this plethora of films, there are very few films about transgender relationships outside of the indie film circuit. Some mainstream movies, however, unintentionally fall into the realm of trans cinema. My favorite among these is Wes Anderson’s 2012 masterwork Moonrise Kingdom.

Set in 1965, the film follows Sam and Suzy, two 12-year-olds who fall in love and run away from their rural New England town to be together. Sam is a small and stout romantic who embodies a model of the American frontiersman, enjoys “painting nudes,” and wears a brooch on his lapel because, while it’s supposed to only be worn by women, he “doesn’t give a damn.” Suzy is a tall femme who loves music, is prone to emotional outbursts, and gets lost in storybooks as a way to avoid her reality. She also feels a kinship with ravens. With this rough sketch, it’s easy to proclaim “Oh. They’re T4T.”

After all, the quintessential straight T4T stereotype is a tall, elegant woman paired off with a short and eager man who would die for her if asked. Suzy and Sam certainly fall under this categorization. However, the self-assured woman / lovesick man dynamic is hardly a trans-specific experience. Many other films, such as Double Indemnity, 10 Things I Hate About You, or another favorite of mine, Submarine, engage with this pattern of romance. It’s also a staple dynamic of film noir. What makes a trans reading of Moonrise Kingdom possible, however, is that its “queerness” runs deeper than just this surface observation.

There is a social aspect of Moonrise Kingdom that allows for a trans reading. Both Sam and Suzy struggle primarily in how they relate to their peers. Sam is bullied by his fellow khaki scouts and the boys at his orphanage for being small and weak, and for his personality. Likewise, Suzy has a tendency to start fights with the girls in her class. The two are not only isolated because of their ostracization from their peers but society writ large. Suzy also fights with her parents on account of her emotional problems and is comfortable leaving them in part because she finds a booklet on “Dealing With an Emotional Unwell Child.” Max, meanwhile, is an orphan with a tenuous connection with his foster parents.

What makes a trans reading of Moonrise Kingdom possible is that its “queerness” runs deeper than just this surface observation.

The threat of institutionalization is constantly in the background of the film and poses a direct threat to Sam if he is caught. Suzy is also at risk, albeit far more removed on account of still having parents to go home to. Both are isolated and only have each to rely on, and that is a key aspect of why T4T romances often form. In their essay on the film for the collection Queer as Camp, Kerry Mallan and Roderick McGillis note both the film’s focus on queer temporality and spatial orientation. Sam and Suzy do not fit in with their middle-class surroundings, but thrive in the wilderness where they can chart their own path and make their own rules on their own terms. The titular ‘moonrise kingdom’ in which they set up camp is stationed on a tidal inlet doomed to be washed away by an incoming flood. The territory in which they find themselves is caught in its own transitory period.

Likewise, both are in the beginning stages of puberty, and overperform their genders out of a fear of inadequacy, and out of fear of what the future may hold. At the risk of infantilizing the trans experience, it resembles many of our own second puberties; nervously experimenting with gender to see which one fits, and finding someone else to act as a reference point for the ways in which both have changed. Anderson’s deadpan style of dialogue works wonders in the script to show a contrast between children speaking practically about topics like marriage, while the adults refuse to acknowledge their own failures. There is explicit boundary confusion and it helps highlight the earnestness with which Sam and Suzy love each other.

After all, the quintessential straight T4T stereotype is a tall, elegant woman paired off with a short and eager man who would die for her if asked.

Perhaps that’s the emotional core that best supports the trans reading of Moonrise Kingdom. Sam and Suzy are honest with each other and refuse to keep secrets. Sam discloses that he may wet the bed, and separately Suzy tells Sam that she wishes she was an orphan like him. Rather than let the resentment build, he responds with one of my favorite romantic lines “I love you, but you don’t know what you’re talking about.”

In that phrase is the greatest lesson we can take from the film this Valentine’s Day. To love someone, we have to be honest with them; about our desires, our bodies, and our limits. We must be earnest and kind, and to accept our partners for who they are, as well as who they intend to be.♦