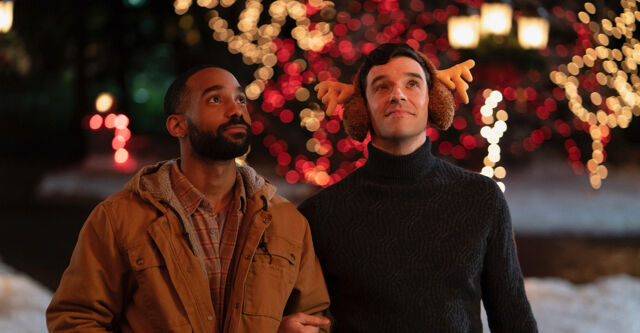 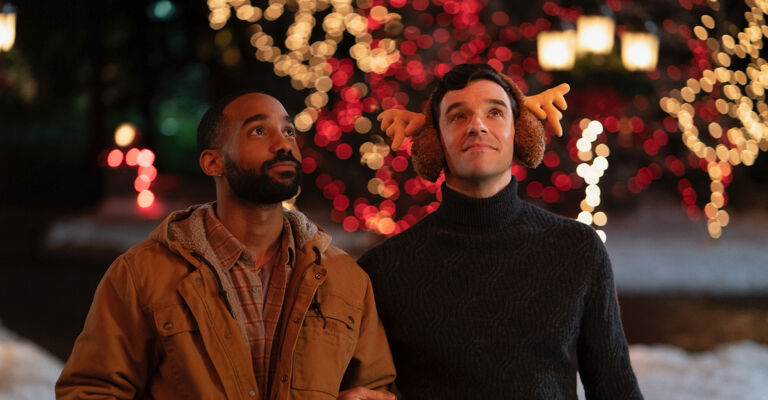 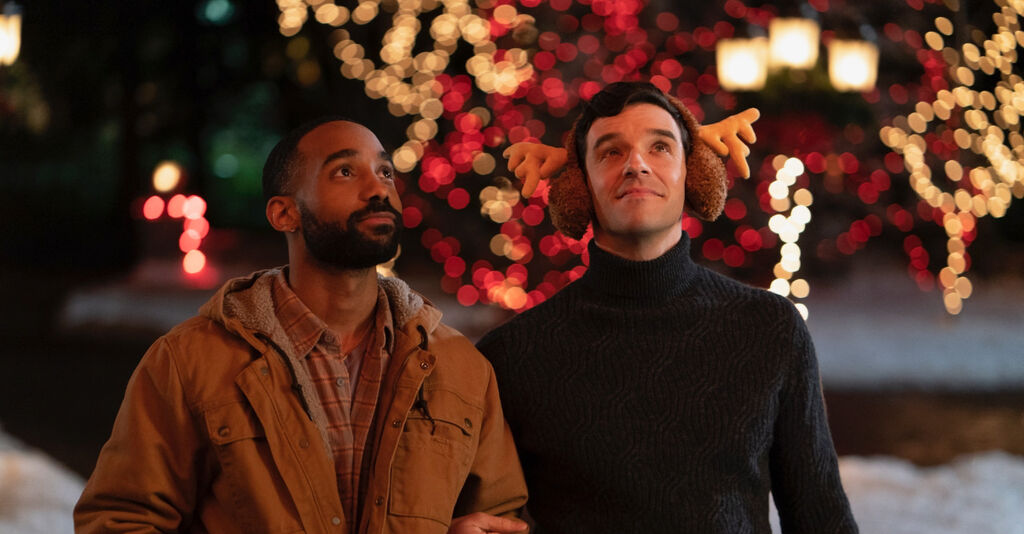 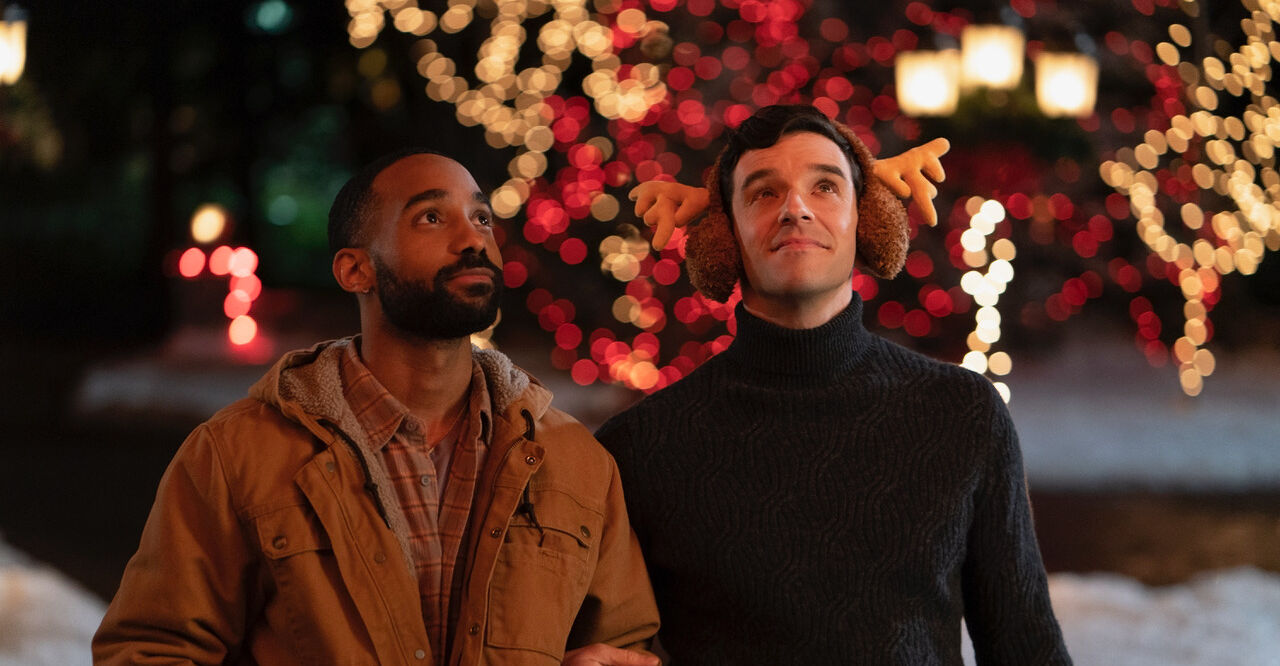 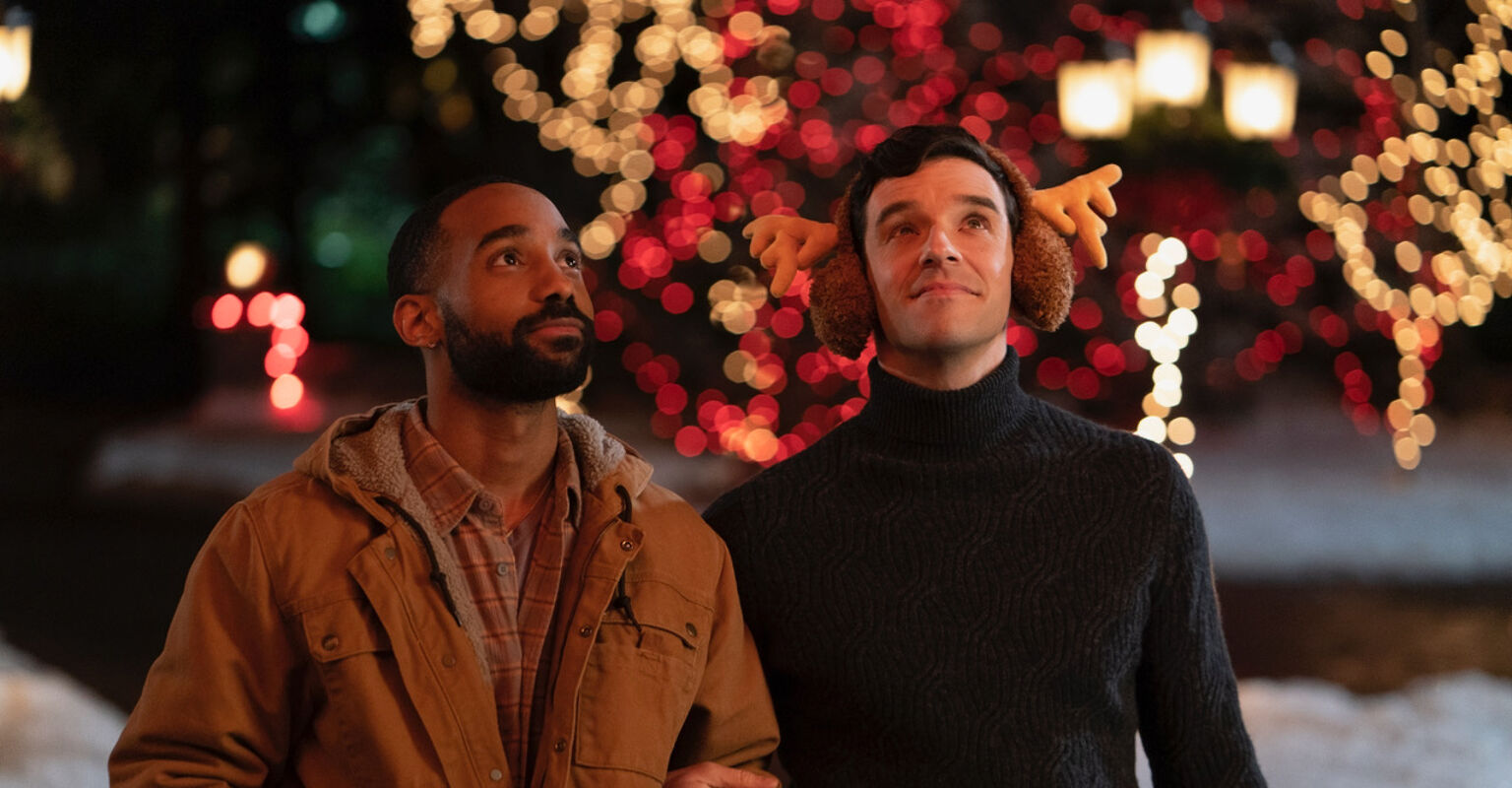 Beginning with Girls Aloud’s timeless Christmas classic “Not Tonight Santa” accompanying a photoshoot featuring several shirtless Santas with “all the abs” makes it abundantly clear that Single All the Way, Netflix’s first-ever gay Christmas rom-com, knows its audience and is fully intent on giving them everything they want.

The mastermind behind this photoshoot is Peter, played here by Michael Urie (Ugly Betty, Swan Song), an advertising producer living and working in LA. When he’s not snowed under by an unfulfilling workload he enjoys tending to his many house plants, which of course all have their own names, and updating his plant Instagram account – just as any good plant dad should. He lives with his best friend Nick, portrayed by newcomer Philemon Chambers, who works as a handyman for hire who has also penned a best-selling kids book about his gorgeous pet dog Emmett – talk about dreamy, right!?

When audiences first meet Peter he’s in his longest-lasting relationship to date and looking forward to bringing his new boyfriend home to introduce to his family, finally alleviating the pressure of being single at Christmas. However, the day before he’s set to go home he finds himself single once more so decides to make a plan that sees Nick pose as his boyfriend to avoid a Christmas full of scrutiny over why he’s still not in a relationship. Little does he know that his mother, Carole (Kathy Najimy) – or “Christmas Carole” for the month of December – has set him up on a blind date with her spin class instructor, James (Luke Macfarlane), therefore halting his and Nick’s plan before they’ve even had a chance to announce their fabricated good news.

What’s most refreshing about Single All the Way is its ability to communicate a queer narrative beyond a coming-out story.

Moving past this pretend-partner plot point is one of the best decisions the film makes. This is a tired trope in the rom-com genre and whilst the story that the film tells in its place is still quite clichéd and predictable it’s far more enjoyable than the monotony that the original premise may have brought with it.

What’s most refreshing about Single All the Way is its ability to communicate a queer narrative beyond a coming-out story. The importance of these kinds of stories however should not be understated. They’re an essential part of queer existence, and films such as Love, Simon and Happiest Season have allowed leading gay characters the chance to live out these moments, subsequently broadening queer representation in mainstream cinema. But when this is the only kind of narrative associated with queer characters in this genre, it becomes a problem. Single All the Way is a rare example of a film that lets its leading gay characters exist without hiding their sexualities or having to overcome familial, or otherwise located, homophobia. Queer people deserve to see themselves in fluffy, trauma-free Christmas movies too and Single All the Way delivers this in spades.

Other than the liberating narrative Single All the Way’s best quality is without a doubt its crowd-pleasing cast. Those who enjoyed Urie’s fantastic turn as Marc in Ugly Betty will be immediately drawn to his involvement here and he leads the film well conveying a lot of relatability and a pleasant screen presence. However, it’s newcomer Chambers who’ll likely steal the show for most. His charisma will instantly endear audiences to him and his story and this likeability will keep viewers engaged throughout. The subsequent chemistry between Urie and Chambers is good too, it could be more convincing but there’s enough of a spark for audiences to root for them and the happy ending that all good Christmas rom-coms should have.

Of course, going home for Christmas allows Peter to be reunited with his family and once again catering to its very specific audience, Single All the Way delivers a holy trinity of queer favourites in supporting roles. The aforementioned Kathy Najimy plays Peter’s mother, a supportive parent whose efforts to understand all things LGBTQ+ are equal parts embarrassing and endearing, yet it’s her obsession with “Live, Laugh, Love” style signs that feels like the most accurate manifestation of mum-energy. Fans of Schitt’s Creek will be thrilled to see Jennifer Robertson amongst the cast too, playing Peter’s sister, Lisa. Her passive-aggressive comments about long-standing Christmas family traditions and her constant chatter makes for another amusing extension of the family. Although, unsurprisingly it’s Jennifer Coolidge’s hilarious turn as Aunt Sandy that produces the most comedy. If it’s not her side-splitting, scene-stealing entrance it’s her diva-like direction of a local nativity that will keep viewers entertained. In a brilliant piece of self-aware dialogue Sandy exlcaims that “They’re [the gays] always obsessed with me” – and it’s true, her hold over the homosexuals has never been stronger and Single All the Way takes full advantage of this.

Admittedly Single All the Way is a formulaic as they come, but with such an enthusiastic and entertaining cast, a festively fabulous soundtrack which includes Girls Aloud, Whitney Houston AND our lord and saviour Britney Spears, as well as a joyfully progressive, yet appropriately light narrative the film ultimately comes together to offer a quintessentially queer and super cute Christmassey cracker with a surprising sprinkling of sentiment.♦