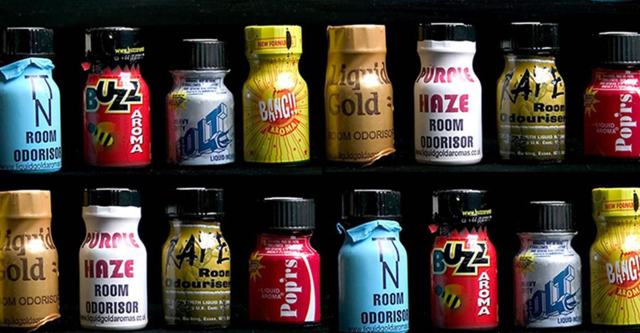 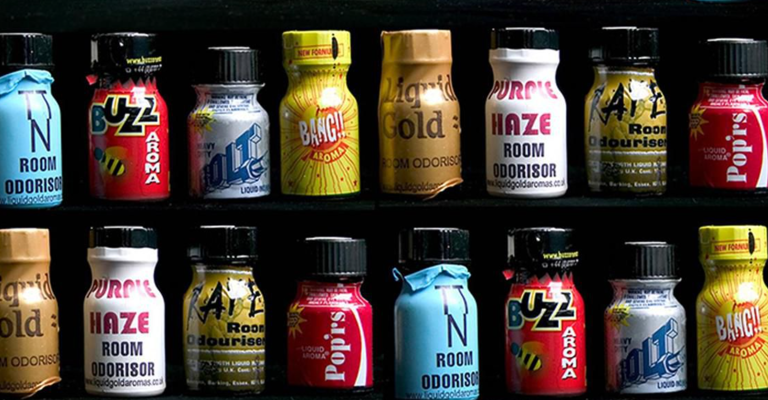 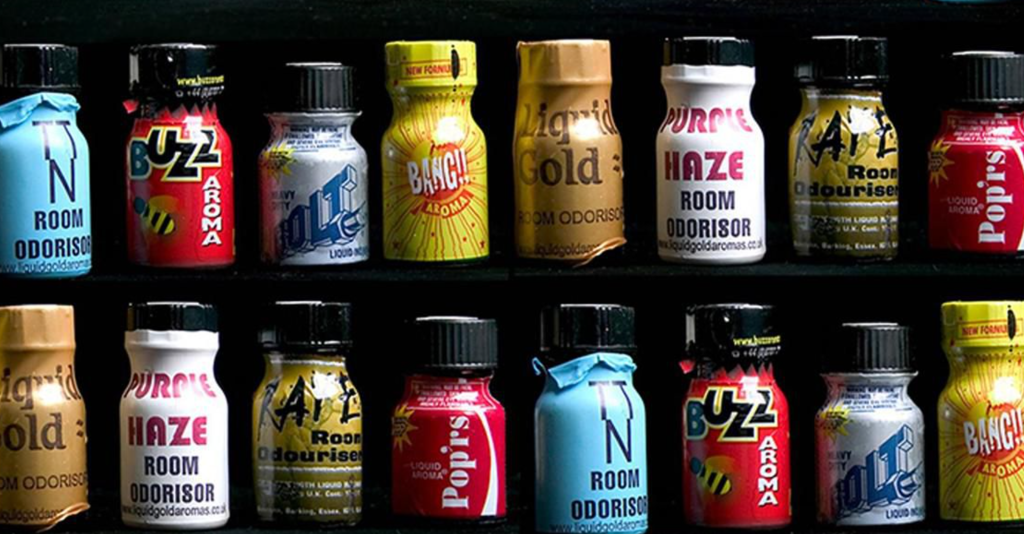 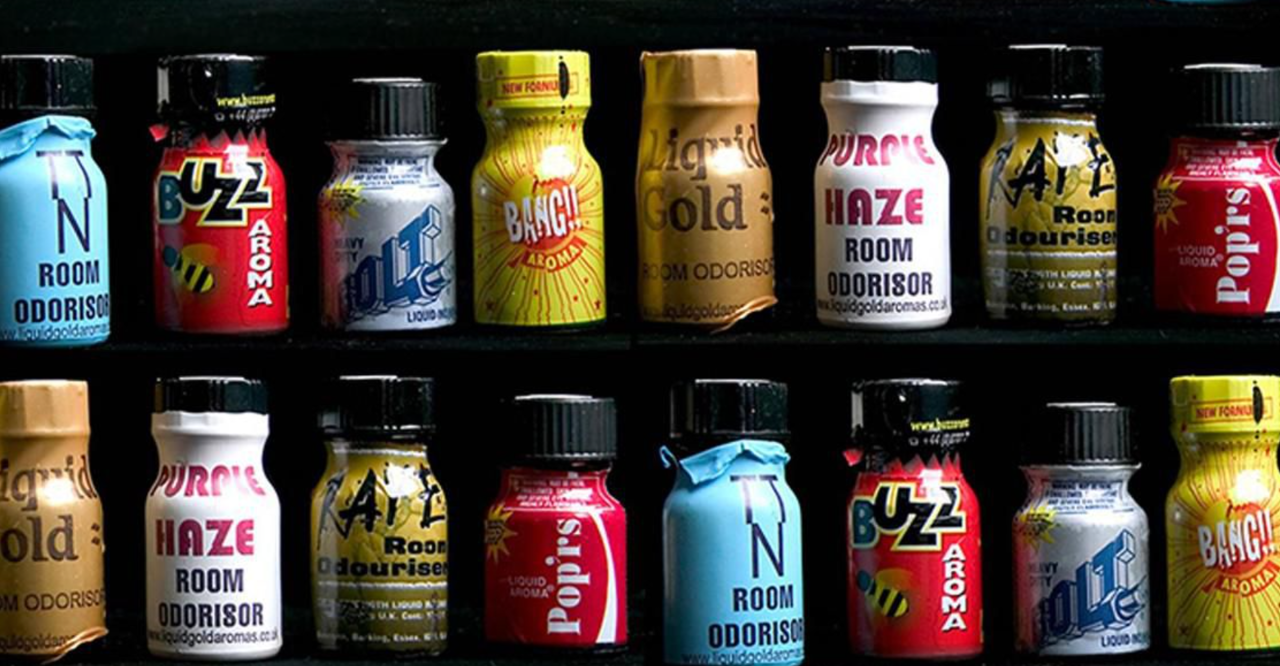 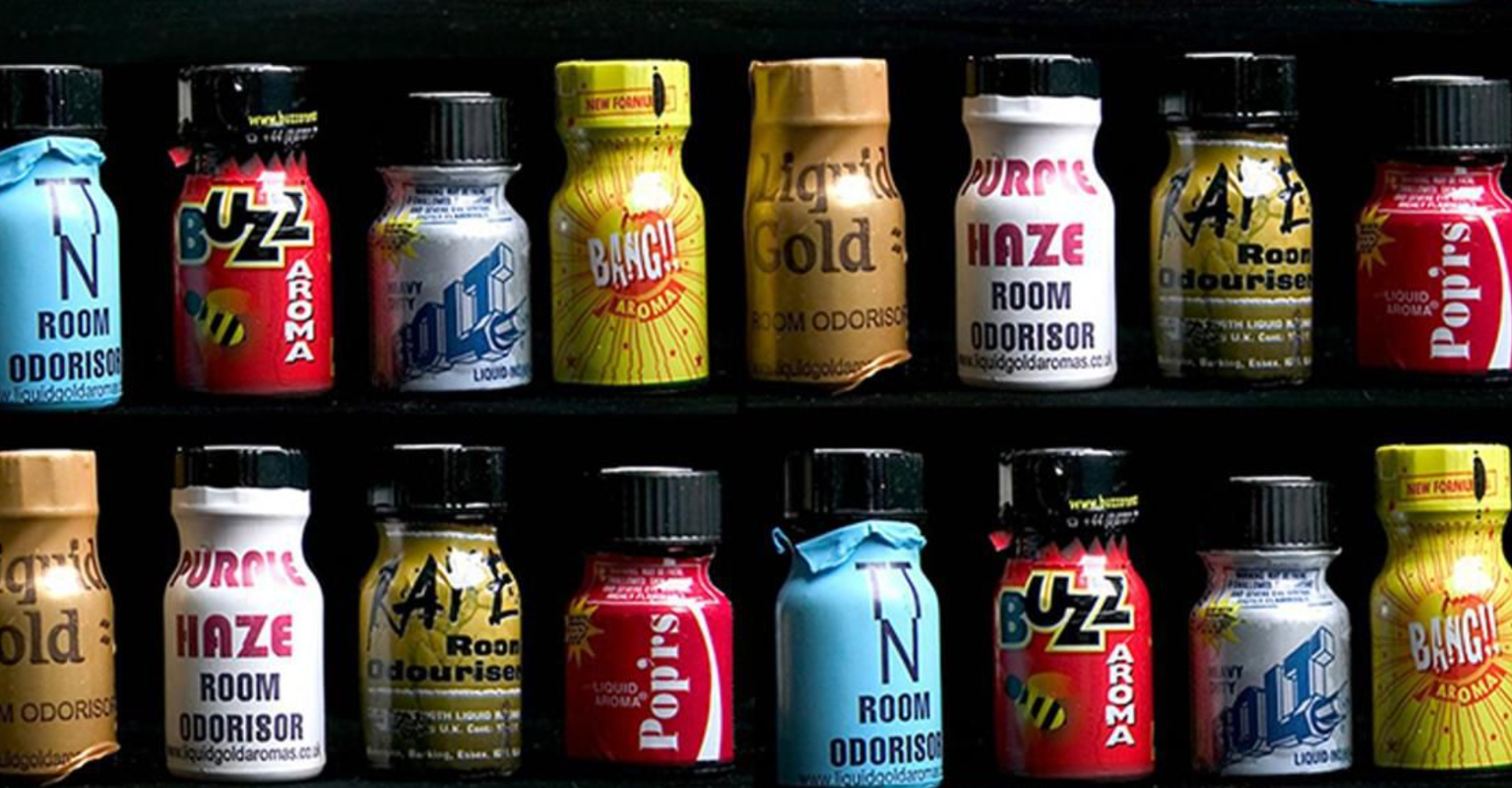 I’ll always remember being on the phone with a friend, when they mentioned they’d be doing poppers at the club that night.

Poppers, like ‘em or not, are a quintessential piece of queer culture, especially for gay men. That red and yellow bottle, lightning bolt and all, is guaranteed to go down in queer history.

But where do poppers actually come from? For the amount that they’re inhaled in gay bars and bedrooms, you’d think more folks would be in the know about their origins — but they’re not. The long and complicated history of the drug was recently uncovered through an investigation by BuzzFeed News, and the vast majority of America’s poppers can be traced back to one factory in Pennsylvania.

Poppers, like ‘em or not, are a quintessential piece of queer culture, especially for gay men.

Let’s start with the facts. “Poppers” is the slang term for bottled amyl nitrites, a chemical compound classified as an inhalant. They were first sold as a treatment for angina, coming in individual glass capsules that had to be crushed or popped open, hence the nickname. But when they fell out of favor as an angina treatment in the 1960s, marketers realized consumers were already snapping them up for another reason.

Two gay men spearheaded the poppers industry at this time: Clifford Hassing, who branded his poppers Locker Room, and W. Jay Freezer, whose far more popular brand, Rush, became a household name. Well, if your household’s gay, that is.

At this point, you might be wondering: how the hell is this legal? Well, it isn’t, really. Amyl nitrites were classified by the FDA as a prescription drug, but Freezer got around that with a marketing loophole. He sold Rush as “liquid incense.” Nothing illegal about that, is there? To this day, poppers are still widely available in plain sight because they’re labeled as VCR cleaner, nail polish remover, you name it — anything besides what people are actually buying them for.

Jay Freezer, whose far more popular brand, Rush, became a household name. Well, if your household’s gay, that is.

Freezer had struck gold with Rush, and he kept riding that high until his death from AIDS-related complications in 1985. From there, the brand was acquired by Joe Miller, an Indiana businessman who kept the poppers flowing until 2010. That year, for unknown reasons (some suspect that the feds were closing in on him), Miller took his own life, dying from “asphyxia due to nitrogen inhalation,” per the coroner’s office. In layman’s terms, he took his own poppers until he died.

Yeah, friendly reminder: poppers aren’t a joke. They’re by no means the most dangerous drug on the market, but as Miller’s death proves, there is certainly a risk involved with inhaling them. The FDA released a statement on poppers just this June, advising “consumers not to purchase or use nitrite ‘poppers’ because these products can result in serious adverse health effects, including death, when ingested or inhaled.”

How the hell is this legal? Well, it isn’t, really. Amyl nitrites were classified by the FDA as a prescription drug, but Freezer got around that with a marketing loophole.

Yet the government largely turns the other cheek when it comes to poppers, so long as they’re never explicitly advertised and maintain a limited market. Just another example of America’s bizarre relationship with drugs, the war on which was never really about substances to begin with.

So, who’s running the poppers industry these days? Did you guess a 65-year-old straight man with a wife and two kids living in suburban Pennsylvania? Probably not, but if you did, you’re right on the money.

Everett Farr got into the poppers business in the ‘90s, when an associate approached him about bottling nitrites in the back of Farr’s autobody shop. As he became more familiar with the adult industry, Farr eventually expanded the business into the plant he now runs.

He’d never planned to be bottling “liquids” as a career, Farr told BuzzFeed, but the money was good enough he saw no reason to stop. It’s now been 30 years, and Farr’s business is still going strong.

“I decided if I’m going to sell my soul to the devil, I might as well make money doing it,” Farr said.

Farr licensed the Rush brand in the ‘90s from Miller, and he continues to use it, but he’s not the only one. Pac-West Distributing, the other biggest player in the modern poppers market, also uses the Rush brand, and the two companies’ products are near impossible to tell apart. But it doesn’t really matter: branding aside, they make the exact same thing.

“I decided if I’m going to sell my soul to the devil, I might as well make money doing it.”

“The one thing that everybody has to realize in the end, and I hate to break the news to them,” said Farr, “but every single bottle is exactly the same thing. And it’s been that way since time and eternity.”

Farr said it costs about $1 to make each 1-ounce bottle, which are then sold to distributors for $4.50 each. Next, they’re sold to stores for about $6, which is marked up to the approximately $20 consumers pay per bottle. There are no concrete figures, but Farr estimates that it’s a $40 million industry, of which he controls 75% of the market.

And Farr isn’t concerned with any moral implications of his business. He sees his industry as a net positive for the world: “Without this product, a multitude of gay men cannot have gay sex. Bottom line,” he said. “I’m telling you from the bottom of my heart. If it was hurting people, I wouldn’t be in it.”

So there you have it. The answer to the age-old question, “where do poppers come from?” Short answer: a dude in Pennsylvania. Long answer: an epic saga beginning with an angina cure.

It’s a risky business for Farr — though he sells his products as nail polish remover, it’s still a legal nightmare waiting to happen. But no one’s stopped him yet, and come what may, Farr is already a legend in my book.