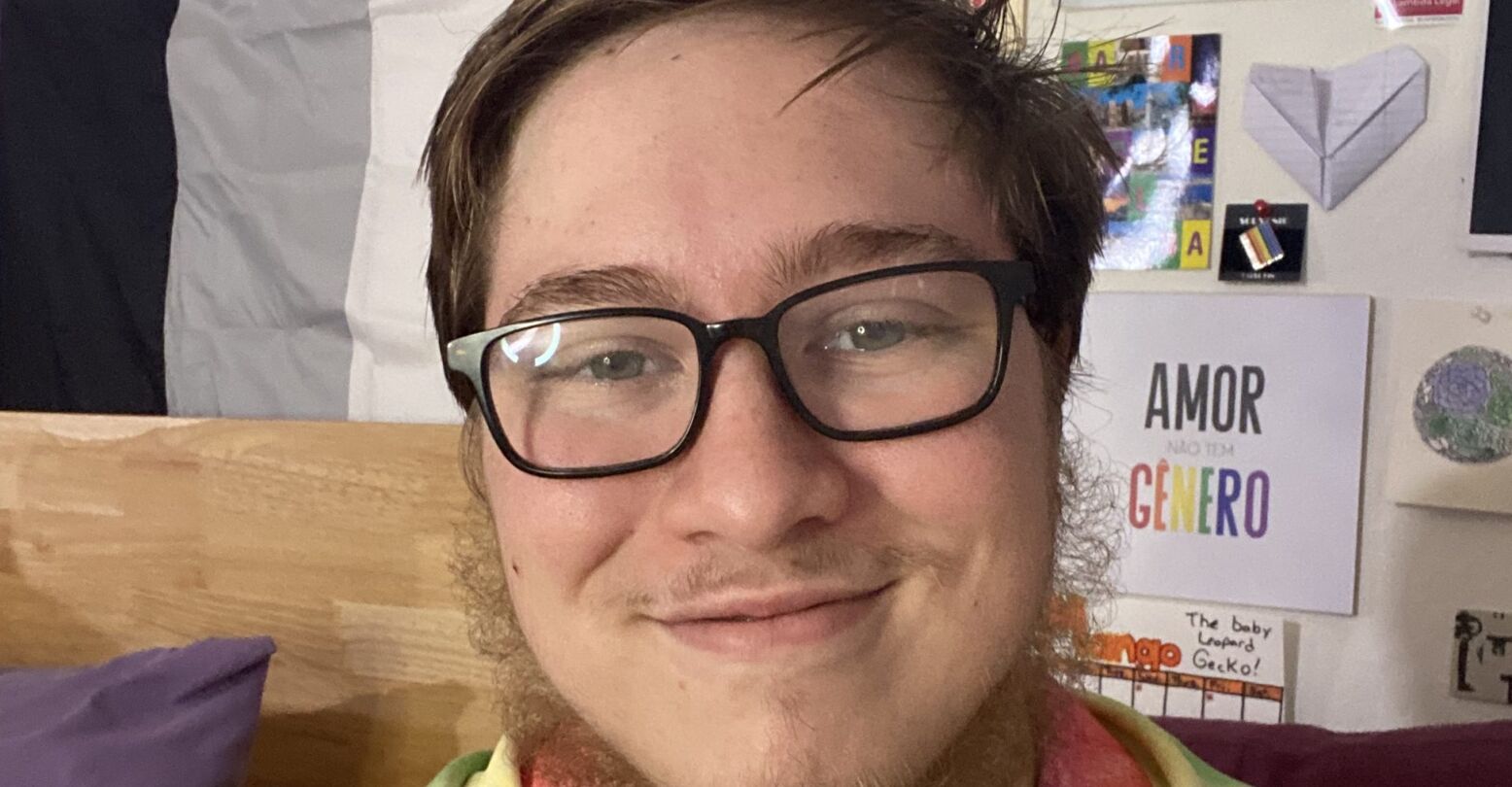 Andrew Adams made history as a teenager when he sued his Florida school board for keeping him from using the men’s bathroom, marking America’s first trial surrounding trans students’ equal access to bathrooms. Now, he’s a rising third-year student at the University of Central Florida in Orlando studying psychology — when he’s not writing books and giving TED Talks, that is. INTO sat down with Adams to dish on his definition of activism, his ever-growing family of lizards, and how Bo Burnham became the soundtrack to his apartment.

INTO: First off, I just want to talk a little bit about your identity as an activist. What does it mean to you to be an activist?

ANDREW ADAMS: I definitely think that more in recent years than anything, especially with the pandemic, my idea of how I’m an activist and what it means to be an activist has changed a lot. I definitely would have said something along the lines of being visible for those who can’t be, and going out there and using my voice for people who don’t have a voice. And yeah, I still agree with that.

But also, I think that a lot about being an activist nowadays is looking at my internal biases, and making sure that my house is in order before I go out there a little bit. And so what I’m doing more recently is a lot of reading and a lot of learning and educating myself on issues that I am not in the communities of, so that not only can I be the best version of myself, but I can be the best best activist that I can be. Because everything’s connected, you know? So the queer issues that I usually advocate for are also issues for people of color, and also issues for disabled people. Intersectionality. We’re all kind of connected, and we all have intersections in these communities. So it’s, I think, less appropriate nowadays to only focus on one issue when we’re all connected and all the issues are connected. And so that’s what I’ve been doing more recently. But still, of course, I’m a trans person, and advocating for trans people will always be my top priority as a trans person. But now, I’m trying to do that in the best way.

INTO: Gotcha. And you just put out a book, right? “Andrew’s Guide to Activism”?

ADAMS: Yeah, I wrote an e-book about how to get into activism. It’s kind of just a brief summary of the different types of activism that I have observed over my years in activism, especially things like social media activism, and things that people don’t see as activism that really are, like self-care and social media. A lot of people like to write those off as slacktivism, or fake, but that’s not true at all, because sometimes you only have a couple minutes and you want to make a change. So yeah, I put out a book about activism to help people who wanted to get involved.

INTO: Awesome. So, you see self-care as a form of activism — what would you say are your top self-care tips or things that you can do to take care of yourself?

ADAMS: I would say, first and foremost, scheduling time for yourself. I find it very easy to overschedule myself, I overschedule myself a lot. And I need to stop doing that. I’ve been trying to make sure that every week I have a day off, make sure that in between meetings, I have at least 15 minutes to decompress, and to take my interview face off and put on a different interview face, and to take care of myself in between meetings. So that’s my favorite of them.

Also, making your space more accessible for you, regardless of what other people would do. I have ADHD; there’s this concept called “ADHD doom boxes.” People with ADHD have a habit of just putting a box somewhere and putting all the stuff that they don’t know where to put in the box. And that works for me. It doesn’t work for a lot of people, but it works for me. And so I do that. Using things that work for you — even if they don’t work for a lot of people — figuring out what works for you and then using it is a great way to include self care aspects in a lot of the daily life stuff.

INTO: Moving a little bit from activism to your personal life — I hear you have a pet lizard.

INTO: Amazing. What are their names?

ADAMS: We’ve got Kiwi, the bearded dragon; Gumbo, the blue-tongued skink; Mochi, the sandfish skink; and Cookie, the leopard gecko.

INTO: Was there any rationale behind the naming?

ADAMS: We actually adopted Kiwi from Craigslist. So a little girl named him and then we stuck with it. Same with Cookie, someone else named Cookie. And then we decided to run with the theme, so we named Gumbo and Mochi after foods as well.

INTO: Love that! So if you were to get a fifth lizard, what would the number one name be at this point?

INTO: You like the name Chimchar, so are you also a Pokemon fan?

INTO: You are on point with the themes.

ADAMS: I had a lot of free time in quarantine to think about all of the animals I want.

INTO: I also wanted to ask, what kind of music are you into?

ADAMS: A lot of things. When I was growing up, my father was a big fan of ska. And so ska always has a soft spot in my heart, unfortunately, or not. But also I enjoy a lot of — my partner likes more rap stuff, and honestly, I listen to a lot.

More recently, all I’ve listened to is “Inside” by Bo Burnham. Unfortunately. Everybody who lives in this apartment has ADHD or some sort of neurodiversity. And so we all like to auditory stim. And so all three of us have the same auditory stims right now, and that’s just singing Bo Burnham songs. It’s all we’ve been doing for like a month now.

INTO: At least you’re on the same page, so nobody can get annoyed at anybody else.

INTO: Did I see a tattoo there on your arm?

INTO: What is it?

ADAMS: Serotonin and dopamine and some DNA coming off.

INTO: What inspired that?

ADAMS: I got it when I was, I think, a junior in high school, because I did really well on my SATs. And so my mom let me get a tattoo because that was one of the only ways you could motivate me to do stuff and to do well in school, was with tattoos. I saw it on the Internet, and I really liked it, but also I really liked — so, I have depression. And so my brain doesn’t know how to make the dopamine and serotonin work. So I was hoping — as a joke — that if I tattooed it on my skin that my brain would remember how to work with those chemicals.

INTO: That’s self-care, too.

ADAMS: I thought it was really cool. And I wanted to be a psychiatrist at the time, and now I want to be a psychologist, similar. And so: happy brain chemicals.

INTO: It makes sense! And it looks cool either way.