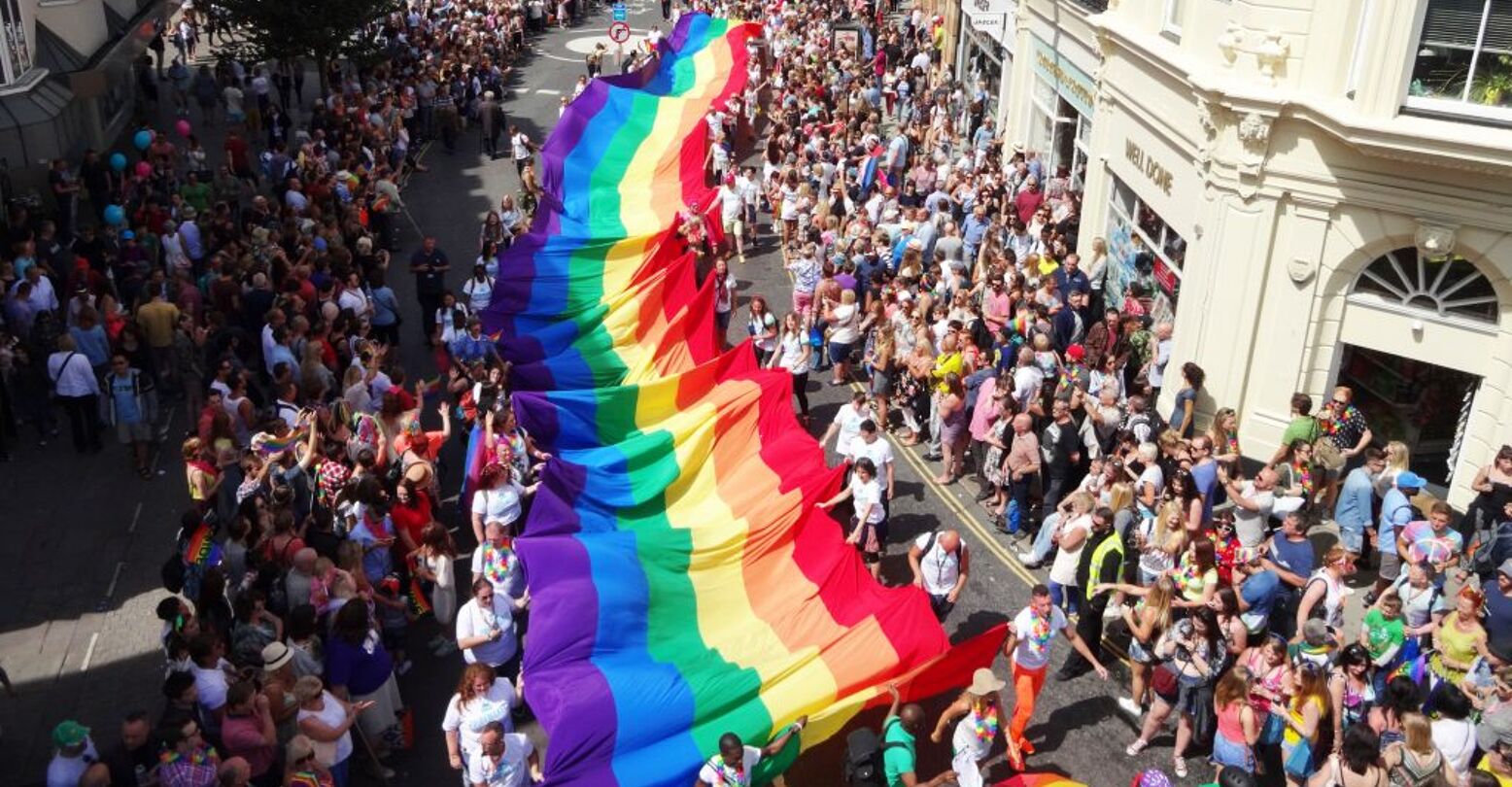 Brighton is undoubtedly one of the gayest cities in the world. From having the highest percentage of same-sex households in the UK to the estimated 160,000 Brighton Pride visitors each year, the city’s LGBTQ community has made Brighton the unofficial gay capital of Great Britain. But this gay-friendly reputation isn’t anything new.

The 18th century sea-bathing fad and good transport links to London brought many well-heeled visitors from the capital, along with a newly cosmopolitan atmosphere. “Brighton’s the nearest southcoast resort toLondon – less than one hour away – so we’ve always beeninfluenced by the capital and been the first place of resort andescape for Londoners. Brighton’s also a holidayresort, and in a holiday resort the normal rules of society are a little bit suspended,” says Ric Morris, of Piers & Queers, a tour of Brighton’s LGBTQ history. 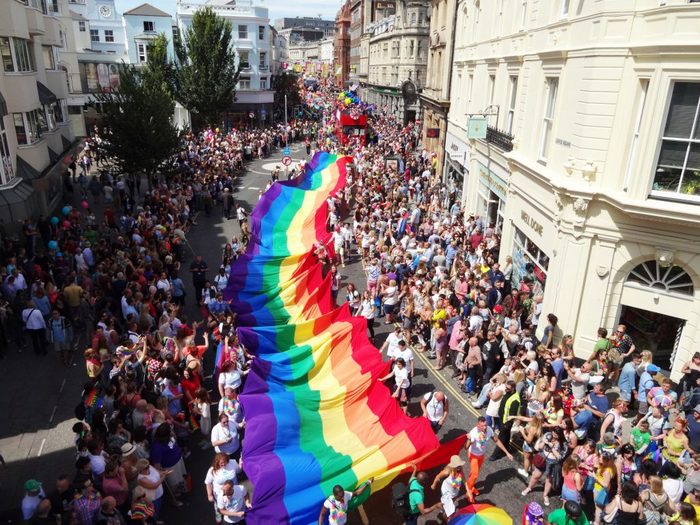 The Peers and Queers tour explores parts of Brighton’s lesser-known gay history and illuminates historic characters of the city’s past including Oscar Wilde and Lord Byron. Morris finds some international visitors surprised at how visible and integrated the city’s LGBTQ community is. The community’s presence can be seen throughout the relatively small city of around 280,000 people with many landmarks having extensive gay histories.

“It’s fun that the Marquess of Queensberry, the father of Oscar Wilde’s boyfriend, whose homophobia led to Wilde’s imprisonment, has a pub named after him, which is now a gay pub. People are also usuallyfascinated by the tale of Brighton’s first’same-sex’ wedding in 1923 when the groom was later found to be female on their birth certificate,” says Morris.

It’s perhaps no surprise that Brighton has long welcomed LGBTQ people as the city itself has a reputation of championing progressive social causes. Brighton is represented in Parliament by Caroline Lucas, the country’s only Green Party MP, who has been an outspoken supporter of LGBTQ rights since being elected in 2010. Over 42 percent of Brighton residents describe themselves as having no religion, the second highest proportion of atheists in the entire UK, and a large vegetarian community also calls Brighton home.

Brighton’s open-minded approach has created one of the most vibrant and exciting gay scenes found anywhere in the world, but while the wider LGBTQ community in the UK is aware of Brighton as an extremely popular gay destination, many are not aware how rich and complex the LGBTQ history of Brighton is. “I think the UK community is aware ofBrighton’s generalimportance, but in terms of history, we are only just learning and uncovering the hidden histories,” adds Morris. 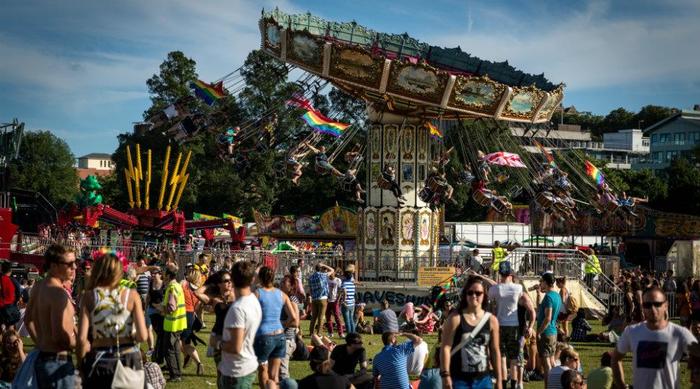 In a bid to display how integral LGBTQ individuals have been to Brighton throughout the city’s history, BrightonMuseum created a specialized LGBTQ trail that guides visitors to a diverse collection of objects which explore heritage through an LGBTQ lens. From an iconic Alexander McQueen silk dress released in 2001 to a René Lalique Palestre Vase, dated to circa 1930 and depictinga group of male athletes striking various poses, a slice of historical and contemporary queer life is showcased for both locals and visitors.

Since the UK marked the 50th anniversary of the partial decriminalization of homosexuality in 2017, a number of cultural projects discussing gay histories have been launched, but for such a broad community there are relatively few comprehensive initiatives examining LGBTQ histories. This is slowly changing with places like Brighton working on these issues.

“We are still in the process of researching our holdings and building our understanding of this complex, nuanced history in partnership with our local communities. I’m really excited to see what will come out of it,” says Kelly Boddington, co-creator of the LGBTQ trail atBrightonMuseum. “The truth is that there is still a lot of research being done as it is an area that has only recently captured the attention of mainstream academics, historians, and curators as a legitimate subject for collection and interpretation.”

Gay life in Brighton can differ from the experience found in self-contained gay villages in larger cities like London’s Soho or Manchester’s Canal Street, where outside of these villages certain areas are less gay-friendly than others. “Brighton’s gay scene is relatively small compared to bigger cities, and almost entirely owned by local businessmen, but as far as I’m concerned, every pub in the city is gay-friendly. Again, that’s just down to local people being more open-minded,” according to Nigel Tart, Brighton resident and one of the co-founders of LGBTQ History Month.

The center of gay Brighton is in St James’s Street, with the wider Kemptown area offering pubs, bars, and nightclubs for all members of the LGBTQ community. From The Bulldog, Brighton’s oldest gay bar, to Club Revenge, which holds Brighton’s biggest lesbian night, and bear bar The Camelford Arms, few are left out of the gay scene.

Brighton has some of the most established organizations and services supporting LGBTQ people anywhere in the entire UK. Both charities and local authorities have launched projects to meet the diverse needs of the LGBTQ community, from the Brighton & Hove LGBTQ Switchboard, a telephone helpline opened in 1975 that receives over 5,000 calls a year, to local support group, The Clare Project, which gives a safe space to people exploring issues around their gender identity.

“The Brighton police force were one of the first to set up a hate crime unit, with the council having won awards for its work in schools and have started doing groundbreaking work with the trans community. The health authorities have a good record of providing appropriate services, especially with an HIV prevention focus,” according to Mr. Tart.

There is a limit to how much LGBTQ safe spaces can protect against the realities of anti-gay attitudes and hate. UK gay rights organization Stonewall published research earlier this year showing that 20 percent of LGBTQ people in Britain have experienced a hate crime or incident over the past year. Some of the most violent and egregious anti-LGBTQ attacks have taken place in gay ‘safe havens,’ with some attackers singling out these areas due to the high LGBTQ populations.

Prejudice doesn’t just come from outside the LGBTQ community with certain members feeling excluded within what should be safe spaces. Older LGBTQ people may not find many spaces that don’t predominately cater to younger people and disabled LGBTQ people can find physical barriers to entering gay-friendly venues.

Even with the problematic elements found in gay villages, it’s still better to be in an environment that, on the whole, let’s all types of LGBTQ people live the life they choose without fear of anti-LGBTQ hate. It’s unlikely gay-friendly neighborhoods like San Francisco’s Castro, Le Marais in Paris and Brighton, will become irrelevant anytime soon.

“Brighton is a true haven of acceptance for all people, including lesbian, gay, bi, and trans folk, and truly prides itself on being somewhere where all people feel able to be themselves,” says Matt Horwood, Senior Communications Officer at Stonewall.

“Unfortunately, so many visitors describe this as an ‘escape’ from the real world; it’s a shame the ‘real world’ can’t be just like Brighton in that sense,” he continued.