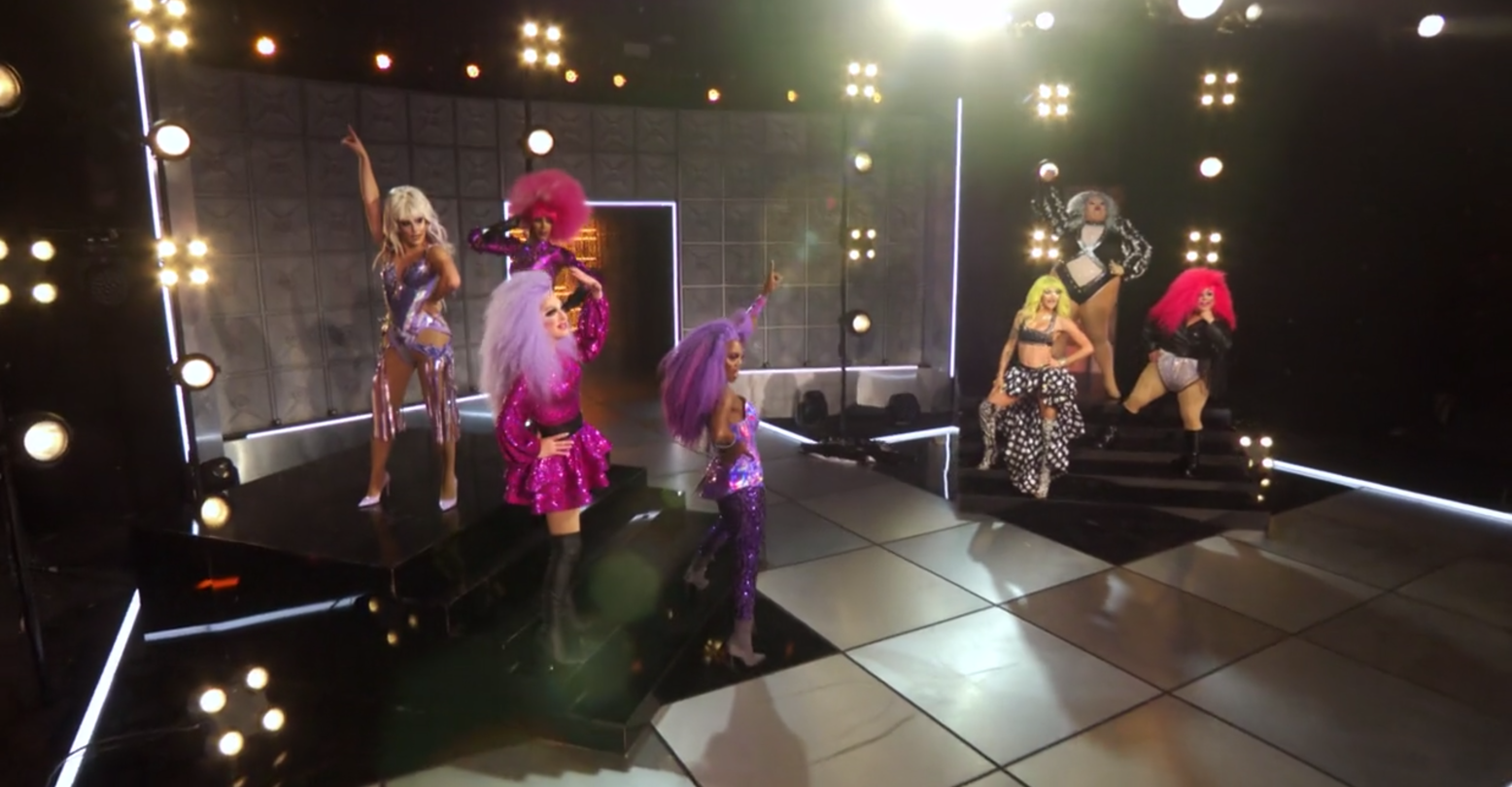 Welcome back to the INTO RuView, where we recap “RuPaul’s Drag Race” week by week. The seventh episode of All Stars 6, “Show Up Queen,” saw the queens writing verses and creating choreography for a girl groups performance — and, ohmygod, this episode has the gaggiest ending yet.

We join the girls after A’keria’s elimination, where Ginger reads out the votes. Turns out it was anonymous — sorry, unanimous — for A’keria. I mean, duh. Who would vote out Ra’Jah?

As the girls are sitting around, Jan, out of nowhere, makes an incredibly shady comment. “So, I’m looking around the room, and I’m seeing that we have five people who have won a challenge,” she says, “but I also see two people who haven’t yet.”

Damn, bitch, why are you rubbing salt in the wound unprompted?? But it’s true: everyone left in the competition has won a challenge, apart from Eureka and Pandora. BUT, Eureka and Pandora are also the only two who have never been up for elimination. Queens of consistency.

When the queens come in the next day, Kylie sings “♪ Ohhh my god ♪,” a refrain started by Ra’Jah that’s become the season’s unofficial jingle. They see A’keria’s mirror message: “I AM The Mood + The MOMENT! The light is 4EVA BRIGHT.” A’keria’s positivity was so lovely this season — even if she didn’t kill the competition this time around, she definitely made her mark.

Ru enters to tell the queens that this week is the girl groups challenge. They’ll be working in teams to write lyrics and make choreography for the song “Show Up Queen,” which is meant to be an anthem about showing up to make change. Their lyrics should “entertain, inspire and teach the children just what you stand for,” says Ru.

As last week’s winner and surviving bottom queen, Kylie and Ra’Jah are team captains. It’s a schoolyard pick for teams, which, while certainly demoralizing if you’re picked last, does make for some fun petty drama.

Ra’Jah choose Jan and Trinity, while Kylie chooses Ginger and Eureka. Pandora is picked last, so she ends up on Ra’Jah’s team. Ra’Jah, sweetheart that she is, still welcomes Pandora with open arms, leading their team in a twerking session.

Ru points to Pandora: “Look how she gets down!”

“You should see her try to get back up,” quips Ginger. Ha.

As the groups work to plan their lyrics and costumes, Eureka praises the message of the song. “Drag and activism always go together,” she says, “so I’m loving the whole concept behind this challenge.” So true! I know in my homebase of Chicago, local queens are always at the forefront of social change, particularly in holding queer spaces accountable. (Go support your local queens, by the way.)

Earlier, Ginger had commented that her outfit, a pink leopard print romper, was like camouflage to the walls of the werkroom. Now she puts into practice to spy on Team Ra’Jah, creating the gayest edition of “Where’s Waldo?” in history.

Ru meets with each team to discuss their verses. Team Kylie is first, where Kylie opens up to Ru about the impact she had on her. At a book signing after Season 2, Ru had signed Kylie’s calendar with the phrase “self love.”

“It spoke to me so deep,” Kylie says. “And I was like, ‘why hasn’t nobody ever told me that it’s okay to love me?’” Y’know, Ru’s armchair psychology does get on my nerves, but seeing the positive impact it can have was very sweet.

Team Ra’Jah’s up next, where Trinity reveals her verse will focus on HIV/AIDS awareness. Ru warns her not to come off too preachy, advice which Trinity quickly snaps up. I’m loving her versatility and adaptability this season — I really hope to see her in the Top 4.

Next, the girls record their verses with producer Leland. These segments on the show always make me laugh: they seem to purposely play mismatched background music while the queens record their raps, making everyone sound like they have exactly zero rhythm. Which, true, some of them don’t.

As Trinity records, Leland encourages her to amp up her energy and change some words to be more confident, leading to the lyric, “If you blink, I’mma end up with the crown.” Jan and Ra’Jah quickly decide to never blink again. “Bitch, I’m not blinking worth a damn,” says Ra’Jah.

Next up is self-directed choreography, which is almost always a mess on this show. Team Ra’Jah goes first and elects Trinity to be its choreographer. A wise choice! She’s a strong dancer, as are Ra’Jah and Jan. Pandora … well, as Kylie says, “Pandora has years of … years.”

And yeah, Pandora is clearly the weakest in the choreo department. This prompts Ginger, watching from the sidelines, to interject with her opinion that Trinity should step out and finesse the problem areas.

Trinity does end up with the last laugh, though, when Team Kylie takes the stage to choreograph. They decide not to have a leader — wrong move. Ginger and Eureka are two personality powerhouses with a lot of ideas, which is never great in a collaborative setting like this. Kylie quickly realizes this too, asking her coffee, “What have I done?”

Team Ra’Jah smiles and laughs at their struggle. No shade! I’d do it too if I were in their position.

Before we move onto the performance, let’s just take a moment for this gown on RuPaul:

I mean, ohmygod. This is one of the best things she’s ever worn. Maybe that has something to do with the fact that her designer, Zaldy, is the guest judge this week and wanted to show out. Either way, STUN.

It’s performance time! The song is honestly really catchy — I may be streaming it in my private Spotify sessions very soon. It so happens that the two weakest verses are up first: Jan and Pandora. Jan’s verse is strangely self-centered for a song meant to be about activism and uplifting, while Pandora takes a bizarre amount of pauses that lead her verse to be pretty empty of meaning.

Most of the verses are actually really fun, but I had three standouts: Ra’Jah, whose vocals, message and dancing are all on point; Trinity, who manages to make a verse that’s both fun and inspirational with a heartfelt reminder to know and be proud of your HIV status; and Kylie, who I thought had the best overall lyrics and flow, if the message was a tad lacking.

I mean come on. I’m a sucker for monochrome, and this look captures the essence of tropical aesthetics while still being perfectly fashionable in a delicately camp way. That’s all the pillars of what I want in a drag look!

I love this look for all the reasons I love Kylie’s! These feathers are amaze. It almost got my top spot, but I prefer Kylie’s color scheme, so it’s a close, close second.

A perfectly fine look, but at this level of competition, the devil is in the details. The simplicity of this silhouette combined with the misplaced pageant jewelry mean Eureka just doesn’t hold up on this runway next to everyone else.

Not a bad look by any means, just overly simple. Both Ginger and Jan went for this J.Lo in Versace aesthetic, but I appreciated that Jan added a character on top of it, pushing Ginger down in my rankings.

I thought all the judges’ critiques this week were on the money, but damn, they love to cut deep with Jan. Ru told her she was technically perfect, but “lacked soul.” How do you come back from being called soulless?? Well, spoiler alert, you don’t.

Anyway, Trinity rightfully wins the challenge, making her the first queen this season to win twice. Technically, this makes her a frontrunner — I would not at all mind crowning Trinity this season, though Ra’Jah’s still my main girl.

Jan and Pandora are up for elimination, and the girls are understandably conflicted about who should get the boot. Pandora has never won anything, but she’s never been in the bottom — completely consistent. Jan, on the other hand, has been ping-ponging from top to bottom these past few episodes. It kinda comes down to personal preference on this one.

Let’s take a moment for Kylie, who, after dramatically casting her vote, takes one more look in the mirror. Can’t blame her.

This week’s lip sync assassin is Alexis Mateo! BAM! Alexis not getting the chance to lip-sync on All Stars 5 was a travesty, so this is a blessing for us viewers. And the song is “Dance Again” by J.Lo — could there be a more perfect pairing?

Trinity and Alexis seem pretty evenly matched! Until Trinity’s wig comes off mid-performance. And no, it’s not a reveal — it’s a mistake, as Trinity’s shocked face gives away. Fun and bizarre fact: every time Alexis has faced someone in a lip-sync, the other queen has lost their wig. Seriously. She might be a witch.

Given the wig fiasco on Trinity’s end, Alexis unsurprisingly nabs the win. She reveals the group’s choice: Pandora. Aw, I’ll miss — wait, what? Alexis has another lipstick: Jan. Holy shit. It’s a tie, which means Trinity has to break it!! She reveals her choice: Jan.

Ohmygod, poor Jan. The absolute ROLLERCOASTER of emotions, from thinking she’s safe, to thinking there’s maybe a double elimination, to having a shot at safety depending on Trinity’s choice, all to get sent home at the end while Pandora stays. I know there’s not some kind of conspiracy against Jan’s wellbeing on this show, but at times like this, it sure feels like it.

As Jan leaves, she remarks that the other girls voted her out because she’s a threat. Really? When ​​she’s the only remaining contestant to have been up for elimination more than once? Sure, Jan.

Next week is finally the Snatch Game! … Of Love. Well, I’ll take it. I can’t wait to see Ra’Jah, who’s never been in a Snatch Game, and Kylie, who went home in the show’s very first run of the now iconic challenge. Here’s hoping that Pandora, who almost won that same Snatch Game, can redeem herself. Otherwise, she’s likely the next boot. I’ll leave you with Trinity’s advice: “You don’t want a new car; you don’t want no payments. Get you a used car.” So true.