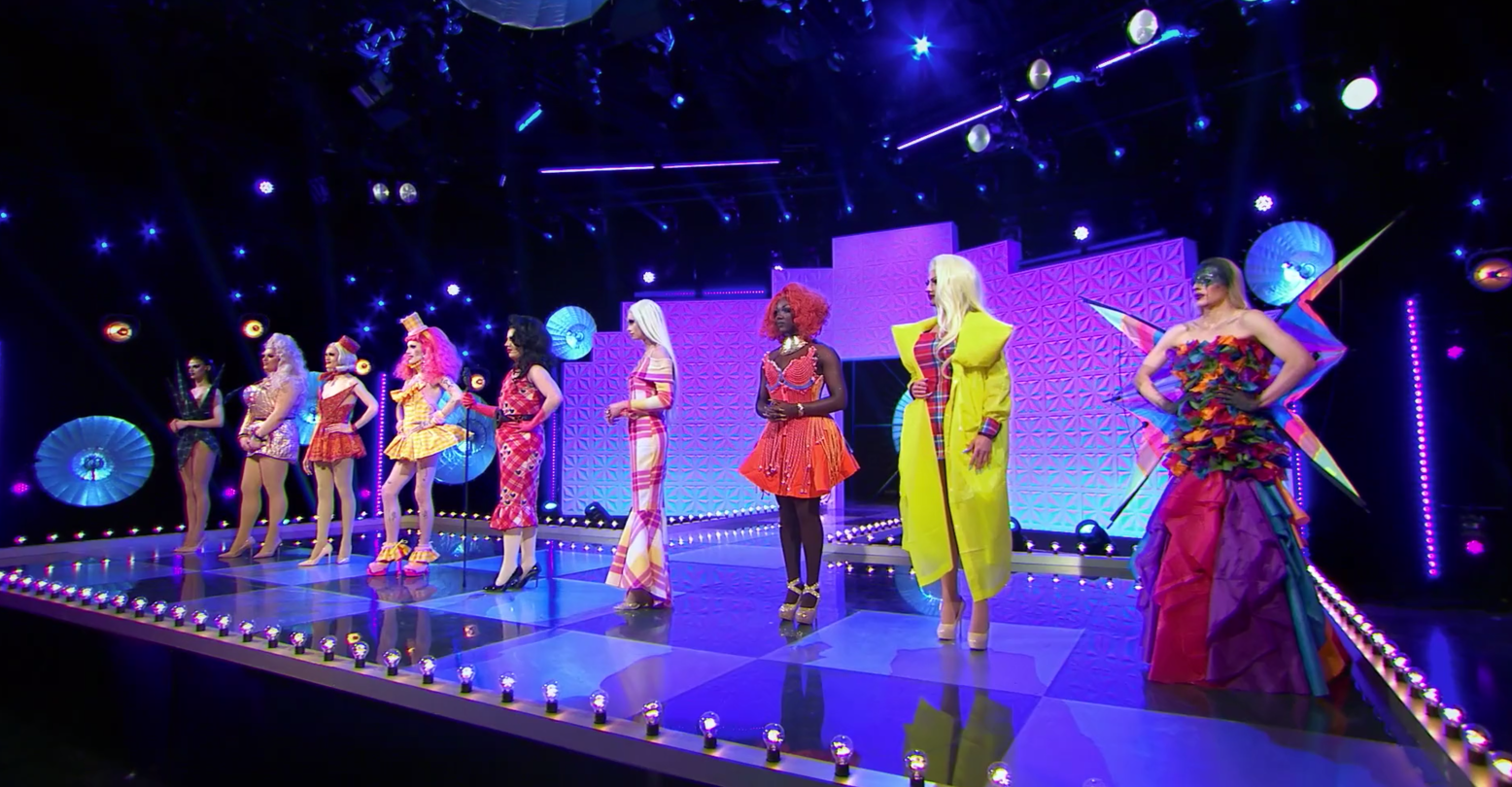 Welcome back to the INTO RuView, where we recap “RuPaul’s Drag Race” week by week. The third episode of “Drag Race UK” Season 3 saw the queens tackle a design challenge themed around the great outdoors. Why the episode had so few glamping puns is beyond me.

The girls walk in after the lip sync to see Elektra’s message, which she, for whatever reason, signed with Vanity’s name. Perhaps she’s passing on the curse of lip syncing twice in a row?

On the couch, the main topic of conversation is Victoria’s knee, which Ru announced might send her home if a doctor says it’s unsafe to continue in the competition. Victoria is crushed, obviously — beyond the disappointment of having to stop competing, imagine how much time and money she invested in a whole catalog of looks for the show.

The next day, Ru comes in dressed suspiciously like Fred from “Scooby-Doo.”

He confirms the worst: Victoria’s injury has taken her out of the competition. Booooo! Luckily, she’s almost guaranteed to come back for Season 4. “I have a sense that we haven’t seen the last of her,” Ru says. No need to be secretive; we know how this works at this point.

This week’s mini-challenge is to create a profile for the hottest new dating app, Findhr. That means the queens have to get into straight-dude drag—now I’m even more upset Victoria isn’t here. She would’ve ATE.

There are a few standouts: Ella, who’s not afraid to get cheeky, Kitty, whose falsetto caught everyone off-guard, and Scarlett, whose impression is weirdly convincing. Even those with less successful characters like River and Krystal are still entertaining, just by virtue of the challenge. UK minis always blow the US out of the water!

Scarlett wins the challenge (I agree), granting her a 15-second head start in the maxi challenge, which is to serve two “campy” looks on the runway. “Campy” meaning outdoorsy, not, y’know, campy — though I’d live for that version of this challenge too.

The first look, Happy Campers, the queens brought from home. The second, Campfire Couture, they have to construct from “tents, sleeping bags and other outdoorsy materials,” Ru says. Let the design challenge begin!

This episode has a lot of werkroom content, which is just a great way to get to know the cast. Ella and River get a lot of the screen time, which I don’t mind — they’re two of my favorites. The general gist is that River’s a seamstress and Ella can’t sew. But the gag is that, in this challenge, their roles reverse themselves: Ella loves the garment she’s making, while River is struggling enough to scrap her whole design and start over on the day of the runway. Yikes!

As Kitty and Charity sit sewing next to each other, Charity opens up about her experience living with HIV. Her stories of receiving hateful messages on dating apps reemphasize what so many PLWH know all too well: with modern medicine, the stigma is often worse than the disease.

Charity points this out, saying that she’s undetectable and thus untransmittable. Despite this, she’s struggled to find connection due to her status.

“The stigma hasn’t gone anywhere,” she says. “That’s why it’s important that we talk about it.”

Luckily, “Drag Race” is giving her the platform to do so, and Kitty is there to stand in for the audience and give Charity a massive hug.

Before we get to the challenge, we must address this week’s guest judge: Nicola Coughlan, who joins the ranks of the best guests in the history of the franchise. She’s an ICON, and I don’t know a soul who’d complain if she became a permanent fixture on the panel.

This category produced a lot of the same: glammed up Girlguides and rich ladies on vacation in the wilderness. That’s why Charity stood out in such a wonderful way: bringing horror to the runway and doing it well isn’t easy, but Charity’s proving to be an expert. Every detail is impeccable here. Does the concept make the most sense? Maybe not. But she looks so damn good, I don’t care.

Scarlett also stood out from the pack. Her Katniss meets Joan Jett was one of the freshest takes on the theme, and her commitment on the runway, throwing an arrow at the judges, took it to the next level. This girl is on fire! … Get it?

WHAT is this color palette? WHAT is this concept?? WHAT about it says camper??? Her bottom two placement was deserved for this look alone.

Choriza was aiming for a high fashion interpretation here, which could’ve worked if it were actually fashionable. Instead, we’re left with the worst of both worlds: she doesn’t look stylish, and she doesn’t look like a camper.

I mean. Come on. Vanity may have called this look “off-the-rack” backstage, but to me, it’s absolutely couture. Is it the most inventive silhouette? No. But is it clean and near perfectly executed? Yes. Does Scarlett look stupidly gorgeous? Also yes.

Krystal was the only one of the bunch to turn out a look that I could really see on a haute couture runway. The striking silhouette, the dark palette, the dramatic makeup — it all comes together to create my favorite Krystal look of the season so far.

Oh, baby no. Veronica knows this look isn’t good — there’s no silhouette, and it’s clearly barely held together. Her styling didn’t help; this tangly synthetic hair was the rotten cherry on top.

Not horrible! But not good. The hemless skirt is a major no-no, and really, Vanity just glued ropes to a corset and bra. It’s not gonna cut it.

This week’s tops are Scarlett, Krystal and Ella. I’m not mad at it, but Charity deserved some love for her looks — the first one was crazy impressive, and the second was near the top of the pack. I’m getting the sense the judges just aren’t into what Charity is bringing, which is such a waste of her talent. I’d have swapped her for Ella here.

The bottoms are Choriza, Veronica and Vanity, which I sadly agree with. I love all three of these queens, but they underperformed this week. Luckily, Choriza still managed to come out on top in critiques by iconically explaining the story of her second runway. Here’s the torrid tale for your reading pleasure:

I found who I thought was my first love and he invited me to his tent. He jizzed in my eye and blinded me in the middle of the night. He left running, and I went to find him, but obviously I was blind. So I found this owl, so we became friends. And since then, he’s been guiding me through the night.

I’d watch the film adaptation. And thanks to Choriza’s endless creativity, I actually can:

Scarlett is named the winner of the challenge. I agree — she’s the only queen who brought it hard in both categories and told two completely different stories.

Meanwhile, Choriza is saved from the bottom two for her storytelling prowess, leaving Vanity and Veronica to lip sync to “I’ve Got the Music in Me” by The Kiki Dee Band. Veronica never lip synced on Season 2, so this is her big shot, and she delivers!

Unfortunately, she can’t deliver as hard as Vanity. Plus, Veronica’s outfit is holding her back — by the end of the song, it’s literally all over the stage. Ru declares Vanity the winner, and Veronica is told to sashay away.

GAG. A challenge winner from a previous season, sent home on just episode three? Nearly unheard of. Usually returning queens have a little more plot armor than that, and considering Victoria already left this episode, Ru easily could’ve spared them both.

But no, Veronica’s really gone. And for anyone like me who’d been mixing up Victoria and Veronica’s names, you’re in luck — you won’t be saying either of them anytime soon.

Next week is the legendary girl groups challenge. Really, this is THE challenge of “Drag Race UK” — both times it’s happened so far, it’s produced hit songs that literally charted in the UK. Those are big shoes to fill, and I’m not sure if this cast is up to the task. Only one way to find out.