I’m in a ride along with a drag queen dressed in a dime-store taxi driver costume and she’s explaining to me why people like the band Phish. Erik Koral, who goes by the name “Erika Simone” professionally, followed the long-running jam band around the country after graduating with a degree in sociology from the University of Santa Cruz.

I tell him that I just “don’t get the whole Phish thing.”

“It’s a lot improvisation,” says Koral, who transitioned from being a Phishhead to working as a music marketer in Los Angeles for nine years. “It’s a lot of risk-taking, and it doesn’t always work. But those magical moments are worth sticking around for. They have a different set list every time, and they play the songs differently every time. One day they’ll play a reggae version of one of their songs, and the next day they’ll play a heavy metal version of it.

An appreciation for improv is perhaps the best possible job training for Koral’s newest venture: driving a Lyft in six-inch heels. The 42-year-old signed up with the ridesharing company three years ago after shutting down his consulting business, hoping to find a low-stress job while he figured out what was next.

The idea for the aptly-titled “Driving Is a Drag” came naturally. Koral had recently come out as bisexual at the age of 38 and began experimenting with cross-dressing. To explore his gender fluidity, he created his Nina Simone-inspired alter ego, even making a Facebook page for her. After three days on the job, Koral says he had an epiphany: “Holy crap, what if Erika picks these people up?” 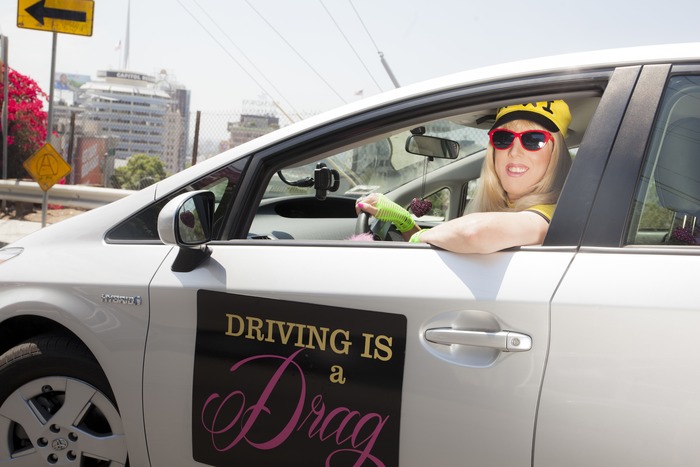 Although the character’s name is borrowed from the iconic jazz singer, her personality is all Koral. He describes his creation as a “more caffeinated version” of himself, but after a decade of promoting bands, the self-characterization can’t help but sound like a marketing pitch.

“She is a very loving and accepting drag queen that is very kid-friendly, very G-rated,” he says.

But what’s very clear from riding around in the back of Koral’s cab, which is decorated with a license plate reading “DRAG4LYF,” is that he knows the hustle well. Our first pickup was Donna, a 50-something nurse leaving her shift at Cedars Sinai.

“It’s a special ride today,” Koral announces to the woman standing on the sidewalk as she nervously enters the cab. “You’re now a passenger with Driving Is a Drag.”

Koral has an easy, intoxicating rapport with passengers, his gregarious charm quickly thawing the customer’s initial surprise. The sight of Erikaa six-foot flash of yellow with a Cheshire grinopening a car door isn’t what most people expect when they call a Lyft.

By way of explanation, he tells Donna that he came up with the idea for a drag queen taxi service after reading a Wired article about other themed cabs, including a man who drives around on weekends dressed as Batman and another with a karaoke booth in the back of his car. One cabbie quizzes his passengers on hip-hop trivia, while another picks up riders as The Dude from The Big Lebowski.

“I thought, ‘I’ve got to do something creative here,’” Koral says. “Otherwise, what’s the point?”

Even in casual conversation, Koral never turns off the hype machine. He’s a born self-promoter. Koral tells Donna, who moved to L.A. a decade ago to support her son’s acting career, that his long-term goal is to establish a ride-sharing service for the LGBTQ community. His elevator pitch is to get West Hollywood to sponsor a pilot version of the program that can then be rolled out city-wide.

Many of Koral’s passengers rely on him to be a safe space where they know they won’t face harassment from drivers. A transgender woman calls his number when she needs to run day-to-day errands, like picking up groceries or dry cleaning.

“She felt that she was constantly living in fear for her life,” he tells me in a phone interview. “When I picked her up, I was the best thing that she had seen in years.”

Koral says this is an all-too-common problem in ride-sharing services.

“I’ve heard stories of trans girls standing on the corner or the drag queen getting out of the show late night and being ignored by the driver,” he says. I tell him that when flagging down an Uber near New York’s Union Square, the driver cancelled the ride as I opened the door wearing pink pants and a bow tie.

Last year a gay couplereported being kicked out of their Uberafter sharing a backseat kiss during San Francisco Pride.

“That should not be happening whatsoever,” Koral says. 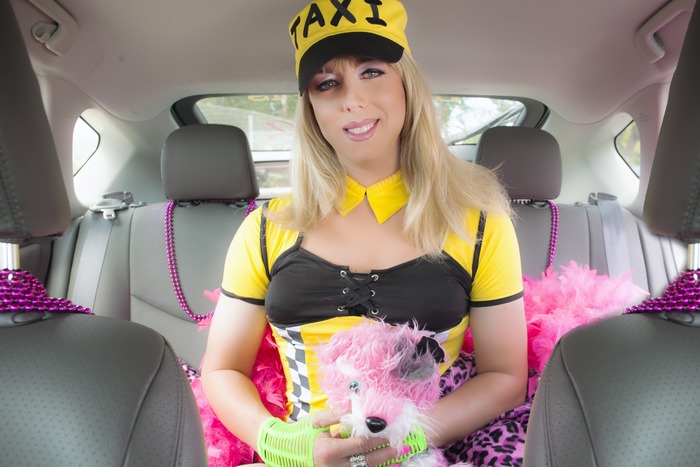 There’s already precedent for a ride-sharing service that caters to LGBTQ users:Homobiles, a pay-what-you-can service based in San Francisco, was established by former Tribe 8 singer Lynnee Breedlove in 2010. But as is his habit, Koral wants to go bigger. His pie-in-the-sky dream, as he tells Donna, is to start a drag queen party bus franchise, like “Priscilla Queen of the Desert in every major market in America.”

Koral claims that he has experienced firsthand the need for a ride-sharing app that’s for the community, by the community. When he first started driving in 2014, Koral says that he was “scared shitless.” He wasn’t sure whether people would spit at him, beat him up, or kill him.

The vast majority of his customers, Koral says, have loved the idea. They take selfies and share photos on Instagram of the experience. But others have been more reticent. One rider turned him down, asking to get another car. Another time two guys snickered at him in the back seat, quietly making homophobic comments.

“I wanted to say, ‘You’re being highly offensive and get the fuck out,’ but I just stayed close-lipped,” Koral says. “Luckily, it was a short ride. I couldn’t wait for them to get out.”

He once had to kick out a rider who wouldn’t stop massaging his neck from the passenger’s seat.

But Koral says that putting himself out thereand occasionally risking his own lifehas offered an unexpected opportunity to educate passengers about LGBTQ issues. A few months after he started Driving Is a Drag, former Olympian Caitlyn Jenner came out as trans in a widely publicized interview with Diane Sawyer. Riders, he says, suddenly began to ask him a flurry of questions about what it means to be transgender.

“People were realizing there’s a much wider spectrum of gender and sexuality out there than they knew,” Koral says. “A lot of people had no idea that there was a distinct difference between someone that does drag, someone that’s a cross-dresser, and someone that’s transgender.

“There’s just been a lot of generalizations and misconceptions out there,” he continues.

Koral says that he frequently receives emails from former customers who say that his example has inspired them to come out to their parents, and he claims he’s “floored every day” to have had such a profound influence in people’s lives.

But the biggest impact he’s made by driving around as Erika is on his own life.

Growing up, Koral was made fun of by other kids for being effeminate throughout school. He claims he was called “every homophobic word in the book.” As a closeted adult, his personal relationships suffered. Koral struggled as a result of the desires he buried deep inside.

“When that dark secret festers inside of you, good things usually don’t happen,” Koral recalls.

Becoming Erika helped him to live his life authentically for the first time. Koral is currently in a relationship with a bisexual woman, and since driving for Lyft, he has had the opportunity to meet some of his heroesincluding RuPaul.

“Erika allowed me to own the fact that I have these other aspects of who I am and to be proud of it,” he says. “It’s been the most punk rock thing I’ve ever done.”