It’s a sunny summer day and my girlfriend Courtney and I are hanging at the community pool with half a dozen septuagenarians. “I forgot to take my ears out!” one of them yells as she climbs out of the shallows and plucks hearing aids from beneath her bathing cap. We lay back on the edge and soak in the sun.

A few days later, we learn we’ve been banned from the pool. Or, rather, we learn that a neighbor named Bonnie, the local busybody, has dug up an arcane regulation; No one under 55 may visit the pool unless accompanied by a resident. We are incensed there’s a major kink in our summer plans.

Courtney and I are still a collective 36 years away from AARP eligibility, and normally spend our time in our San Francisco Mission district, where you can’t throw a $5 latte without striking a 20-something burner or a 30-something techie (and if I’m lucky, a few artists of indeterminate age). Suffice to say, this is not our normal social set. But that all changed when we rented our place for June, July, and August with plans to road trip the U.S. But when work called me back to California, we needed a place to stay.

My dad offered us his house in Healdsburg, a cute tourist town nestled in Northern California’s wine country. It’s set on a quiet street near the river, a half-hour’s walk from downtown. The catch? You have to be 55-years-old to own property in the neighborhood, so pretty much everyone is a senior.

Was it against the rules for us to be here? We were afraid to ask. 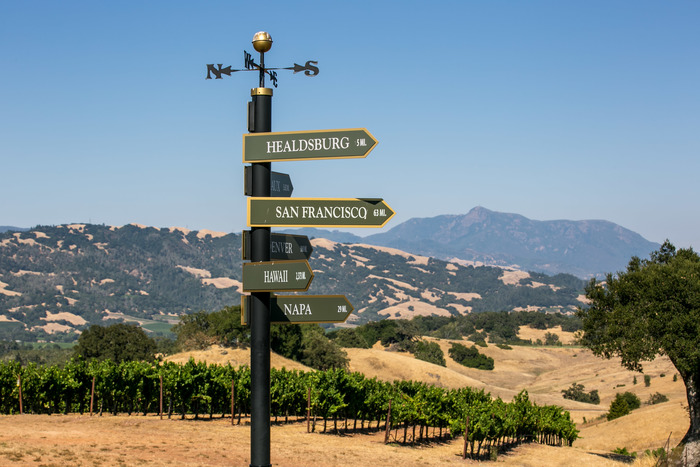 It has been hard to get used to the quiet. I’m accustomed to loud arguments, sirens, the sound of glass smashing as my car gets broken into. None of those sounds ever terrified me as much as the scuttle of a salamander in the rose bushes outside my bedroom window at 11p.m. In the first weeks, the crinkling of a plastic bag unwinding itself became a burglar. The sudden whoosh when the air conditioner activating becomes an air strike.

Then, there’s the older people, and by that I mean, everyone here. If we to stay around the neighborhood, we rarely see a soul under 60, and most people are 70+. It means we get stopped by Jerry in the house by the corner, who’s often outside by late morning, watering in his suspenders and hat.

“My father’s father hated my father’s music. My father hated my music. And I hate your music!” he says with a grin. “When I die, it’ll take the mortuary two weeks to rub the smile off my face.” He shouts as we part ways.

“I have a Yorkie, too, a woman named Cathy tells us, looking at my canine. “You know what you should tell her?” she asks, getting riled. “You should say, ‘Did it hurt? Did it hurt when you fell from heaven?!’” She waits for the punchline to land, as Ruby stares at a distant squirrel. With these animal parenting tips, I may be able to scrap the dog trainer.

Peter, who lives on our block and has been banned from washing his hair at the pool shower an indignity he suffers bravely is outraged when he hears of our underage pool ban.

“You give some people a little power, and they go crazy with it,” he tells us. Later, I encourage Ruby to do her business on the periphery of Bonnie’s front yard.

At times, our busybody neighbors really come in handy.

One morning, Courtney and I are deep in our work when there’s a knock at the door. An apple-shaped lady with white hair is holding my dog, who’s covered in leaves and debris, a tiny criminal fresh from her prison break. “Is this yours?” She asks. “She was running around my garage.” I grab my errant child, say, “thank you so much” and retreat into the house.

Sometimes, when the days get too hot, we bring the world’s least-capable $30 raft to the river and float down it, our paddle sending us in capricious, sleepy zig-zags. The rush of snowmelt has long since warmed, and sometimes the only way to be sure we’re making any progress at all is to watch the grass creep past us on the shoreline, the blobs of electric-green algae drift by.

On another occasion, Courtney and I are walking down the street just past the neon green sign that’s shaped like a life-size human child. It holds an orange flag, with the word SLOW written across its body, as if going fast were an option.

A hybrid SUV pulls up beside us. In the city, this kind of unsolicited car stop would be the precursor to a drug deal, abduction attempt, a drive by, a person lost with a stalling engine on the wildly sloping streets. But in this neighborhood where there are no hills or drug dealers, the man in the car says his name is Mike. He hands us a flier. He’s showing slides from a recent trip to Cuba in the clubhouse on Saturday. “We’re trying to get people here to actually hang out,” he says. I imagine shuffleboard games by the community center, potlucks with casseroles in white ceramic dishes, the clink of glassware.

Coming home from an evening walk one night, a police cruiser speeds past us and turns down our street. We follow it to see what happened. I hypothesize aloud about possible explanations. “Most likely they’re here for domestic violence, elder abuse, or a break in,” I say. “But it could also be a 5150 call,” Courtney mentions, referring to the police code for psychiatric emergencies. “Did you turn the stove off before we left?” A fire truck speeds by.

But as we pass the house, an ambulance pulls up, and paramedics haul a gurney out of the back. Red lights splash across the front of the house and inside, I see a woman in sweats with disheveled hair speaking to the firemen, as they both look at someone in a corner of the room I can’t see. The emergency feels like it doesn’t belong here, but, of course, it is here.

Somehow, over the summer days, amidst the silent streets and slow moving denizens, I’d been lulled out of my city vigilance. I’d begun to think that nothing bad could ever really happen here. I’d gratefully bowed out of the rat race, the 24-hour news cycle, the gut-wrenching reality TV show that has become American society.

The next morning, I wake up and see that Trump has been up taunting North Korea on Twitter. A few days later, Neonazi hatemongers march in Charlottesville, and a young woman is killed while protesting for civil rights.

Soon, I know, the leaves will turn to yellow and the days will grow shorter, colder. I’ll go back to San Francisco and fight the fog, the rent hikes, the political assaults on People of Color and queers. I’ll reenter the stream of life. And, I’ll be grateful to the place that gave me a break from it, that reminded me of a simpler time, when the greatest assault I faced was age discrimination against the under 55.