There is a fine line between saying something that sounds right and what is actually correct. That line was crossed, set on fire, and its ashes kicked away in an OUT piece entitled “Dear Gay Men, Stop Telling Women They Can’t Be in Gay Bars.”

In it, writer Rose Dommu complained about the complaints some gay men have leveled towards women who frequent gay bars and behave in ways that make them uncomfortable. In place of nuance and measured consideration for a complicated subject matter, Dommu instead offered a diatribe with the sole intention of “getting the girls together.”

There was the declaration: “Dear gay men, stop telling women they can’t be in gay bars,” then the condescension: “I know this might surprise you, but in 2017, women can go anywhere we want to! And furthermore, we don’t need your approval to do it!” And then some lip service to reasonable criticism:

“I understand that bachelorette parties can be annoying, that they do harass and tokenize gay men, and I would have nothing wrong with someone saying, ‘I don’t think bachelorette parties should come into gay bars and harass and tokenize gay men,’ but saying that no women should be in gay bars is a false equivalency because not all women in gay bars are there to drink through penis straws and request that the DJ play ‘The Thong Song,’ even though the DJ totally should play ‘The Thong Song.’”

For the record, “The Thong Song” should be totally left off the playlist, alongside Prince’s “Kiss,” Montell Jordan’s “This Is How We Do It,” BBD’s “Poison,” and every other song that’s been played to death, reincarnated, and played to death again. Play their other hits, or even better, their deep album cuts for the sake of much-needed variety.

In any event, then came an exhaustive reach: “And even if you did, requiring some kind of reason for a woman to be in a gay bar, or an excuse or some gay to supervise her, is misogyny. Questioning a woman’s right to be anywhere or do anything is misogyny.”

Something that is designated for a specific group doesn’t necessarily make it discriminatory towards any other. While I, like so many gay men, have brought women to gay clubs and bars, there is something to be said about recognizing that for many gay, bi, and queer men, a gay bar or club is a place of sanctuary. These are places created with the sole intention to provide a social avenue for people in search of community. If an outsider enters that space and disrupts it, do the people who create and populate the space for them have a right to complain?

Perhaps some of that criticism is inartful, but that is not the overwhelming majority. Thus Dommu is guilty of generalizing gay men the same way she claims many critics generalize women. For the record, obnoxious behavior from straight women is not limited to bachelorette parties in a gay club. 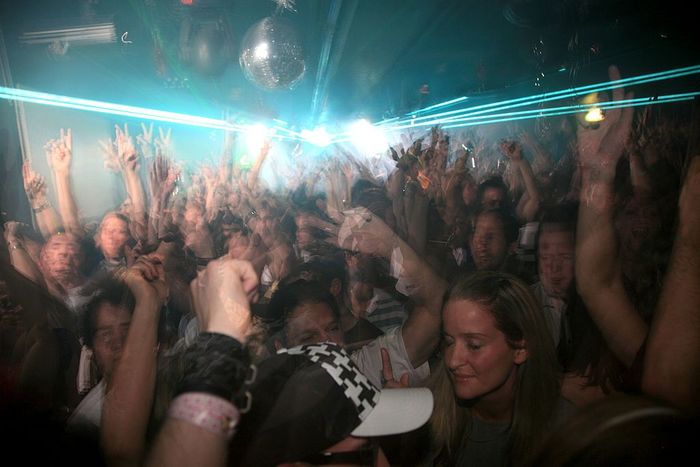 I have had women grab my dick, inform me that I am “too cute to be gay,” been greeted or saluted by whatever gay Black colloquialism they discovered by way of Bravo programming, or summoned to dance and fill out whatever fantasy they likely got from some TV show or concert footage found on YouTube.

These women behave in ways that ironically mirror the noisome habits of the obnoxious men in straight clubs they turn to gay nightlife to temporarily escape. Finally, most gay men have no issues with queer women and trans women in gay bars, they share similar struggles and act accordingly. It’s very clear who is being criticized. If the bitching and moaning of a few Facebook friends doesn’t apply to you, say fuck it and scroll by.

Sweeping these genuine gripes under the umbrella of “misogynism” reads as both a reach and irresponsible. Maybe some are guilty of this – no one would deny that misogyny exists within the gay community, just as it does in society as a whole – but the piece read as hollow and continues to wrongly conflate a venue having a theme with a civil rights issue.

To wit, Dommu uses this as an another purported case of misogyny: “Sometimes it’s a guy saying he doesn’t feel comfortable having sex at a sex party if there are women around.”

A gay man being more comfortable having sex with another man in the presence of men alone doesn’t prove a bias against women. I wouldn’t find a straight man saying, “Yeah, bro, I wanna fuck my girl without you around” to be wildly homophobic. Hell, I wouldn’t want a straight man watching me have sex either.

Again, something not for you doesn’t mean it’s discriminating against you.

In the end, if you are a straight woman in a gay male bar or club, you are a guest, therefore, have a bit of decorum. Show us respect by not commandeering our spaces and treating us like props. And if you can’t do this, leave, get out. That isn’t misogynistic; it’s calling on people to have some manners.

“Thots & Thoughts” is a column in which musings on dating, sex, race, religion, and politics all come togetherfrom a bird’s-eye view.