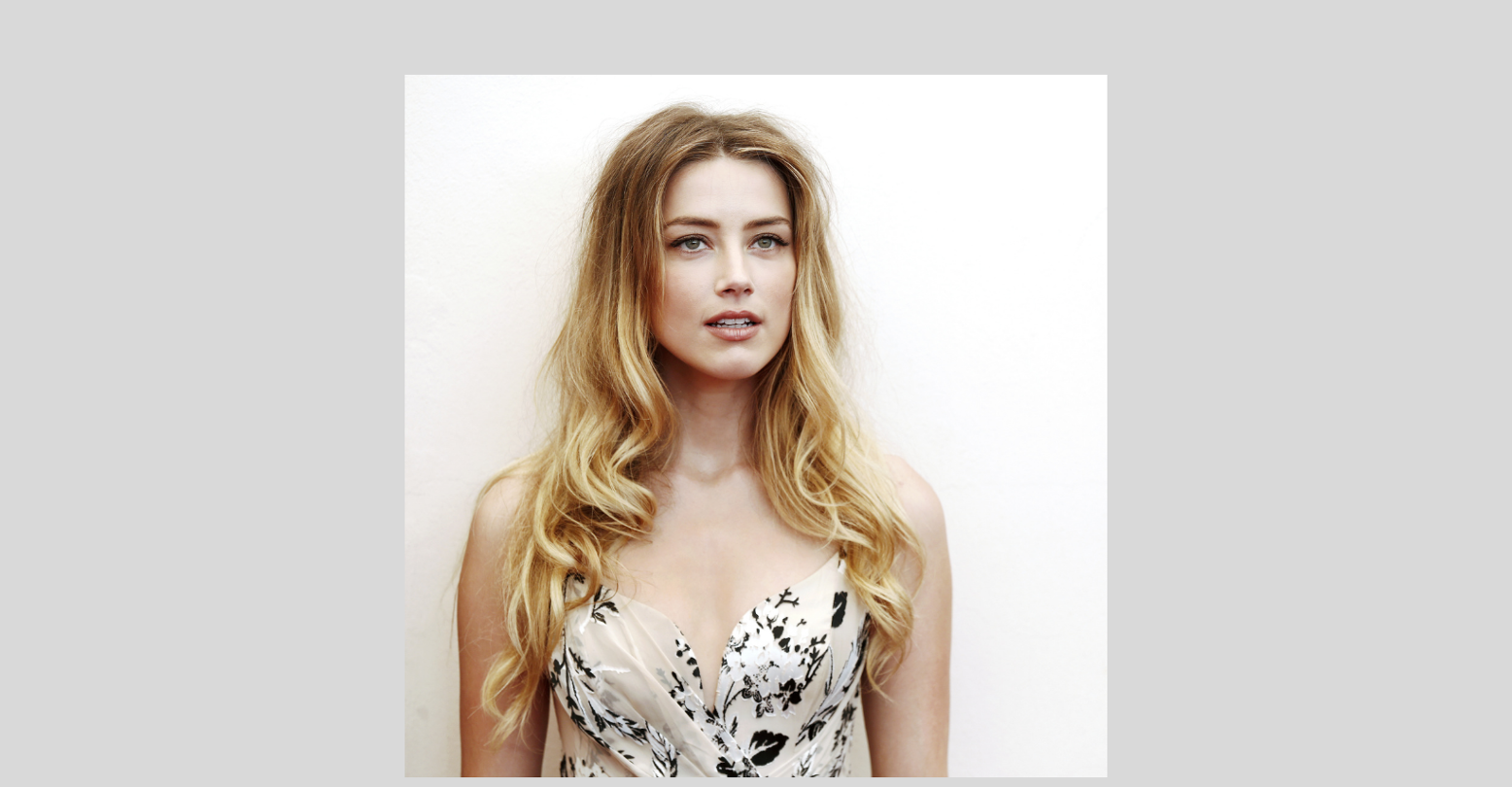 In 2010, a 24-year-old actress named Amber Heard made an appearance at an event in Los Angeles celebrating GLAAD’s 25th anniversary. As she traversed the LGBTQ+ organization’s blue carpet, her then-partner, the photographer Tasya Van Ree, lingered at the runway’s end, supportive yet apprehensive of all the attention. “I didn’t come out. I was never in,” Heard would tell Allure readers in a 2017 cover story. But GLAAD’s soirée marked her first time owning the obvious. Heard’s appearance served as a debut; an invitation for queer women to look at her, a woman over whom pubescent boys had previously staked ownership. So I, and a number of others, did. I now question whether we looked closely enough.

In coverage of the gala, queer journalists seemed a bit mystified by the twenty-something blonde in a red cocktail dress who’d vaporized onto the step-and-repeat. A reporter from AfterEllen awkwardly declared that it was great that Heard didn’t have to come with a beard. Her beauty and relative obscurity were unsettling, but also exciting: a breath of fresh air in a queer entertainment landscape then asphyxiating on Ellen Degeneres and the kids from Glee. “As you may know, hot blonde lesbians who look good in bathing suits are our best representatives in the fight for equality,” Marie Lyn Bernard joked at Autostraddle.

Her beauty and relative obscurity were unsettling, but also exciting: a breath of fresh air in a queer entertainment landscape then asphyxiating on Ellen Degeneres and the kids from Glee.

The question wasn’t whether a lesbian reporter could be photographed with Heard for bragging rights, but the basis of those bragging rights: Who, exactly, was Amber Heard? It wasn’t without reason; queers in smart suits who enjoyed a Ketel One open bar weren’t exactly the type to race to see Friday Night Lights or Pineapple Express, two successful — if not flagrantly heterosexual — films in which Heard had starred in the early 2000s.

In GLAAD’s invitations to members of the LGBT press, Heard was matter-of-factly billed as “the openly-lesbian actress starring with Johnny Depp in [The] Rum Diary and Nicholas Cage in Drive Angry 3D.” The tidy, publicist-crafted biography was no match for the fluidity of a twenty-something’s identity, let alone the storied messiness of queer people: Heard, now thirty-six, had actually fallen for Depp while filming The Rum Diary in Puerto Rico one year earlier. Together, they would soon embark upon an uneven relationship that would lead to a more lopsided marriage. It would precipitate domestic violence, tabloid vulturism, two highly publicized trials, and one career — Heard’s — left in shambles.

Though this short biography aged poorly, it did get one thing right: Amber Heard’s career in Hollywood was being defined not by her own abilities, but by her ability to affirm the sex appeal of veteran male performers. A decade ago, I experienced phantom limb syndrome when encountering the enthusiasm about Heard. Yes, she was stunning. Yes, she was a plucky young thing who’d grown up hunting and fishing with her daddy outside of Austin, Texas. Yes, she was effortlessly open, and was an incredible muse for Van Ree’s homoerotic art. But the qualities that made, and continue to make Heard worthy of casting — her coolness, her sense of freedom, her rural ruddiness, her easy appreciation for other women — had been neglected in the bit parts she’d been awarded on screen.

I realized that the best way to support her — if that was even possible — would be to take her work seriously.

I could not bring myself to view those movies; watching her play a high schooler in love with Seth Rogen in Pineapple Express was sure to result in disenchantment, and I did not want to lose sight of what her career might become. Instead, I imagined the leading roles she stood to be cast in one day: a well-financed neo-noir where she plays a contemporary answer to Basic Instinct’s Catherine Tramell; an unhinged provincial family drama like August: Osage County; a queer period film where she confidentially enters a discrete lesbian bar in 1950, discomforting and arousing its patrons as the mere mention of her name now does American popular culture.

This year, my resolve improved. As Depp’s fanboys and fangirls crawled from the woodwork to defend their hero as he held court in Virginia to contest Heard’s accusations of domestic abuse, I realized that the best way to support her — if that was even possible — would be to ignore the catcalls of “Amber Turd” and “liar” and take her work seriously. Maybe, I reasoned, finally watching her films was a better option than watching the courtroom livestream of her evisceration, or the supplementary chat room where participants took potshots at Heard with rapid speed. At a moment when she was gaining infamy as the ex-wife who allegedly defecated in Depp’s bed, I felt the need to know her as something else: as a performer and worker.

While probing Amber Heard’s filmography, I found less of a room of one’s own than a house of cinema horrors: its walls tell the story of raw ingénue talent that went unfostered, a lack of imagination, and a Hollywood that was nowhere close to self-interrogating its sexism.

Despite the dozens of films in which Heard has starred, there is remarkably little of her in them. More often than not, she is eclipsed in the shadows of men who are busy looking at Amber Heard. While watching Pineapple Express (2008) for the first time, I devised a system to zone out from Rogan and James Franco’s har-har-she’s-18-and-he’s-25 jokes. I simply waited for a young woman’s voice to emit from the television. And there she’d be, in “Sk8r Boi” era attire and rhetoric: yet another baby girl chronically strung out on by a man-child whom she wishes would love her right.

At a moment when she was gaining infamy as the ex-wife who allegedly defecated in Depp’s bed, I felt the need to know her as something else: as a performer and worker.

By the time Heard made her debut in 2004’s Friday Night Lights, male-fronted action-adventure films were dominating the box office, from The Bourne Supremacy to The Passion of the Christ. Just one year earlier in 2003, Depp had discovered his own franchise cash cow in Disney’s second-highest-grossing Pirates of the Caribbean: The Curse of the Black Pearl. Blockbuster dramas — and the unique audiences and roles for women that might’ve come with them — were nonexistent, if not unimaginable. Had she arrived in Los Angeles several years later, Heard might have found reliable work on a streaming show helmed by a newly-appointed #MeToo doyenne. As it is, things have shaken out quite differently. Though it might be a perfect opportunity for these individuals to step up to the plate and cast Heard in something worthwhile during this moment of modern-day blacklisting.

These indictments of the film industry are hardly new or revelatory. But they do point to how Heard, deeply desiring to work and looking like she does (irrationally hot), had few options than playing limited roles in underwhelming films, time and time again: that of the love interest without a thought in her head who greases the gears of a male protagonist’s journey; or, as in Mathew Cullen’s dreary adaptation of Martin Amis’ London Fields (2018), an equally uninspiring femme fatale. By simply going to work, Heard became unfairly calcified in the tropes of these roles.

“The legend goes if you say Amber Heard’s name THREE times, Mandy Lane will appear out of thin air and scare the heebeegeebees out of you!” a user in a Dallas Cowboys forum wrote in 2020. The quip nods to Amber’s first leading role, in the low-budget slasher All the Boys Love Mandy Lane (2008). In the film, she plays a drop-dead gorgeous high schooler who, unbeknownst to the boys who drool over her, intends to make them, well, drop dead. It’s no surprise that, over the course of Depp v. Heard, the actor’s most vocal defenders have behaved as though Heard has cyanide tablets and razors braided into her blonde hair; that the blunt force of her attractiveness must be synonymous with feminine deception, and that civil litigation must play out — frame by frame — as a middling film noir in which a younger woman has an older man wrapped around her little finger.

In recent years, Heard succeeded in clawing her way into a few roles that were generally memorable, including the well-written slasher Drive Angry (2011), where she spends much of her time in muscle cars blowing things up with her pal on the road, Nick Cage. A minor role as a bohemian lush in the otherwise humorless biopic The Danish Girl (2015) hinted at Heard’s aptitude for period farces; the very sort embraced by queer audiences, though still nonexistent in her filmography. Most notably, she found a career-stabilizing film franchise of her own: DC’s Aquaman. During her dispute with Depp, the actress’s role in a forthcoming Aquaman picture was considerably whittled down in light of her perceived indecency, and it remains to be seen whether she will continue playing the lively and independent Mera opposite Jason Momoa’s Arthur.

Over the course of Depp v. Heard, Depp’s most vocal defenders have behaved as though the blunt force of Heard’s attractiveness must be synonymous with feminine deception.

It adds insult to injury that the Heard mythology has also estranged her from a once-intrigued queer audience. Despite the steady stream of headlines including her name, it is harder to know who Amber Heard is than it has ever been, in large part because she has not been able to escape the untoward notoriety of having been Johnny Depp’s wife and alleged punching bag — even though their divorce was finalized six years ago. Her queerness has become cruelly illegible at a moment when naming it feels important, for both the future of her career and the statistical reality of her experiences: even the Center for Disease Control recognizes that bisexual women are at amplified risk for experiencing domestic violence. Heard’s problems are inevitably our problems, and the films she makes are inevitably ours, too.

It’s time to try to get to know her. Again.♦