Given how progressive The CW comic book shows have proven themselves to be when it comes to queer representation, it seems like superheroes might be working behind the scenes too.

Over the years, a number of diverse LGBTQ characters including Sara Lance and Anissa Pierce have taken lead roles in shows like Legends of Tomorrow and Black Lightning. This fall, all eyes were on The CW once again after they announced that Ruby Rose would play lesbian superhero Batwoman and that Nicole Maines would make history as the first trans superhero on TV.

Among these momentous developments, Arrow surprised fans by slipping in another win for LGBTQ representation this week during the second episode of Season 7, titled “Longbow Hunters.” Here, during one of the show’s new flash-forwards, Oliver Queen’s son, William (Ben Lewis), casually mentioned his ex-boyfriend while in conversation with Roy Harper, who’s played by the openly gay actor Colton Haynes.

Up until now, viewers have only known William as a young boy, so understandably, there’s been no indication of his sexuality thus far. What’s particularly commendable about this reveal was the lack of fanfare that surrounded it. This throw-away line about his ex was was surprisingly easy to miss and it’s heartening to see someone’s sexuality portrayed so naturally without being sensationalized in any way.

News outlets like Heroic Hollywood and Comicbook.com who picked up on this passing reference to William’s sexual identity were quick to describe the Arrow character as gay, but the truth is that his orientation remains unclear. While he may indeed turn out to be gay, these assumptions instantly erase the possibility that William could be bisexual, pansexual or even identify with another aspect of the LGBTQ spectrum.

It’s doubtful that such erasure was deliberate, but assuming William’s sexuality like this is yet another reminder that society often remains ignorant still when it comes to the complexity of queerness in all its forms. That’s no reflection on Arrow itself though, which handled William’s ‘coming out’ moment with remarkable sensitivity and respect. If only the same could be said for the portrayal of Oliver Queen’s son and his sexuality in the comics.

There’s no direct comic book counterpart to William Queen, but the original version of Oliver’s son first appeared in the pages of Green Arrow back in 1994. It was here that readers learned Connor Hawke had been raised by monks far away from Oliver in seclusion. Because of this, the comics established early on that Connor had encountered very few women in his life, so the fairer sex often baffled and confused him once he joined the outside world. Due to this lack of experience, readers and other characters alike started to speculate that the new Green Arrow was gay.

Connor himself openly questioned his sexuality, too, and it wasn’t long before he would become rather close with another hero called Kyle Rayner, prompting plenty of artwork and fan fiction that shipped the pair online. While Connor and the young Green Lantern never acted on their relationship in any physical way, the homoerotic nature of their friendship was clear to the majority of queer readers. 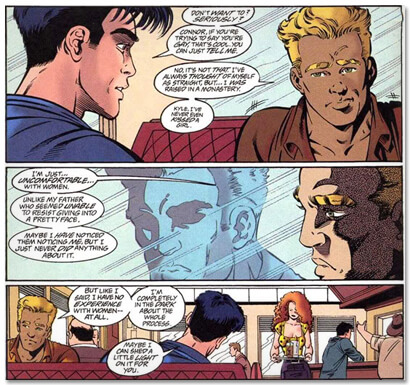 Queer fans didn’t have long to get green with envy though. Just a couple of years later, DC killed such speculation in a storyline where Connor lost his virginity to Lady Ren in the ghost city of W’eng Chun, because, comics. By retroactively making the young Green Arrow heterosexual, DC erased the obvious queerness of his character, depriving the LGBTQ community of yet another role model in the world of superheroes.

Flash forward to the latest flash-forward in Arrow and it becomes clear that much has changed, though. Back in the ’90s when William’s comic book counterpart was forced back into the closet before he could even finish coming out, it was hard to imagine an episode like this could ever air on TV, especially one handled with such nuance.

Whether William’s sexuality will be explored further on Arrow or not is currently up in the air. Perhaps the Arrowverse Connor Hawke from Star City 2046 could even return at some point too, providing the writers with a chance to rectify the mistakes that DC once made.

Either way though, the future of The CW’s superhero line-up continues to remain refreshingly queer. Let’s just hope that other networks and media outlets alike learn how to keep up and represent every letter in the LGBTQ spectrum too.

Arrow Season 7 airs every Monday night on The CW.