Despite doodling rhymes in the margins of her notebooks and freestyling for fun throughout her teenage years, it was only last year that Atlanta-born Bali Baby began officially recording and releasing music. Ever since that lightbulb moment – when she realized she was “actually fire” – came, Bali has been building a well-deserved reputation as one of the hardest workers in the game, releasing a slew of hard-hitting mixtapes and racking up millions of YouTube views and hundreds of thousands of social media followers in the process.

Arguably, the key to her musical success is her carefree approach; she admits to having written her entire first mixtape in one night, and prefers to freestyle in the studio before quickly developing those bars into viral hits. She also has genuine talent: her flow is playful, her lyrics savage, and her chosen beats laced with the trap stylings of Atlanta rap icons past and present. She describes her sound as “super ATL, but with a twist.”

Despite absorbing these influences from her home city’s iconic music scene, Bali also lists the likes of Beyoncé and Rihanna as the artists on her own playlists, which goes some way towards explaining the pop sensibilities, earworm rhymes, and arresting visuals that set her apart from her contemporaries. Ahead of the release of upcoming mixtape Playhouse Music, we reached out to Bali for an online chat about everything from her creative process to the pressures of social media and why she believes that ATL is truly – DJ Khaled voice – the best! 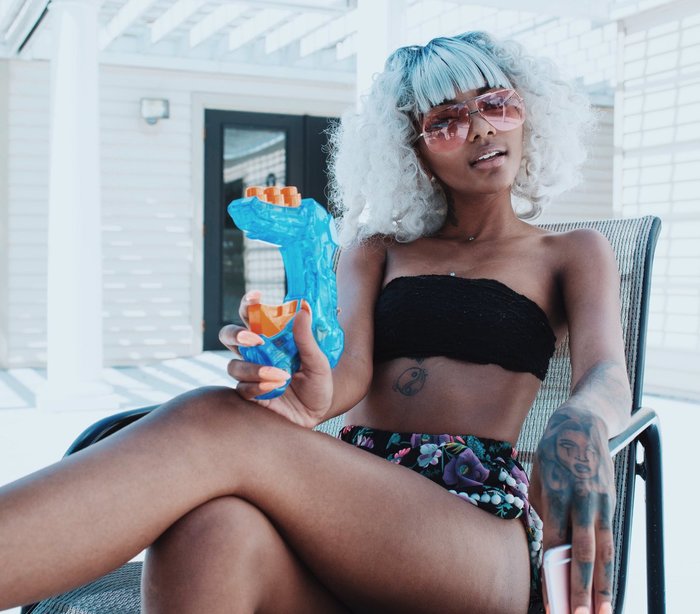 Tell us how you first got into rapping – was it something you had always wanted to do, or did it happen quite naturally?

Actually, I always wrote little rhymes in my notes but that was just for captions and stuff lmao! No, I didn’t ever think I was going to be rapping for real – I was actually just making fun of someone, and it turned out that I was actually fire!

What kind of stuff were you listening to growing up?

Growing up I actually listened to Lana Del Rey, Keyshia Cole, Beyoncé, Rihanna – a lot of singers. I love to hear people sing.

You’ve already released a crazy amount of music. Has your approach changed since you started?

Yes, a little, but mainly in terms of preparation and timing. Other than that, not really – I’ve always wanted to be in the studio all day long, and I still do.

Describe a day in the studio – how long does it usually take you to write and record a track?

Well, usually I freestyle. It will probably take me like 15, 20 minutes to freestyle a whole song with ad libs and all that. I work extremely fast, even when I write I can write a whole song in 5 to 10 minutes. I wrote my whole first mixtape in one night!

The response has been huge, and you’ve already had millions of views on YouTube alone. How does it feel to blow up like that, is there any pressure?

YES! There’s pressure, but pressure bust pipes lol Not for me, I work under pressure very well. It actually sometimes causes me to go even harder. It’s so cool to see the reaction I get though, especially in person – when people know me everywhere I go, it’s an amazing feeling.

Atlanta has an iconic rap scene – would you say you’ve been inspired by that?

ATL IS THE GREATEST!! We produce all the G.O.A.Ts (greatest of all time) in music, from rappers to singers to producers. I’ll put on my DJ Khaled voice and say ‘We the best!’ ATL influences me totally – I think I have a super ATL sound, but with a twist.

How has your approach to social media changed since your profile blew up? Do you find yourself being more careful about what you post?

This is definitely something I have to watch now. I can’t just tweet off or post just anything, because people have their eyes on me like a hawk. I could literally post something at 4am and delete it almost instantly, but still somebody will have screen-shotted it. So yes, I have to be very careful. Also, I have a huge influence, so I don’t want anyone to be doing something terrible because of me.

Tell us a little about Brazy Bali and Bubbles Bali – what made you want to explore that duality in two separate mixtapes?

Well, I really have two different sides to me and two different sounds that I wanted to try and distinguish for my fans. I had so much unreleased music with such different feels that I couldn’t really try and throw it all on one tape, so that’s when the dual tape release was born. Brazy is my wild side, Bubbles is the cute and girly side.

Who would be your dream collaborator?

ME + NICKI MINAJ + RIHANNA = PUSSY POWER! That song? Right there? CHARTS! I love them both – they are definitely so influential and smart, I adore them. We would make the hottest track of all time, I bet money on it.

What can we expect from you in the future?

Music, music, music! All heat dropping, and new videos – look out for my tape Playhouse Music! Oh yes, and expect me to be walking down a red carpet soon!