Drag has changed a lot since the development of social media. In addition to pageants and live performances, queens can now exist entirely behind screens. Famous queens like Aja and Kim Chi first had their rise on Instagram, while Trixie Mattel and Katya garnered success after Drag Race in their web series that’s now landed them a show on Viceland.

Another way of performing could be a queen streaming herself playing video games. But who would do that? Say hello to Hashtag Trashly the drag queen who performs on Twitch.

For those who aren’t huge nerds, Twitch is a platform where people can stream themselves playing different games live. Generally, the site’s most successful streamers are straight dudes who are just very good at games people watch to see their skill, maybe learn something for when they play the game. Trashly, however, can also be found on Twitch, playing games and cracking jokes while in drag.

In an email exchange, Trashly told me that she got started with drag by dressing up as female characters mostly Daenerys from Game of Thrones for a monthly cosplay event in Chicago. However, she soon realized that these monthly gatherings didn’t scratch her drag itch. “There are several opportunities to perform at open mic nights or drag competitions in the Chicago area (as well as other large cities I’m sure) but I work all day during the week and, at the time, I wasn’t too comfortable being up on stage in drag. I was really stressing out over it and procrastinating, but I knew I wanted to do something.” Trashly explained that it was after reading a quote from Amy Poehler’s book, Yes Please, that she gained the motivation to perform. Specifically, this quote: “You do it because the doing of it is the thing. The doing is the thing. The talking and worrying and thinking is not the thing.” So, Trashly decided to do the thing.

Starting off strong, one of Trashly’s first streams was a part of a 24-hour event that Twitch puts on every year to raise money for children’s hospitals. “My face became cratered with acne and I got permanent purple bags under my eyes, but I raised a bunch of cash for sick kids, so it’s all good!” Since then, Trashly has started her regular weekly streaming schedule. As Trashly puts it, streaming in drag has boosted her confidence in performing and her makeup skills have improved after having to practice regularly once a week.

Although her experience has been mostly positive, Trashly has also gotten harassed during her stream. “Having been a gamer most of my life, I knew when I started that I would be putting my-drag-self out in front of the same community that started Gamergateeven knowing this and having been called 47 different incarnations of fag, honestly, I was still shaken the first time it happened to me while streaming.”

If anyone wasn’t on Twitter in 2014, Gamergate is a movement that stemmed from some specific harassment against women in the gaming industry but has ended up evolving into a community of angry gamers who think their hobby is being ruined by diversity. Since 2014, the movement has created an ongoing feeling of tension for many women and queer people who enjoy games.

“I’m just surprised at the nerve of some people. Sure, in video games some get angry and say hurtful things, but in those cases, we were put randomly together on the same team. This was someone coming into my space and telling me to ‘kill ur self u disgusting pig fkn stupid ugly creature’ so it just felt so pointed.”

More often than the harassment, Trashly actually gets many confused responses from her audience. She explained that something else that surprised her was that a lot of people don’t actually know what drag is. Often times, viewers will assume that she’s just trans. On the inverse, other drag queens seem to be confused about streaming, “Some people think I’m like internet famousa lot of them think I’m also making money off of it.” 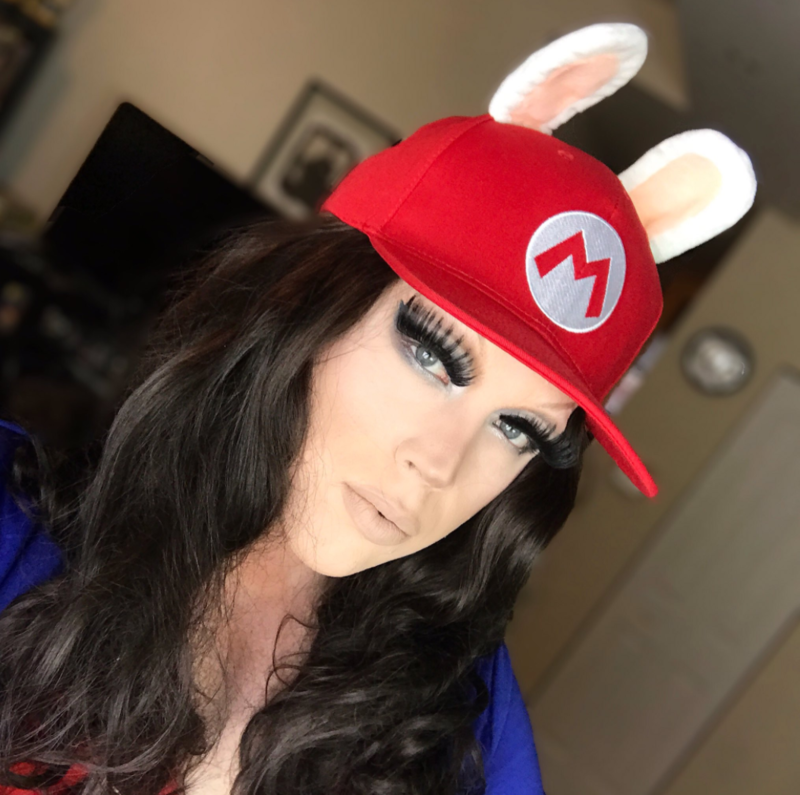 It seems that Trashly and her streams exist in a kind of limbo not really understood by the drag community, nor the streaming world. Luckily, there are some people who understand both sides of Trashly. She has some regulars who come to her stream and also loveDrag Race. “One of my favorites is a trans woman living in Mexico who loves urban exploring. How else would I get to meet such an interesting individual?”

In the future, Trashly is hoping to continue meeting interesting people and expanding her work, specifically engaging with gaming and drag in more ways such as hosting a weekly board game night, “the most I do right now is occasionally go to the local gay arcade bar in drag and repeatedly lose playing Marvel vs Capcom.”

Perhaps the coolest part of Trashly’s story is that it serves as an example for how any queer person can make space for themselves in a community that isn’t made for them.
“I like to think that by showing my extremely gay face and by gaming in drag, I’m setting an example for all of the weirdo gaymers out there that they can be themselves as loudly as they would like.” Being queer can be hard when it comes to enjoying media or having hobbies, most things aren’t designed for you in mind. Often times you have to put up with a lot of shit, just to enjoy something you love. However, thanks to the work of people like Trashly, the space for queer gamers is becoming a bit more accessible.