More than 60 legislators have signed onto an Egyptian law that would criminalize both homosexuality and pro-gay advocacy amidst a harsh crackdown on LGBTQ life.

Riad Abdel Sattar, a minister in the Egyptian Parliament with the Free Egyptians Party, is pushing legislation that would punish same-sex behavior with up to 15 years in prison. Amnesty International reports that Abdel Sattar collected 67 signatures from fellow parliamentarians to ensure their support.

The human rights group believes the bill would be disastrous for LGBTQ people in Egypt.

“This deeply discriminatory bill would be a huge setback for human rights and another nail in the coffin for sexual rights in Egypt,” says Najia Bounaim, Amnesty’s North Africa campaigns director.

The Alliance of Queer Egyptian Organizations (AQEO) tells INTO that Abdel Sattar’s bill is just one of a number put forward amidst this unprecedented wave of attacks on LGBTQ Egyptians.

Shadia Mahmoud Thabit, an independent minister of parliament, introduced a bill on Oct. 14 that would serve to update the debauchery law. The legislation, if passed, would mandate criminal prosecutions of up to seven years in prison for “soliciting sedition or prostitution on social media sites.”

Thabit’s legislation is much more vague on the subject of homosexuality than the Abdel Sattar bill. But a coordinator with the Alliance claims that the implicit meaning of the law is clear to Egyptian legislators.

“I have never seen any cases of people targeted by this law than prostitutes, homosexual males, and transgender women,” the representative claimed.

It took two years to pass a May 2017 law curtailing the freedoms of civil society, one which hobbled the ability of nongovernmental organizations to operate openly. Advocates believe that the anti-LGBTQ bill could take just as long to pass. But it’s well-positioned to gain wide support in Parliamentary: Abdel Sattar’s party is the largest in the unicameral legislature, claiming 65 of the 351 seats. 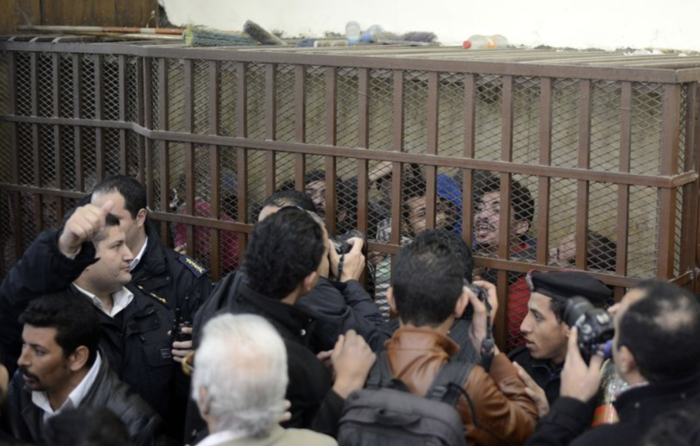 The specifics of the Abdel Sattar law are nearly unrivaled in their extremity. The bill combines the worst aspects of state anti-sodomy codes with Russia’s anti-gay propaganda law, which forbids the spread of information on “non-traditional sexual relationships” to minors.

The legislation, if put into effect, would target any venue that hosts a pro-LGBTQ event, any media outlet viewed as “promoting” homosexuality through positive coverage of the community, or any individual caught in possession of symbols associated with queer or trans people. A public display of pro-gay support is punishable by up to three years in prison.

It also decrees that the names of those who violate the law be printed in newspapers, outing them to their friends, families, and communities.

“Not only does this draft law propose to criminalize same-sex sexual relations,” says Bounaim, “it is also intended to fuel stigma, humiliation and hatred against people based on their real or perceived sexual orientation.”

Even worse, the bill would systematize the recent raids on queer and trans peoplemaking anti-LGBTQ violence into the new normal.

“During this crackdown, there was nothing in that clearly [forbids homosexuality], but now the law is clear,” the Alliance claims. “This gives more power and more authority to police officers to target people even just for posting on Facebook. It will give more power to authorities to arrest people for anything.”

But there is some small reason for hope, advocates say.

A majority of those arrested following the Mashrou’ Leila show were released, and many have had their prison terms reduced upon appeal. Initial rulings were harsh, mandating sentences of up to six years behind bars. The charges were scaled down to three years at most.

In addition, LGBTQ advocates believe that the draft law is “unconstitutional” and plan to immediately challenge it in Egypt’s Supreme Constitutional Court. The country’s constitution clearly forbids “discrimination against citizens,” claims the Alliance. The LGBTQ group also explains that the constitutional codes offer protections based on “free speech” and the “privacy of citizens.”

The trouble is that many of the current laws which remain on the books in Egypt are also unconstitutional, including the debauchery law. But the Alliance says that because Abdel Sattar’s bill has no legal standing, advocates have the ability to start a conversation on the anti-LGBTQ persecution, no matter the outcome.

“When a law isn’t constitutional, it allows lawyers to raise the issue to the high court,” the advocacy organization says. “It gives a space to legal action.”

U.S. advocacy groups have called on the White House to take action, lobbying Secretary of State Rex Tillerson to condemn the anti-LGBTQ legislation prior to its adoption. When asked if he would come out against the law, French President Emmanuel Macron stated that he “won’t lecture” Egypt on human rights.