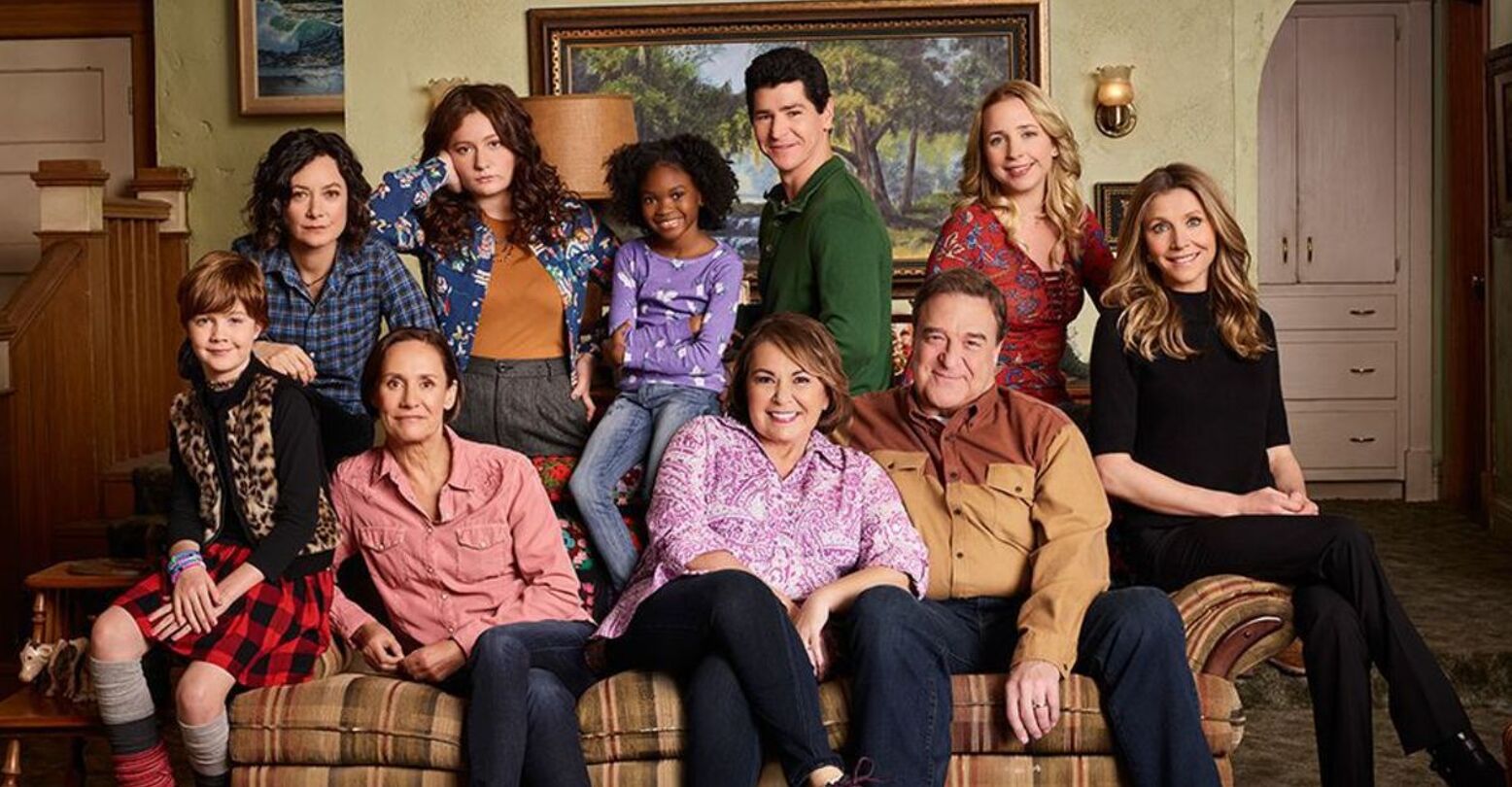 From Full House to the Gilmore Girls to Will & Grace, Americans seem to need the comfort old television favorites provide in such uncertain and scary times. On March 27, one of the most-beloved sitcoms of the 1980s and 1990s, Roseanne, will return to ABC, but fans are perhaps even more trepidatious about this reboot than others.

Before Will & Grace, Roseanne was a beacon of LGBTQ representation. Barr went out on a limb for queer folks, and she didn’t have to. Not only did she not have to, it was a risk to. Roseanne hadand still does, I’m assuminga gay brother and sister, so this was personal.

On her show, Barr showed queer people just being themselves. It was that simple and that radical. Roseanne had a bisexual friend (played by Sandra Bernhard, a regular on Seasons 4-10) and a gay boss, Leon (Martin Mull), who married his partner on an episode called “December Bride” in 1995. Roseanne’s mother (Estelle Parsons) turned out to be a lesbian towards the series’ end. Then there was Darlene who, despite being straight, pinged left, right, and center. (Sara Gilbert was not out during the show, but eventually told the world she was a lesbian.) And in 1994 there was, of course, that famous lesbian kiss with Mariel Hemingway.

Two stations refused to carry the episode (“Don’t Ask, Don’t Tell”), and at some point, there was doubt that it could even be aired.

“The folks at ABC really went to bat for us with the corporate people who didn’t want to air the episode, and I will never forget them for that,” Tom Arnold, show star and then husband of Barr, said at the time.

Just for context, it would be another three years before Ellen would come on network television.

Beyond just being a light in the dark for queer folks, Roseanne created space for women (especially plus-sized women and mothers), Jews, Midwesteners, and working-class folks of all stripes. Unlike other on-screen moms, Roseanne was not syrupy sweet with everything under control. She was the mother who, out of sheer frustration, suggested her bratty daughter Darlene bang her head against a table. She was the mother who threw her kids’ clothes out on the porch because she was so disgusted with the way they were acting. And she gave other mothers permission to do the same.

“Roseanne Conner was a sharp contrast to the stereotypical TV housewife in the mold of Leave It to Beaver’s June Cleaver and The Brady Bunch’s Carol Brady,” the History Channel noted.

She was also a role model for anyone who wanted to make it in show business but didn’t look the part. She proved talent alone could elevate you. Inspiring? Try life-changing.

Now zoom ahead to today.

Barr is one of those public figures who says what she wants to, which was part of her early appeal as a comic and, eventually, a television star. But what she has revealed about herself on Twitter in the last few years is not funny or gossipyit’s hate speech, pure and simple. 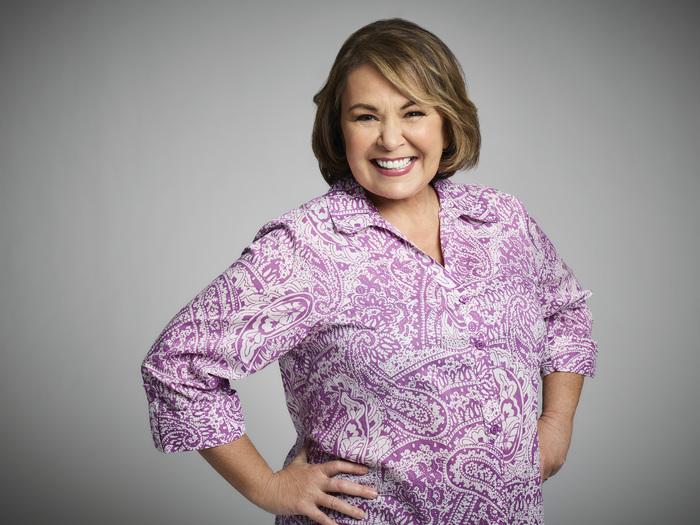 Three years ago, Barr tweeted “TERF IS A SEXIST SLUR AGAINST WOMEN.” She linked to an article that said, “We also take issue with the construction of sex and gender as legally interchangeable.”

A few years before that tweet, Barr tweeted “I’m sorry , but a dick means ur a man to me.”

How charming. How transphobic.

You could say that Roseanne is just a show and that she’ll leave the politics at home, but you’d be wrong. She’s making the Conners Trump supporters, just like she is.

“I said, and I’ll say it again, my show has always been I have always attempted to portray a realistic portrait of the American people and of working class, you know working class people,” Barr told reporters at the Television Critics Association Press Tour yesterday. “And, in fact, it was working class people who elected Trump. So I felt that, yeah, that was very real, and something that needed to be discussed. And especially about polarization in the family, and people actually hating other people for the way they voted, which I feel is not American. And so I wanted to bring it right down the middle, and we did.”

She says it is “realistic,” but is it? Would this loving family support a racist, homophobic, anti-woman president? The Conners were not perfect, but you never doubted this was a loving family, loving enough to teach their kids right from wrong.

“I think this is a time, as we all know, where our country is very divided,” Gilbert said at TCA. “And we did have a wonderful opportunity to talk about this in the context of a family, and I think part of what’s going on is that people feel like they can’t disagree and still love each other or still talk to each other. So, to me, it was a great opportunity to have a family that can be divided by politics, but still is filled with love. And what a great thing to bring into this country right now.”

In some ways, the show (whose Executive Producers include Barr and Gilbert as well as Tom Werner, Bruce Helford, and Whitney Cummings), seems to be trying to play nice. A picture released from the new show of Jackie with a pink pussy hat shows us one character has her head on kind of straight, but there is also the anti-transness of the Nasty Woman hat to consider. And there is Marknot Mark, Becky’s boyfriend, played by Glenn Quinn, who unfortunately died young of a drug overdoseDarlene’s 9-year-old who has been described as “gender-creative.” 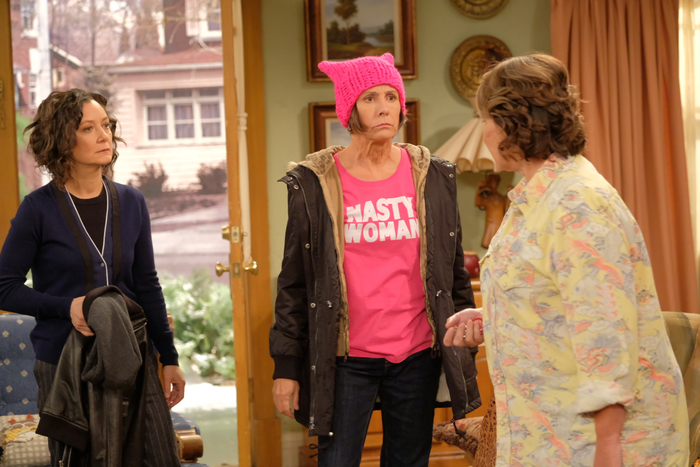 “He’s not a transgender character. He’s a little boy,” Gilbert told EW. “He’s based on a few kids in my life that are boys who dress in more traditionally feminine clothing. He’s too young to be gay and he doesn’t identify as transgender, but he just likes wearing that kind of clothing and that’s where he is at this point in his life.”

Saying her son is “too young” to know his sexuality is a dangerous comment from someone who should know better, but what’s more worrisome is the kind of commentary that Roseanne herself might have when it comes to this character, and what the writers will do with him, considering Gilbert is likely the only LGBTQ person in the writers’ room or with any influence on the reboot’s LGBTQ storylines. 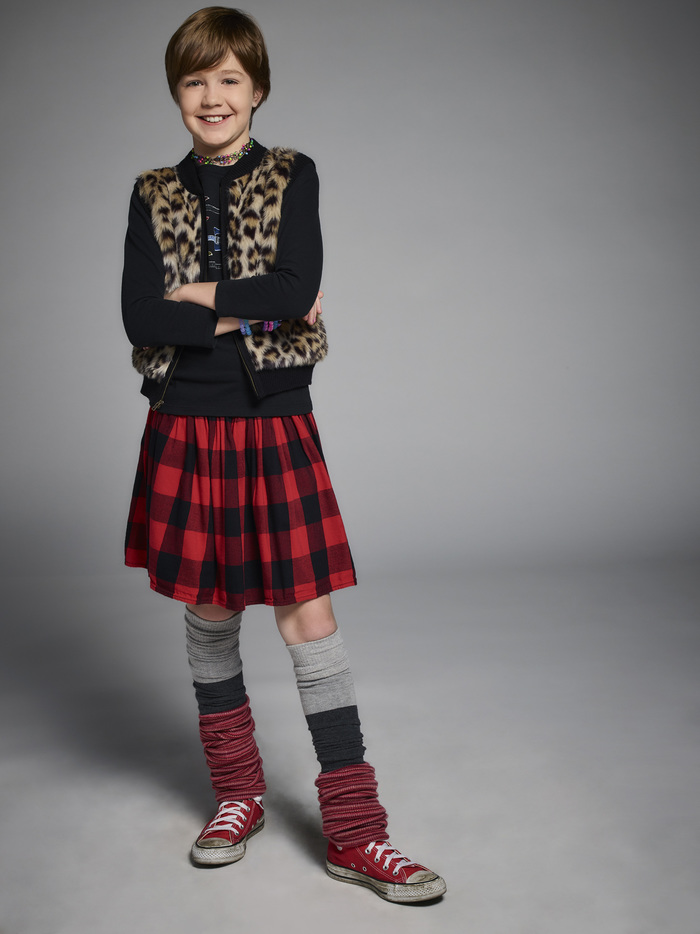 Barr and her comments have riled up folks even though the show is still more than two months away. Michael Fishman, who plays D.J., has come to the star’s defense.

Since 1988 @RoseanneOnABC has been ground breaking, inclusive, and honest.

I grew up among forward thinking advocates for rights & equality. In the most diverse environment, merit was rewarded, but laughter with integrity was #1
(Part1)

I’m proud of working on #Roseanne both times. We are an inclusive show on and off camera. I believe if you give the show a chance you’ll agree. We want to bring families together.

Thank you to every who tunes in.
(Part 2)

Today, ABC is the home to some of the most progressive sitcoms that shake up values in a way that Roseanne did in its dayModern Family and Black-ish. But in bringing back Roseanne in what appears to be a less progressive way than the groundbreaking original, ABC is supporting and giving a platform to some dangerous ideals.

“I think you see in Roseanne’s character in the revival that she has a slightly different outlook,” Laurie Metcalf said at TCA.

Look, revivals are risky. It’s hard to go home again. Full House and The Gilmore Girls were, for me, disappointing. Will & Grace, less so. Roseanne, I believe, had the chance to be as good as it was back when it premiered. But we can’t let our warm fuzzy memories of who Roseanne Conner was interfere with the person Roseanne Barr is today, a person I suspect Roseanne Conner wouldn’t much care for at all.