When we were kids, a massive snowfall meant we got to miss school and go make snowmen or something else that happens in Norman Rockwell paintings. As adults, they’re kind of a bummer. If we’re lucky, we get to work from home. But mostly, we’re just fearing the impending doom of climate change.

Luckily, Twitter is here to hold us over until the end of the world. As long as there are Game of Thrones memes or whatever’s topical for the moment, no blizzard can keep a New Yorker down. Not even Winter Storm Grayson, or the “bomb cyclone” as it’s so pleasantly been dubbed.

One weatherman whipped out his huge innuendo to get us all hot bothered, regardless of the plummeting temperature. 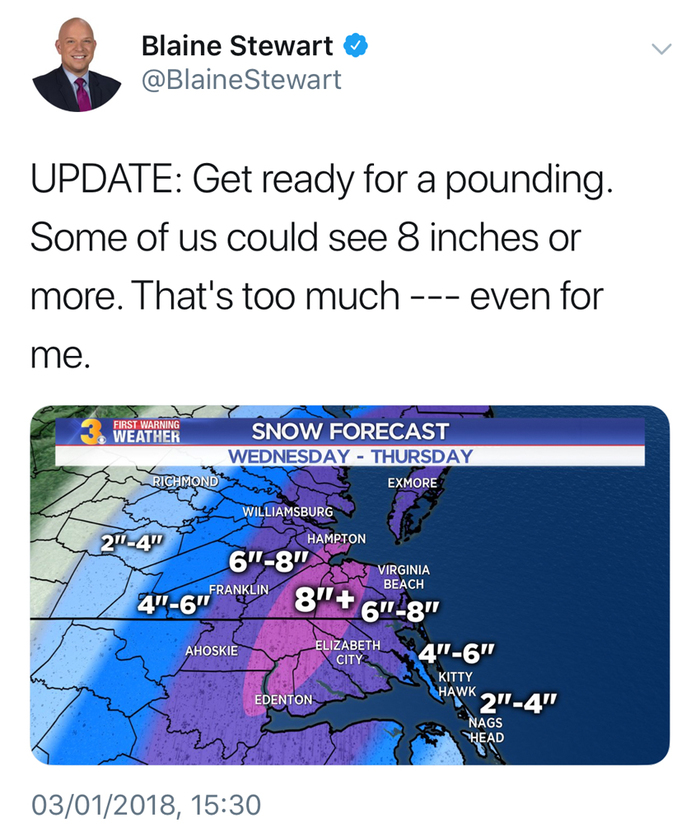 Plenty of other gay and gay-adjacent Twitter users have taken to social media to express their emotions about Grayson. It gives us something to scroll through as we await frostbite.

When I’m supposed to be back from vacation the day a “Bomb Cyclone” hits pic.twitter.com/UHC8HprONq

What a bunch of snowflakes. https://t.co/t8mAjOPKJT

In case you didn’t know, it’s snowing in Boston.

Match Quote w/Movie: “If there’s a snowstorm tonight, he’s going on my tires”

I would go to Coachella if the bomb cyclone was playing. Shorts suck!

Winter Storm Grayson appears to be turning away from the East Coast, possibly because it can’t compete with the shit-storm in Washington.

Why does Winter Storm Grayson sound like someone who would take away your healthcare & your voting rights, then rank your attractiveness?

#BombCyclone in Trump’s mind: This has been the most successful snowstorm in history. Totals are not only the highest but it’s the most luxurious snow ever. They are saying it’s all bc of Trump. I wonder if the East Coast will thank me for defeating global warming. Sad!

What is all this #BombCyclone talk? Anybody in New England knows what it’s really called — a #NOREASTAH!

The satellite imagery of this storm is cray. Are people still saying “cray?” I don’t care…. this is cray.#BombCyclone pic.twitter.com/EWazcV5KJZ