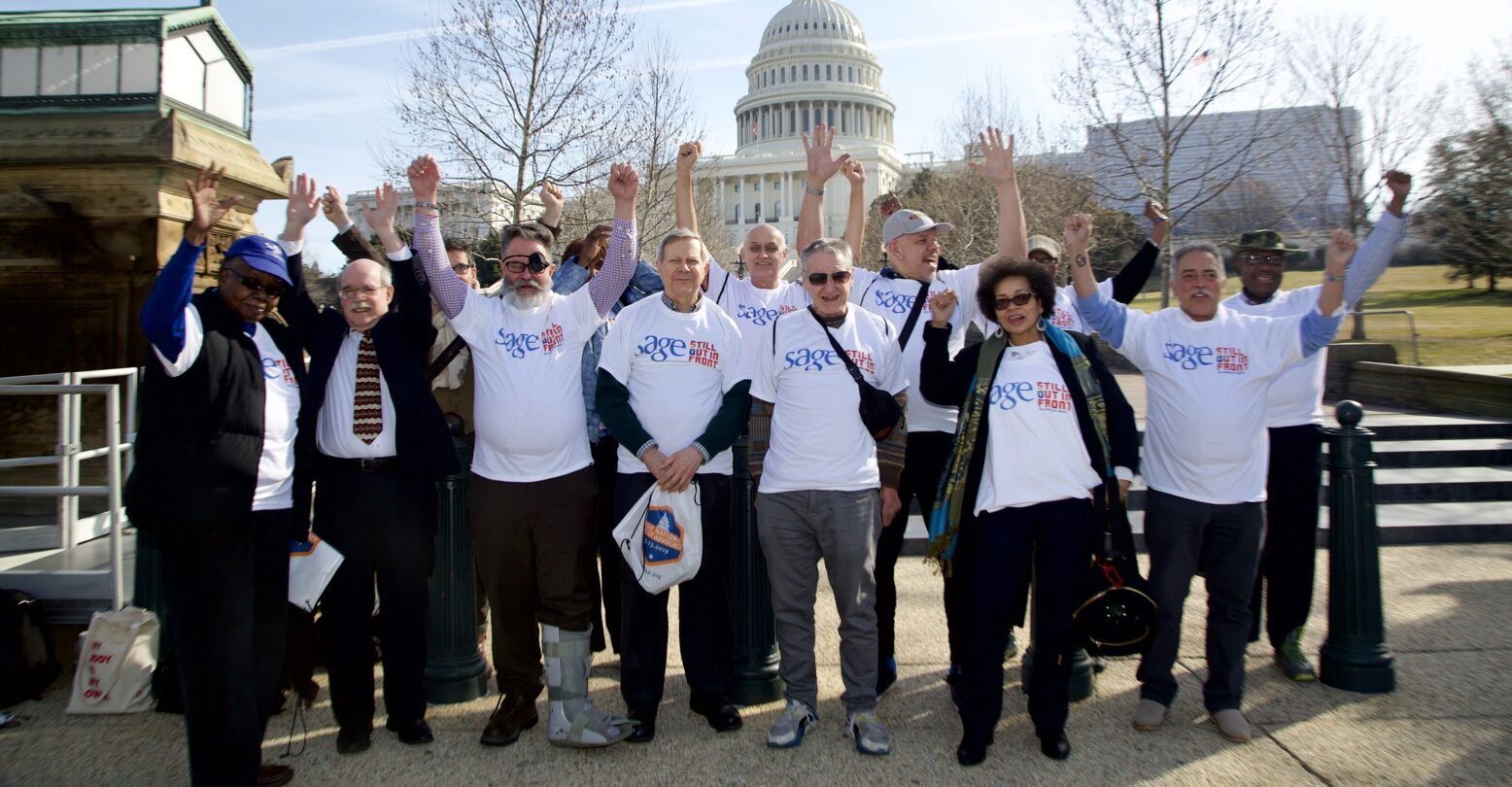 American culture has always privileged the young and the straight. So what happens when you don’t fit into either category? Society tries to leave you behind.

Enter SAGE, an organization dedicated to supporting and advocating for LGBTQ+ elders.

“SAGE is the nation’s largest and, ironically, oldest organization dedicated to improving the lives of LGBT older people,” says Aaron Tax, director of advocacy at SAGE. “I lead our policy work, where we aim to make sure that our federal aging policies are LGBT inclusive, and that our fight for LGBT rights is inclusive of the needs of LGBT older folks.”

Since its founding in 1978, SAGE has been creating an in-person network of LGBTQ+ elders in its homebase of New York City. SAGE member Alston Green, 70, appreciates having a way to connect with other LGBTQ+ people in his age group.

“It really, really offers a wonderful opportunity for us to have remembrance about who we are and where we are as a people in our demographic,” he says. “Now that I am a part of a family, it just only fortifies and encourages my activism to educate younger people. I mean, that’s something that I really, really embrace, being able to be at that point where I am, quote-unquote, a sage!”

While Green is happy to give back to his community, he also values SAGE’s support as he navigates the world as an LGBTQ+ elder.

“Needless to say, we have been a demographic that has been discriminated against, and it’s a whole different ball game now that we’re all seniors,” he says.

Indeed, life as a senior citizen in America is no walk in the park, and it’s only made more difficult by the challenges of being LGBTQ+.

“We have been a demographic that has been discriminated against, and it’s a whole different ball game now that we’re all seniors,”

“In a nutshell, LGBT folks may face many of the same challenges that other older people face, but often in a more pronounced way,” says Tax.

LGBTQ+ seniors are also more likely to have experience stigma and discrimination throughout their lives, leading to higher rates of poverty in old age. And the problems don’t stop there.

“One of the biggest issues that impacts older LGBTQ people is housing and health care,” says Green.

On the housing front, 48% of gay couples experience discrimination when seeking senior housing, and trans people fare even worse. And in terms of health care, LGBTQ+ elders experience mental and physical illness more frequently than cishet folks, and when they do get treatment, they can face abuse from doctors: 9% of lesbian, gay, bisexual and queer people report that a health care provider has used discriminatory language while treating them. 21% of trans people report the same.

“The other big category that we talk about is the lack of access to culturally competent services and supports,” says Tax. “That’s probably the heart of this conversation.”

By cultural competency, Tax means that resources for seniors are often unintentionally discriminatory. For example, requiring marital status or binary gender on intake forms for senior centers can alienate LGBTQ+ elders from pursuing those services.

“On the flip side of that, there might be LGBT-serving organizations that are not necessarily in tune with the needs of LGBT older people,” says Tax.

Many LGBTQ+ organizations cater to younger people, not accounting for cultural differences. For instance, groups using language like “queer,” only recently reclaimed from being a slur, can turn away older generations.

All this means that LGBTQ+ elders can be left adrift: too gay for other seniors, too senior for other gays. That’s why an organization like SAGE that specifically meets the needs of LGBTQ+ older people is so important.

“We’re the first group of LGBTQ people to age, to really age,” says Green. “You really find yourself on your own, and you’re left to your own devices. And so it really is important to have organizations that can help you navigate through the system for the aging population, because, oh, it’s daunting, let me tell you.”

All this means that LGBTQ+ elders can be left adrift: too gay for other seniors, too senior for other gays.

Now, SAGE sees a chance to score a major win for LGBTQ+ seniors.

In March, the Biden administration released the American Jobs Plan, an outline of how President Joe Biden plans to revitalize the nation’s industries, economy and job market. One section of the plan details how Biden will “solidify the infrastructure of our care economy,” specifically by calling on Congress to put “$400 billion toward expanding access to quality, affordable home- or community-based care for aging relatives and people with disabilities.”

A higher budget for the care economy is always a plus, but SAGE wants to guarantee that LGBTQ+ seniors can feel that boost, too.

“We look at this as an opportunity for a rising tide to lift all boats, and we want to make sure that LGBT older people are not left behind in the infrastructure bill,” says Tax. “In order to do so, we need to make sure that some of the money is dedicated to ensuring that LGBT older folks have the very same access that other people have to these critical aging services and supports.”

That’s why SAGE is proposing that the Biden administration specifically allocates $50 million to supporting LGBTQ+ elders. It’s doing so as part of the Diverse Elders Coalition, a group of six senior advocacy organizations dedicated to various underrepresented elder minorities, which is asking for $400 million in total for the many communities it represents.

“We are heartened by the Biden administration’s language and that they speak about their dedication to diversity and equity,” says Tax. “We certainly hope that they will lead on this issue, ensuring that the American Jobs Plan is meeting the needs of all Americans, including LGBT older people.”

Even while SAGE advocates on the legal front, it continues to provide much-needed community to LGBTQ+ elders, both at home in New York and nationwide through its SAGEConnect program, which links LGBTQ+ seniors with volunteers for weekly phone or video calls for company, friendship and connection.

This is only the tip of the iceberg of SAGE’s constant efforts to make America a more welcoming place for LGBTQ+ older people, and their work won’t stop at the American Jobs Plan, says Tax.

“The goal at the end of the day is to ensure that LGBT older folks are really put on a level playing field with everybody else.”