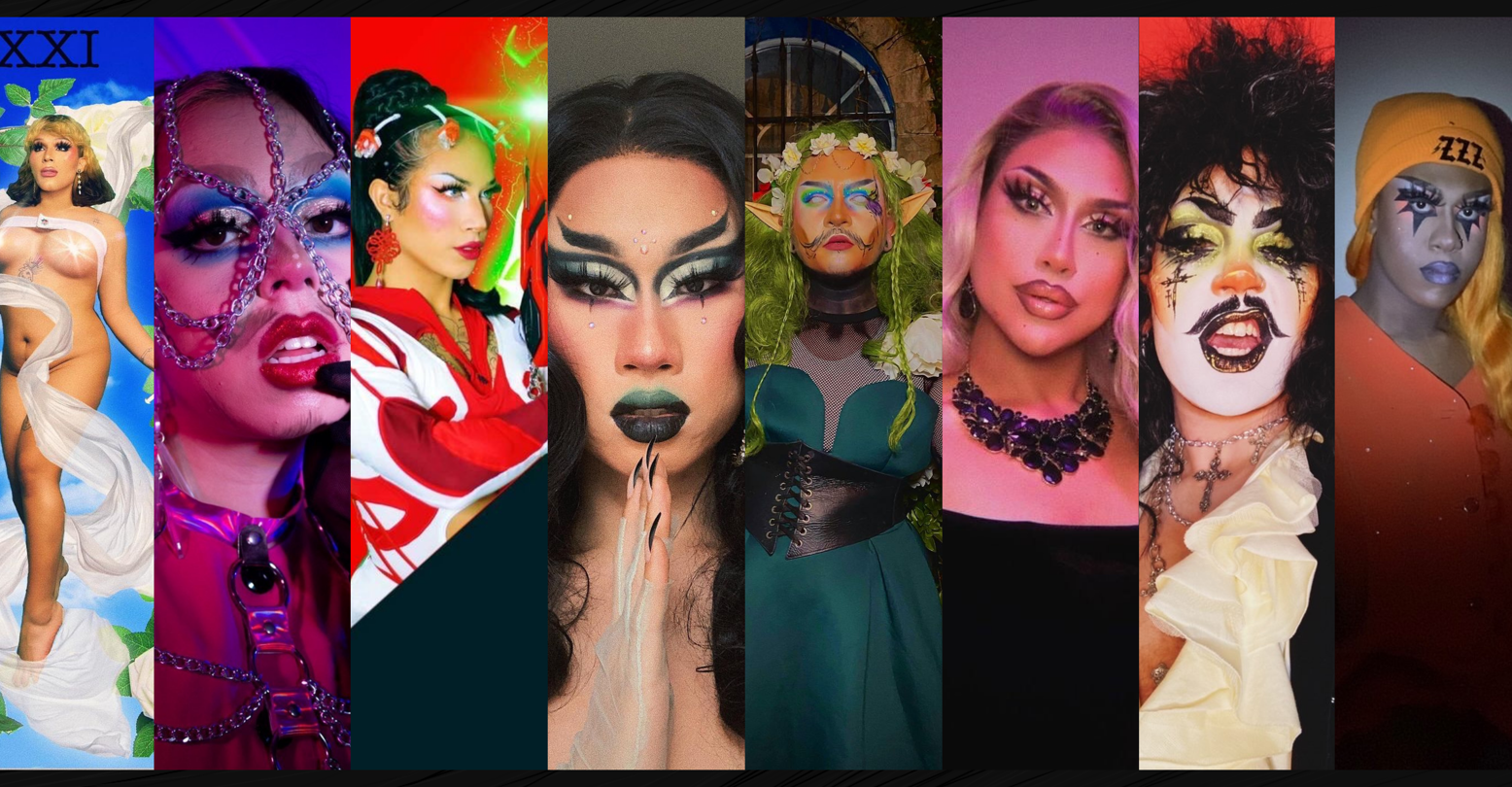 Four years into her drag career, Bibi Discoteca (@bibidiscoteca) caught her reflection in a mirror at a club. And something clicked.

It was the beginning of Bibi discovering her trans identity. Bibi, who uses she/they pronouns and is based in Los Angeles, is one of many transgender drag artists who use drag to explore their gender, use their gender to explore drag, and who carry on the long legacy of trans people as the originators of the art form. All across America, trans drag artists are showing why drag always has been and always will be by and for trans people.

The Hudson Valley is home to a troupe of bizarre drag artists known as the Haus of Peculiar. Among its members are two drag kings who share not just just a drag haus, but a physical house: ShowPonii (@showponii ) and MAUVE are roommates as well as frequent collaborators.

For ShowPonii, his out-of-the-box drag was a way to comfortably explore femininity within his identity as a trans man.

“Everything that I saw about trans men was always like, ‘You’re masculine, you have to be very masculine.’ But I was like, ‘I’m not masculine!’” he says. “I thought I had to be very binary, but drag allowed me to explore that in a healthy way.”

MAUVE (@mauve_over) had a similar journey: embodying masculinity through drag helped him be comfortable identifying as a trans man in everyday life.

“Drag has always been, I think, for me, a space to rehearse my identity before I got to live it in real life,” he says. “So I got to practice, I got to try it out. I got to see if it fit. And it did.”

Irregular Girl’s (@imirregulargirl) drag is all about envisioning and embodying trans utopias.

“I think that my drag really centers my experience as a trans person, and as a person of color,” she says. “My drag tends to be about freedom and wish fulfillment.”

Irregular Girl says that Chicago’s drag scene is home to a plethora of outstanding trans and nonbinary drag artists (herself included). She’s extremely grateful for all the love she and her drag have received from the city.

“It’s really freeing to see that the choices that I’m making are choices that people are appreciating and responding to. Because I think that sometimes it’s scary, right? It’s scary to make work about yourself. It’s scary to put yourself out there and to risk failure,” she says. “That is the number one thing that has been so paralyzing to me throughout my journey as a trans woman. In the beginning, it was like, ‘What if I don’t pass? What if I don’t look good? What if I’m ugly? What if I hate it? What if I wanna go back?’ And at one point in my journey, I just said, ‘Fuck it, I’m gonna land at what I’m gonna land at, and I’m gonna love the ride.’”

For Damien, exploring gender through drag unlocks confidence and power he doesn’t have outside of it.

“I had this conversation with somebody last night, actually. I was booked for a sexy show. And I was like, ‘Okay, well, I’m not sexy, but Damien — yeah, Damien’s sexy!’” he says. “My drag persona, my makeup and everything, that is my gender euphoria.”

A few months after starting drag, Kylie Mooncakes (@xmooncakes) was lying in bed with her partner and posed the question: “What if I was a girl?”

“I probably would have discovered it regardless,” she says. “But drag definitely was an aha moment for me.”

Kylie, who uses she/they/he pronouns, loves Seattle, and Seattle loves her right back. She says the community is full of joy and support, something she was especially grateful for last October when she received a positive HIV diagnosis.

“I’m so lucky that I got to receive that diagnosis without feeling a lot of stigma, or a lot of other crazy complicated feelings, because I’ve had so many loved ones who have experienced the same thing who have been willing to share their story and their voice about it,” she says. “Same with transness. I feel like a lot of people in our scene, too, are really supportive of the trans community, and there’s a lot of advocacy for them.”

“It’s a Renaissance in the drag community in Southern California, that a lot of us are actually trans people.” So says Die Anna (@yourdeadsister), who, along with fellow queens Bibi and Muñeca (@munecatheedoll), represents the vibrant trans drag scene in LA.

“Honestly, when I started drag, I didn’t really want people to know that I was trans,” says Die Anna. “So I would just go around, like, really, really dark outfits, like, all black, studs, really aggressive makeup, so people would not be looking at me, they’d be looking at the product that I’m producing. And the more I became comfortable with my trans identity in and out of drag is when I was just like, ‘Oh, I can be pretty. I can do more things that bring attention to my person.’ It’s been a really fun experience.”

Bibi echoes that sentiment, saying that transitioning has made drag far more meaningful for her.

“I feel like everything feels more special and more sacred, because I think I’m more aware of what it means to me now. Because before it was just me trying to not look like myself, but now I am looking like myself, and this is who I am,” she says.

Transitioning, of course, is not always a smooth process. Though Muñeca is still in the early days of her medical transition, she says being in drag has sometimes caused her gender dysphoria.

“Putting on pads was kind of bad. Like, it kind of put me down, because in the end they weren’t real. Or like, washing off the makeup, there was always this feeling left behind,” she says. “But in a way they go hand in hand, because they let me explore my femininity.”

And now that Muñeca is out as a trans woman, she’s feeling the support of her LA community like never before.

“There was a lot of solidarity from my trans sisters. These are people that I knew prior to even knowing myself I was trans,” she says. “That was the biggest one for me, was trans women that I already knew, and just that bond.”

The Specter of “Drag Race”

Representations of trans people and of trans drag artists specifically are fraught in modern America. It’s near impossible to avoid the looming shadow of “RuPaul’s Drag Race” when talking about drag and pop culture — the reality competition show is, without a doubt, the most mainstream representation of drag, having won 19 Emmy awards and launching seven international franchises.

But for a show with such a large audience (the most recent season’s premiere garnered a whopping 1.3 million total viewers), its portrayal of trans people is, well … lacking.

“I don’t like ‘RuPaul’s Drag Race,’” says Damien. “I don’t like how big in pop culture it is, mainly because of the fact that RuPaul has openly been a transphobe.”

It’s true: RuPaul’s relationship with the trans community is strained to say the least. In a 2018 interview with The Guardian, the reality host made waves saying that he would “probably not” allow a trans woman on the show who had medically transitioned. “Drag loses its sense of danger and its sense of irony once it’s not men doing it,” he said, which, besides entirely ignoring the existence of kings, is patently untrue and transphobic. He received major backlash and walked back the statements, but the damage was done — RuPaul’s transphobia seemed irredeemable.

Enter Gottmik, the first trans man to compete on “Drag Race,” and the first post-op trans person to compete on a regular season of the show. When Gottmik sashayed into the werkroom this January for “Drag Race”’s 13th season, many saw it as a breakthrough in trans representation on the show, and a sign that RuPaul may be coming around to the right side of history. Many trans people were less convinced.

“To see an out post-op trans man on the show really shows that trans men can do feminine drag,” says MAUVE. “It’s cool to see him there. But ultimately, like, he’s not any different than any other twink that’s been on ‘Drag Race.’”

Indeed, Gottmik is a skinny, white, fashion-forward boy who presents as a woman in drag, not unlike many other contestants who’d been on the show already.

“It’s just a little disheartening, and this goes for anything, not even just drag, that the trans representation is white and post-op. And that’s not fair,” says Damien. “There’s a lot of trans people that I know that are of color and, like me, are pre-op, or are not even on hormones or anything like that, because that’s just not everybody’s journey.”

It’s also very telling that Gottmik is, at the end of the day, a man who transforms into a woman via drag.

“It’s them trying so hard to keep that narrative of the transformation aspect of it all,” says Muñeca. “We want a trans woman. Period. On one of the newer seasons, not on All Stars, you know? And Gottmik was, okay, cool. We have representation for the trans community, but where are the trans women?”

All this is not to say that Gottmik is not an excellent drag artist, or that she is not good trans representation — rather, it’s the hope of many, including Irregular Girl, that Gottmik’s run on the show will open the door for more diverse trans voices in the future.

“I really hope that it continues on with the show, that we’re able to bring in more trans girls, and to see more girls that are surged up, not surged up, that are competing in this competition that should just be about drag, but somehow has become about anatomy,” she says. “That’s just, like, not the tea.”

The Future of Trans Representation

Where do trans drag artists want to see themselves represented moving forward? It’s simple: everywhere, and with equal opportunity.

“I wish a lot of us didn’t have to work as hard in order to prove ourselves because they’re going to book a cisgender queen over a king just because of some stigma or something, or they’re going to book one trans person at a show so that they can look like the ally of the year,” says ShowPonii. “It’s frustrating. And I just want us to be able to have these opportunities to show what we can do.”

Beyond making space for trans drag artists, it would be ideal for there to be no need for special treatment, says Bibi.

“In my perfect world, there wouldn’t be a differentiation,” she says. “We would just be able to get hired. We would just be working day to day, no questions asked. We’re not having to out ourselves or talk about our private parts or anything for people to understand us.”

At the same time, special attention must be paid to trans drag performers of color who are particularly marginalized for their intersectional identities, says Kylie.

“I want more representation everywhere, not just on ‘Drag Race,’” says MAUVE. “I want us to infiltrate everywhere. That is the Gay Agenda for me.”♦