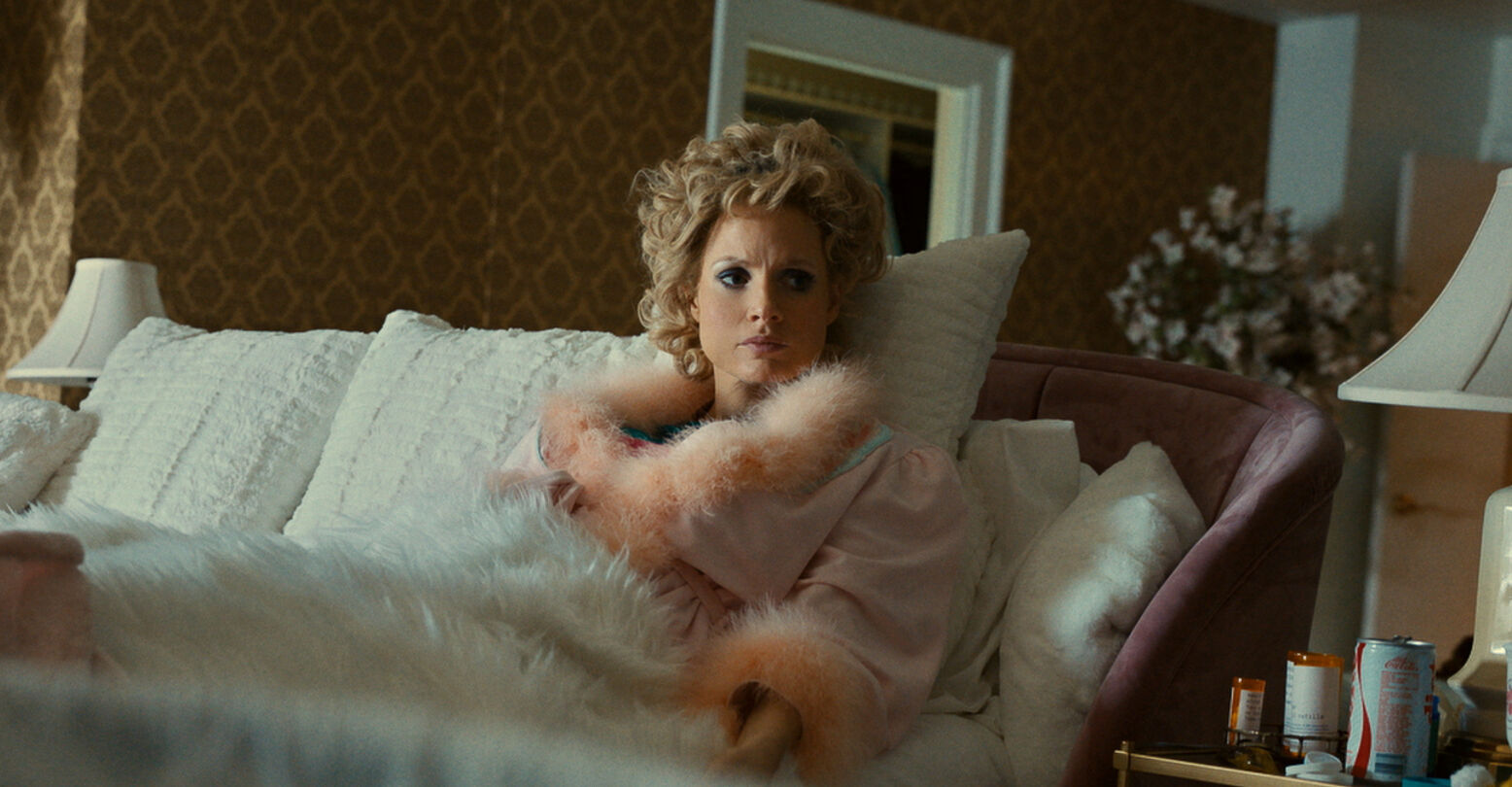 There’s a scene well into 2021’s The Eyes of Tammy Faye that presents the main character as a staunch queer ally. The film, written by Abe Sylvia and directed by Michael Showalter, is a portrait of the Christian evangelist and television personality Tammy Faye Bakker¹. The scene takes place in the 1980s just as Tammy Faye (played by Jessica Chastain) and her husband Jim Bakker (Andrew Garfield) were starting to make a name for themselves as TV preachers. It shows her taking on Jerry Falwell (Vincent D’Onofrio), another televangelist and pastor of a megachurch. At a gathering of Christian leaders, the famously homophobic Falwell is spouting some bullshit about queer people and our threat to society. As the men shush away the women, Tammy Faye sits at the guys’ table and stands up to Falwell. She calmly and confidently says that queer people are just people. It’s a simple line but the way Chastain delivers it and how the shot is composed makes it clear that this is a pivotal moment in the film.

The Eyes of Tammy Faye is not a two-hander about the rise and fall of the Bakkers and their 1990s scandals that led to the downfall of their empire, as some might expect. It’s a sympathetic character study of Tammy Faye, told completely from her point of view. “She’s the star. The most interesting character, “ explains screenwriter Sylvia in a phone interview. “There’s nobody else in that orbit whose point of view I would want to get into frankly.”

The film is based on the 2000 documentary of the same name, directed by World of Wonder’s Fenton Bailey and Randy Barbato. This adaptation, however, starts at the beginning, clarifies Sylvia.  “The documentary was told from the point of view of a few years after the fact. So it had the luxury of  being able to contextualize and place into context Jim and Tammy’s place in the history of televangelism.” He adds, “Our movie says, ‘let’s watch them experience these things in real-time without the awareness of the ending.’”

The film’s portrayal of Tammy Faye as an ally for our community was something to wrestle with.

Healthy skepticism of religious organizations, especially one whose leader was convicted of fraud, comes naturally to most queer people. So the film’s portrayal of Tammy Faye as an ally for our community was something to wrestle with. Sylvia, who identifies as queer, had no such qualms. “She was an advocate for us, a trailblazer within the religious community,” he said. “When the right was courting evangelicals, Tammy Faye embraced us and was a lone wolf in doing so. I think that it shows incredible bravery on her part.”

Perhaps even more swaying is another pivotal scene later on in the film. The Falwell bit was just a setup building up to an emotional highlight. The film re-creates Tammy Faye’s most famous interview in the many years in which she had a television platform. It was 1985, the height of the AIDS crisis, a time when queer people and especially gay men were looked at with even more contempt than before. “What was taking place in secular media was fear-mongering that aligned with people’s biases about gay people,” explains Sylvia. “If they were scared of us before, they’re really scared of us now.” Tammy Faye chose to feature Steve Pieters, a gay pastor who has AIDS. Sylvia calls the interview “a seminal moment in queer history.” He continues ”She brought onto a Christian station, a man with full-blown AIDS, who still loves Christ. Steve Pieters is very much alive and with us. And said look at this man, I love him, and he is deserving of our love and faith and charity. He is a human being. That was remarkable for anybody to do at that time, let alone a televangelist.”

“She was an advocate for us, a trailblazer within the religious community.”

Sylvia says that the scene, which you can see exclusively here, was recreated “verbatim” for the film. “I’ve done some editing here and there, but those are their exact words.”

As you can see, it packs an emotional wallop. The film’s goal is to firmly and squarely put the audience in Tammy Faye’s corner, and with that scene, it succeeds. What distinguishes the film is Chastain’s performance and her total commitment. Obviously, Tammy Faye was inherently an exaggerated personality. Chastain leans into that trait in her performance. She doesn’t shy away from going big or playing up Tammy Faye’s performative flamboyance. From the very first moment in the film, she’s all fluttering eyelashes and constant hand gestures. There’s no way to be subtle when you are playing Tammy Faye and that’s why she succeeds. It’s a bold, audacious, and funny performance.

What will endear this film more to queer audiences is how camp it is. Sylvia compares Tammy Faye to another queer icon, saying: “Edie Beale doesn’t know she’s camp in Grey Gardens. Has no idea, and that’s why it’s funny. We have a nose for when someone is being foolish for attention and doesn’t know how fabulously wrong they are. That’s the key to the queer fascination with camp figures.” Chastain has no fear of playing up the ridiculousness of Tammy Faye, but she also reveals her heart. ♦

¹We refer to her as Tammy Faye going forth to distinguish her from her husband and because a character as big as that deserves a unique moniker.