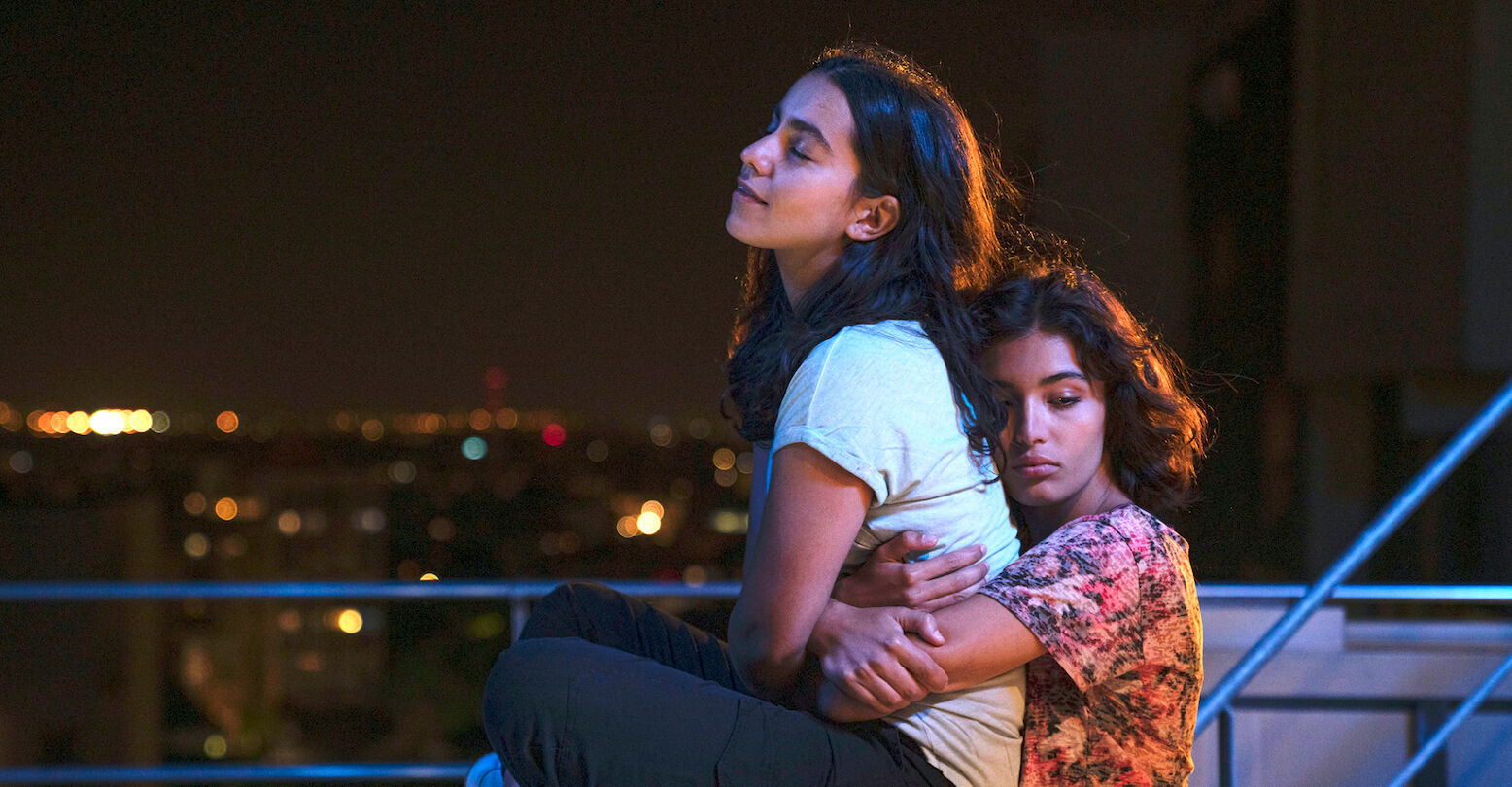 Everyone loves a good rivals-to-lovers arc, don’t they? After all, what’s gayer than unresolved tension boiling over and letting your guard down, especially when coupled with the angst that is female adolescence?

Besties (Les Meilleures) follows Nedjma as she is reluctantly dragged by her friends into an escalating rivalry with another group of girls. However, Nedjma is secretly harboring feelings for one of her supposed enemies, the incredibly femme Zina. Nedjma must balance keeping up appearances for her friends with her burgeoning desire, as well as protecting her younger sister Samar. The film takes a West Side Story-inspired plot and transposes it onto a Franco-Algerian suburb outside Paris, de-escalating the stakes and creating a far more intimate exploration of how girls balance the demands of growing up.

The film takes a West Side Story-inspired plot and transposes it onto a Franco-Algerian suburb outside Paris.

It is a film about female posturing, from Nedjma’s stem stoicism to the lies young women tell their friends and the role social media plays in projecting a particular self-image out into the world. We see the pressures develop around an increasingly online adolescence, creating increased scrutiny and policing of other women on their clothes, sexuality, and behavior. The film’s primary focus is on the cruelty young women inflict on each other and the ways in which social media have become a form of social surveillance. The girls in this film are incredibly clever in the cruelty they enact on one another, well aware of how to use the internet to terrorize each other effectively.

Lead actress Lina El Arabi perfectly captures Nedjma’s bravado and swagger, right down to letting a pretty femme nearly destory her social life. However, it is the subtlety of her performance that brings the film home. Nedjma, like all the other girls, is a victim of her circumstances, but seeks to rise above them, both for herself as well as due to the loyalty she feels towards her sister, even after a rift between the two appears. It’s her ability to balance multiple conflicting desires that ultimately helps her come of age as a woman and as a lesbian.

It would be impossible to finish this review without mentioning something about the stellar filmmaking. The cinematography in this film is gorgeous, with an incredibly rich palette of colors, and some incredible low-light photography. Besties is another solid entry into the lesbian coming-of-age genre and a thoughtful meditation on the politics of being a woman and overcoming social expectations.

If you’ve been hitting the lonely hearts line a bit too much on a long country drive, don’t fret. Just grab your Stetson, put on the tightest pair of jeans you own, and start blasting Orville Peck’s cover of “Smalltown Boy,” because Lonesome is the dreamy sad gay cowboy movie you didn’t know you needed.

Lonesome is about Casey, a modern cowboy who drifts into Sydney from Australia’s west without any money to his name, an unknown past, and the promise of sex, fame, and fortune. He quickly hits it off with Tib, a Grindr hookup-turned-friend and lover who provides him with the opportunity to escape his hometown trauma and build something for himself in the big city.

The film plays like a Steinbeck novel, with Casey traveling to take odd jobs with Tib to make ends meet, enduring the longing eyes of forlorn housewives and contemptuous men. There is also subtle political commentary lingering in the background. Lonesome is a proper update of the cowboy mythos to a modern context, fully aware of its metaphorical potential. The cowboy represents a man chasing the frontier, unable to be satisfied in either the wild or the domestic sphere. He is only satisfied in the rough middle ground where he can prove his masculinity, or in the case of this film, lots and lots of aggressive sex. Likewise, like many a good cowboy tale, Casey’s past eventually does come back to wreak havoc on the little life he’s built, forcing him to decide where he belongs, and what kind of man he wants to be.

The film plays like a Steinbeck novel, with Casey traveling to take odd jobs with Tib to make ends meet, enduring the longing eyes of forlorn housewives and contemptuous men.

While many of the plot points have been done before, it is the texture of the film that makes Lonesome worthy of your time. The shots are grainy and oversaturated, color bursting from every still. In particular, the film often employs extreme wide shots with Casey transposed against a landscape, dramatizing his loneliness in gorgeous technicolor with a style borrowed from films like Beau Travail. These shots are accompanied by a gorgeous synth-based score, further adding to the hazy melancholy the film seeks to manifest.