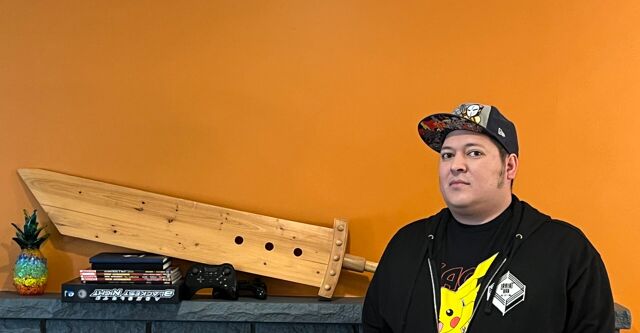 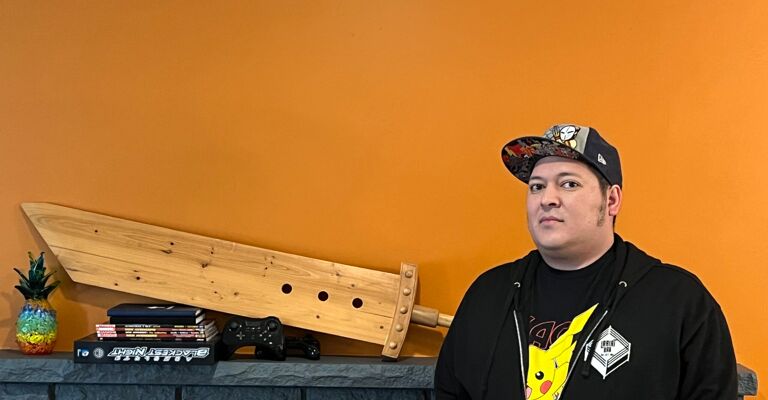 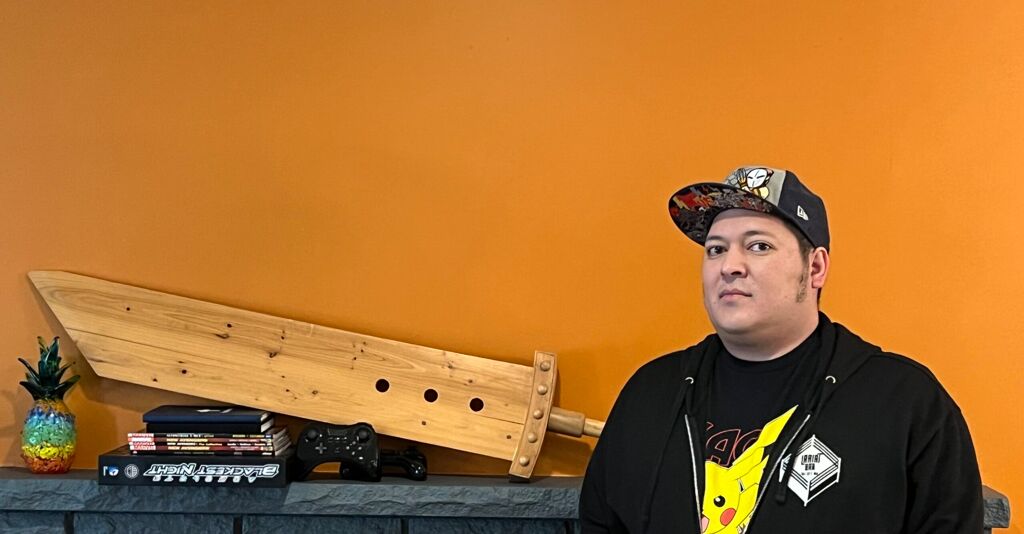 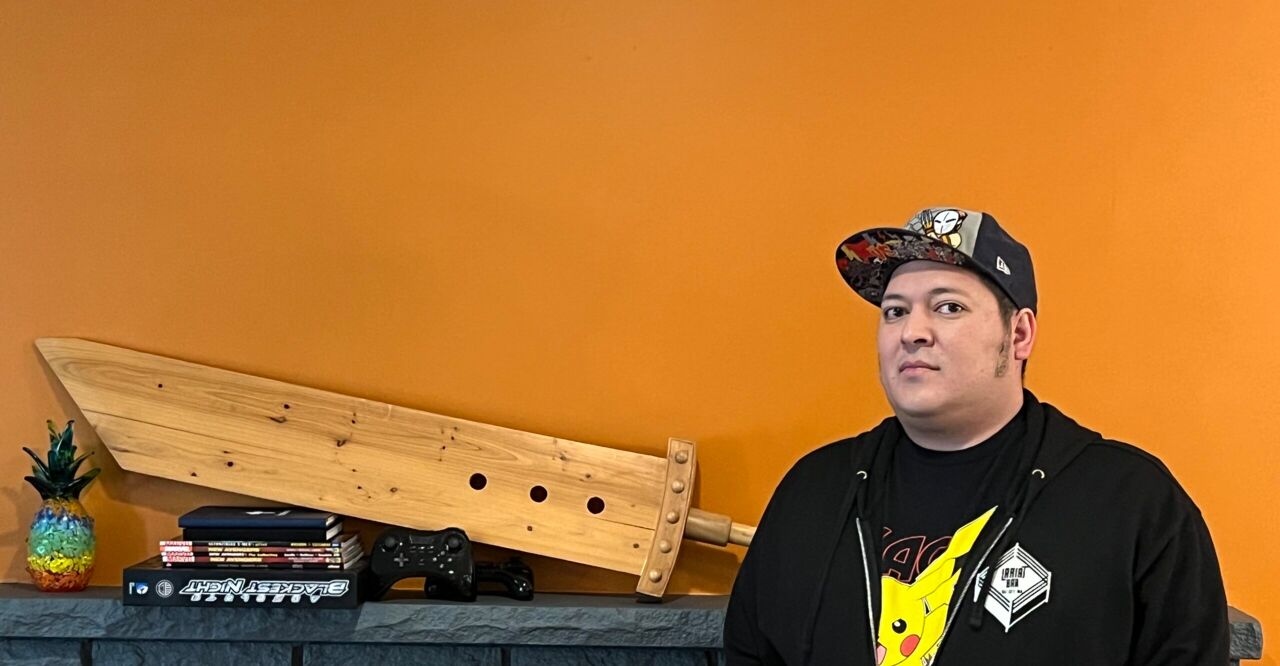 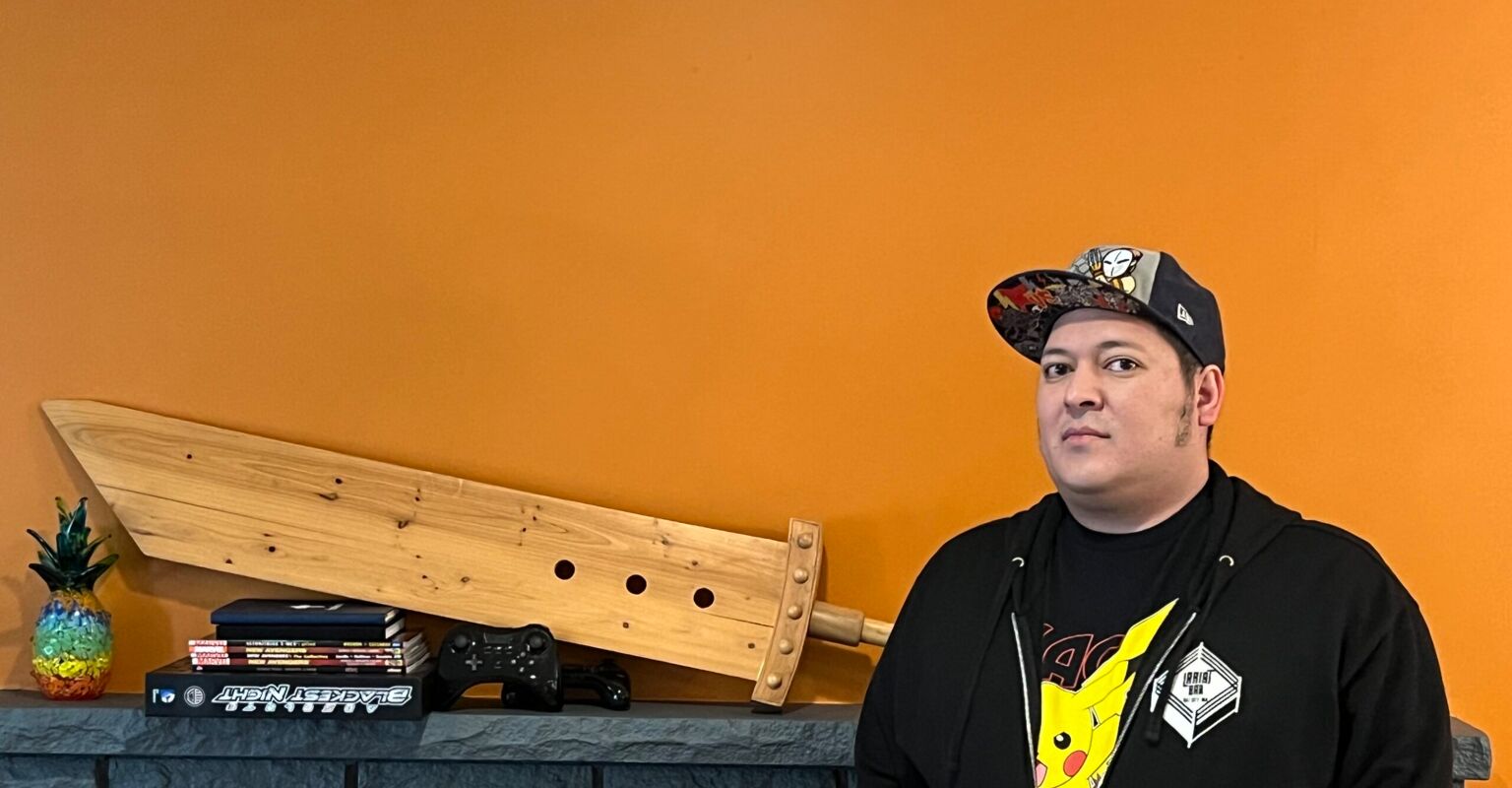 It’s no secret that queer folks can be absolute nerds. When there’s so much toxicity to navigate in everyday life, many of us jump at the chance to escape into fantastical quests and larger-than-life adventures. But the online communities surrounding that side of the culture are a different story. After all, it’s 2022, and we’re still debating whether Black hobbits can exist. That’s why queer-specific geek communities can be a real bastion for LGBTQ+ genre fans.

Groups like that don’t form on their own. They require set-up, promotion, constant engagement, and vigilance to ensure safety. But when Alex Garcia, organizer of the popular Facebook community LGBTQ Gaymers, started his first group in 2009, he had none of that in mind. He was just trying to make friends. “I started that group out of just me and my best friend. We wanted to meet other LGBTQ nerds,” he tells INTO. “We didn’t really know anyone else like us.”

Since then, the community has grown exponentially, evolving into a whole network, Gay Geeks. The sub-communities under the Gay Geeks umbrella now range from niche topics like gaming, anime, and comics to broader hobbies like fitness and cooking. Over the years, Alex has seen members make real online connections, discovering friends, partners, and travel buddies. Now, Gay Geeks is an online powerhouse, bringing together over 150,000 LGBTQ+ nerds across 25 groups.

INTO spoke to Alex about the success of Gay Geeks, how he keeps so many spaces safe, and the advice that he has for anyone looking to start their own online communities.

How did Gay Geeks get started?

If you think back 12, 13 years … there wasn’t even gay marriage 13 years ago. Back then, if you got online to play video games, it was very toxic. It was very common that if you’re playing Call of Duty, you’re gonna be called a f*ggot or something. It was not a safe space at all.

And so my friend and I just really wanted to create a safe space to meet other LGBTQ+ nerds and make friends worldwide and be able to get together, form clans, and play games.

Did the group grow overnight or was it a gradual kind of thing?

I would say we got to maybe 30,000 members in the first year, but it grew pretty fast. Within a month or two, we were at 5,000 members. And I just remember that being shocking. I quickly realized how much it mattered to people back in 2009.

But every time we hit certain levels of growth, that comes with a bunch of other challenges. All of a sudden, you need 15 moderators. You need to have a tight-knit framework of rules for what’s acceptable, and what’s not acceptable. 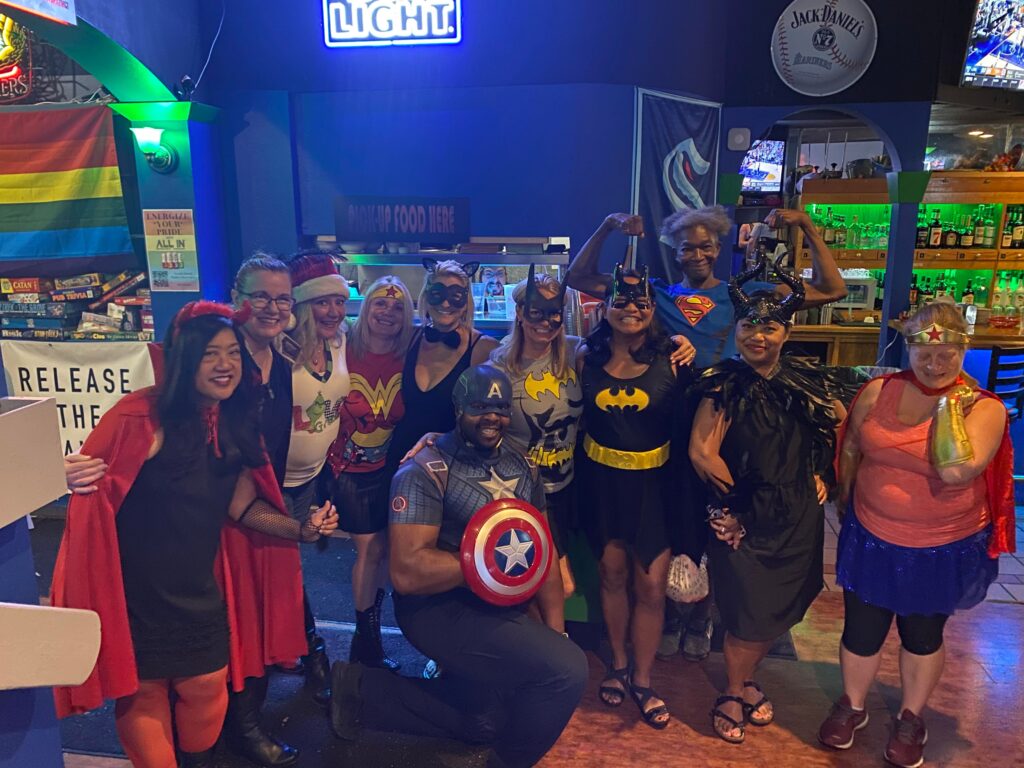 You mentioned moderators, and I was wondering how that process works. What all goes into keeping the groups safe?

It’s a struggle for sure. One bad apple, one bad comment, and sometimes the group feels like we allowed it somehow. So it does take a lot of proactive moderating. Having done this now for a while, when you start a new group, if you’re paying attention, you quickly realize who your rockstars are. The ones who are helping police the group and helping to post content. They’re very engaged. … I just reach out to them to say, ‘Hey, would you like to help us?’ It’s always an overwhelming: ‘Yeah! We’d love to help out.’ Obviously, there’s no money for running the group, so everyone just volunteers and believes in the mission and are willing to join.

What it takes is having a really strong framework of rules and guidelines, so members know that this is how we keep the group safe. These are the things we don’t allow. Because the sad thing is that since we’re LGBTQ-focused, we do get a lot of trolls. And I have to remind the group, ‘Hey, let’s not feed the trolls. Give us a moment as moderators to remove a bunch of comments.’ Then the group goes back to normal.

“People wonder why we do it—it’s literally for the love of community and having a safe space.”

We do have international members, so we try to have 24-hour coverage with moderators that take over once we all go to bed. We’ve got friends over in the UK to watch the community approve the new posts, and watch for anything that’s reported. It’s a lot of work. It’s a full-time job at times. People wonder why we do it—it’s literally for the love of community and having a safe space.

I know that during the pandemic, a lot of groups blew up online. I’m wondering how COVID affected your groups?

That’s how we went from 50,000 to 82,000. We grew so much in those two years. And because we were all stuck at home, I would do fun out-of-pocket giveaways. I would get members who are talented to do things. My friend Devin would do live trivia. He’d get on stream, and the whole group would participate. And then I would donate like a $100 gift card to Amazon for the winner that week.

And so, during the pandemic, it was the time you realized you really needed that. I spent so much time in all my groups, made so many more friends, because normally on an off pandemic year, you’re too busy working.

Do you have any memorable stories of the connections people have made through the group?

So many people met their partner. I know a couple who met each other seven years ago in the group. And now they own a massive LARPing community, and they run massive LARPing events like every week on the East Coast.

I’ve met so many people who met in the group. There was one story of a kid who lives in some tiny town in Alabama. And he thought he was the only gay guy in that town. And then because of the group, one town over—like 20 minutes away—he met his boyfriend. I hear so many stories like that. 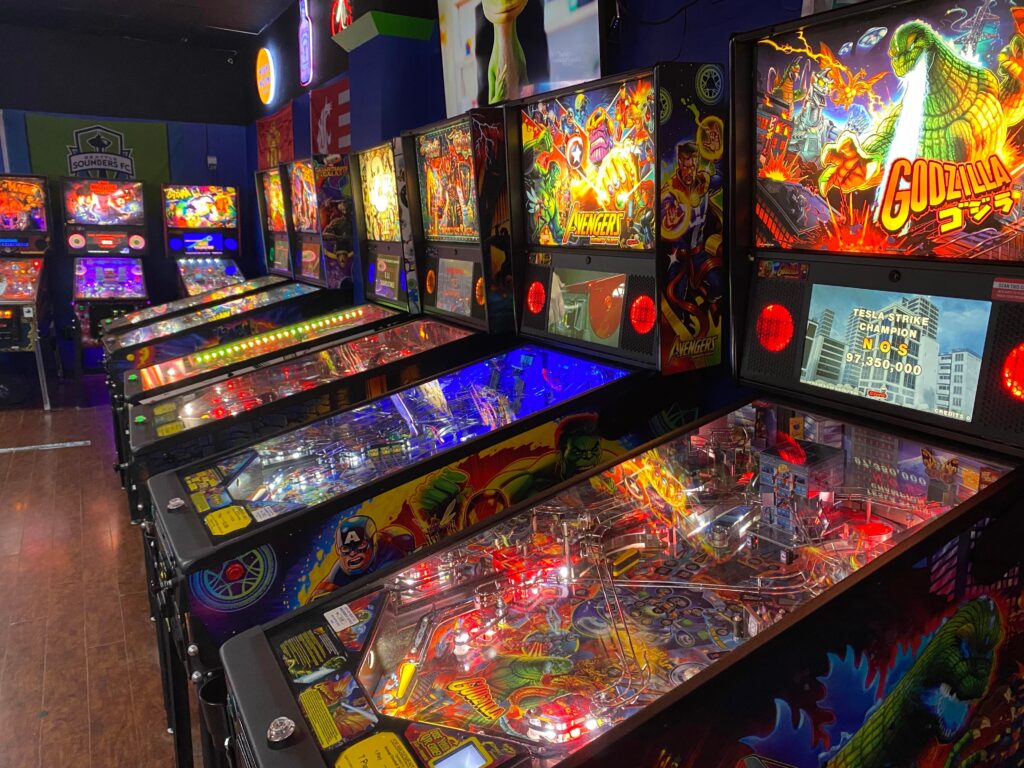 And there are those people who are like: ‘My best friend of seven or eight years lives in New York and I live in Atlanta, and we fly out every six months to hang out with each other.’ Things like that are just cool. You forget how important online relationships are sometimes. They’re just as real sometimes as in-person relationships, and many of them turn into in-person relationships.

“There was one story of a kid who lives in some tiny town in Alabama. He thought he was the only gay guy in that town…because of the group, one town over—like 20 minutes away—he met his boyfriend.”

The stories that really motivate me, though, are the ones that are like: ‘Hey, I don’t have any friends. I’m in a tiny town that’s super conservative. And this is where I find my peace. When I come home, I get on the grip, and just connect with my friends.’ And then, a lot of those people eventually move. You hear stories about how they made enough friends that they eventually leave their tiny town and go join their friends in another city.

Do you have any advice for anyone looking to start their own community online?

It is insanely challenging. So make sure you are insanely passionate about what you’re about to do. Because sometimes I spend 24 hours on it. Like, waking up, I browse the group, make sure there’s no reported posts, go through and remove people. Even one bad incident can be really bad for the group.

It’s so time-consuming, but if you’re passionate about something, definitely do it, because there are people out there who are going to be so happy you did. That passion is what will push you through all the tough times. There were events that really challenged the community to pull together—the pandemic was one of them.

You just have to be insanely like, “I’m passionate about this. I’m sticking with it.” There was a few years when I was like, “Why am I still doing this?” But then I hear an amazing story and I’m like, ‘Okay, this is why I do it. I’m gonna stick with it.’♦