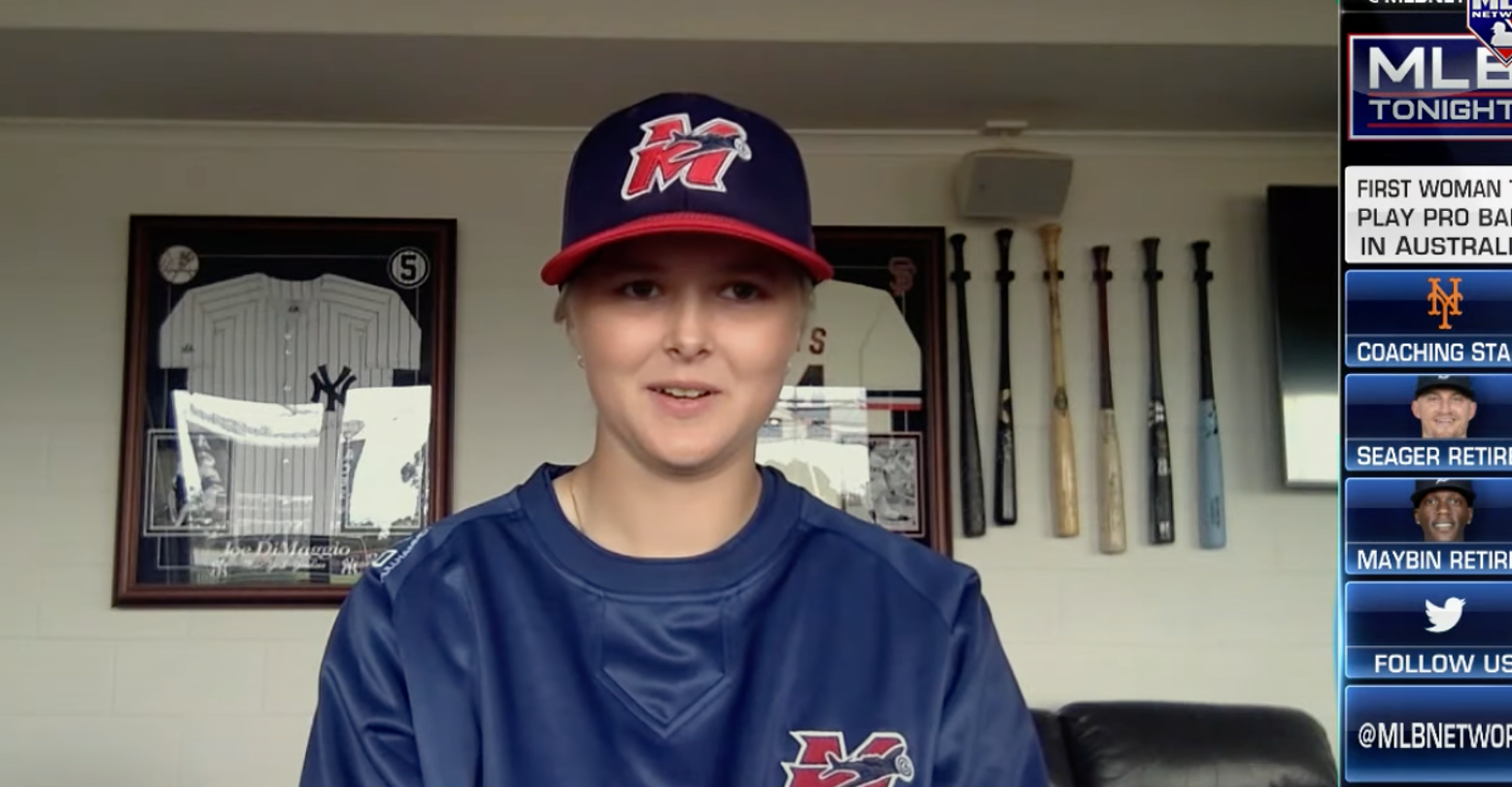 Coming in at over 6 feet tall and at just seventeen years old, Genevieve Beacom hurls a fastball that tops at 84 miles per hour; and as of Saturday (Jan 8), she became the first woman to ever pitch in Australia’s top professional baseball league.

Shining under stadium lights, Beacom made her Australian Baseball League debut with the Melbourne Aces in a match-up against the Adelaide Giants. As a seventeen-year-old girl in the male-dominated ABL, the left-handed pitching prospect spent the night standing out to fit in. Cozying right on up with the pros at Melbourne Ballpark, Beacom protected home plate by pitching a scoreless inning.

Post making history on Saturday night as the first female pitcher, Beacom spent her Monday (Jan 10) chatting on the phone with The New York Times. To no one’s surprise, her first time on the mound for the ALB was only a small peak at the beginning of a monumental career – one that was built over seventeen years and has nowhere to go but up.

Revered for a left-handed looping curveball, Beacom isn’t one of the guys – she’s better than them, and she’s spent most of her life proving it, training twice as hard to make her own space in a sport that has long since belonged to the boys. As it just so happens, Beacom throws like the girl every boy wants on their baseball team – especially if he wants to win. Knighted with respect for her skills, Beacom told the NYT about the boys she’s played baseball with all her life, “Those guys understood I have a feel for the game and that I actually can compete with them. They still do.”

The NYT grabbed Peter Moylan, the manager of the Melbourne Aces, on the phone and he vouched vehemently for the fact that Beacom is a player who lets her talent and work ethic do all the talking. Recalling the first time he saw her pitch in a bullpen session, Moylan said, “It had nothing to do with boy, girl, woman, man, whatever you call it.” The former MLB pitcher swore on Beacom’s skill alone as he claimed, “It was strictly that I was looking at what she was doing with the baseball, and it was fantastic. I wanted her on my team.”

Trusting in Moylan’s expertise as a twelve-season MLB veteran, the general manager of the Aces Justin Huber signed Genevieve Beacom to a player participation agreement. Per the paperwork, Beacom is placed on the roster of the Melbourne Aces without pay; but fear not, it’s all for good reason. Beacom negotiated to sacrifice pay as a means of maintaining eligibility for the National College Athletic Association; because this Australian prodigy has her sights set on college ball in the United States.

“College baseball is one of my big goals,” Beacom revealed to the Times. “Every baseball player wants to make it to the majors. But we will see how far the game can take me, whether that is college, minor leagues, the majors. Wherever it can take me, I’m just happy to be on the journey,” Beacom put it simply, making it clear she appeared in the offseason of the Australian major leagues for the same reason she once played t-ball – she’s just a girl who loves the game.

Still in high school, Beacom brought her unique career concerns to an adviser at a recent college fair. When she asked about baseball scholarships for colleges in the United States, Beacom recalled that the advisor gave the atypical baseball player a sadly typical response, “He turned to me and said: ‘There’s no baseball scholarships for girls. They play softball, they don’t play baseball.”

For Beacom, a teenage girl, the advisor was just another voice of doubt. Luckily, she tossed him in with the rest of the skeptics – plenty of whom Beacom has converted into wholehearted believers. “But he didn’t know me,” she explained, “He didn’t know baseball is my sport. It definitely happens a lot to most girls, which is quite annoying because a lot more girls are playing baseball now, which is awesome to see.”Whether or not Beacom will be allowed to play collegiate baseball in America is up to the NCAA.

Given her appearance on a handful of impressive rosters: from the U16  junior baseball team of Victoria to the Melbourne Aces, the NCAA would be remiss to deny Beacom an opportunity to practice her craft playing college baseball in the US. If Beacom doesn’t end up playing college ball in the US, she can always choose to follow through with the independent US  minor league teams who have reached out to the Aces general manager, Huber.

Huber, a former MLB catcher himself, even hopped on call with the NYT to celebrate his signee’s first official night under Melbourne Ballpark’s bright lights. When it came to her show-stopping performance; one that prevented the Adelaide Giants from scoring for an entire inning, Huber set the scene, “You could see it on the faces of the batters the other night, and in their approach. It seemed natural, like, ‘We’re all here playing baseball and Genevieve is pitching because she can get outs.’”

As Huber explains, the fact of the matter is laid out every time Genevieve Beacom hits the field: ‘she can get outs.’ So she does.