Baked mac ‘n’ cheese, fried green tomatoes, goat cheese grits, buttermilk fried chicken, and a sweet tea with lemon – this was my exact first order after landing in Greenville and heading to get fat (eat).

There are two things I love about the South, the food and the people. With the latter, I know that deep down inside, that person being extra nice to my face, most likely doesn’t like me, or wouldn’t accept me for who I am, but damnthere’s just something about the constant exchanging of pleasantries that is so alluring to me. Southern hospitality is real and it’s so needed everywhere else in the world.

By the way, the restaurant that contributed towards my future obesity wasTupelo Honey, and it’s located right in downtown Greenville, and most definitely worth a visit. 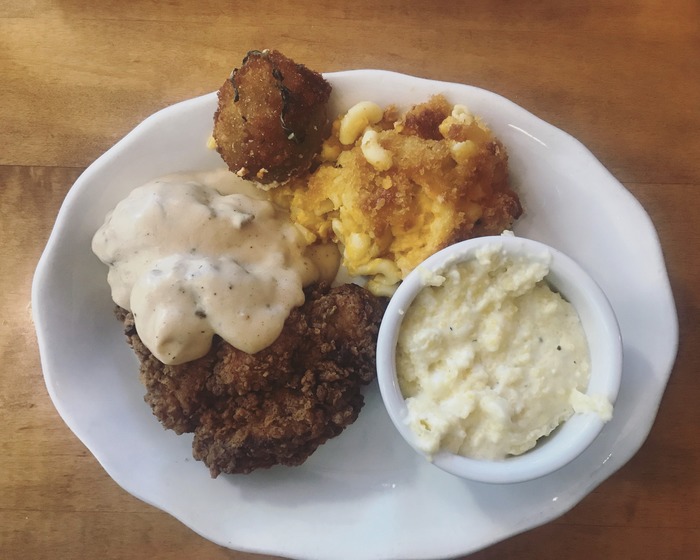 I flew down to South Carolina for a short two-night trip to spend time with a fella and after stuffing our faces at Tupelo Honey, we walked around downtown, checking out the prime photo spots. You know, the two main locations you see when you type “Greenville” into Google. My photos didn’t turn out as amazing as the ones online, but they worked.

Greenville is a quaint city, and I’m looking forward to getting to see more of it, but for this trip, we were determined to get the hell outta town, and head for the hills, well, mountains. The initial plan was to head to Asheville since it’s pretty close by but when I was presented with the opportunity to head to one of my bucket list destinations instead, I jumped (and internally screamed with joy) at that chance. 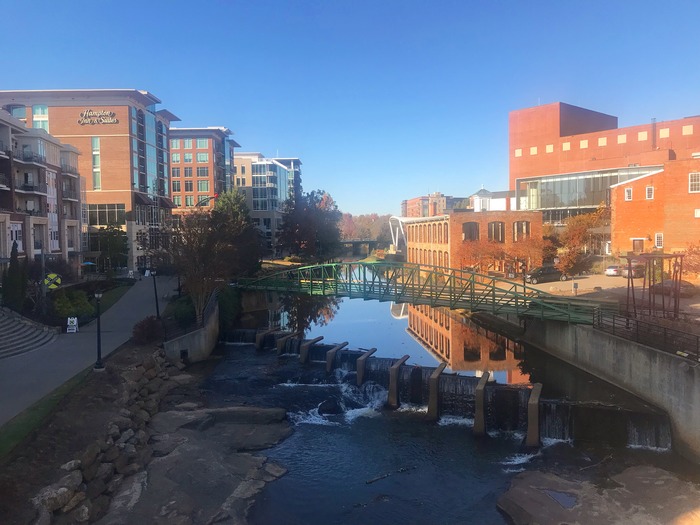 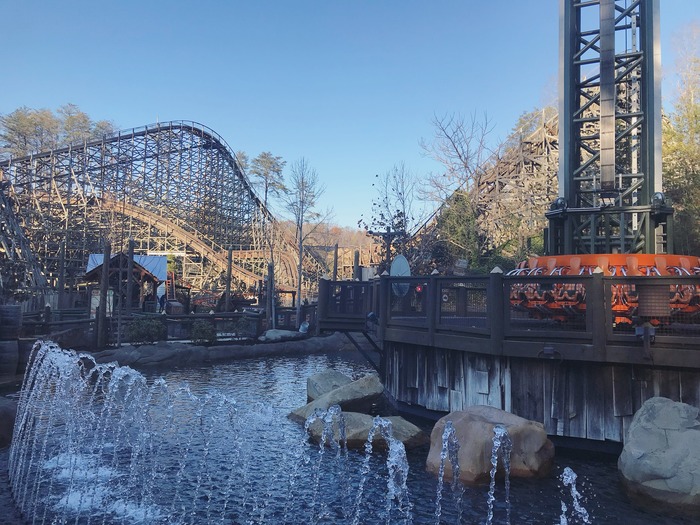 We quickly packed up our stuff and hopped in the car and began to drive straight for the mountains. Pigeon Forge, Tennessee was in our sights and the under three-hour drive was made relatively easy with the assist of non-stop Christmas music. Thankfully, neither of us had any issues with back-to-back holiday classics. I didn’t know anything about Pigeon Forge beyond it being the home of Dollywood (bucket list), and as I heard more about it on the drive out, I was even more confused as to what I was about to encounter.

How to describe Pigeon Forge? Kitsch AF, might be the best description. I was unprepared for the amount of randomness I saw once we got there. If the worst part of Vegas and Times Square had a baby in Branson, Missouri, the end result would probably be Pigeon Forge. Don’t get me wrong; I loved everything about it, mostly because I wasn’t expecting it.

We managed to rent a room at the newMargaritaville Island Hotel, becausego big or go home. It was located right next to Paula Deen’s Family Kitchen restaurant that had a massive billboard of her face on the wall of the building. At this point, I was in a Twilight Zone moment and couldn’t get enough of it. 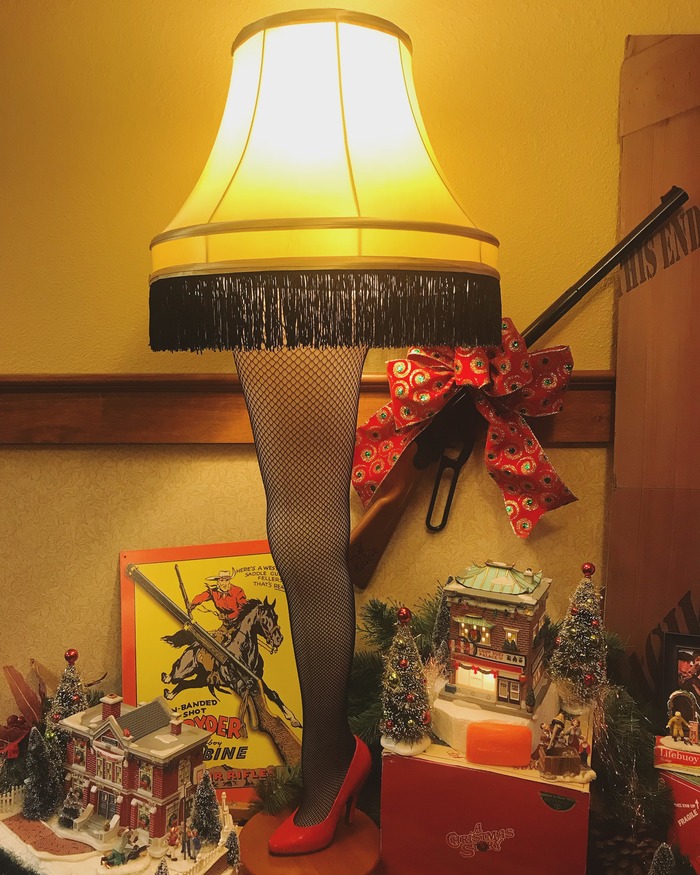 The next morning, I insisted on a pit stop. I had learned the night before of a hotel that was Christmas themed 365 days a year. How could I not see this place?

The Inn at Christmas Place is a privately owned hotel that prides itself on being full of holiday cheer, all year long. Although, as the bellman that showed us around pointed out, they can say “Merry Christmas” and “God Bless” because a big corporation didn’t own them, so really, they spread Christmas cheer, all year long.

The thing that made me love the hotel wasn’t the fact that each room came with a Christmas tree, or that Santa himself was on property pretty much all the timeit was the display on the 4th floor that was dedicated to the greatest Christmas movie of all time, A Christmas Story. Seeing that leg lamp in all its glory really gave me all the feels. “It’s a major award!” 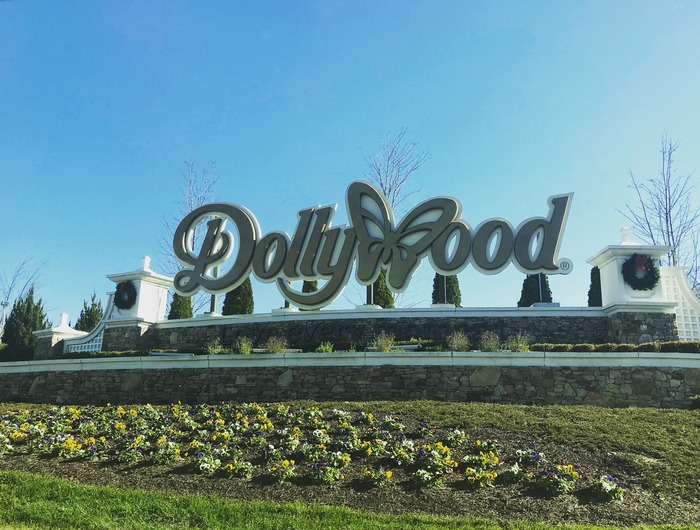 SinceDollywood didn’t open until 2pm, we drove just a few short miles over toGatlinburg, a German-influenced village that continued the kitsch AF theme of Pigeon Forge, on its main drag, but added in old-school European architecture.

We walked around a bit and I snapped some photos of offensive t-shirts (I stand for the flag, kneel for the cross) and stumbled uponOle Smoky Tennessee Moonshine, where they were offering tastings. I’m not much of a moonshine aficionado, but I’m pretty sure this “moonshine” was not the real backwoods booze. But, after tasting 13 different varieties (flavors), I wasn’t going to fault them.

The stuff was pretty powerful and most of the flavors weren’t half bad. There was one blue bottle that contained the highest proofed and unflavored moonshine, which made the watermelon and salted caramel sorts taste more like candy. The couple hours we spent in Gatlinburg were great, but since it was getting closer to that magic two-o’clock hour, it was time to drive to Dollywood. 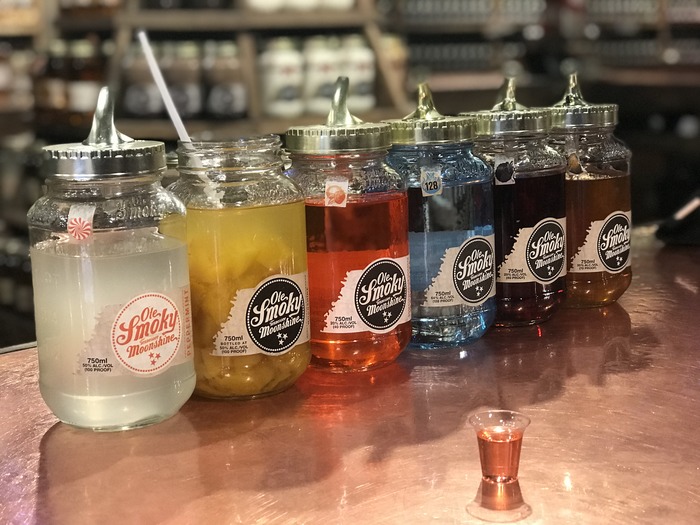 So for those living under a rock, Dollywood is a theme park owned by miss Dolly Parton, and it’s about as country as can be. Inside there are lots of shows and performers, museums and memorabilia, roller coasters, and, of course, some of the best eats in the vicinity.

The park wasn’t very crowded when we got there so we ran straight for the all you can eat holiday buffet at Aunt Grannies. Logical folks might have gone towards a lineless coaster, but we went for the fried chicken. After another gluttonous meal, it was then time to try out the rides. Dollywood is home to a new wooden coaster that has the fastest recorded speed (73 mph) for any wooden roller coaster ever – It. Was. Awesome.

Throughout our time at Dollywood, I smelled this sweet smell of cinnamon in the air, and once I learned it was the famous cinnamon bread atThe Grist Mill I smelled, I insisted we try it out. A loaf or two may have been purchased, but there are no witnesses or receipts. 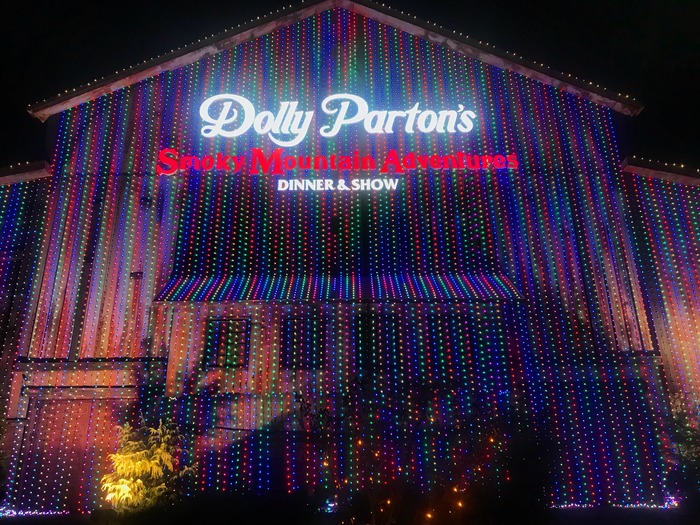 Another bucket list item had been checked off the list, and honestly, there’s nothing bad I could say about Dollywood. It was clean, friendly, and a lot of fun! The shows were all Christmas themed for the holidays and some had some religious undertones and moments, but it comes with the territory, and I knew exactly what I was getting myself into.

For the time I was there, I just embraced the gospel and went with it. On the way out, I managed to find the gayest t-shirt with Dolly’s face on it while we were shopping for souvenirs. The woman who sold it to me pointed out that her son had bought one as well and had made a pillow out of it – which was probably her way of telling us that she was ok with gay. Or maybe her son just really likes pink, glitter and Dollywho knows.

Politically, the south isn’t my favorite place. A lot of people who live there don’t align with my views or values. That being said, it’s still one of my favorite places in America. The history, the architecture, the kindness (both the real and the fake), the food, and, of course, the accents. It’s not for everyone, but that’s why we choose to live where we live and we visit those other places that make up the rest of the world.

The Smoky Mountains region and the states that belong to it are some of the most visually stunning areas of our country and deserve a visit. Plus, Dollywood is there, and well, we can only hope that more and more people who live there resonate with Dolly’s famous lyrics, “And I hope life treats you kind, and I hope you’ll have all that you ever dreamed of.”