The beats pulsing from techno music force the walls to shudder as smoky air dances through green support beams in the underground space. Dim stars seemingly sway across that dark dancefloor, but these are the cigarettes. Everyone is smoking.

This is Horoom, a secret underground queer rave in Tbilisi, a city that is known for its homophobia. It is a city that has a thousands-strong, anti-gay march on its main avenue every year. It is the capital of Georgia, a country where an estimated 91.5% percent of Georgians believe that homosexuality will never be acceptable, according to a 2009 study by the Caucasus Research and Resource Center.

This makes Horoom, a secret queer monthly rave, a radical space for queer people. It’s one of the only places in Tbilisi where queer people can express themselves and be safe.

“This is a place where you can be who you are. You can dance and no one will kick you,” says Beka Gabadadze, a young queer activist.

Horoom is located in an underground club in what used to be a Soviet era swimming pool. Looming over what used to be the edge of the pool is a DJ’s booth, the DJ himself is obscured by the flashing lights and fog, but the heavy techno is omnipresent.
Outside, people smoke cigarettes away from the noise and in slightly clearer air. To Gabadadze this is his favorite part of Horoom.

“There are many talks outside of the club,” he says excitedly, “Before, we [the queer community] didn’t have any place to interact outside of dating applications.”
Horoom is the first event of its kind in Georgia. Before Horoom, outside of NGOs, queer people had no safe places to meet, let alone have fun. Even to leave the house if you are gender non-conforming is difficult in Georgia. It’s part of what makes the rave such an important place for the LGBTQcommunity.

The raves are completely secret. In order to get in, you have to contact the organizers, who will then check your Facebook to make sure you are who you say and that you have not expressed homophobic opinions. They then send you a QR code that functions as a password. Once you arrive, there are two hulking bouncers in front of a metal gate. You give them the QR code and they check it. Only then do they let you in. When you first make your way in it does not feel at all like a rave. You have to walk past two gates with heavy security before you even begin to hear the music.

The security is necessary though. The second time that Horoom held an event, a right wing activist found out about it and rallied up around fifteen people who hurled abuse at the people entering. It was a minor disturbance and one that security very quickly took care of, but it showed why security is important. 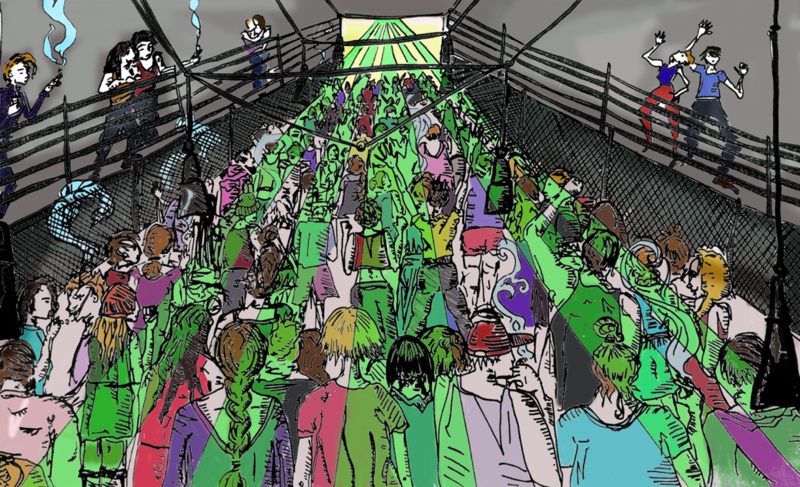 One of the main reasons that Horoom was founded was to give queer people a safe place to interact and meet each other. Tornike Kusiani, a queer activist and one the of the founders and organizers of Horoom, says that they were inspired by the Stonewall riots for LGBTQ+ rights in 1960s New York. Not because they believe that will Horoom will lead to riots, but because they think it shows how nightclubs can be a spot where queer people can meet and unite.

This is especially important now in Georgia. There is a rising anti-LGBTQ+ wave, which activists say was inspired by a similar wave in Russia. “LGBTQ+ issues and anything more or less progressive that is connected to sexuality is seen as an agenda coming from the West. It is basically how Russian propaganda echoes in Georgia,” says Natia Gvianishvili, the director of Women’s Initiatives Supporting Group (WISG), a Georgian rights group.

The Russian state banned “gay propaganda” in 2013 and since then Russian media has regularly claimed that LGBTQ+ activists are part of a foreign agenda attempting to destroy Russian traditions. This type of rhetoric has been readily picked up by the Georgian Church and many right wing politicians.

Gvianishvili thinks that both politicians and the influential Georgian Orthodox Church use homophobia is an easy way of gaining popular support and is often used to distract from endemic problems in Georgia.

“Aggression and frustration are accumulated in society because we are a poor country, because social issues are not solved, and because the government keeps feeding us lousy promises. That aggression is being used by government officials and the church for their own purposes,” she says.

“They find a target, and they channel this aggression towards that target. Usually the easiest target is LGBTQ+ people, because we’re quite a conservative society.”

This manifested violently in 2013 when a mob of thousands led by the Georgian Orthodox Church attacked a small group of LGBTQ+ activists demonstrating for the International Day Against Homophobia and Transphobia. Dozens were injured. The crowd shouted insults at the LGBTQ+ people and hurled rocks at them as they tried to escape in buses. One priest took a chair and smashed in through the window of a bus. At least 28 people were seriously injured.

Since then the Georgian Orthodox Church has used the International Day Against Homophobia and Transphobia as a rallying point for homophobia. The Patriarch declared it “Family Purity Day,” and every single year, thousands march down Tbilisi’s main avenue to protect the sanctity of the family from “gay propaganda.”

And on a daily basis, using words that are associated with queerness is dangerous.

“I was walking in the street with my my partner and a man attacked us because he heard us using the word ‘heterosexual’ in our conversation,” says Kusiani. The man thought that if they knew what the word “heterosexual” meant then they must be gay and he pushed and kicked them for it.

All of this seems very far away in Horoom. On the dance floor, people come in and out of focus through the smoke. Boys with their mouths smeared in lipstick swirl by laughing, two girls make out in a corner, at the front of the room right by the DJ booth a trans woman sways back and forth mesmerized by the music.

But in another way, it is at the heart of Horoom. Outside of the club conversations about what it means to be queer are happening. Queer people are seeing each other in the thousands. Horoom is the site of drag shows and performance art – and each time it is growing.

“Through Horoom there will be a stronger, united community,” says Kusiani.

He says that already in Tbilisi, Horoom has almost become a secret word for queer. “If you meet someone who you think might be queer, you ask them whether you saw them at Horoom,” he says. It acts as an identifier, a code in a place where being publicly queer is simply not an option.

Even Kusiani himself is not fully out to his family. He explains that in Georgia, coming out publicly would not only have serious consequences for him personally, but for his entire family. “There would be aggression,” he explains, “Both verbal and physical.”

Even if coming out publicly is not an option for most people, coming to terms with yourself within the queer community is. Kusiani thinks that Horoom, because it is a meeting place for so many queer people, is helping with that.

“Because of the queer soul of Horoom, a lot of people who have issues are more comfortable with their identities now,” says Kusiani, describing how a friend of his who had always denied being queer had recently come out to him after meeting him a few times at Horoom.

Kusiani sees a future where Horoom is part of the foundations of a unified and thriving queer community.

“I want a stronger community in Georgia. I want people to be active and reflect more. I want more activists,” he says.